Well Ill Start it off 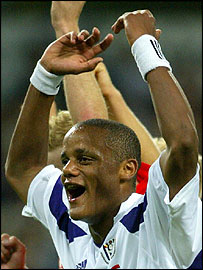 The 19-year-old was on Chelsea's wanted list in the summer but they ended up bolstering their left-back position by signing Asier del Horno instead.

"I've advised Roman Abramovich to keep a special eye on him."

The Belgian international was not in Anderlecht's squad for Tuesday's opening Champions League clash at Stamford Bridge, which Chelsea won 1-0.

Ive never seen Kompany play before so i cant say if he is good or not im going by his fm stats just now. Would he fit in there team?
J

Hmm I havent seen him play before either, but if Mourinho wants him he must see something in him.

I really doubt that we will sign another CB already having Terry Gallas Carvalho and Huth as our main four.
G

Carvalho will be on his way soon I think if he doesnt start licking Jose's ****.

Real Madrid goalkeeper Iker Casillas could be in his last season at the club with a move to England in the pipeline.

The 24-year-old Spain international is still waiting on a new contract offer and the News of the World report that Arsenal are potential suitors.

"I've not sat down with anyone from Madrid to discuss a new deal for Iker," said his agent Gines Garvajal.

"We are waiting for the call but if not, from 1 January we can talk with other clubs."

Manchester United showed interest in Casillas earlier in the year, but at the time any move from his hometown club looked unlikely and Sir Alex Ferguson has since signed Edwin van der Sar.

That leaves the way clear for Highbury boss Arsene Wenger to finally secure the services of a long-term successor to former England goalkeeper David Seaman.

Casillas fits the bill and it is thought the player would be willing to listen to offers.

He is said to be growing disillusioned by Real's failure to discuss new terms and improve his basic salary of £7,000 a week, a figure that is dwarfed by his fellow galacticos at the Santiago Bernabeu.

That is appaling, in footballs modern wages. There on of the biggest and richest clubs and they cant afford to offer one of their long term and possibly best players an improved contract. If I were him, i'd get outta there but not go to Arsenal.
K

I cant see him leaving Madrid. Why would you want to go to Arsenal from Real anyway? and i dont think Arsenal have much money the now with the Stadium being built.
L

I reckon he will end up leaving and Arsenal and Man Utd could go in for him, if we got him he would be backup for van der sar till he starts making a few mistakes and he wouldn't get back in the team.
G

He would leave for the money!

& im sure Arsenal could afford him on a free
S

Thread closed. I would rather have seperate threads for transfers etc.. as these big threads get very confusing after a while.