Tonight Middlesbrough Played Skoda Xanthi. Everton were away to Bucharest and Bolton had Lokomotiv Polodiv (sp) at the Reebok. 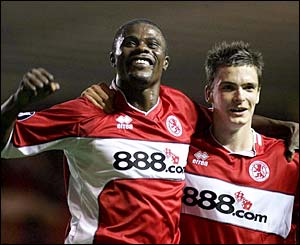 I went to Boro match, awful turn out, didn't hear the exact attendance but it must have been about 15k. This was mainly due to the lack of 'entertaining' football (which i don't think matters if there is goals) and the high ticket price (£20). They could have let us in adults £10 and kids £5 they would have probably made up the loss selling Coca Cola to chavs.

Anyway, we won. No one imparticular stood out for me, Pogatetz was going in hard, wasn't afraid to get stuck in which i like in a player. Ugo and Bates at the back were slightly dissapointing, can't wait to get Riggott back see what McClaren does then. (Southgate and Chris hopefully).

Maccarone is looking good, not scared of other players anymore and got in some good positions. Viduka didn't do great, but made some half decent passes and held the ball up a bit.

What was he doing. He had one good attempt at goal, a few good runs, but every time he got touched he was sprawling to the floor, and screaming at the ref.

A player on his side was injured but walked within 5metres of the touch line and sat on his ***, boro played on with Pogatetz, there player just grabbed Pog and pushed him to the floor. Emerson came charging in and had a right go.

I tell thee, if it was on TV i would of stayed at home.

To the other matches 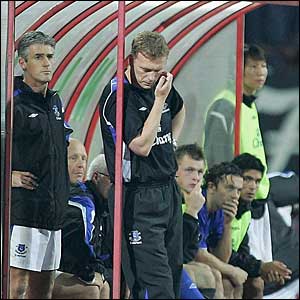 I know it's a hard place to go, but still that is awful. 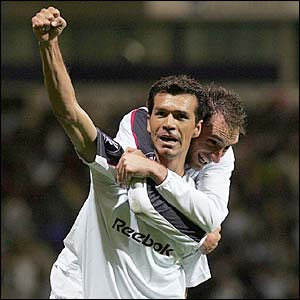 Don't know anything about this as of yet. Though i think they came from behind.

Well I was watching the Bolton match but everytime I flicked over to ITV2 Everton seemed to conceed a goal, almost like it was me making Everton lose! *evil laugh*

The Bolton match wasn't anything special, far better than their game against Blackburn at the weekend. Bolton went 1-0 down in the first half and during the second half Lokomotiv kept timewasting so when one of the Lokomotiv players went down on the edge of the Bolton box for nothing at all to be honest Nolan stopped Gardener kicking the ball out of play and passed the ball to Hunt who played in a supoib ball for Diouf to head into the far corner. The second goal was good aswell, Borgetti hadn't done anything since he came on and Nakata, who was having a really good game, cleverly flciked the ball between the defenders with his head to find Borgetti who calmly slotted the ball into the far corner.
G

I saw the last 30 mins of the Hibs game. Some of their play was Jizzadelic
L

I was watching the Bolton game, Plovdiv just scored against the run of play it was Bolton all game really, the goal was coming and Diouf scored (hes doin well gd for bolton) and borgetti scored getting the win, good result to go over there with.

Boro was a formality really couldnt see them conceding or losing.

Everton were shocking, i couldn't believe they lost 5-1 there going to have to do a Celtic now.
J

Erm, well not really Lloyd, you see Celtic never actually came back and won so although their in the same situation as them, they are going to have to win

I really dont see Boro Everton or Bolton getting very far, even if Boro and Bolton had some good wins.
L

Well I can't see them scoring 4 goals. Probably get 2 goals at the most as Bucharest will probably sit right back all game and stop Evertons 'successful' long ball tactic.
J

i was impressed with diouf, he showed his class at times

i wish we had him back at liverpool, he would be the attitude we need in the midfield,

every team needs a few players with attitude
G

The groups have been drawn :

I wouldn't say hard. Bolton's group does look a bit more difficult than Boro's though.
R

Yeh, Bolton's group does look harder. Alkmaar will be a difficult game and it is away aswell.

I will be going to the home games, i think they are dinipro (sp) and litex.

Should get through.
A

Im chaging the name of this thread to 'Uefa Cup' sweet n simple.

So keep all youre UEFA cup posts in here.
J

I think Boro will loose all of the away games and struggle to draw the home games as these teams are slighty better than Boro. Espesh Alkmaar as they recently won the Dutch League.
L

Bolton will find there games very tough with the players they have got, Sevilla will probably beat them at Reebok Stadium.

Boro have got it easier probably lose just to Alkmaar and win the others.
M

Jamie said:
I think Boro will loose all of the away games and struggle to draw the home games as these teams are slighty better than Boro. Espesh Alkmaar as they recently won the Dutch League.
Click to expand...

well at least we proved J wrong , but I cant wait for the Alkmaar game, its gonna bean absolute ripsnorter of a match. But after winning against grashoppers we only need a win to practically guarentee ourselves of a place in the next round.

how fat is ailton :lol:
L

ailton is very fat he did good for werder breman the season they came top was it?