We Love the Silkmen. We Do. Well, at least you will after reading this. I'm a Silkmen fan and I've updated our permanent transfers in the Editor. I've downloaded magicmastermind's (he's over at SI) database for extra layers to the database and am using the excellent media pack that comes with it. It'll also stop the press calling me a saddo in the first press conference.

Anyway, you'll probably know us best as the team that beat Cardiff. But we have a decent academy having produced Shaun Brisley and Elliot Hewitt and our most famous ever player but didn't come out of the academy is Rickie Lambert.

Unfortunately, I'll be playing with a rather different squad to the one in real life, mainly due to Mackreth and Barnes-Homer being horribly underrated (curse you researchers)!

Well, I hope I bring some success that the Silkmen army deserves and I hope you'll be there with me.

I've also got a parent club in Middlesbrough:
View attachment 309654

Thanks. What do you think of my signings?

gogogo golem said:
Thanks. What do you think of my signings?
Click to expand...

Not sure if you remember my Aberdeen story from FM12 but Joe McKee was my very own supersub. If I was struggling I would send him on and he regularly set-up or scored a goal from a set piece!
G

KLIPPYBO said:
Not sure if you remember my Aberdeen story from FM12 but Joe McKee was my very own supersub. If I was struggling I would send him on and he regularly set-up or scored a goal from a set piece!
Click to expand...

I remembered that when I signed him. He's a starter for me and in the first game he scored an outrageous free-kick, a penalty and almost scored a long range free-kick as well. Early days but looks like some inspired business. His contract is coming up at the end of the season so I'll try and sign him if possible.
G

August 2013​
A decent month but we need to make less silly errors to get promotion.

4-1 Hereford
McKee 2(1pen), Audel 1, Winn
Tense game at the start but after McKee fired home a couple of setpieces we dominated it.

0-3 Wrexham
Embarrassing. Audel played well but everyone else was average at best.

Poor performance. Addo played well no one else did
2-1 Barrow
McNamee 1, Holroyd 1

Dominant performance, should have been more. A few defensive errors though that weren't punished.

League:
View attachment 310186
We are still in close touch with the leaders.

Player of the month:​

Mathieu Welmant. Consistent performances from the left back help us salvage points.
G

September 2012
​
1-0 Luton
McKee (pen 20)
A tense nervy affair where we were slightly better. Settled by a McKee penalty.

2-1 Stockport
Winn (51) Holroyd (66)
It was tense with us giving away too many chances, especially since I was exploiting a tactical flaw of Stockport's.
However, when their player was sent off in the fiftieth minute, we were all over them. Should have been more.

1-1 Braintree
Brown (45+1)
We dominated but defensive errors led to an early goal conceded. We created lots of chances but failed to put them away. Brown scored from a McKee free-kick.

2-1 Nuneaton
Welmant (19, 25)
A good performance but defensively we weren't up to par again. It may be to do with the fact we have seven new arrivals in defence and nine defenders overall.

1-1 Forest Green
Holroyd (10)
We were slightly better but poor defending (and acceleration) from Diagne meant we conceded a goal we shouldn't, marred a strong defensive performance.

3-2 Mansfield
Holroyd (24, 80), Jackson (60)
A good display but poor defending from Nat Brown, as well as substitutes Diagne and Carl Martin made it a lot more difficult than it should have been.

3-1 Kidderminster
Holroyd (19), Kissock (53), Jackson (62)
More like it. Complete domination. The opposition goal wasn't even an error for a change. Should have been more but I'm completely satisfied, apart from McKee being out for two months as he's won us several points on his own.

League:
View attachment 310563
A solid performance this month puts us second in the league, just should be one better.

Player of the Month:
Chris Holroyd and John-Paul Kissock 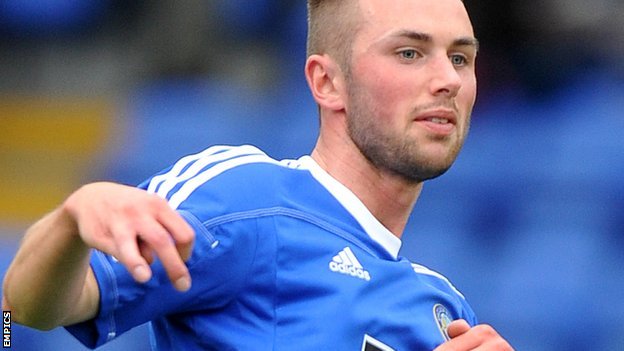 ​
Loanee Chris Holroyd has scored many key goals and deserves a mention. Meanwhile John-Paul Kissock (the non-league Messi) has been the creative force behind our great form and eight game unbeaten run alongside McKee but it has really been Kissock behind it all.
G

Just as one of my right wingers was finding form:
View attachment 310566
I also forgot to mention that the reserves drew Congleton Town in the Cheshire Senior Cup:
View attachment 310567
Since I don't have a reserve manager I might take charge for that game and include it in the update. If anyone want me to I'll try and remember.
Last edited: Feb 12, 2013
G

I've just read that the database I'm using may cause the premier league not to run, so I'm conducting a holiday test and if the prem doesn't run, I won't continue with this save.
G