What did I get myself into?!? The Titani Challenge

Long time lurker, First time poster. Getting bored with the save I had, I decided to try a challenge. I've done a couple in the past and have had fun with them but this time I really wanted a challenge; something that I would really struggle with. After talking to some friends who are really into challenges, I decided on attempting The Great San Marino Challenge!

Basics of the Challenge:

Take control of the club San Marino in the Italian C1 and progress the club all the way to being Champions League Champions.

Become the National Team manager of San Marino(country) and win the world cup.

Obviously this is a long term challenge and I'd be shocked if its less than a 20 season save. Its a real challenge that will strain my tactical knowledge and patience as I struggle to get the clubs standard higher while also looking to grow football in the micro-state of San Marino.


I'll try to update at the beginning, middle and end of each season and keep a running tab here in the OP. Well, here goes nothing. Forza Titani!

Squad
Squad has some decent players, but not much depth. Stefanelli interests me because he is Sammarinese which will be important for national development. Calvano on loan from Milan is a real solid player as is Lunardini who projects to be a solid CM for me.

National Team
Ranking - 207
Notes - Didnt decide to start as NT coach. Still looking at every report I can and making sure the youth teams players are on my squad so they can get proper training
Last edited: Mar 22, 2013
E

I decided to make this thread a bit late so I dont have the screens from when I bought them but they are actually from November. Brought in some youth on free transfer as well as added to the squad depth. The whole goal of these first couple seasons is try to move up while spending as little as possible so that money can go into the teams infrastructure.

Young Italian Winger. Brought him into the youth set up to get some training. Only $210/week. Will probably send on loan to a Serie D side in the January window for some first team action.

Originally was going to stay at the club at the u20 level and be tutored by a first team member but some great play in the Italian C cup has seen him break into the first team already at 19. Has off games as you expect any young player to have, but is composed on the ball and is probably my most clinical player at this stage

Not much for ball skills but a rock in the back. Is rarely caught out and makes all the plays asked of him. One of the first names on the team sheet each week.

Basic Cover for the first team. Features mostly in the cup games but has seen substitute appearances in league. Comes in when the game is in hand and gets stuck in. Combative.

Marauding LB. Given free reign of the left side and has been an outstanding signing.

Signed for his technique and tutoring ability. Allowed me to cancel Doumbia's loan which ended up saving me close to 3k a week in wages.

High Potential ST. Deep there at the moment with players loaned in so he is out on loan getting first team action.

Brought him in to get reps at the lower level but in the pre-season won the number 1 shirt and hasnt looked back. Will probably feature for San Marino until Serie A

EDIT: Can someone help me with the pictures lol. They are on imageshack but I must have linked them wrong. lol
Last edited: Mar 22, 2013
D

good luck pal i shall keep an eye out
D

use the image insert icon on here, always works for me.

you only need imageshack for sites and forums that don't have their own way of inserting images.
M

put the link between this code
no spaces obviously.
E

Just ended my first season in charge of San Marino. I was shocked about how my team performed. My best XI was about average for this level but injuries ravaged my team in January and February. Squad depth was a real issue and with no reserve league their match fitness was poor all season. But with no further ado, the end of season table: 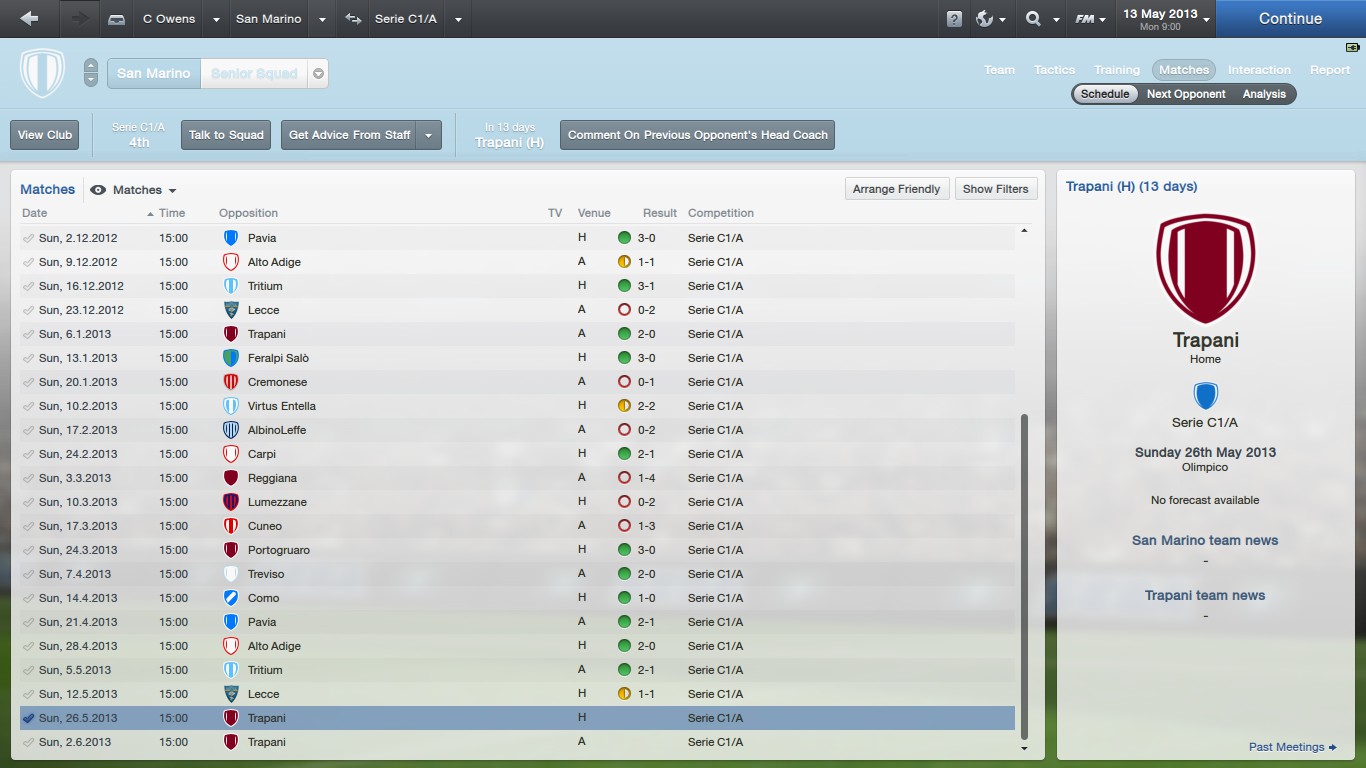 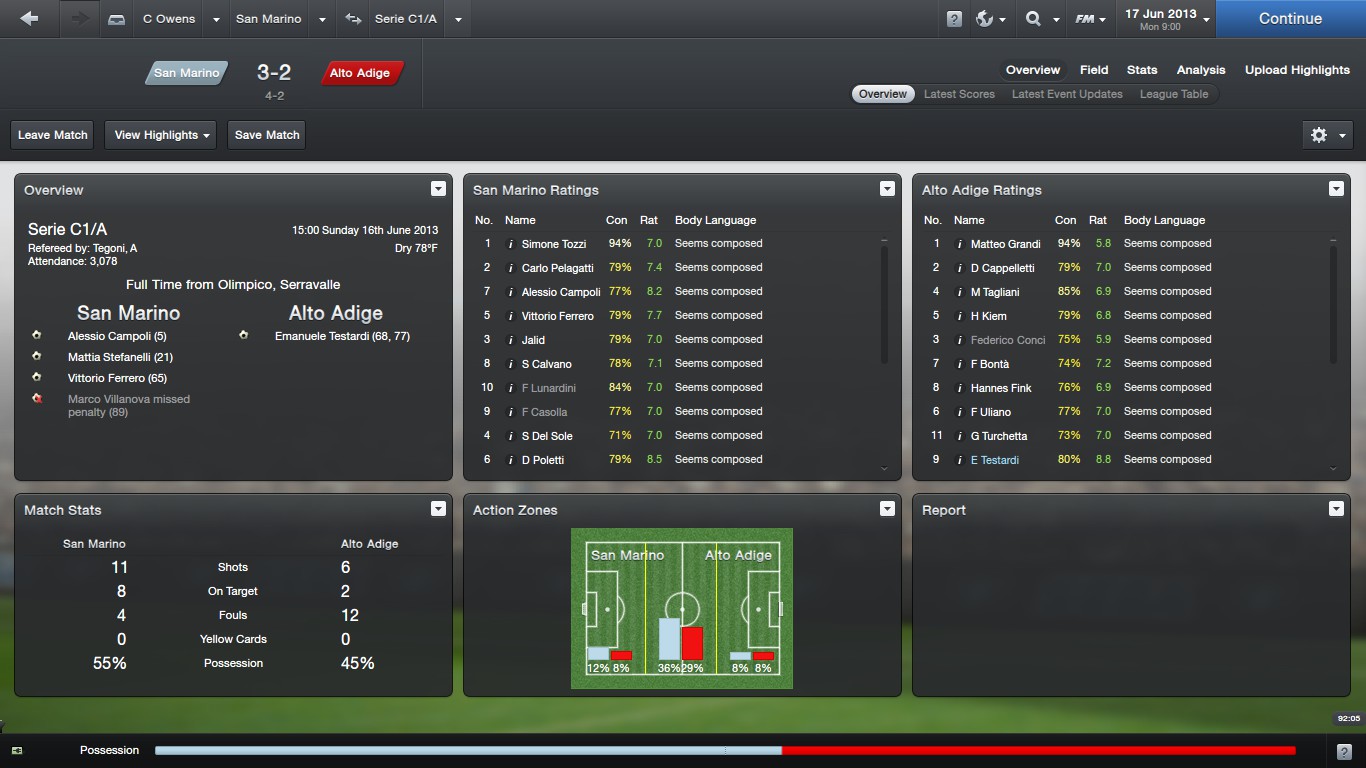 Shocked. Honestly don't know how it happened. Kinda scared about this squad going up into Serie B, probably going to have to play some anti-football to just stay alive. Anyways. Onto the youth intake.

Not great youth intake, but that was to be expected. Here are the guys I ended up keeping.

Signed Capellini on a Bosman so he will stay at San Marino instead of going back to Cessena. Also poached a French ST on a amateur contract who I am real excited about:

Also brought in these two players: 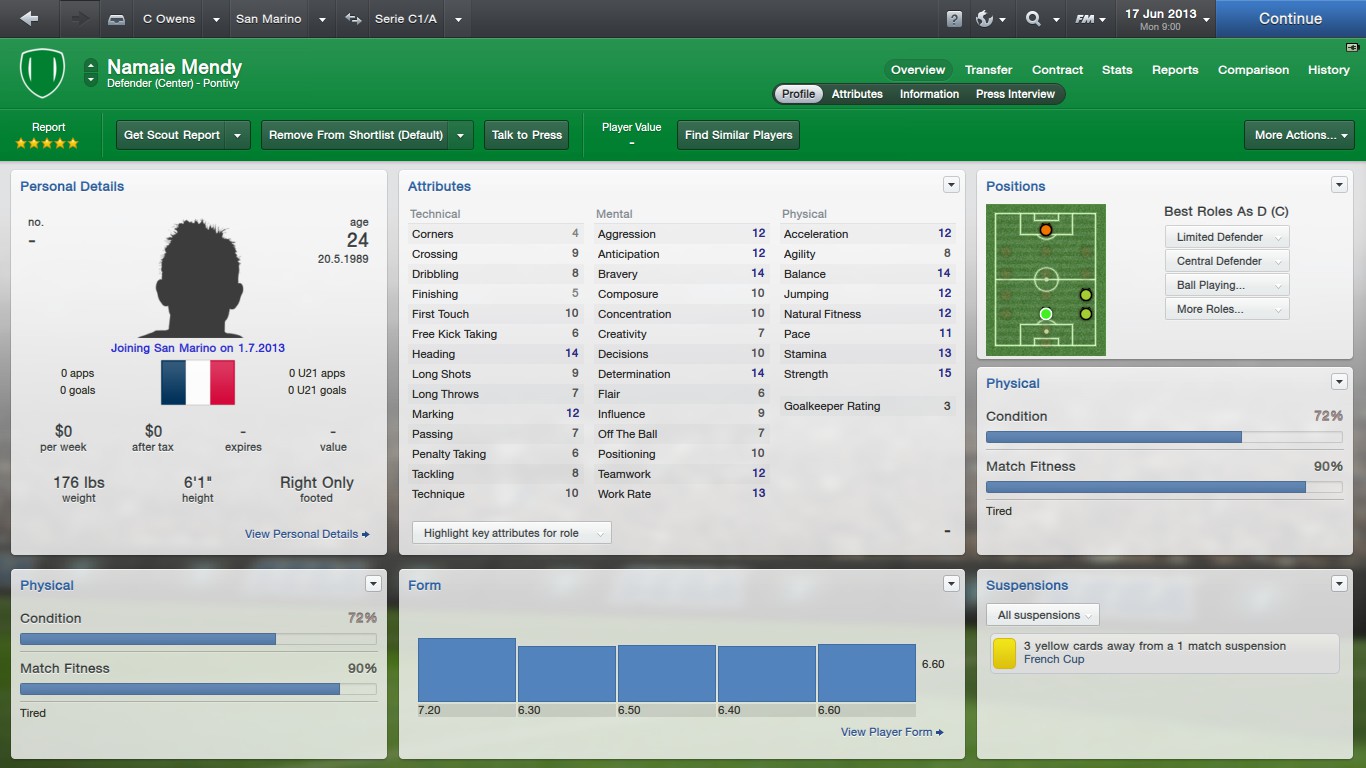