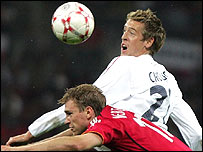 Crouch, 26, is banned for the Euro 2008 qualifier against Israel on Saturday and Poll says that is no surprise.

He told BBC 5live: "Fifa's head of refereeing said, 'look at Crouch, he's a pain and he gets away with a lot. We need to mark him out and look for him'.

"We were shown videos of him. I tried to defend him, being English."

"We had been out there for two or three weeks before, and it was pointed out the way he used his arms.

"Now, Crouch has been picking up cautions in qualifying and is out of Saturday's match."

Crouch will be available when England take on Russia in another crucial Euro 2008 qualifier next Wednesday.

Ok so this was already pretty obvious but it's still pretty shocking. I think the only player who is less likely to foul someone when going up for the ball is Heskey but whenever Crouch goes up for the ball for England or for Liverpool (in the CL) 50% of the time it will just be given as a freekick to the opposition.
K

thats a disgrace just because of his height.
G

Ye he never got away with anything at the world cup right enough? >_>
K

lmao thats very true i forgot all about that
L

Kris said:
lmao thats very true i forgot all about that
Click to expand...

yeah its bs, first thing i thought bout was when he nearly ripped Sancho's hair out