Download
Overview History Discussion
The aim of this system is to play quick tempo football moving from back to front, creating goalscoring chances in the fastest way possible whilst encouraging short passes. Possession is not the focus for this style of play and average possession will often be between 45 and 50%. The team will look to make quick and incisive passes, using an energetic and athletic midfield 3 to break forward and overload the opponent's defence, allowing the front 3 to exploit the space to create and score the goals.

Without the ball, the team will be aggressive pressing the opponent into submission, deploying the highest lines of engagement defensive line, to make the pitch smaller ensuring we can win the ball as quick as possible. The two Segundo Volante's make it even more difficult for the opposition to play through the middle as they will stop the opponents forwards getting one on one with our centre backs.

Once the ball is turned over the Segundo Volante's will use their dynamic running ability to get forward, along with the box to box midfielder they will look to break through the lines. This will pull defenders out of position, leaving either our midfield runners the chance to score or pass to an open forward.

Due to the high tempo of this system key attributes to look out for are dribbling, work rate, teamwork, marking, tackling, natural fitness, stamina, pace, acceleration, balance and agility are bonuses.

The basic shape of the team does not change, the only positional change comes from deploying either a pressing forward or a deep-lying forward. For higher ability teams I tended to use a DLP to bring the defenders out allowing more space for the midfield runners and inside forwards. Pressing forwards tended to be used with more athletic and less technical strikers who would struggle to come deeper linking the play. Instead, their role was to simply run in behind and harass defenders at every opportunity.

The other notable change again depended on the quality of the team, if the team was of a lower ability I used pass into space, the reason was as they were generally going to be the underdog teams would attack them more and leave more gaps. 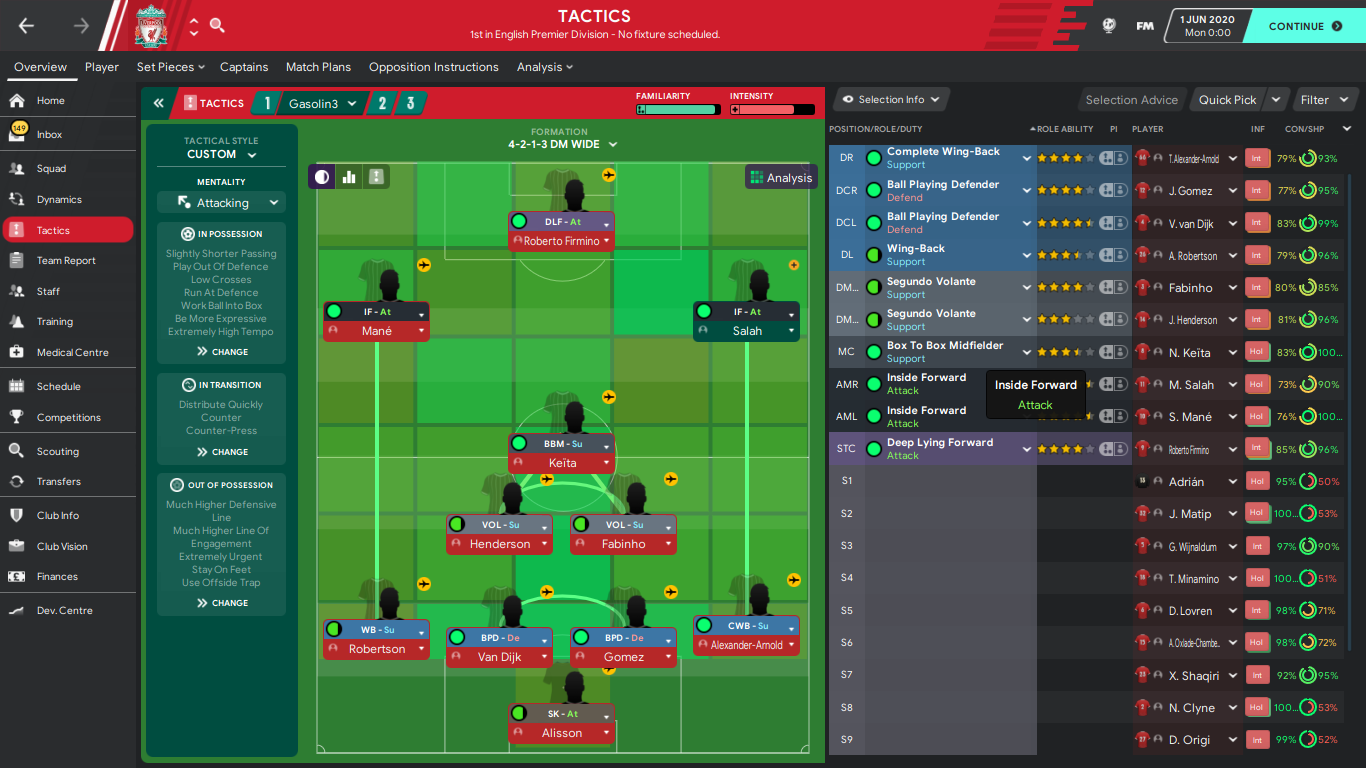 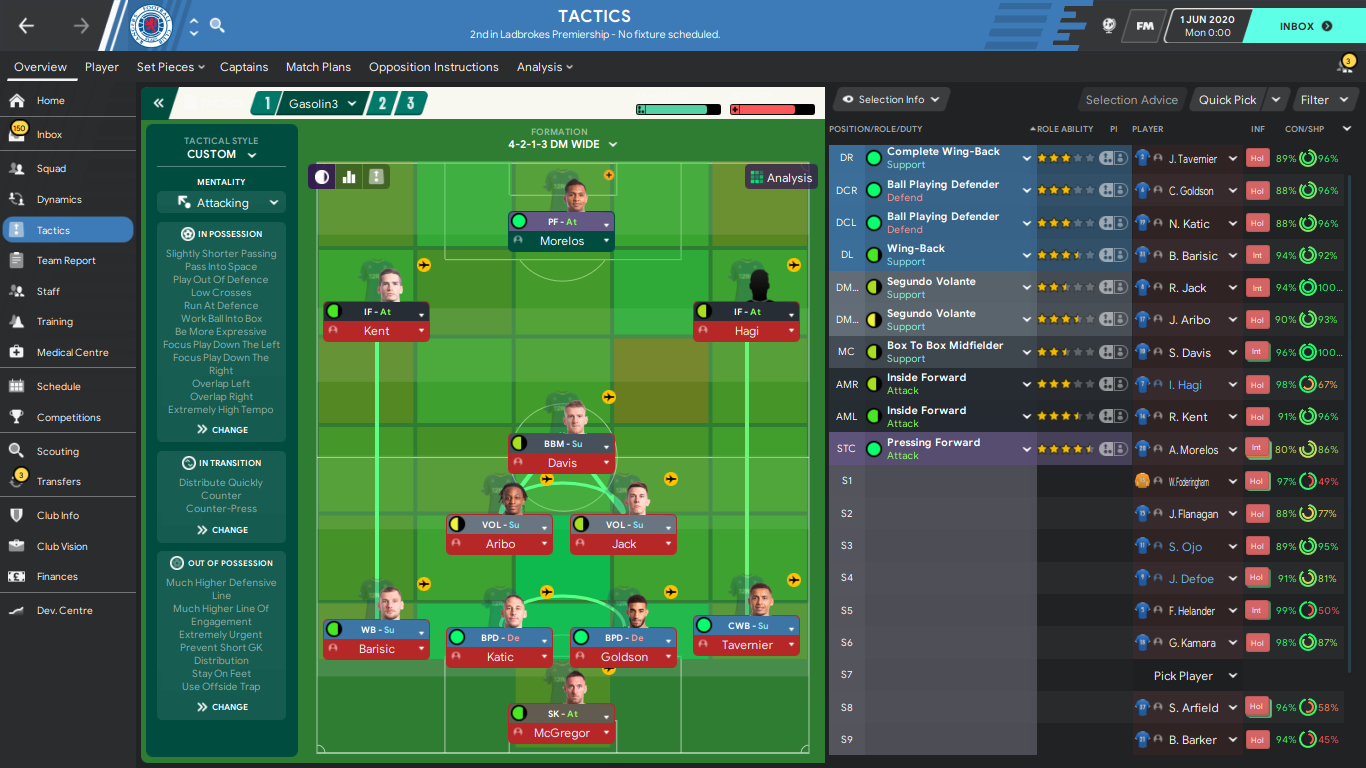 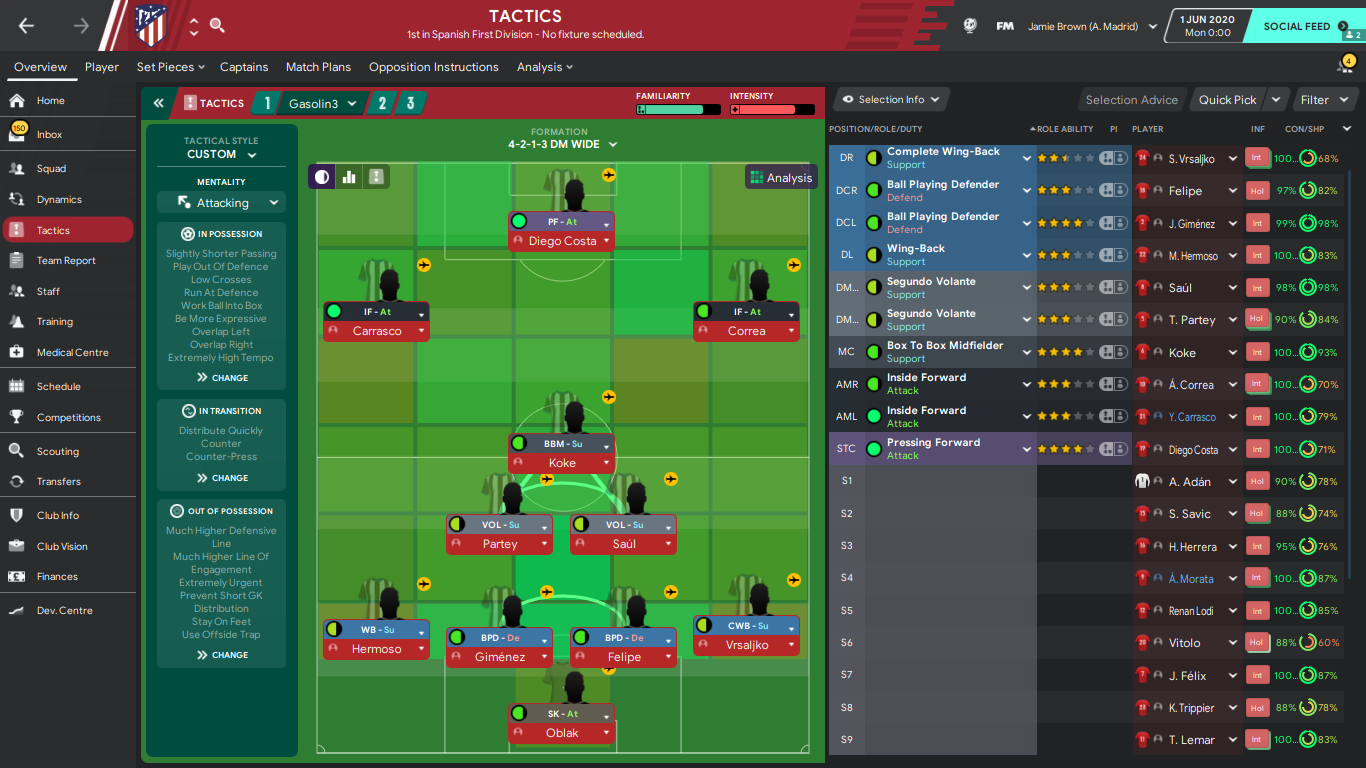 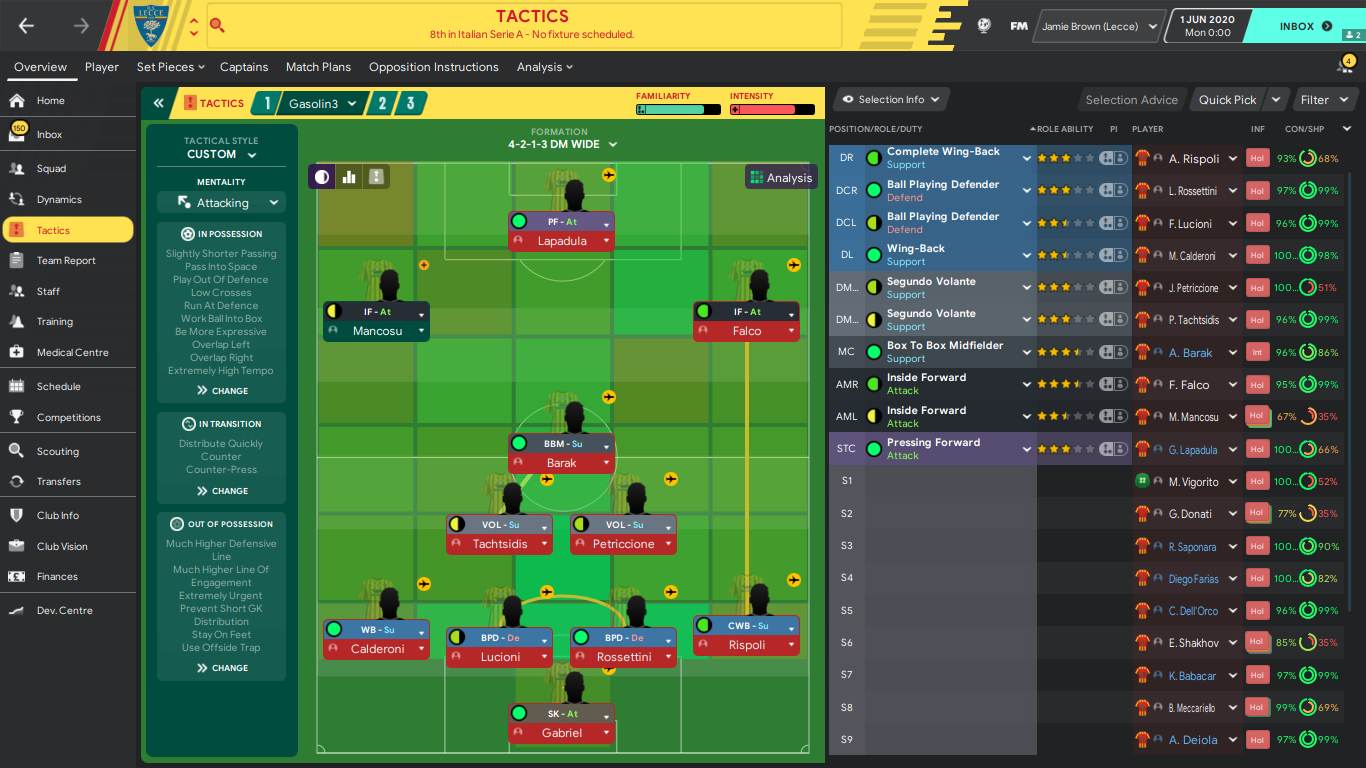 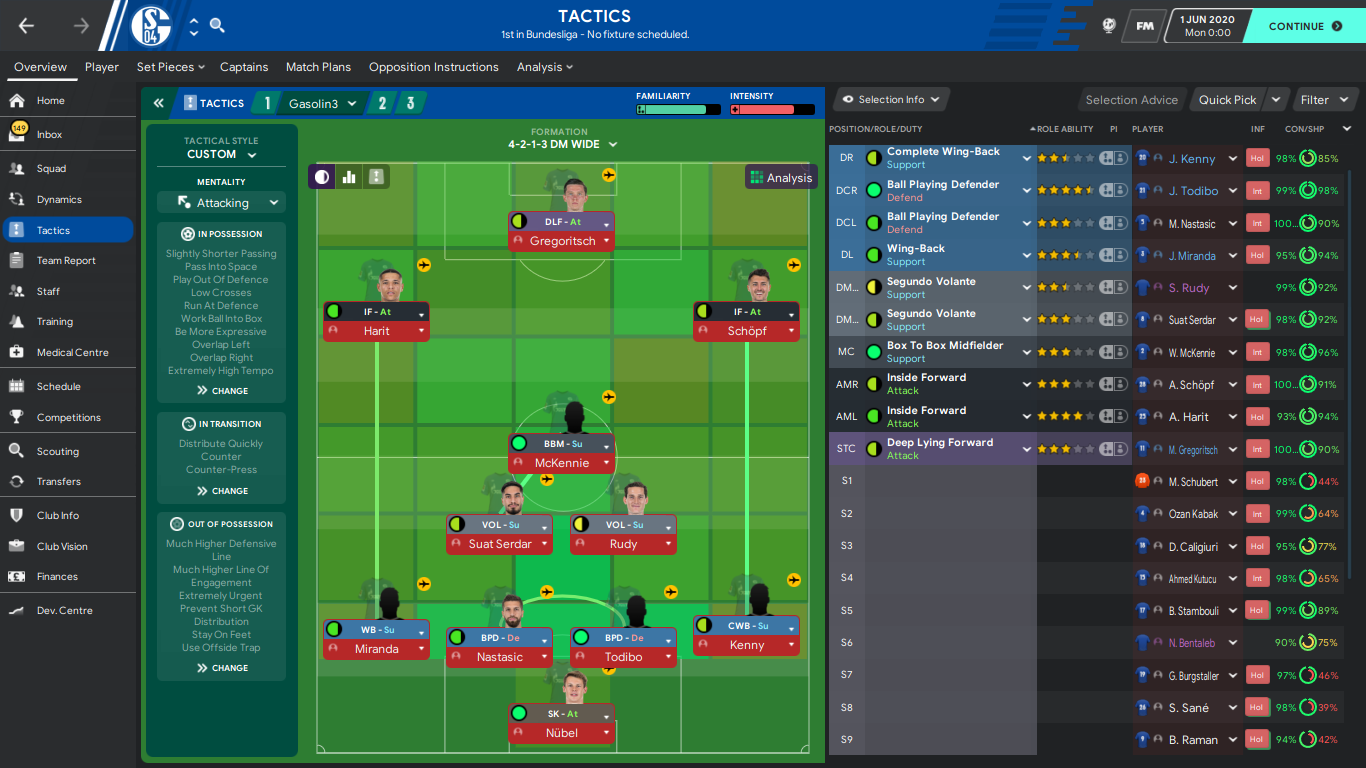 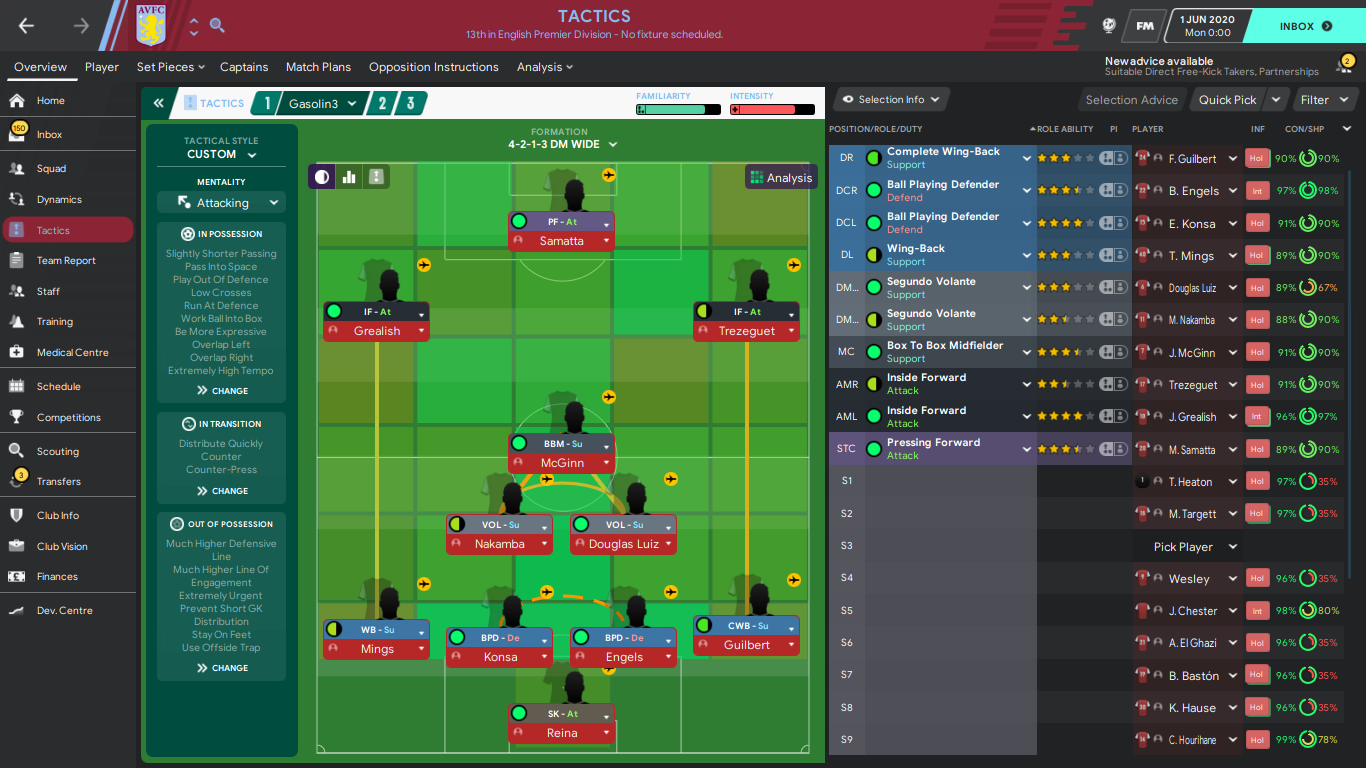 As you can see with the ball the full-backs push up making the formation more akin to a 2-4-1-3, the team spreads out across the pitch creating space for the midfield to run into the half-spaces. Without the ball, you can see how narrow and compact the team becomes in the classic 4-3-3 shape. you can clearly see the 2 DM's create the screen in front of the back four making it difficult and almost impossible for the opposition to play between the lines. 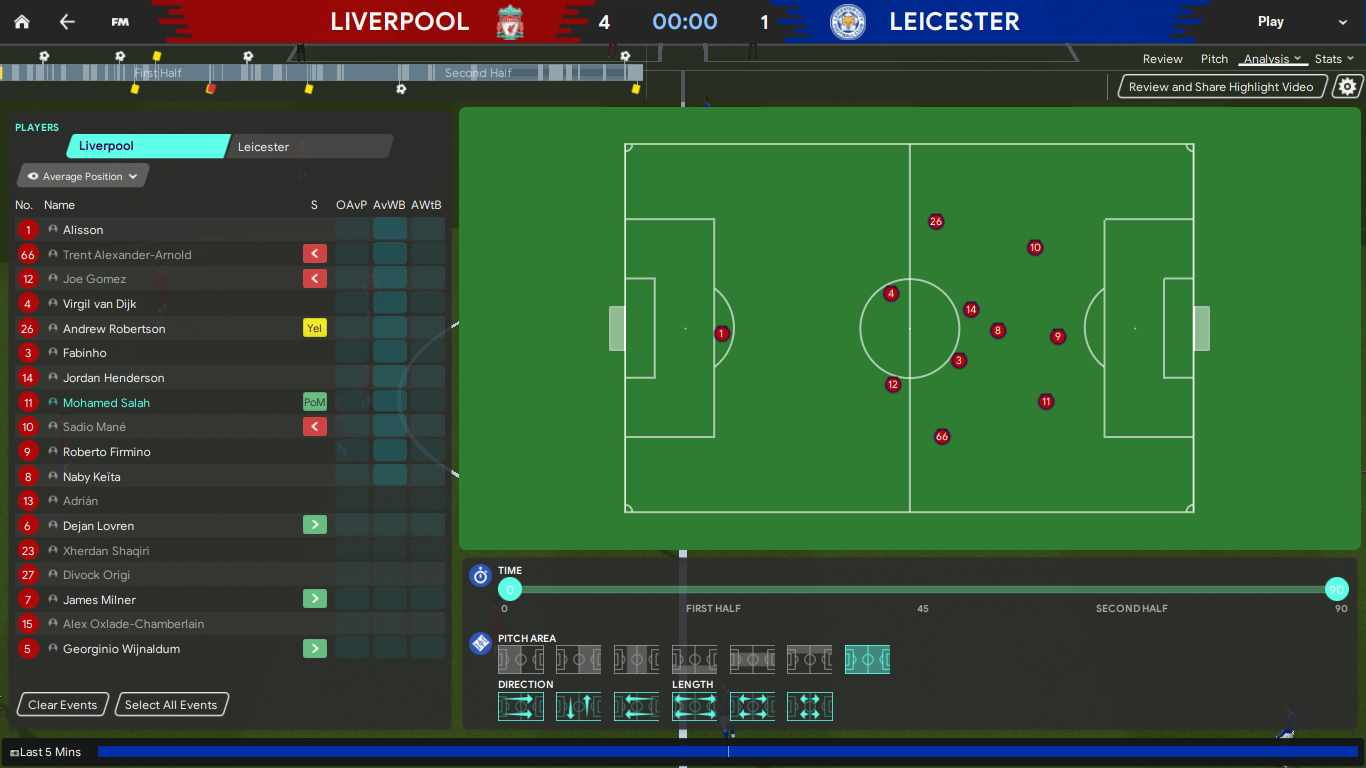 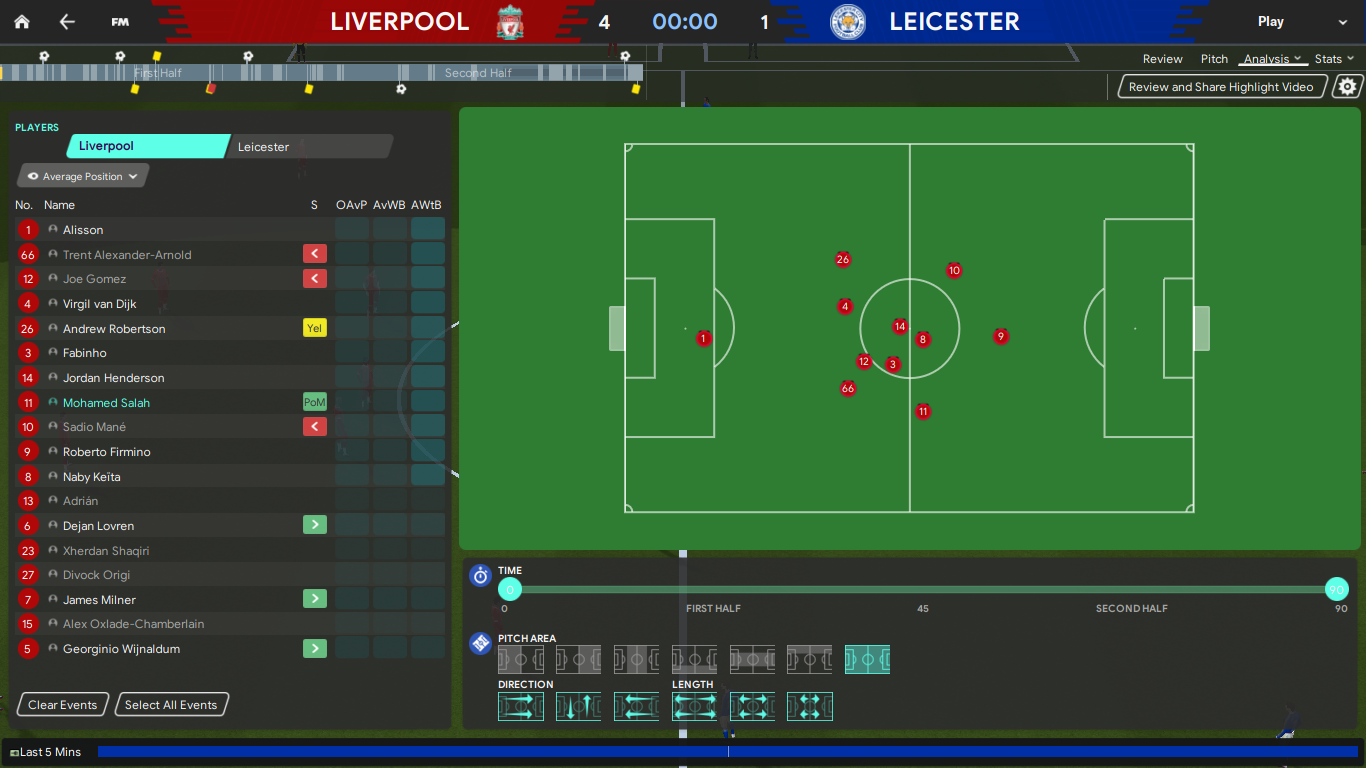 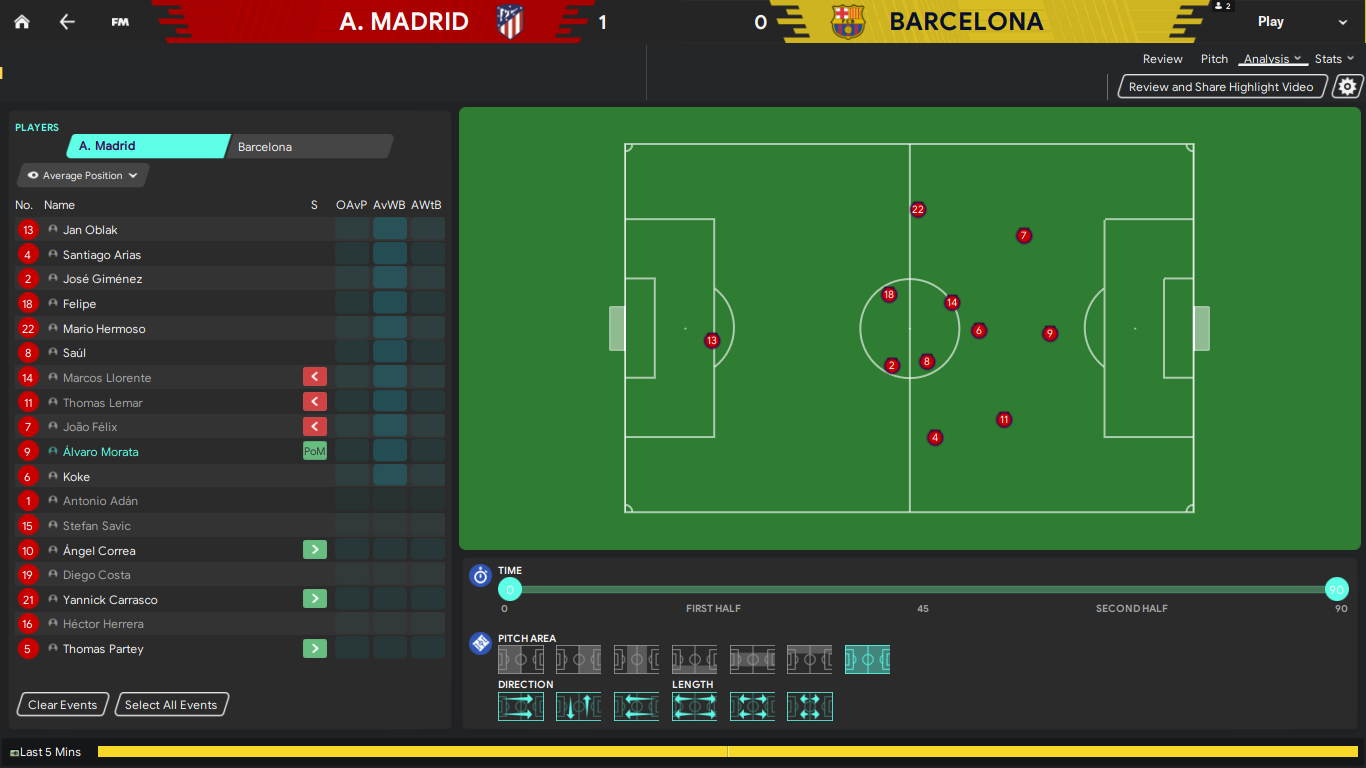 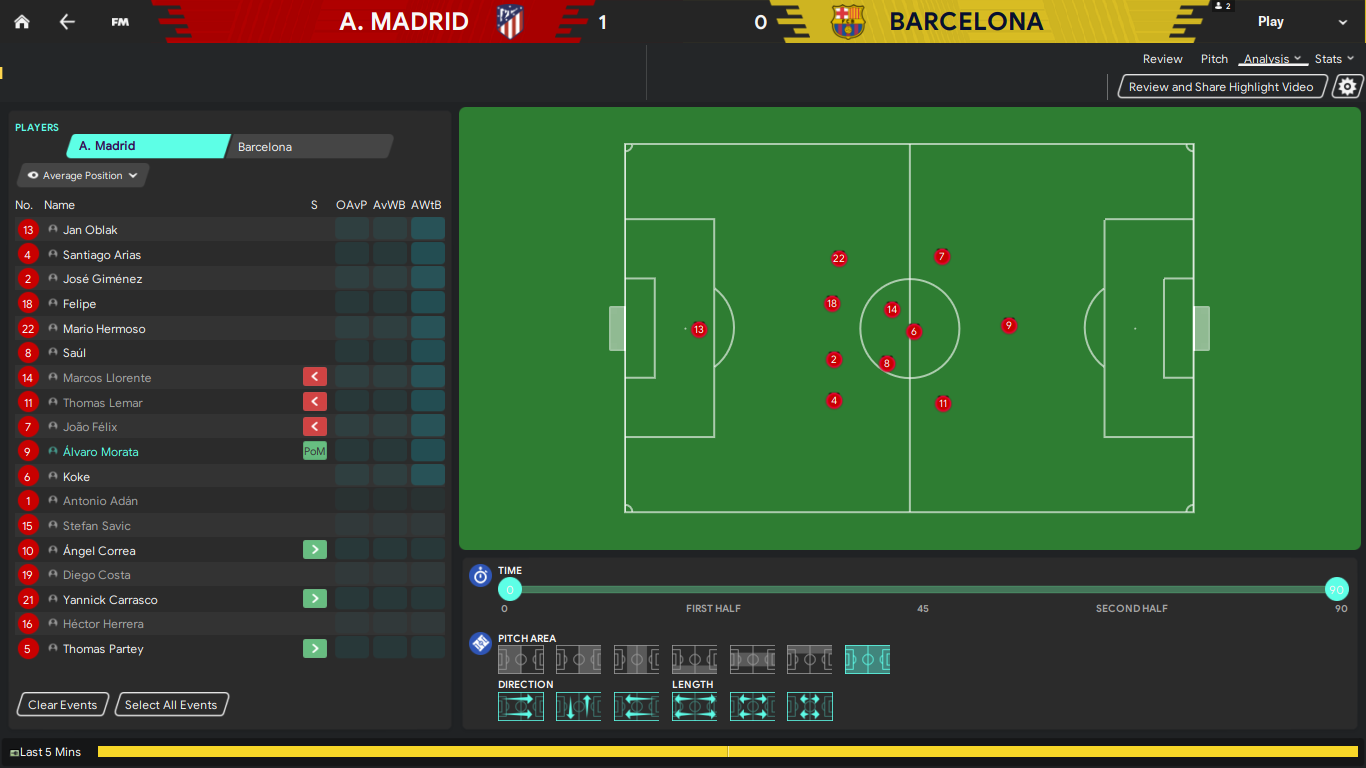 Here are the results of teams of a variety of ability levels across numerous leagues. The tactic produced a high volume of goals for all the teams in relation to their ability and stature, the same goes for their ability to prevent teams from scoring. It was evident that Liverpool and Aston Villa, in particular, seemed to drop off in the second half of the season, this in Liverpool's case was more than likely due to the number of games they had to play. 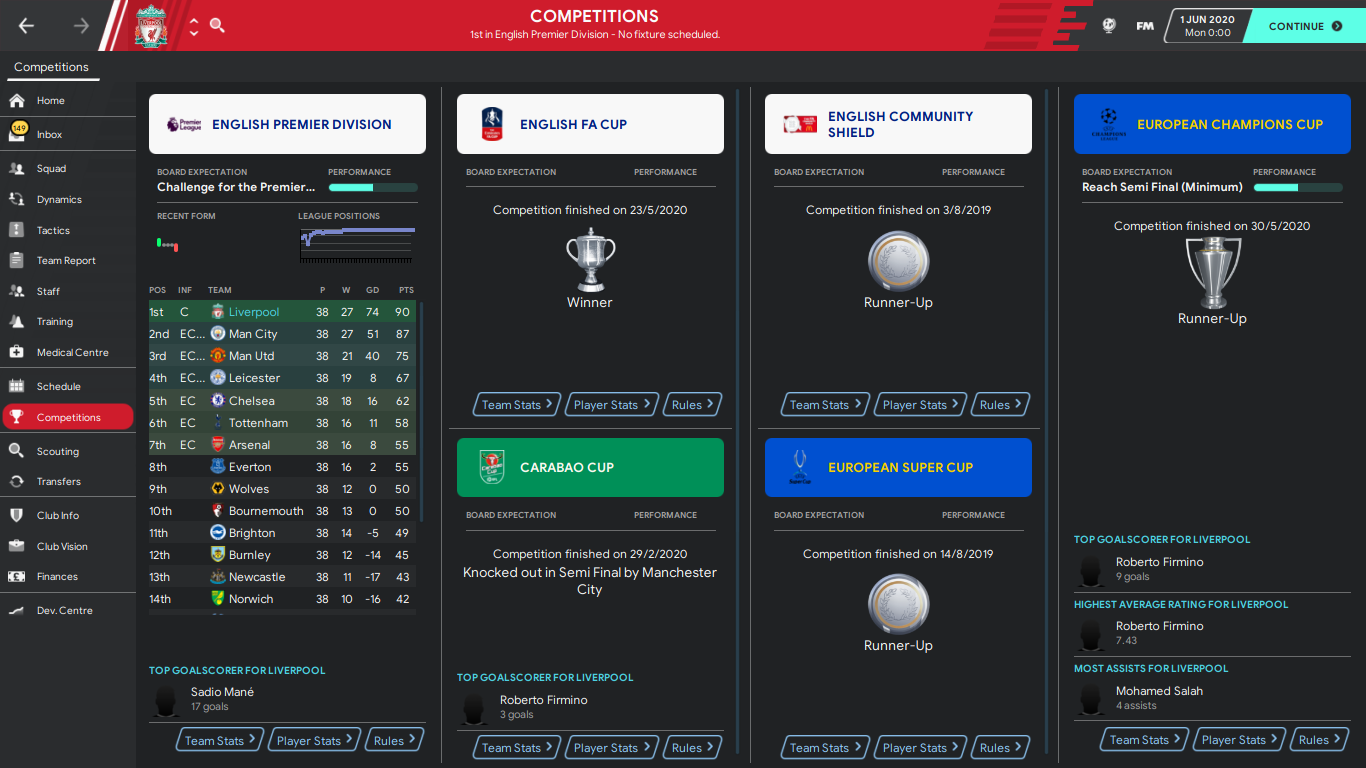 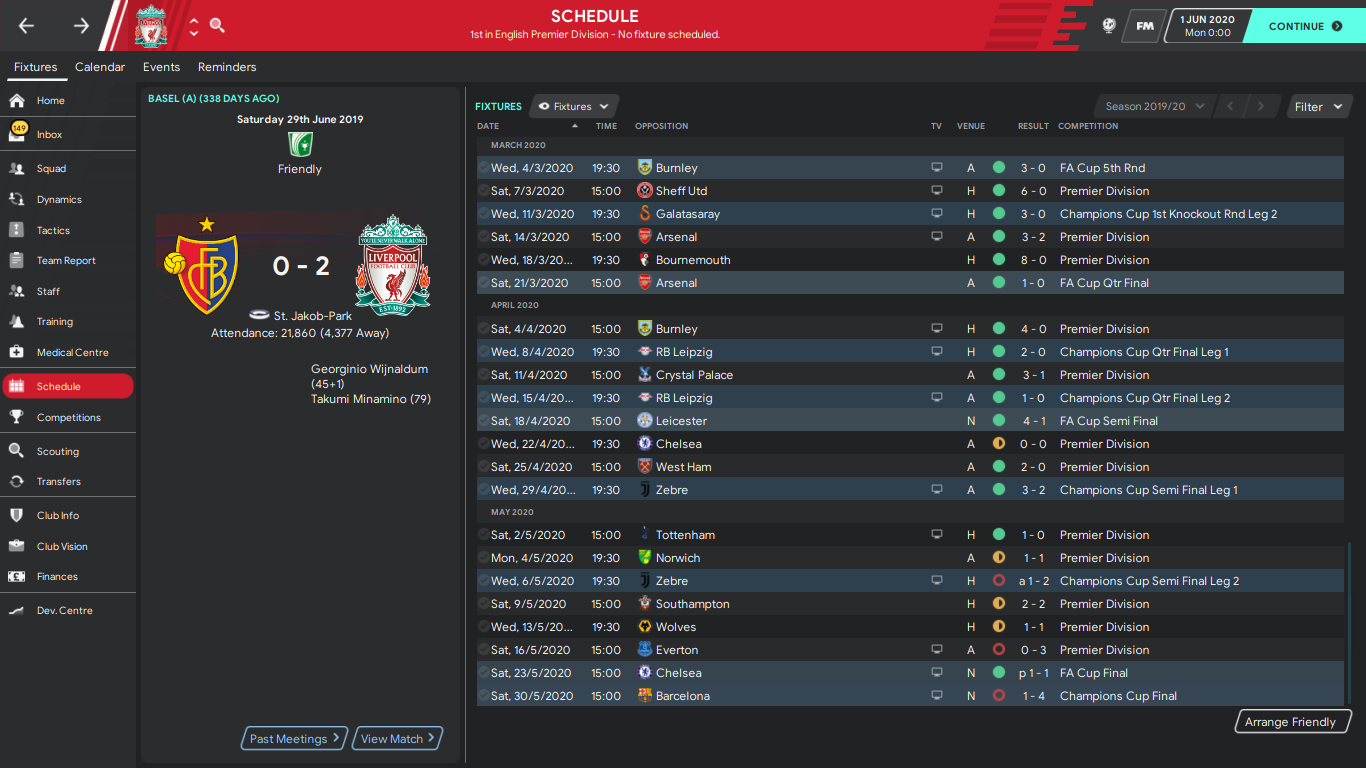 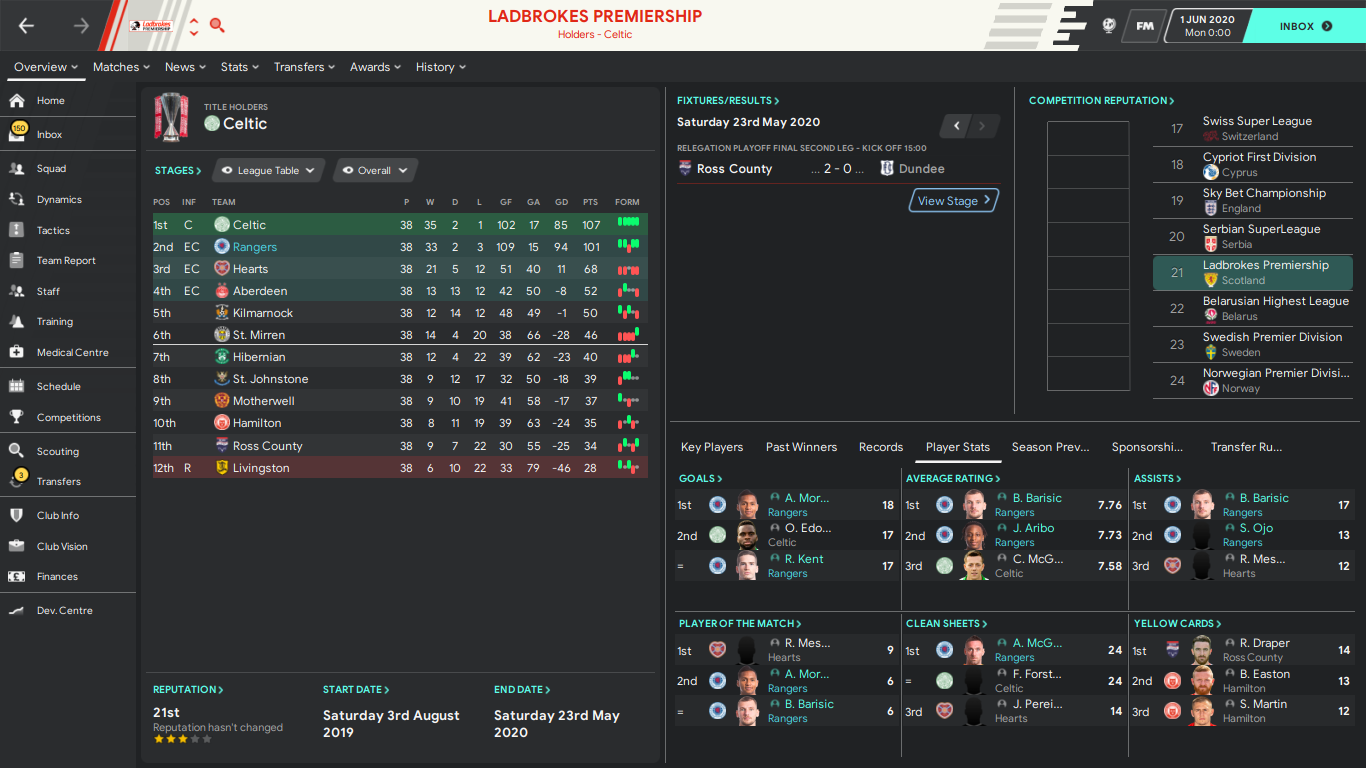 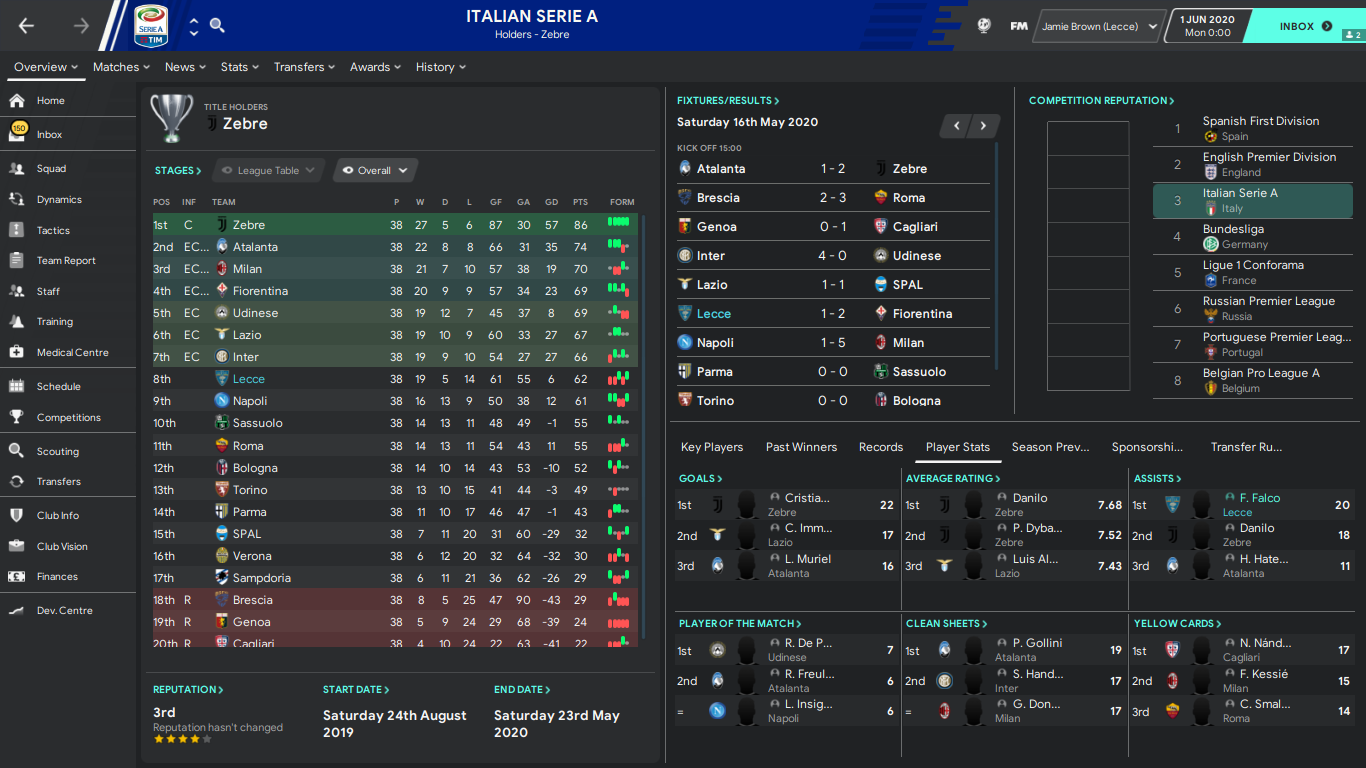 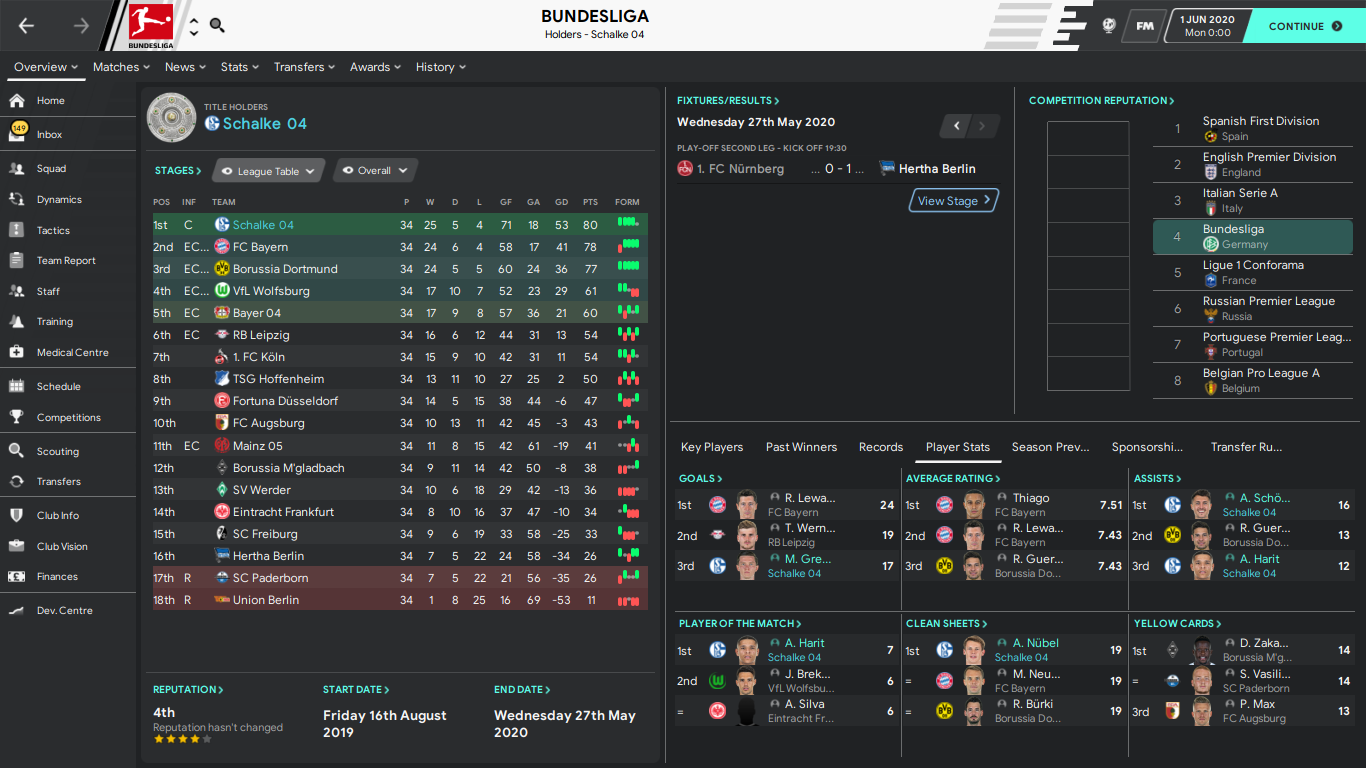