Download
Overview History Discussion
Gegenpress 4-2-3-1 with Inverted Wingers who sit narrow and allow attacking Full Backs to get forward with plenty of space. Playmakers play direct passes and try to find Full Backs open on the wings, who will cross the ball to the opposite winger. I also use a BBM who can carry the ball and shoot from outside the box. I found the role of the Pressing Forward key to recover balls and attack quickly on the break. I used this tactic mainly with an aspiring mid-table team in the Netherlands (ADO Den Haag), and managed to win the Dutch Cup by the second season and I am on track to qualify for Europe via the League in the third one, after final tweaks to the instructions and finding the right players for each position.

Team instructions (only mentioning what differs from the standard):
- In Possession: Fairly narrow attacking width, Pass Into Space and Be More Expressive. 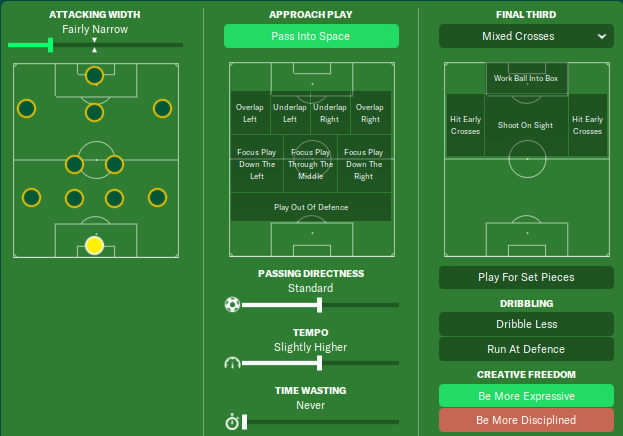 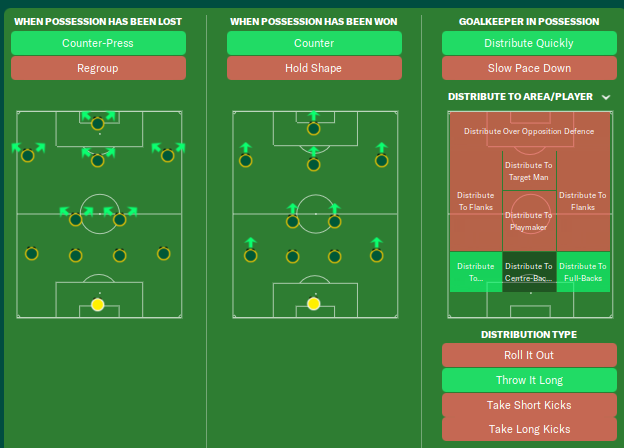 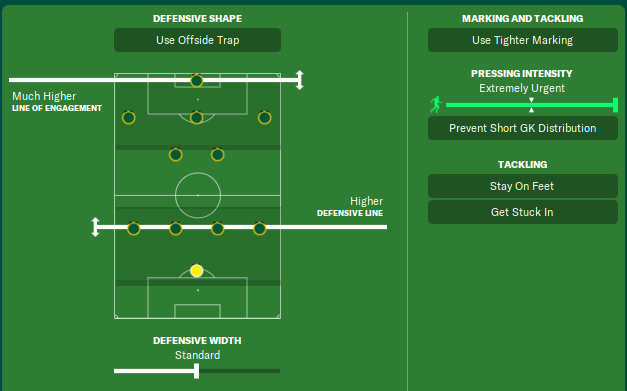 Details about positions and their instructions:
- GK: Sweeper keeper on defense. No extra instructions.
- Full Backs: FB on attack. They start from a deeper position than wing backs, but still get forward. I've instructed them to stay wider, run wide with the ball and cross from by-line, as they will have plenty of space thanks to the wingers cutting in. 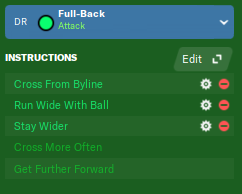 - Centre Backs: Central Defenders on defend who are instructed to take fewer risks, mainly due to being below average at first and having to face opposing teams with good forwards. Still, with the sweeper keeper in place they mostly play out of the back without the specific instruction, before distributing the ball to the full backs. 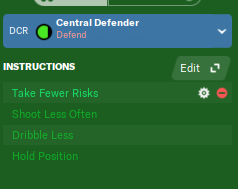 - Central Midfielders: I use a Deep Lying Playmaker, who is instructed to play direct passes, and a Box-to-Box Midfielder, who will dribble more and shoot more often, both on support. The DPL holds his position, but will also get near the box when attacking and will often find the full backs open on the wings. BBM acts as support for the striker, getting in behind and catching rebounds to shoot from the edge of the box, and will also carry the ball forward before passing it to the AMC or the wingers. 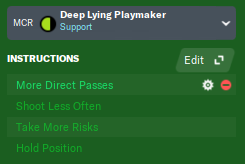 - Attacking Midfielder Centre: Advanced Playmaker on support. He is instructed to roam from his position and play more direct passes, so he will be looking to get balls behind the defense (killer balls trait really helps). He can also switch the ball to the other side of the pitch to find an open full back or winger, and he may drift to the wings to get the ball in the first place. Although the playmaker role includes the instruction to shoot less by default, he will often get in positions to shoot both from inside and outside the box. 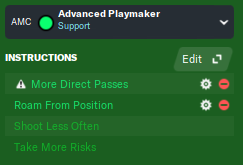 - Wingers: Inverted Wingers on attack. They are key to this tactic. By instructing them to sit narrower they will create space for the full backs to get forward and attack wide. This will also mean that they will get in the box to be on the receiving end of crosses from the opposite side, which will get them plenty of opportunuties to score. They will also cut inside with the ball and try to find either the striker or the opposite winger with a cross, or play it back to the AMC or the BBM so they can shoot from the edge of the box. 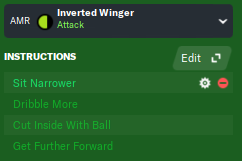 - Striker: Pressing Forward on attack. Since the style is Gegenpress, I wanted to include a PF so the team always defends from the front. Many times my striker has pressed and stolen the ball in midfield, therefore starting dangeorus counters. He is also instructed to shoot more often, as I found that before adding this he was waisting a lot of scoring opportunities by delaying the shot or looking for a pass. Having a good header on this role will help enormously, since with this tactic you will attack heavily on the wings and often end attacks with a cross. 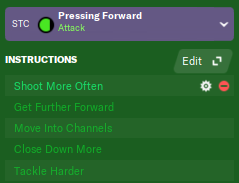 As a whole, this is a really offensive tactic that suits the "play entertaining football" requirement that the board may give you. You may concede a few goals against equal or better teams, but you will almost always create more chances than them. It is a risky approach for a sub-top team, but with the right players for each role (even if they are not the best in the league) you can get great results. You will suffer through some games, but the reward will be so much more gratifying.