Download
Overview History Discussion
Play attacking, entertaining football but still be careful about the opponent's counter attacks and your defense's flaws. With this tactic you will score plenty of goals mainly from your strikers, but other players will also have many opportunities as they will all be in or near the box. 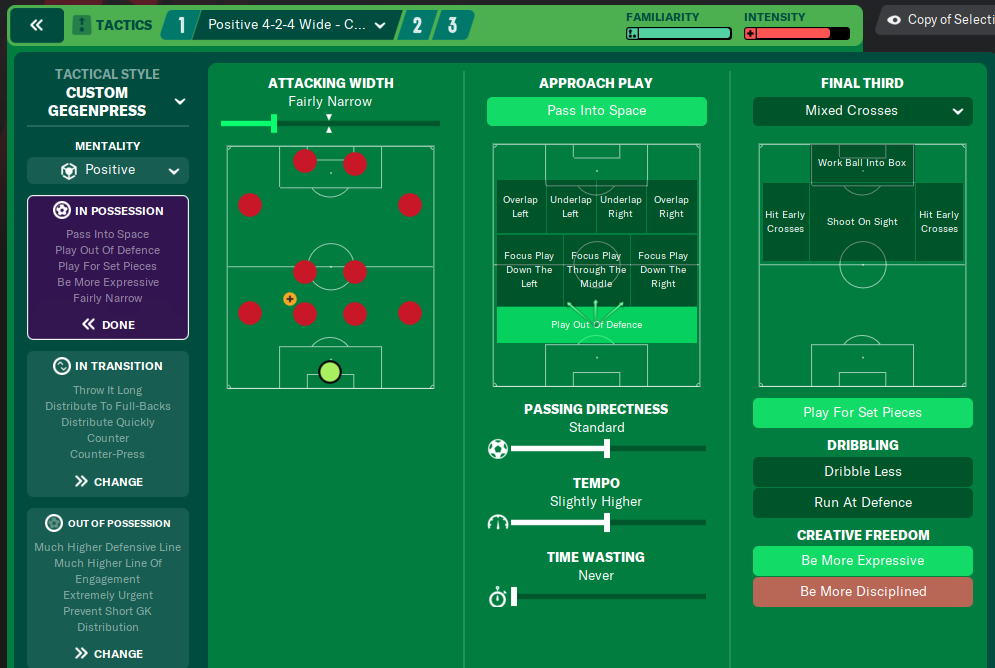 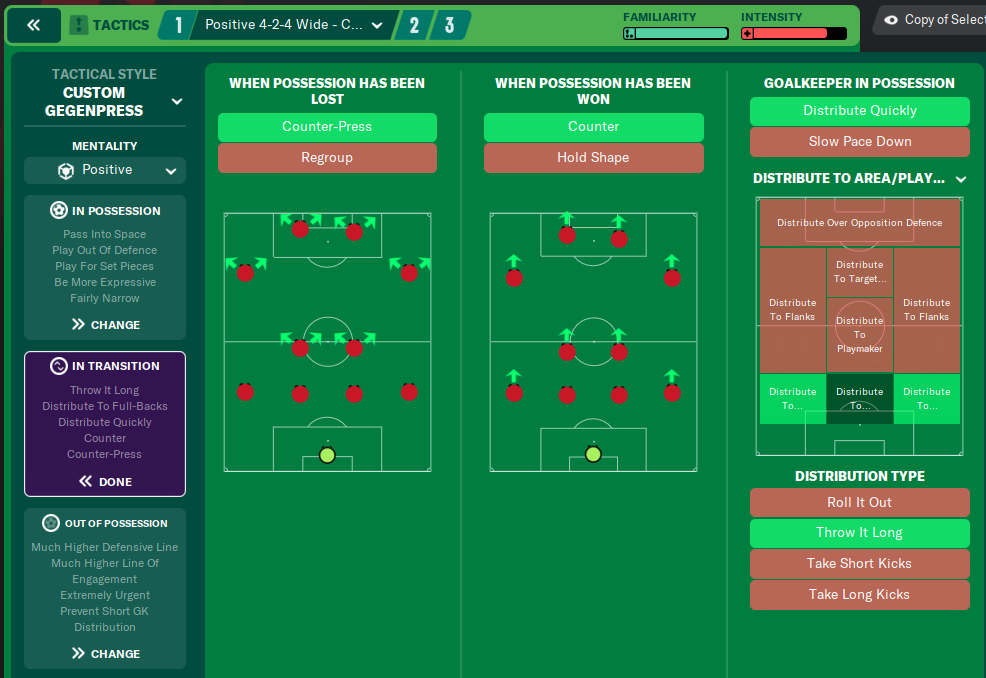 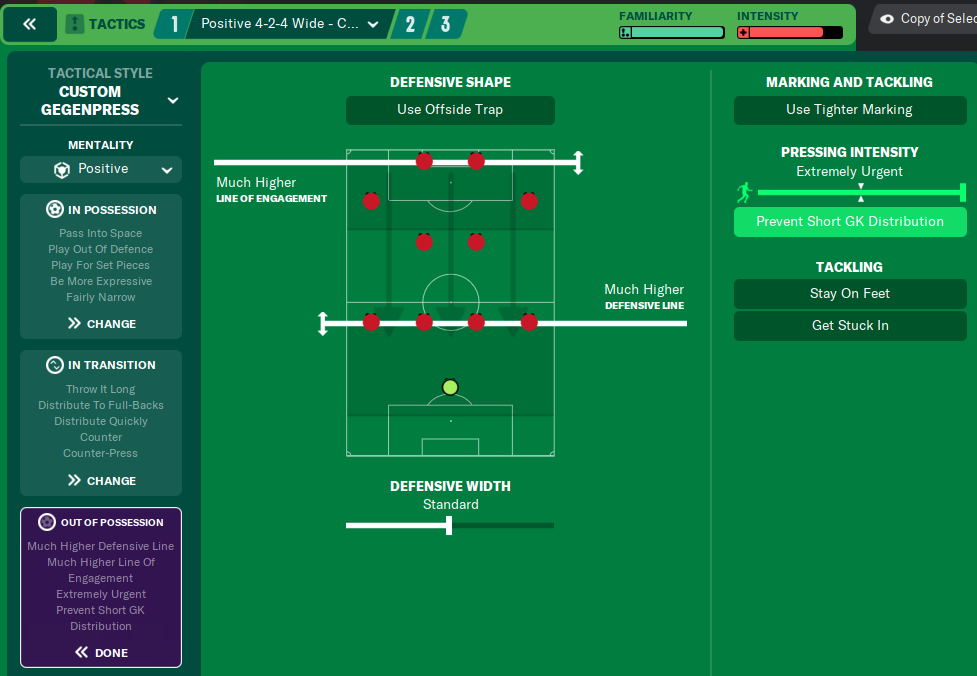 With this set of instructions you will have your team set up mainly on the oppontent's side of the pitch, as you will have much higher defensive and engagement lines. The team will also play out of the back and with a slightly higher tempo, some players are instructed to try more direct passes and that will help move the ball forward more quickly. As a Gegenpress based tactic pressing intensity is extremely urgent and the team is instructed to counter-press and counter when in transition. A fairly narrow attacking width will ensure players by the numbers in the opposing box and the instruction to pass into space will take advantage of your strikers' pace. I also added the Play for Set Pieces instruction as I wanted to take advantage of having two strikers and a couple of tall midfielders in my squad. 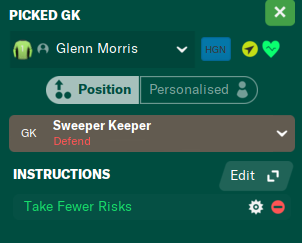 Sweeper Keeper on Defend. Only added the instruction to take fewer risks as I wanted the first passes out of the back to be safe and not give away the ball quickly. 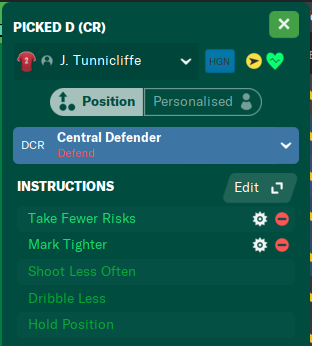 Central Defenders on Defend. Take fewer risks for the same reason as for the keeper, and Mark Tighter so as to ensure that if we are hit on the counter these two players will be on top of the opposing strikers and delay their attack until the rest of the team has returned to position. 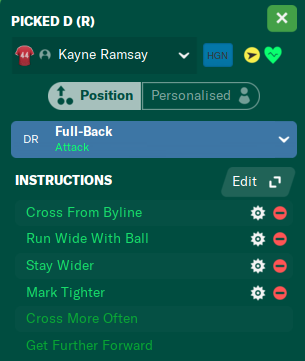 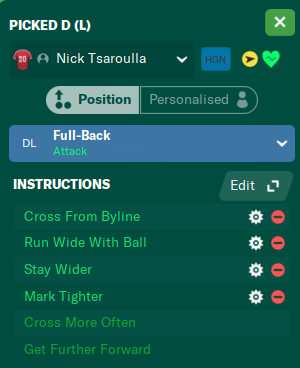 Full Backs on Attack. Their main duty in this tactic is to open up the pitch wide and provide opportunities by getting to the end and crossing. The Inside Forwards will sit narrow and allow the Full Backs space to run free and get forward. I added Mark Tighter so that they return quickly to position after an attack and mark the opponent's wide attacking players. 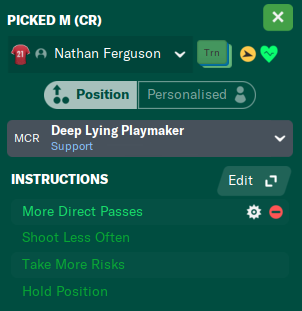 Deep Lying Playmaker on Support. He will be the main key passer in most matches. This player will aim to find the strikers or inside forwards open with through balls, but will also change play to the other side of the pitch and find the Full Backs when they get forward. 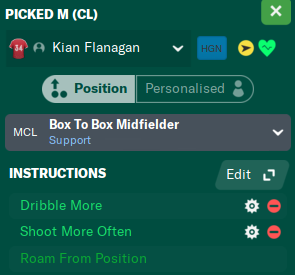 Box to Box Midfielder on Support. This player will carry the ball forward when attacking and get back to help win it back when needed. He can pass the ball to the sides to find the full backs, but he will mostly try to find a place in or near the box to get a pass or a rebound and blast the ball in the back of the net. 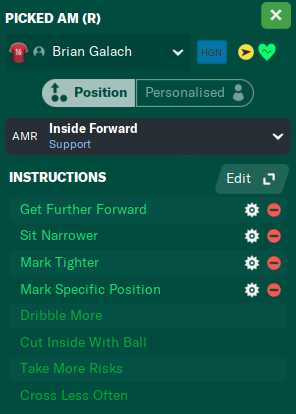 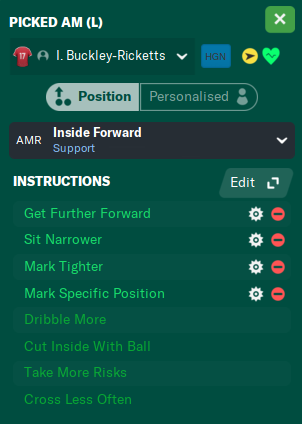 Inside Forwards on Support. The Support duty is chosen to give the team a more flexible formation, as they can get back and join the central midfielders in a middle 4 line when the team doesn't have the ball (they are also instructed to mark the opposing full backs on ther respective side). However they are instructed to sit narrower and get further forward and these will get them in or near the box in almost every attack. having them be good passers also helps, as they will be able to assist the forwards with diagonal through balls that really hurt. The inside forwards will look to cut in with the ball and get it in the box or switch it up to the other side, and once they let go of it they will find their place in the box to receive a cross in the far post. 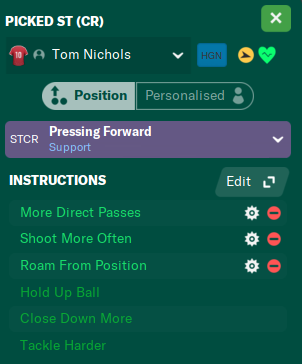 Pressing Forward on Support. He is a striker, yes, but he will also roam from his position and try more direct passes. he may get back a few metres and act as an attacking midfielder sometimes but he will also get in the box and score. 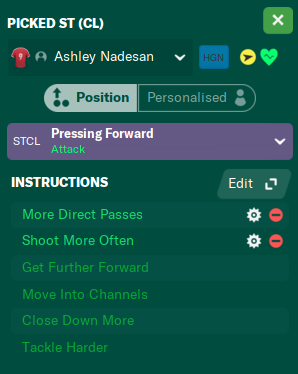 Pressing Forward on Attack. He will be your main goalscorer. A player with good pace here will take advantage of the Pass Into Space and More Direct Passes instructions.


This is quite an attacking tactic, but I found that it worked fine with a sub-top team as it allows you to score and still get quite a solid defense (in my experience most goals came from set pieces and aerial chances, as I don't have very good heading defenders).