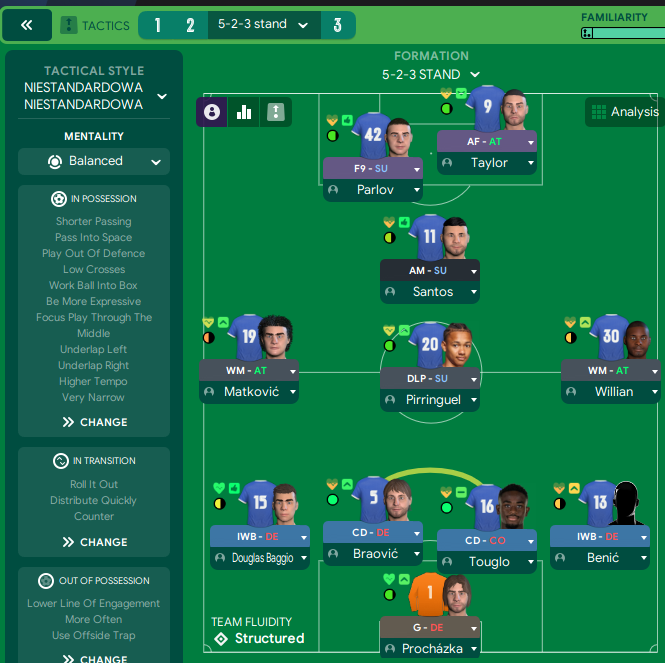 1. What inspired me?
Most of the tactics focus on high defensive lines and higher line of engagement. Also never tried tactic with wide midfielders and inverted wing backs and wanted to do something of my own that would work and i think i managed to do it.

2. What to expect
Overall pretty balanced tactic between offensive and defensive with creating a lot of chances. This is very narrow tactic and focusing mostly on dominating a middle of the pitch and playing a short passes with higher tempo. Don't expect though high possession - this is mostly to focus on enemy mistakes and playing it fast to hit a goal - just mostly to create a lot of chances by counter attacking when there is opportunity or just playing fast and shortly with higher risk passes.

3. Set pieces - i never focus too much on it, just some really standard things.

4. Player instructions - no special instructions, except for wide midfielders - they both have dribble more and higher risk.

5. Recommended players, i won't tell names, i will write on what you should focus:
- IWB - here you need fast players with good passing and decisions, vision as well as tackling and marking - those players are really important in this tactic since they suport our DLP, also it would be good if they have at least decent leg opposite to side on which they play
- About DLP - he needs to be pretty much really universal player - good tackling, marking, passing, technique, vision, and also by good in physical
- Wide midfielders - mostly focus on passing, technique, pace, acceleration, stamina, passing, technique, also it would be good if they have also some defensive attributes and mental is very important - you need pretty much good universal player in almost every aspect, even finishing is important here - they will be quite often players lastly shooting so it will be also very good if they can play both foots, don't suggest yourself too much that they can't play this role decent or something like that - they will still work, i had players having 1-2 stars playing this role - they still made assists and goals and had good scores
- Advanced midfielder - nothing special, just what a game suggest - all those attributes will be good, i would focus personally on long shots, passing, also finishing, technique, dribbling but also try to keep good physical player here
- On strikers - i was playing two very similar players - quick, high dribbling, good finishing, good passing, vision, flair, but i guess playing with high player with good heading will also work, try to also keep right foot player on left side and left foot on the right

7. Most scoring positions:
- Here definitely strikers are scoring a lot, and also advanced midfield is making good numbers as well, in our league(HNL) we are top scoring team with 53 goals, while second team(Dinamo) has 42 goals

8. Other things:
- We change our mentality a lot, depending on who against we play, very often we play positive against teams we sure of winning, in that case i change IWB from defensive to supporting role, sometimes changing also deep lying playmaker to advanced playmaker. And against better clubs we try to play Cautions, or even Defensive. In such cases i move Wide Midfielders to supporting role and DLP to defensive role. Also when playing cautious or defensive - we move to highest possible tempo, we stop playing out of defense and work ball into box - just focusing mostly on counter attacks
- Crosses - if you have some good players with heading and crossing - you can try changing low crosses to something else, this tactic doesn't focus on it, i use quick players with good dribbling and agility - so that's why low crosses work good here, but you are free to try something else
- I guess this tactic can work as well with higher defensive line and standard or even higher engagement line - when we are behind we often try to put more pressure and enemy and it works good enough, but all the matches i start with standard line and lower engagement line - we are trying to just keep our lines close enough
- Also for some timed i played a two strikers on attacking role - but it wasn't working good enough, maybe if you are really playing against bad teams or you are behind it's good idea to try it, but after switching to false 9 i got much better results
- About how goalkeeper should try to make passes - just keep it to what you goalkeeper do best, either Roll it Out or Take Short Kicks

9. Our results - as in screenshot we managed to get to Champions League(actually our first group stage in Europe) with very average players and low salaries - we beat zenit where they have like 10 times more our budget. Though in group stage(Tottenham, Real, FC Porto, we got wrecked, but managed to score 1 point). So far i switched to this tactic around 2-3 seasons ago, we won a league with it and national cup and so far we keep getting good to very good results.