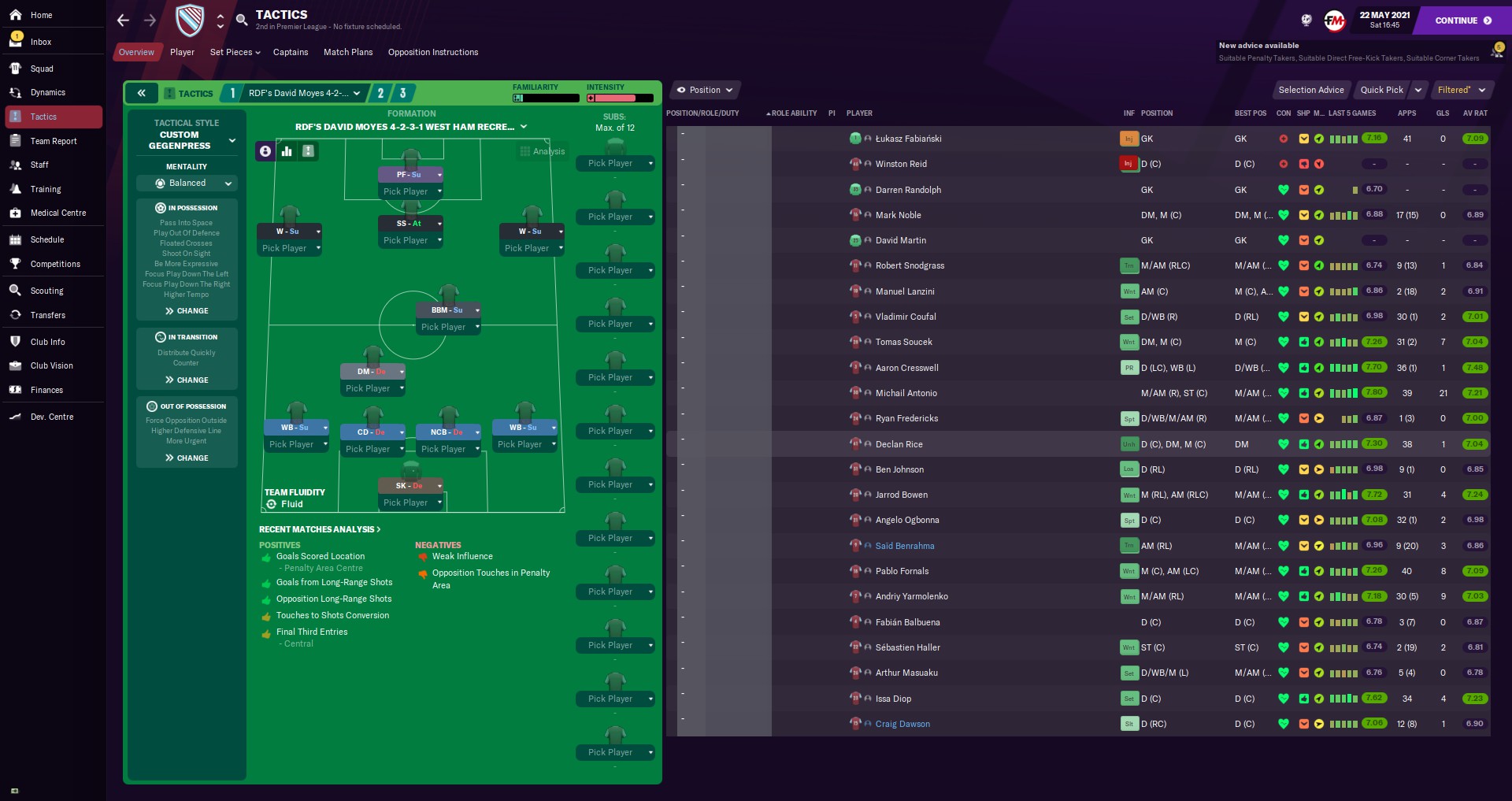 The Hammers kickstarted their positive form this year in a 5-4-1 formation, but ever since the injury to Arthur Masuaku, they’ve reverted to a back-four and the 4-2-3-1 formation that they utilized most prominently under David Moyes. We will discuss the advantages of the 4-2-3-1 from a West Ham United perspective throughout this video and go in-depth with the FM21 David Moyes tactics that go me West Ham into the Champions League

Moyes’ team have kept only 42% possession this season, the sixth-lowest in the league. Since they spend an awful lot of time without the ball, their 4-2-3-1 shape is actually more likely to take the shape of a compact 4-4-1-1, as the attacking midfielder joins the striker in the first line of pressure. One of the strengths of this mid to low block that they deploy is that they remain very, very close together, moving in harmony. The fullbacks and wide midfielders, in particular, are often practically on top of each other in defensive phases, working together to stop attacks. For all their time spent without the ball, it’s impressive that they’ve only allowed nineteen crosses per game. They’ve delivered twenty-one per game to bring some context, which is the joint-third highest in the league.

Going forward, the Hammers win a lot of free-kicks and corners. Importantly, with all of their aerial presence in both attack and defence, they are particularly effective at converting them. Moyes’ team have scored twelve goals from set-pieces this season, the joint-most in the league. West Ham clearly pay an awful lot of attention to their set-pieces in training and it’s paying off for them as a key mechanism in both stopping goals from going in, and scoring them at the other end. It’s not as though they do anything particularly tactically elaborate, they just have a few exceptional deliverers in Aaron Cresswell, Jarrod Bowen, and Said Benrahma to start off. Cresswell is the most likely set-piece taker on a consistent basis, assisting five goals, creating a chance and a half per game, and delivering nearly two crosses per game. But it’s evidently not just the quality of the delivery, but also the threat and aerial ability that so many of their players possess.

In defense, their mix of zonal and man-marking means they can have the exact same aptitude and rarely ever concede. It’s perhaps a bit old-fashioned, but what else would you expect from a David Moyes and West Ham United side? They’ve been very adept at playing to their strengths and for that, the team and manager deserve an immense amount of credit.

West Ham United have been one of the surprise packages of the 2020-21 Premier League season. Their aerial ability and compact defense are there for all to see, but it’s perhaps gone a bit under the radar just how good they’ve been both off the ball and in making the most of their time when they do have it at their feet. It hasn’t really mattered whether they’ve played 5-4-1 or 4-2-3-1, they’ve managed to be defensively resilient and capable goal-scorers regardless. With the Hammers currently sitting in sixth place, they continue to challenge for a place in Europe and look like one of the toughest sides to break down in the entire league. 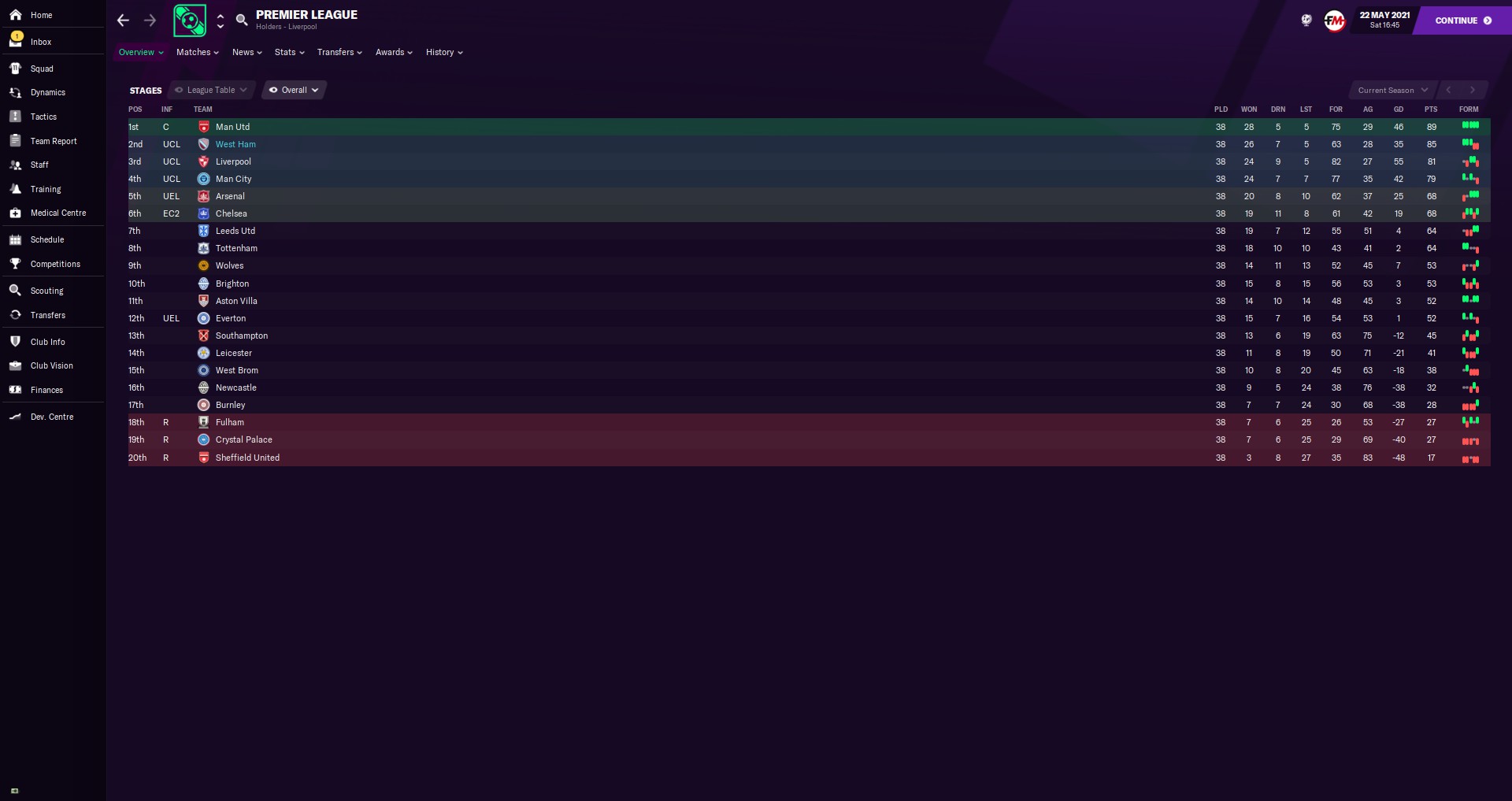 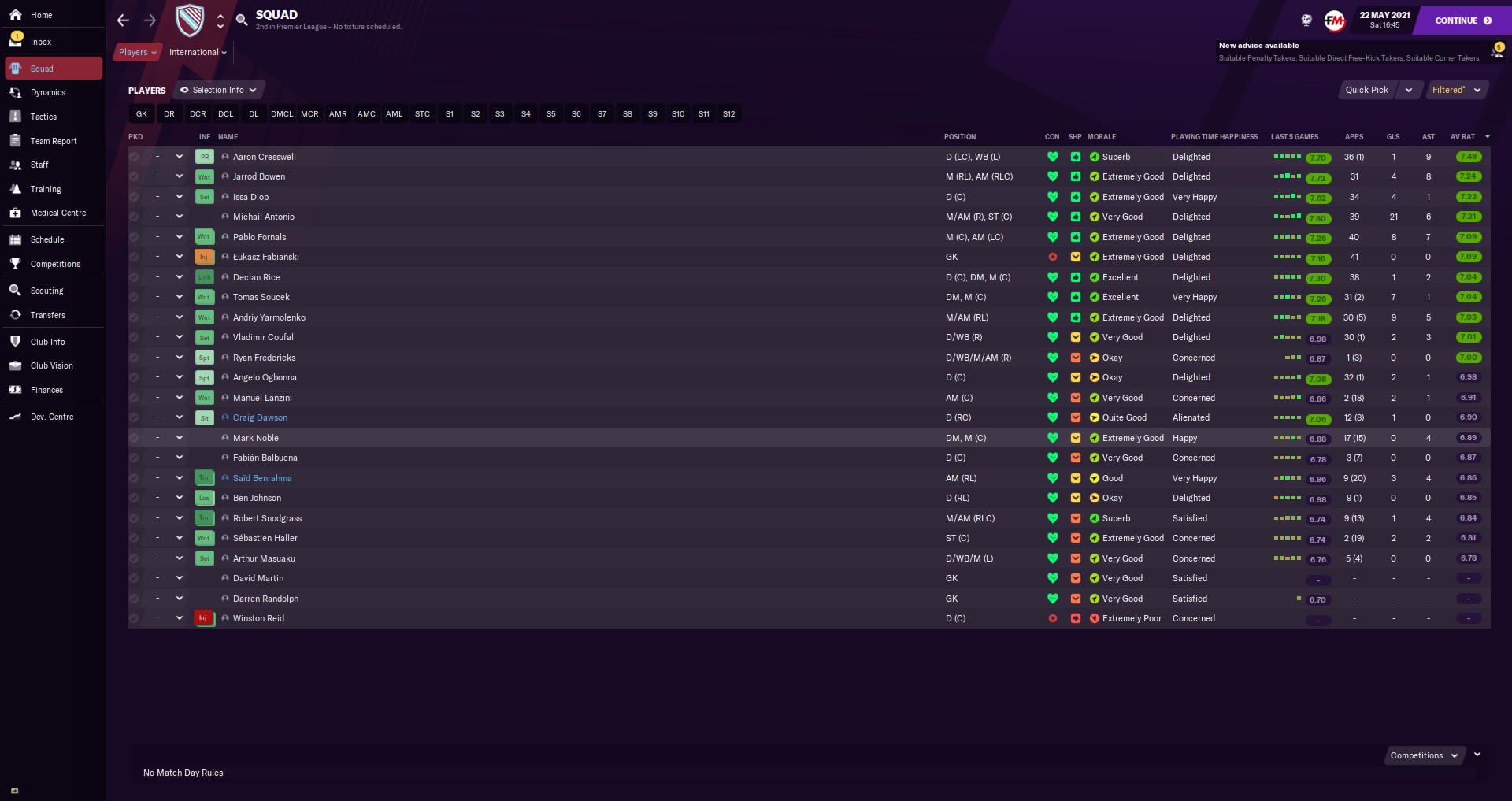 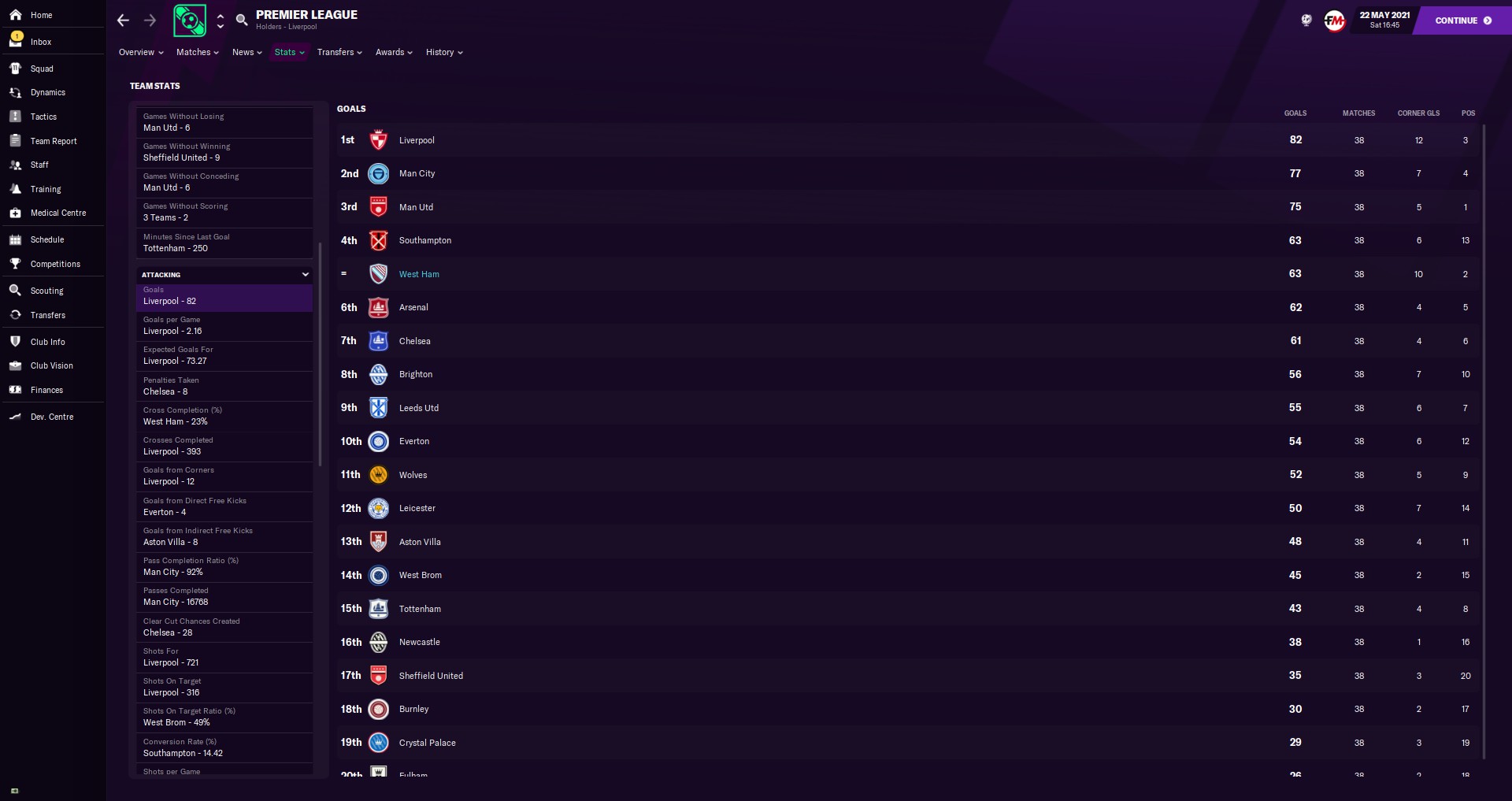 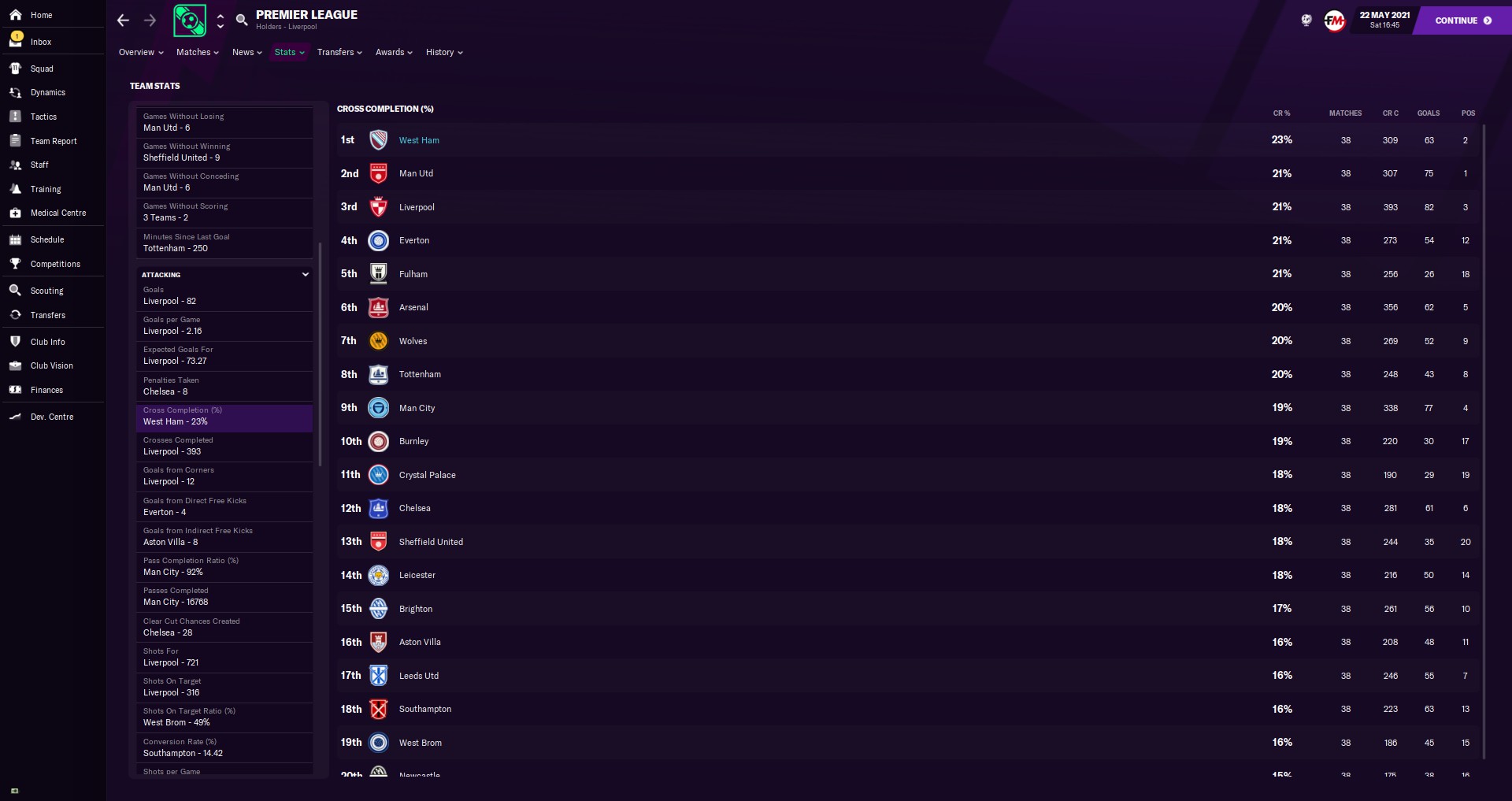 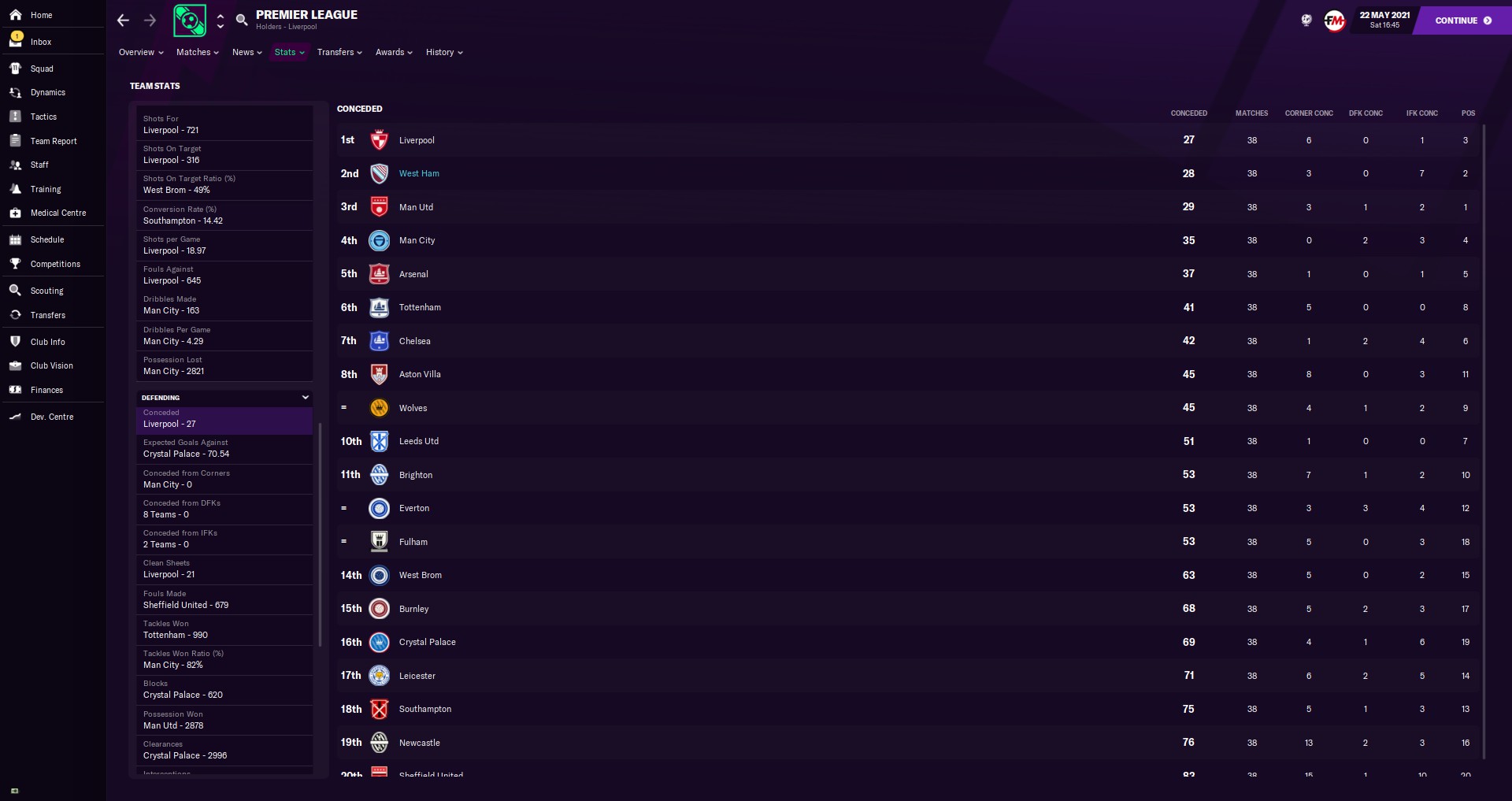