Great to be back for another year of FM and tactic creating.

As soon as i got the beta, i jumped into a new save with my home team Sporting Clube de Portugal and tried to recreate my tactic from last year, a Fearless & Strikerless 4123 that got some great feedback and seemed to be quite successful.

The tactical concept relies on high pressing, trying to regain the ball quickly and hit teams on the break with very dynamic movement and passing, however also being able to break down teams with a lower defensive line that don't allow for fast counter-attacks, setting up in a narrow 4123. 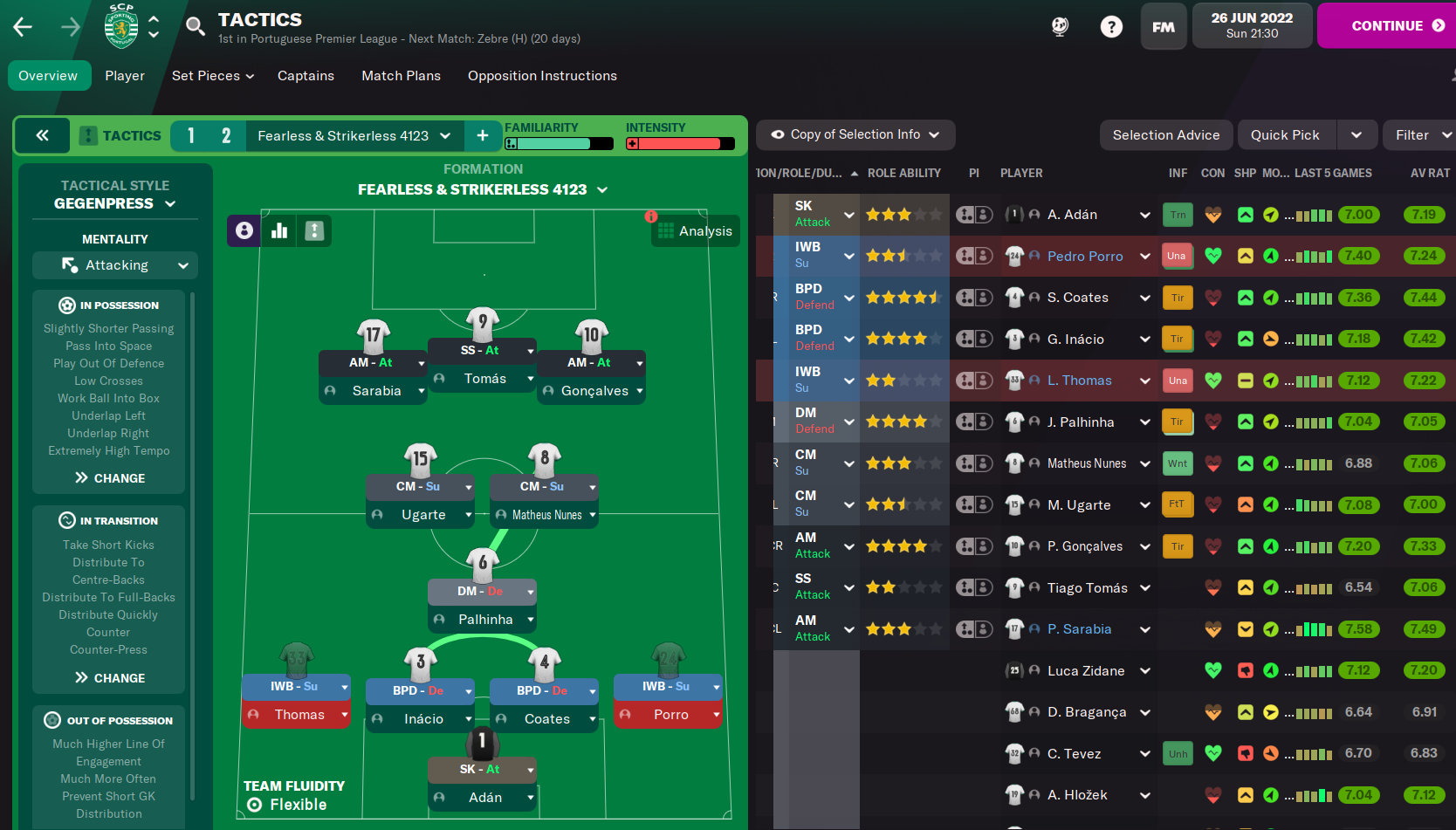 The most important players in the team are the front three, two AM's and one SS in the middle. The SS need to be fast, good off the ball and posess good finishing, as he will find himself 1v1 with the keeper often. The AM's should also posess these skills as they will also find themselves in many 1v1 situations, however more importantly, they should be good on the ball, with good passing, vision, decisons and technique as they are the primary creators within this tactic.

The second line of creators are the Inverted WB's and the CM's, who give balance to the team and are the water carriers in transition. For all these roles, good passing, vision, decisions and work rate attributes are also essential. These players will also see quite a few chances come their way.

The DM is a key role in this tactic. Must have great defensive attributes but also be good on the ball as they play directly behind the SS in the middle of the park when the two CM's open up in play and they will be able to craft quite a few through balls behind the opponent defense, as well as recycle posession. 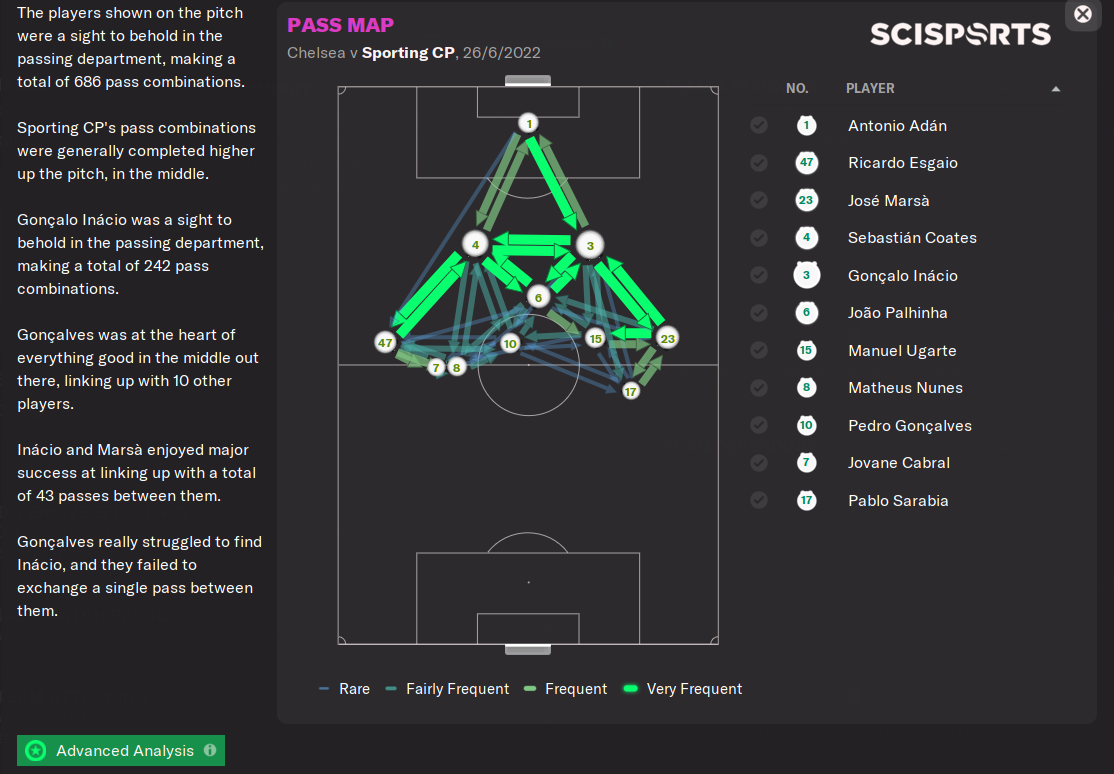 The CB's should be strong and fast, with good passing skills too.

As i mentioned before, i jumped right into a save with my home team, Sporting and considering it's a new version of the game and i was loosely recreating my old tactic from scratch, without any testing or anything, i didn't really have high expectations, i went in with an open mind, because sometimes the match engine is just built in a way that strikerless formations don't work. However, i was in for a pleasant surprise!

With Sporting and this tactic i have managed to win all competitions except the World Club Cup - We won the Supercup, League Cup, Portuguese Cup, League and the Champions League!

We achieved all this losing only 2 games all season - 4-3 away to Atalanta in the group stage of the CL and 3-2 to Chelsea in the quarter finals of the World Club Cup. 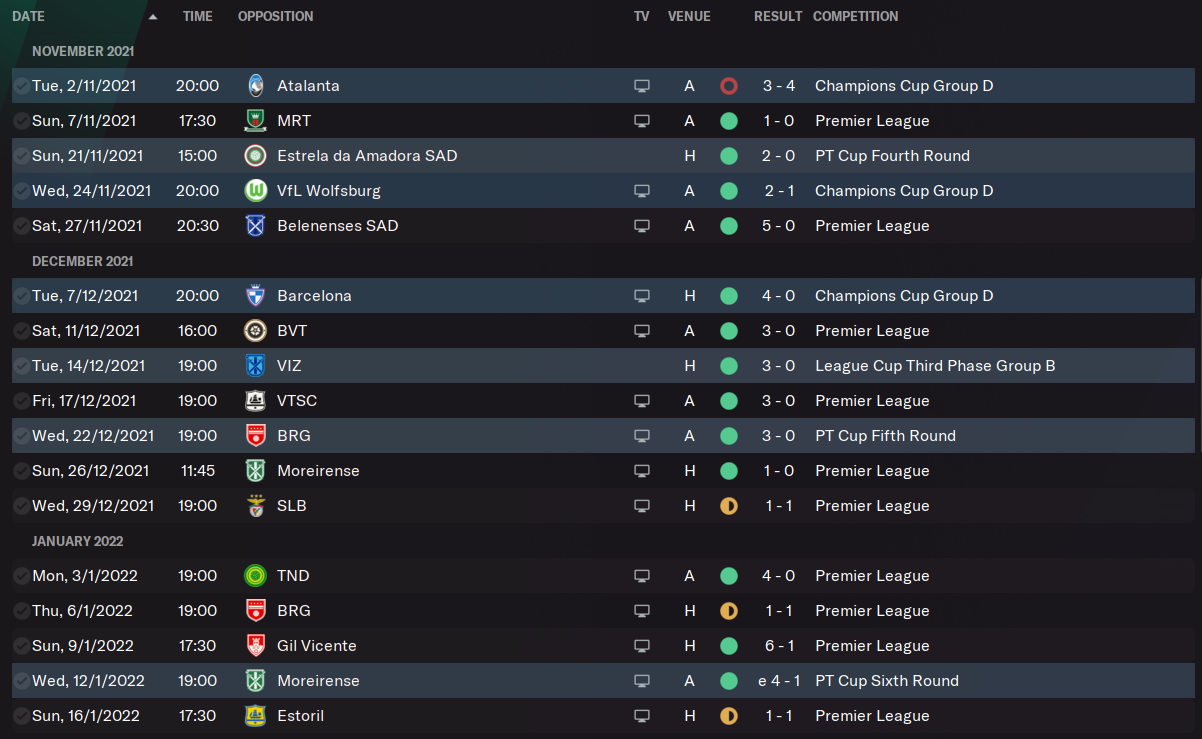 On our way to CL glory, we thrashed Barcelona 4-0 twice and also beat Juventus, Dortmund and Bayern on the way to the final where we beat Liverpool 4-1 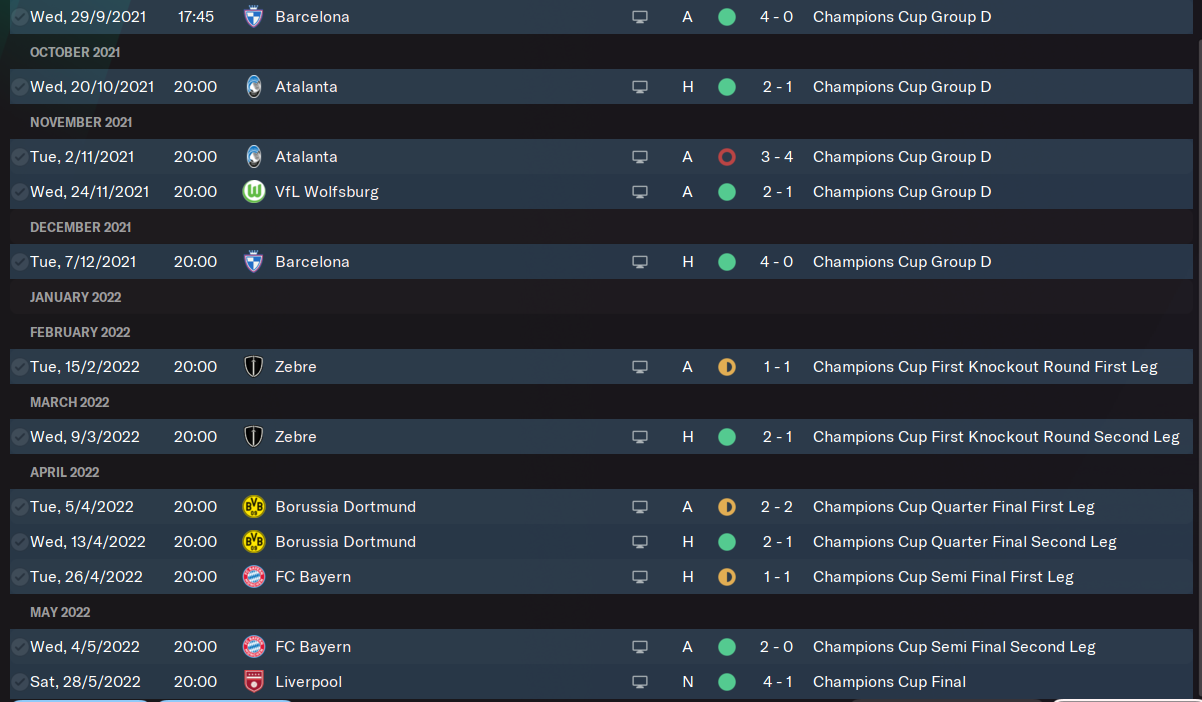 All in all, it was a great season, with some very young and inexperienced players in my starting eleven and on the bench, as some of our best players were plagued with injuries during the season. However i'm very happy with the outcome, especially considering was achieved with just a quick remake of my tactic from last year. This is why i'm so keen to share it again, to try and get as much feedback as possible, as i believe this can still probably be improved. I have not implemented any set-pieces or anything like that, so there is space for further development. I hope you enjoy this tactic as much as i've had this season and please post any and all feedback you might have - looking forward to it!
Reactions: kandersson and White Europe