Hacker - breaking the game with all I know about it V2

Download
Overview History Discussion
Hacker - breaking the game​
First, results of my own run of the FMBase test league to hook you in (these are not official results, I've just downloaded the available save, frozen players, loaded the tactic and simmed the season). 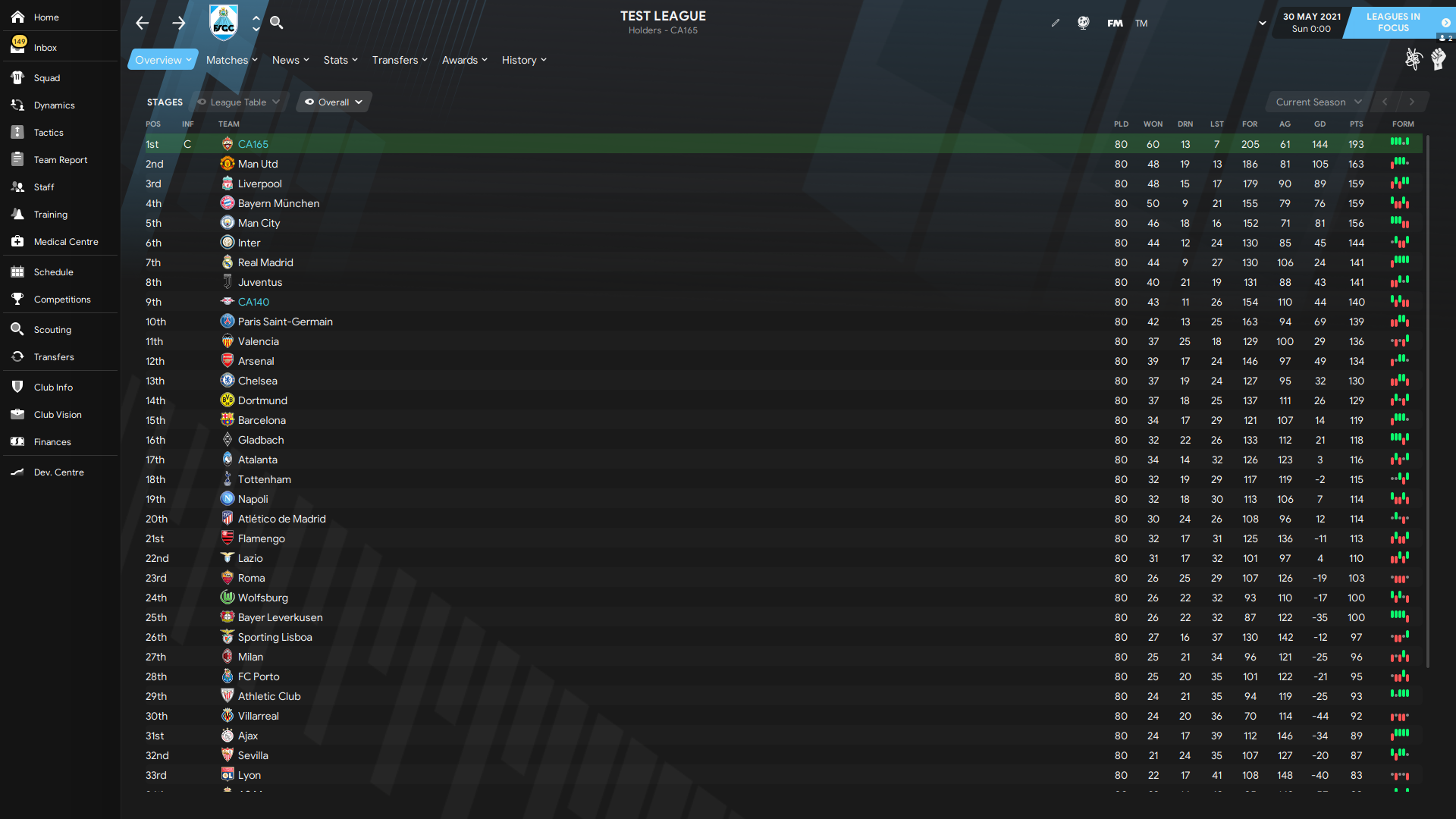 As you can see, both test teams total to 333 points which would put this tactic at the top of the test league (how good it will do in the official test, we will see). 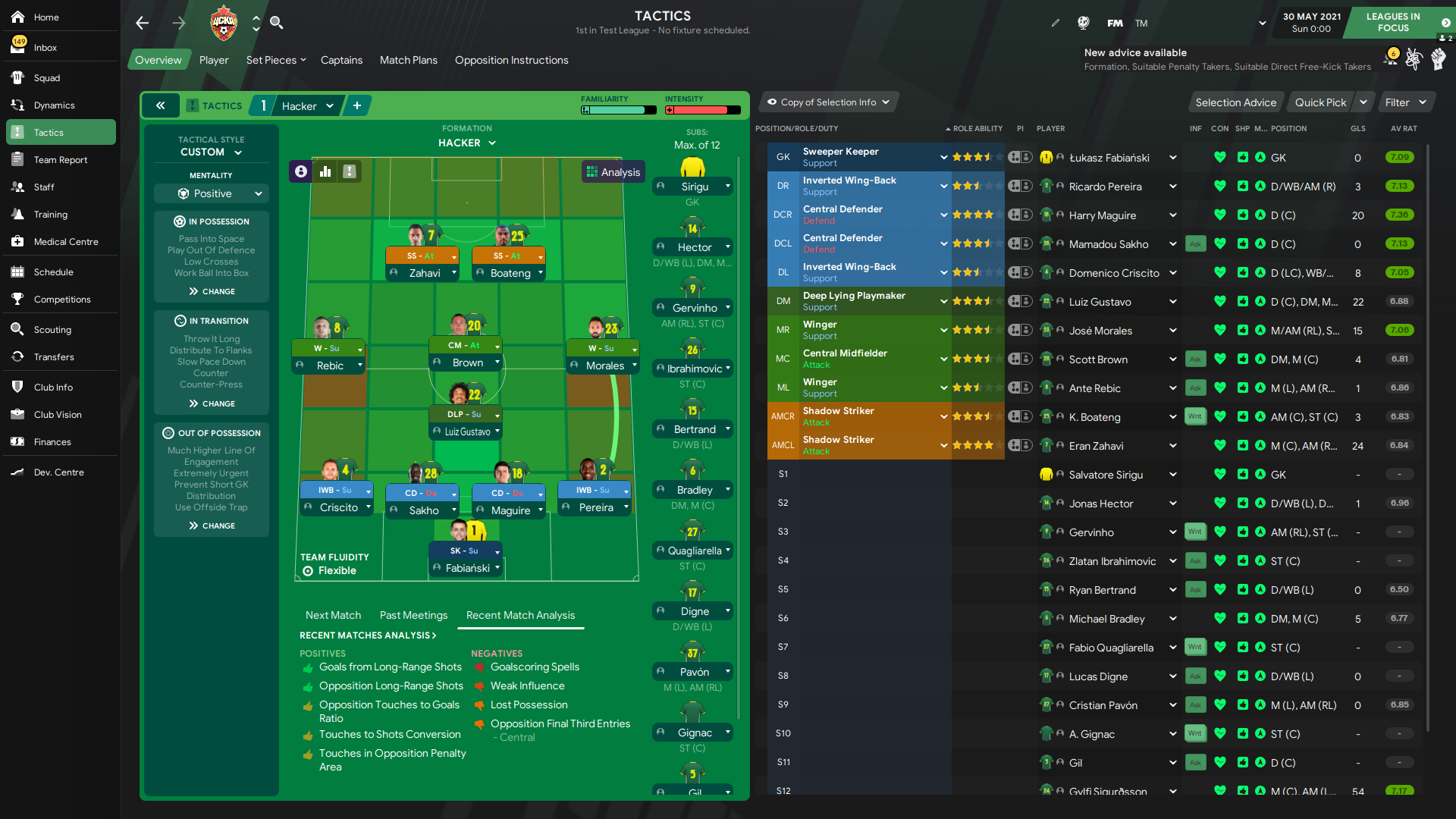 I've played hundreds of games this year, tested a huge amount of tactics, and created quite a few tactics on my own.

I've been purposely avoiding the 4-1-3-2-0 formation when creating my own tactics before, because it's the most popular formation amongst the top tactics (for a good reason), and I wanted to create something unique. But I've now decided to put all my knowledge about tactics to use and create the best one that I could. The goal is to create a tactic that will first get 340 points, and then 350 points here on fmbase test league. So far I've managed to achieve 333 in my own tests, as you can see in the screenshot, but I'll be focusing solely on improving this tactic right now, looking for tweaks and all the possible improvements

Some words about the tactic itself:

It uses the 41320 strikerless formation, which unless some new groundbreaking idea comes out and shakes up the meta, I believe to be the best formation there is, mantaining a good balance between defence and offence.
Formations with strikers can be better when it comes to goalscoring but I find them to be strongly inferior in terms of defending.

Adressing similiarites between this tactic and other tactics out there:

Yes, it is very similiar to other top tactics like Pheonix 3.0, Pheonix - APDM or ZaZ - Blue, but like I said, my goal with this tactic is not to create something unique or original, it is to create the best tactic possible, and there is a reason those tactic are so good - some of the roles are simply too good to ignore if you want to create a tactic that will break the game.

I've posted some schedules with one of my tactics before, but I'm still not 100% set on them, and I'm looking for something better. For now, general advice would be to use at least 2 match preparation sessions before every game - I always use attacking movement and then one of Defensive Shape/Teamwork/Att. Corners/Set Piece Delivery. Use Recovery + Match Review after every game (if you have full tactical familiary you could possibly drop match review), and if you have a free slot somewhere, put team bonding there, it also adds bonus to your next game and is a really low intensity session.
I'll be constantly looking for the best schedules possible, and when I'm satisfied with something I'll post it here.

Individual training I always do by myself and just set it to role the players plays in. If I see someone that is lacking massively in an important attribute for his position, I'll add aditional focus for him. 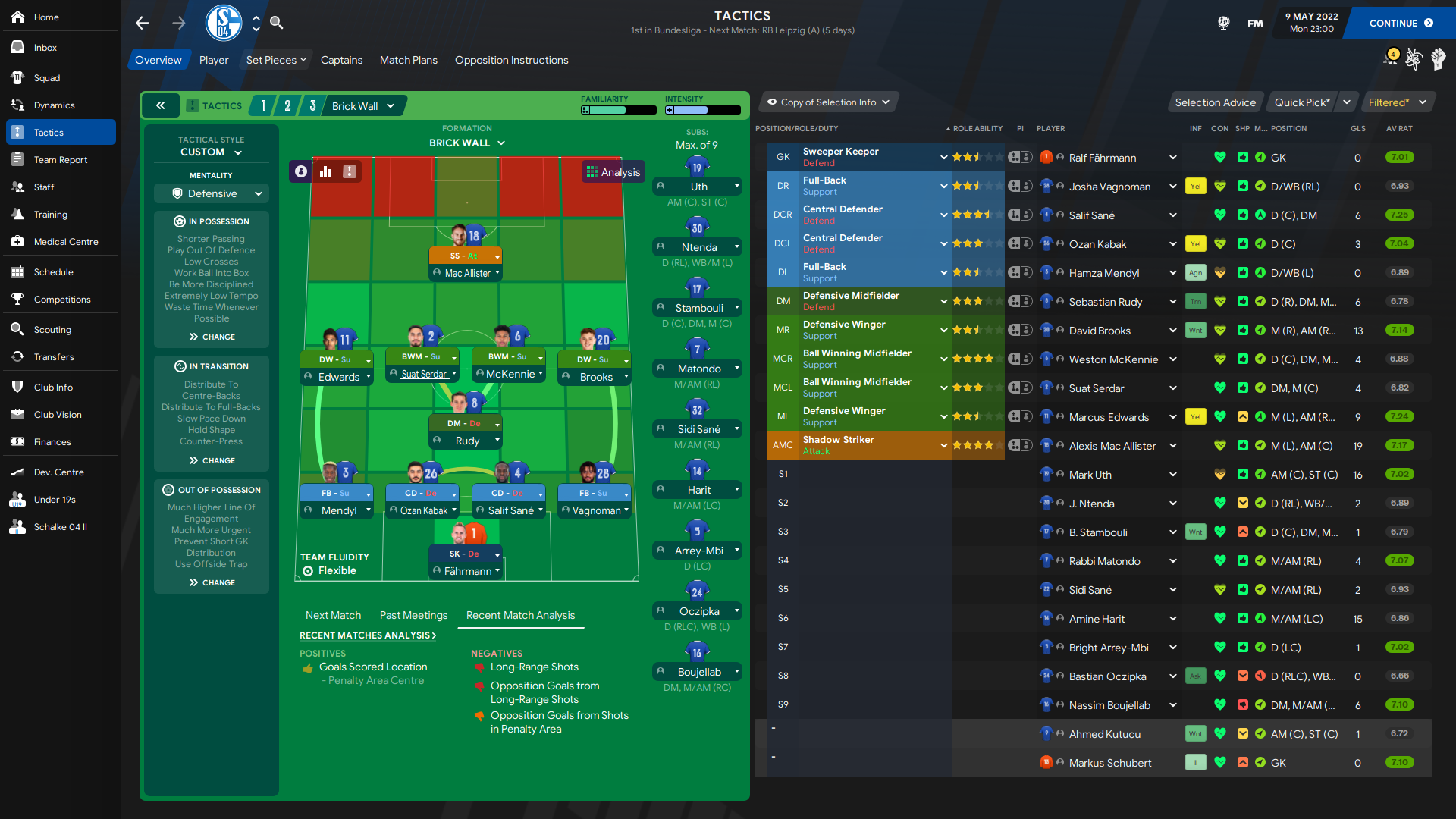 Here is a tactic to use together with Hacker to defend the lead late in the game - it has set pieces made specifically for time wasting, and I don't have any stats on me at the moment, but I almost never concede with it, just sub in a defensive-minded midfielder for one of your shadow strikers and you're good to go. It completely shuts the game down - you should see no highlights whatsoever after you plug it in. I'll add it in a separate post because there is no need for it to be tested (because it is purely time-wasting tactic).


What type of player to look for:

My general philosophy when it comes to buying players in FM is just to buy everyone that's under 21, has high potential (4/4,5 stars+ for your club), and at least: 12 Determination, 11 Natural Fitness and 10 Work Rate.

To add to that Pace and Acceleration are good for any position, and you can't go wrong with a player that has high Decisions. These are generally attributes that I look for in every player.
Other that that, just look for the attributes suggested by the game for the specific role.

Pre-game:
Team:
After you win a couple games, you should have an option to say that the media are praising them and they should prove them right (it should be the last option in the list) - always use this, it is really really good, and almost always works.

Indvidual:
Simple, always use the first option - "I have faith in you", always works no matter what.

Half-time:
When winning always praise, when losing say you expect more/are disappointed in their showing, when drawing depends if you're an underdog or a favorite - "you weren't that bad but there is more to come from you" isn't bad, but if you're a favorite I find just scolding them to work better, and if you're a heavy underdog, praising works better.

Here's a code of conduct I use to reduce number of yellow and red cards throughout the season, players usually happily accept it (or are neutral), and I never really get more than 2 red cards in the season. 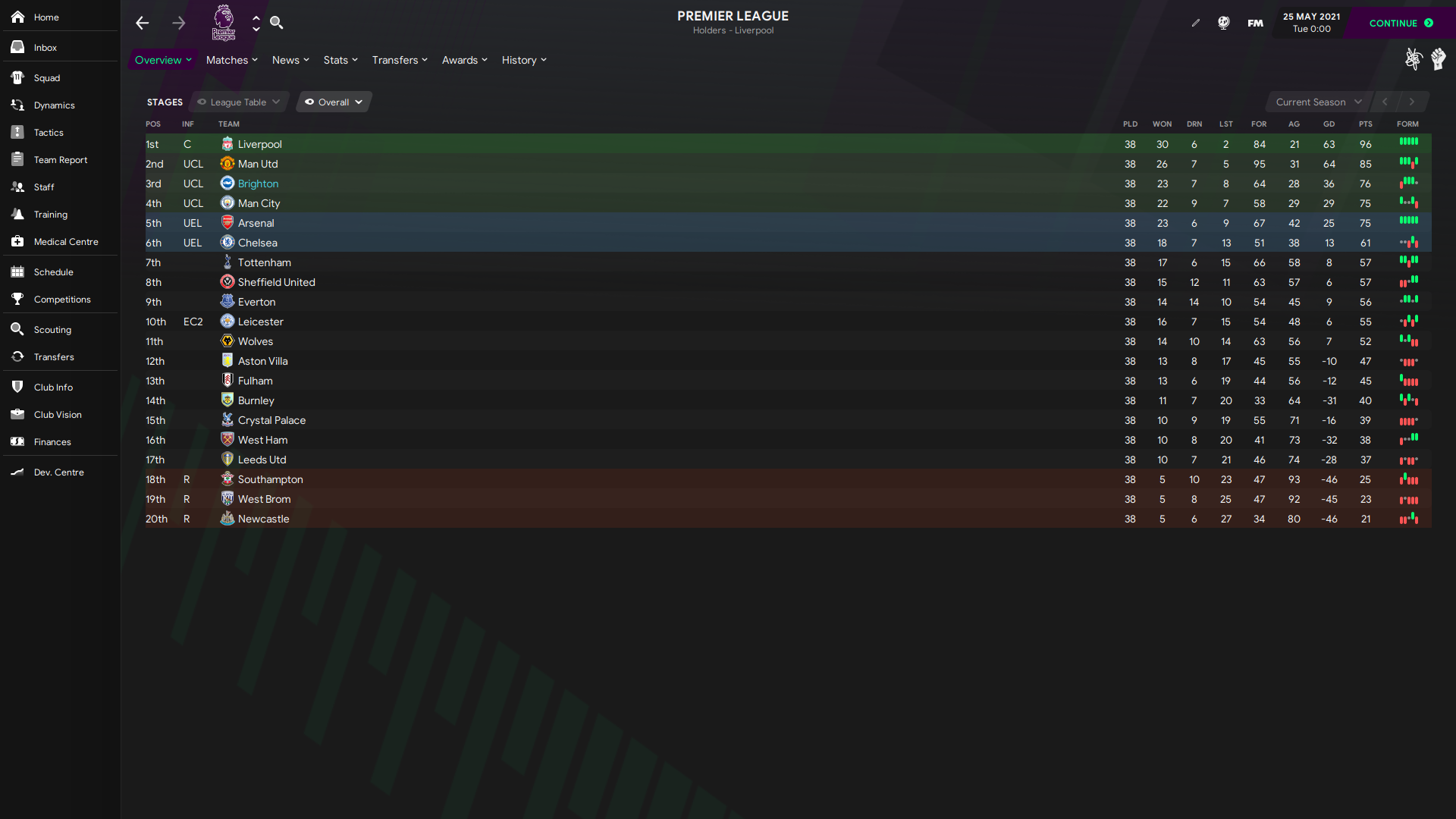 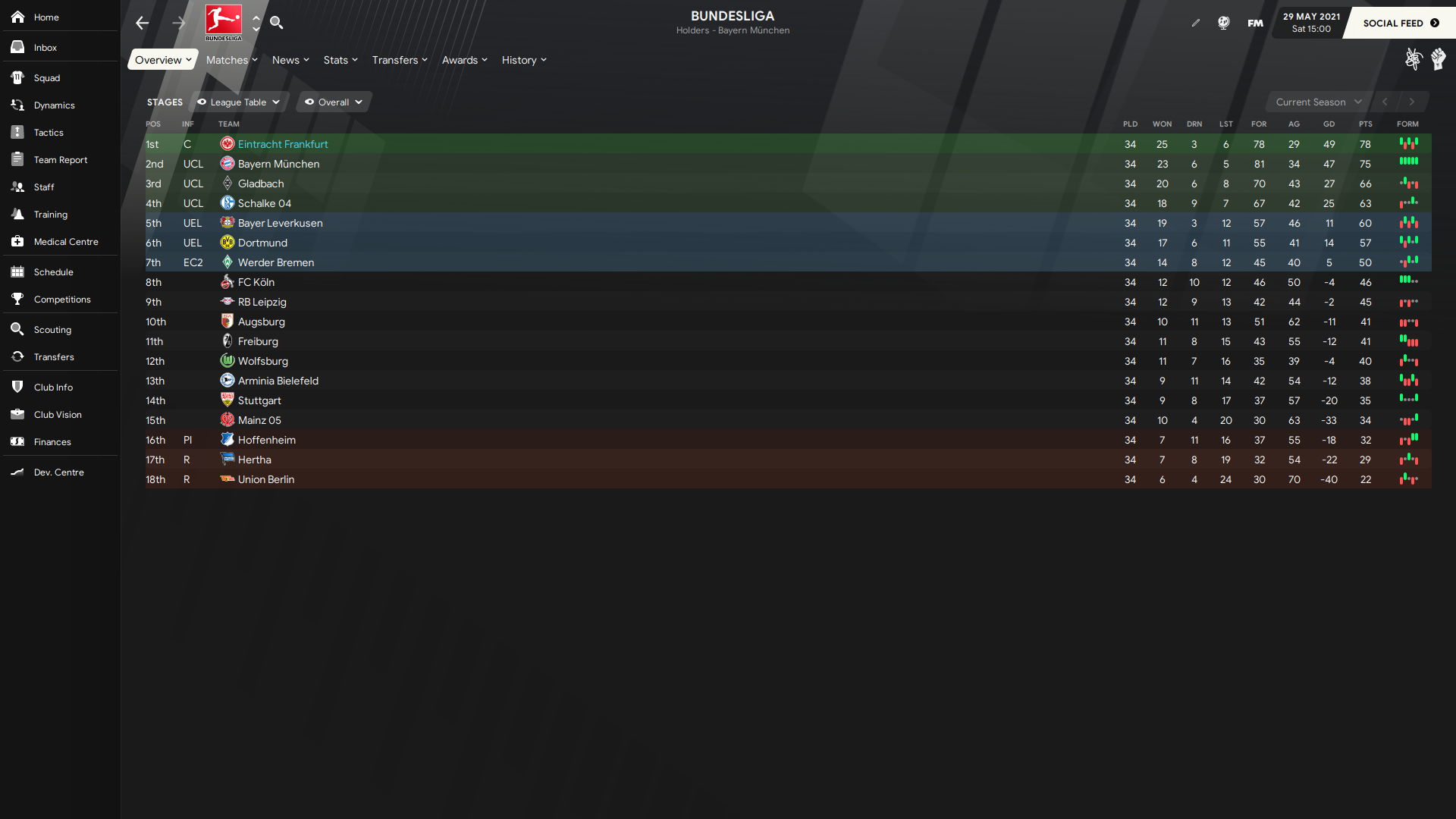 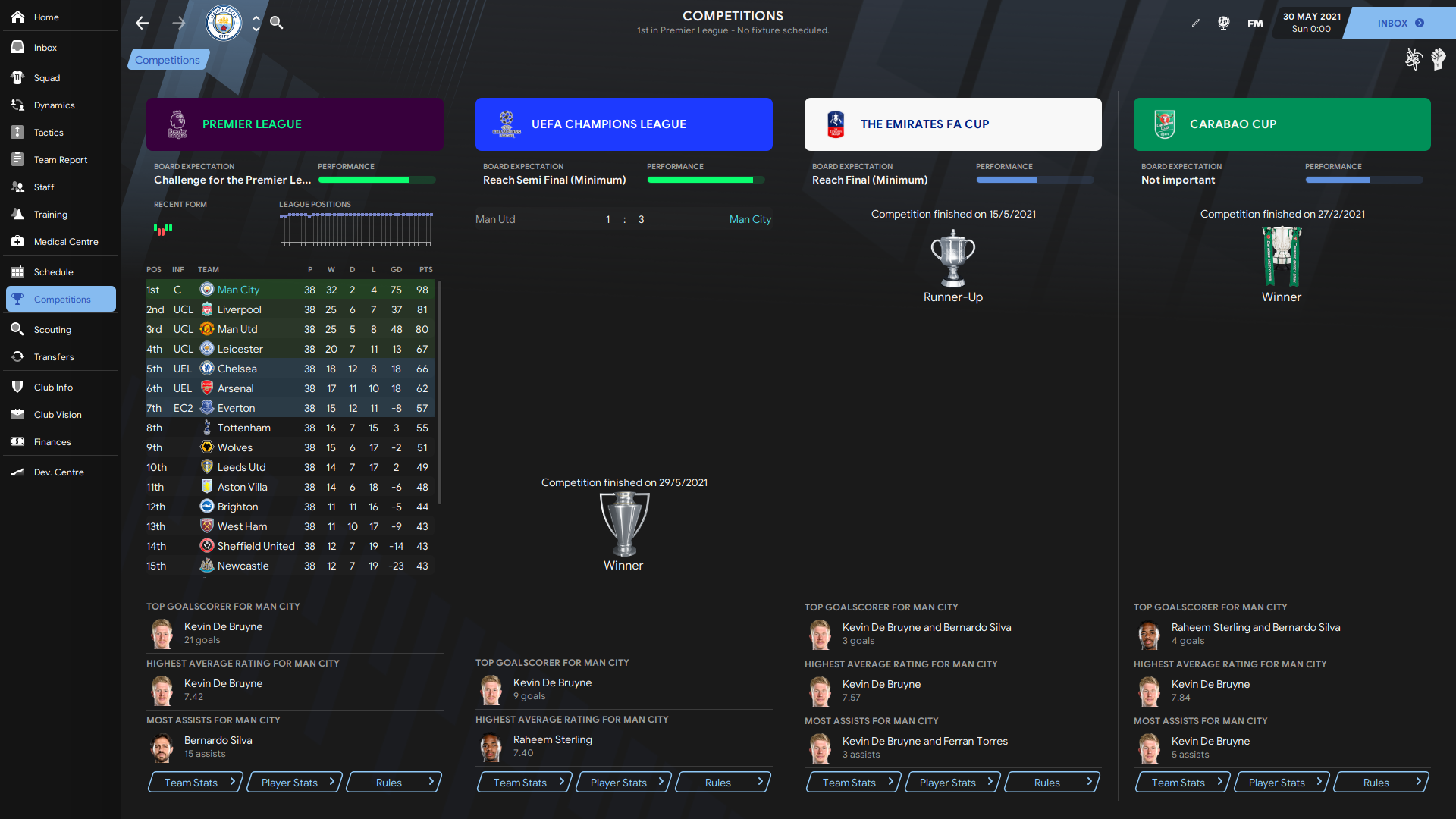 As I often modify my training schedules because it's hard to create one training schedule that will work on everything, here is a little guide regarding training sessions for this tactic so you can build and modify your own schedules


Building your own training Guide ​
How to build schedules:
Use 2-4 match preparation sessions per week (+ team bonding) depending on how much you value match results vs player development and how confident you are you will win the game (the stronger you are the less match prep you need)

Use Match Review after every game until you have 100% tactical familiarity, then maybe you can replace it with some low intensity session.

Recovery is your friend, Rest not so much - don't have more than 2 rest session per week, it will decrease match sharpness of your bench players heavily - Recovery won't and it greatly reduces injury risk.

I would use sessions in "The Best" tier every week, and I wouldn't use "Decent" more than every 2-3 weeks. If a sessions not here - I don't reccomend using it.


The Best:
Attacking Movement
Team Bonding - low intensity, increases happiness, team cohesion, teamwork and teamwork for the next game, use always when you have a slot:

Good:
Teamwork - use when you have low team cohesion, or in pairing with att. movement when you are favorite/playing home next game
Defensive Shape - useful when playing away/underdog
Att. Corners
Set Piece Delivery
Community Outreach - it's not a match prep session, but it's low intensity, increases teamwork and team cohesion, when you have a free slot somewhere you can put it in

Situational:
Penalties - I use them almost always before cup games, safes you a lot of nerves when there is a draw
Def. Corners - when you are a heavy underdog - opponent will get a lot of corners so it's useful then

The Best:
Attacking Patient - Best attacking session in my opinion, works on all the important attributes for both units, except maybe dribbling (that's why it's important to switch sessions every now and then)

Decent:
Defending from the Front - it's a heavy pressing tactic, it's useful to improve defensive attributes of your attacking unit every now and then
Attacking Shadow Play - when you want to have a low intensity day you can just pair it with defensive shadow play
Chance Conversion
Chance Creation

The Best:
Defending Engaged - all good attributes for both units + tactical familiarity

Good:
Aerial Defence - Heading is always useful for defenders, for both attacking and defensive corners

Decent:
Defensive Shadow Play - pair with Attacking Shadow Play for low intensity day
Play from the Back & Attacking Overlap - more attacking-focused defensive sessions, but it's good to put one of them every now and then - you want your defenders to be able to pass ball accurately to your other formations and not just hoof it mindlessly. Attacking Overlap is especially useful for Inverted Wing-Backs

Good:
Physical & Quickness & Endurance - all work on really really important attributes - usually I go for Physical when I have a lot of fixtures to play and don't want to risk injury (as it's less intensive), and for Quickness/Endurance when I play only 1 game per week all the time (I'm currently using one schedule with lower league team when I have both Endurance and Quickness every week)

Decent:
Tactical
Goalkeeping & Shot Stopping - I try to have one of those two every other week so goalkeepers can get a little bit of attention