Hi everyone.
I used to recreate real life tactics back in FM17/18 and post them on here quite often with much success (feel free to check out my post history).

I've taken a couple of years out from playing FM and after watching Spurs beat City 2-0 in true Mourinho Double Deckered Bus fashion, I decided to have a tinker at trying to recreate a similar style.

From reading online and looking at a lot of other successful tactics on here & other websites, it seems like the new match engine starting from around FM19/20 has a bit of an overpowered meta towards attacking/gegen-pressing orientated tactics which is a shame. So this motivated me to want to create a defensive, counter-attacking direct based tactic with some level of success even more.

Note that this isn't by any means perfect, nor how Tottenham always necessarily play against weaker opposition. However my aim was to create something that was relatively plug-&-play and had a "clean sheet first" mentality. I also have no idea to what degree of success one would have with a team other than Tottenham, given that their current squad has players of a high quality that suit this approach.

The most difficult role to get right is obviously Harry Kane. As a False 9, he's scoring, assisting and coming back to defend. This season he has been an absolute machine and no role in FM can get your lone striker, clearing shots off your goal line & making blocks in the box unless you employ some sort of strange swapping instruction with one of your DM/CMs. He dropped deeper as a Pressing Forward on Defend but his goal threat significantly decreased. So it's important to remember that we have to be as pragmatic with the match engine as possible. 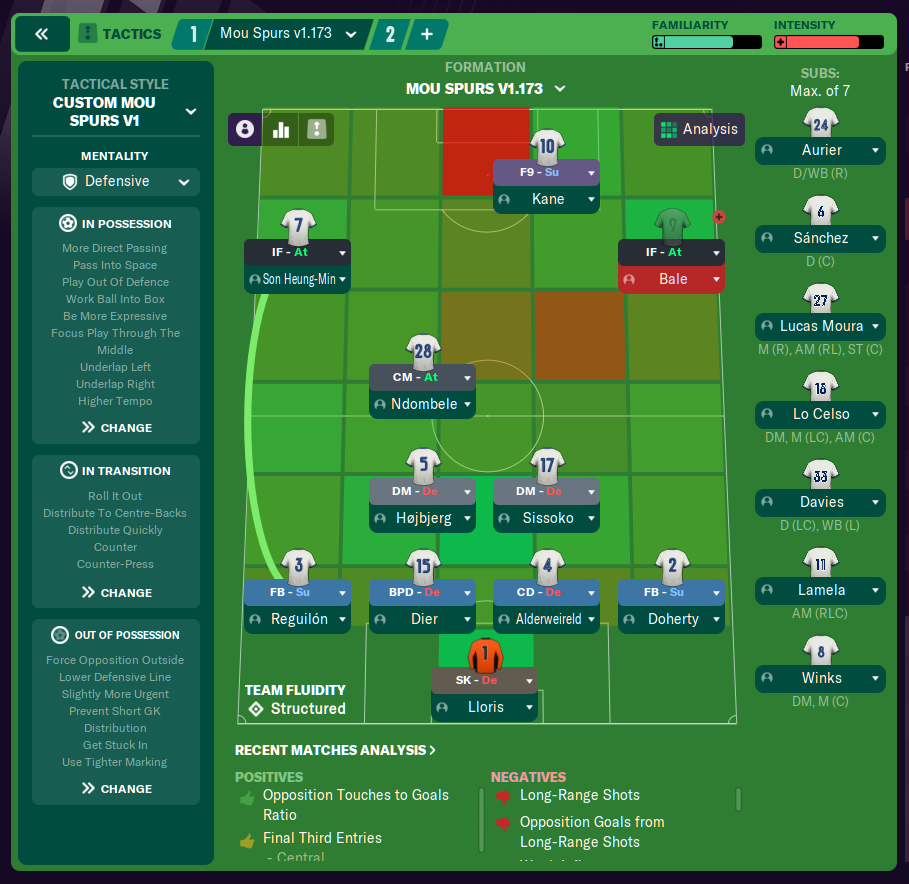 Home - As above.
Away - Change the mentality to Positive.
Opposition playing 5 ATB formation with Wing Backs? - Defensive, regardless of Home or Away.
Opposition Instructions & Training/Match Prep - Joao Sacramento (Assistant Manager)

Now, you might be wondering, how is it logical to be more attacking, away from home?

Well, at home, teams sit back more against you therefore you are able to carve out more chances on a defensive mentality since you have more room to breathe.
Away from home, teams attack and pressure you more, as well as keep the ball more, so on a defensive mentality your team just goes in to complete park the bus mode & it becomes more difficult to get forward. So changing to positive helps you exploit the space teams leave against you away from home better.

If for whatever reason, it goes really bad and you need a goal at home, change to Positive.

Half way through the season (around the start of the January transfer window) is when the game looks at where you are in the table and refreshes the AI teams with how "hard" you are. So if you're quite high in the table, teams will start sitting back against you, etc.

This is why people sometimes find tactics stop working half way through a season. Be prepared to be creative and switch between the Home/Away variations at this point based on whether the opposition is going to sit back against you or attack you. If they're going to sit back against you as a bottom half table team, consider going Positive even at home. If they're in the top half of the table then stay Defensive at home because they will look to attack you. Basically, just do your job and manage your team to grind out results. I got the results below without much micromanagement.

The shape is the same 4-2-3-1 we saw in the win against Manchester City yesterday. The only thing in hindsight I would probably change is making Alderweireld the BPD rather than Dier, but this isn't too significant of a deal as both are technically strong.

Both Sissoko & Hojberg blocked the half spaces between the full backs & center backs that nullified City's inside forwards, to almost create a back five at times.

Ndombele pushes up and presses alongside Harry Kane to give it that 4-4-2 look off the ball at times, whilst the wide players come inside to create a bank of four.

Whilst to many, two defensive midfielders is very overkill, I think there's lots of room to tinker with those roles against easier sides where you don't need as much defensive focus. I think a Segundo Volante might do well with a player like Ndombele alongside a Sissoko or Hojberg who will sit deep. Or maybe going for a more playmaker role to partner a lone defensive midfielder, think Khedira alongside Alonso, behind Ozil, under Mourinho at Madrid where Alonso's passing ability was important and he'd push up a bit further. Winks could suit this perhaps? 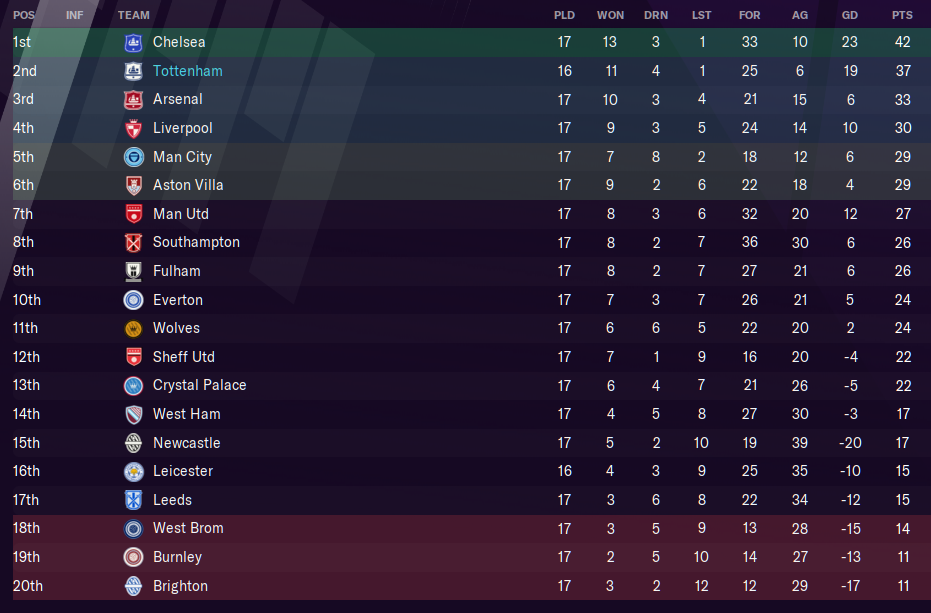 I don't have time to play more than half of a season (or deal with the headache that is the January transfer window), but I want to focus on the fact that we've only conceded 6 goals. If this were to continue, we'd beat Mourinho's record at Chelsea in the 2004/05 season where his team conceded only 15 goals.

The football isn't great. The possession isn't pretty. But if you don't concede, you can't lose and with players like Kane, Son & Bale up front, you will score goals. Grind the matches out.

I know this also goes against how some people enjoy playing the game, which is with these match engine breaking 3 striker, gegenpressing tactics that score 100+ goals a season, which is fine. So if that is what you're looking for, this isn't the tactic for you. But, it does feel satisfying to have broken the typical match engine meta. 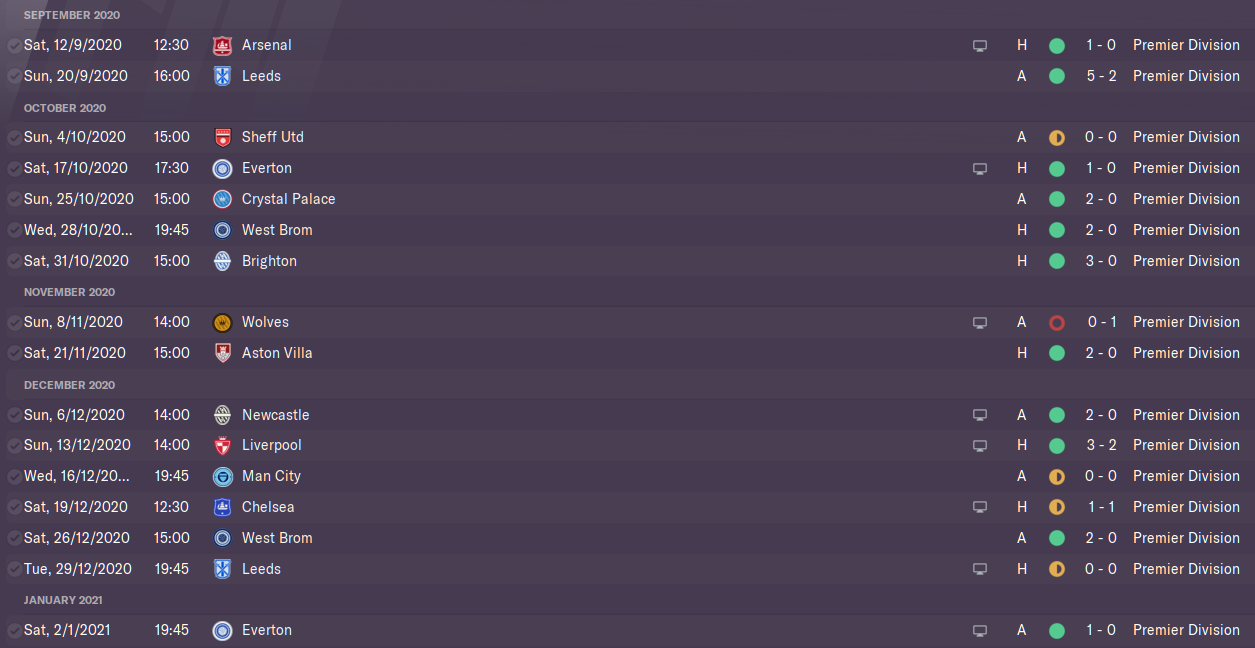 Our only loss was away at Wolves. The tactic struggles against the teams who play with 5 wing backs (even though we beat Brighton 3-0, it was a tough game). Usually the best way to nullify these systems is to match them, otherwise off the ball you get outnumbered in midfield. I'm sure the loss could've been avoided if I was actually managing the team rather than sped up key highlights + plug & play.

We beat Liverpool which I was very happy with. Both of their goals were 30 yard strikers from Wijnaldum & Milner. This isn't surprising because when you defend deep, you're more susceptible to facing long shots. But it was surprising that they hit the bullseye both times. But then again, perhaps not because Lloris was injured for a while and we had Joe Hart in goal.

The matches versus City & Chelsea were also good results given the circumstances. Remember that Spurs suffer from significant fixture congestion because they're playing in the Europa League & Carabao Cup all at the same time too. I tried to rotate my squad as much as possible but it was difficult with the registration rules which meant tired legs were certainly a thing. The most important thing was that we conceded one goal against both Chelsea & City combined, which was a decent return for plug & play. 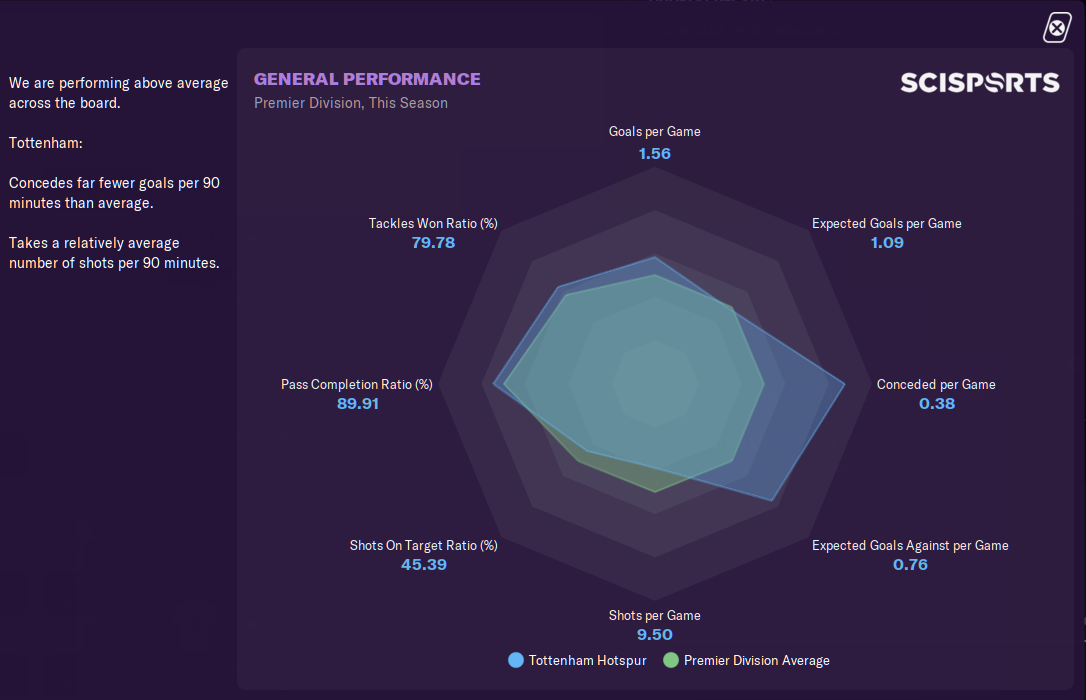 The tactic lacks going forward, as one would expect. I think Son is a little bit underwhelming within the game despite his attributes being pretty decent. He seemed to shoot straight at the goalkeeper quite a lot, which was confusing given his 15+ finishing/composure. I definitely think player instructions can be tweaked to potentially get more out of them, so feel free to comment with suggestions. This is what the thread is for.

Not as explosive as the anomaly numbers we have seen in real life however as we can see, Kane is thriving in that False 9 role, contributing with a pragmatically decent number of both goals & assists alongside his defensive play.

I actually think he'd score double this number of goals if he was changed to an Advanced Forward which I think is the most overpowered striker role in the FM21 beta at the moment. It might even help with the counter-attacking because he's actually up front when it's hoofed forward versus deep in a defensive position. But doing so would go against how he's positioning himself in real life at the moment.

I also suspect that changing the wide players from IF's to Wingers with an emphasis on low crosses might also get more goals out of both wide players. You just need to experiment really.

Tactical Familiarity seems significantly more difficult to get to 100% now than what I remember when I could just manually set Match Preparation to Tactics. A lot of players still seem clueless on how the system works. I imagine counter-attacks will become more fluid once that Tactical Familiarity increases as well. I'll give it a go when the game is released with FM Touch.

Credits:
The tactic uses the attacking corner tactic found here, even though unfortunately it hasn't led to too any goals: https://fm-base.co.uk/threads/fm21-corner-scoring-tactic-cornerer-scorerers.164519/#post-2504758
Reactions: White Europe