Download
Overview History Discussion
I recently came across this interesting concept from RDF. My immediate thought was this would make a great possession-based tactic. I encourage you to check out his tactical overview and get more information around his ideas and thoughts on positions, roles and styles of play.

When reimagining and tweaking this tactic I wanted to change the style of play from a high tempo and counter-attacking to a more progressive and patient possession-based style. The shape stayed the same, however, the roles of some players have been changed. 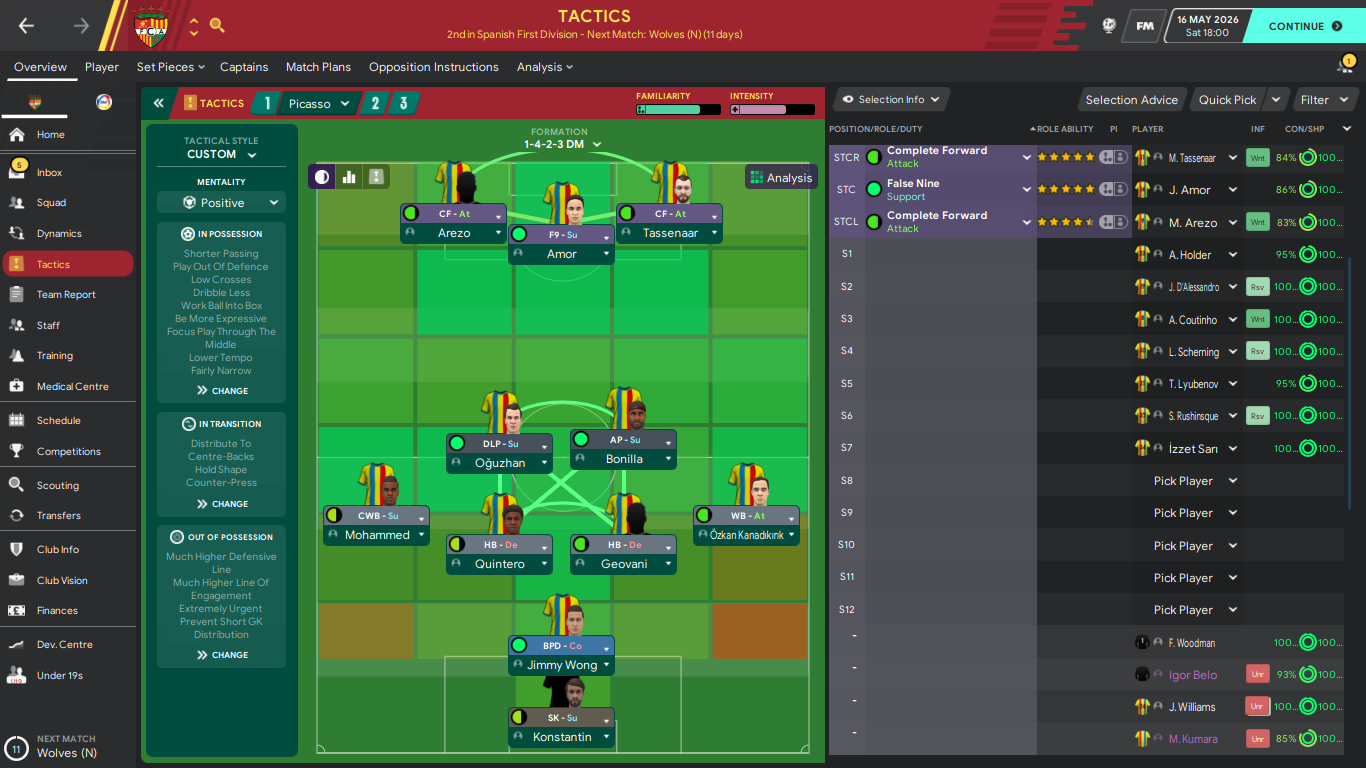 The Sweeper Keeper is on now on support rather than attack, I still want the keeper to be quick of his line and cover the areas around his box, but I want him to pass the ball short building the play from the back.

Centre back is now a Ball Playing Defender on cover, this is to continue the theme of building the play from deep. He will look to pick the ball up from the GK and then distribute the play to the Halfbacks or Wingbacks. When defending he acts as a sweeper looking to mop up loose balls.

Centre Midfielder is now Deep Lying Playmaker on support. He will look to control the tempo and again this will help to play the progressive patient possession game we are seeking. He will act as a screen for the defensive line when possession is lost as he will hold his position by default letting other players make runs and create space for him to play intelligent passes. good traits for him switch the ball to other flank, dictates tempo, plays risky passes and curls ball.

The tactical approach is overhauled to ensure the team dominates possession, whilst not hampering the team's goal threat. To encourage a patient possession game the team is asked to play a shorter passing game alongside a lower tempo. As the team is strong through the middle of the pitch it makes sense to instruct the team to utilise this area. To aid the pass-first mentality dribble less is selected, whilst be more expressive is also selected to help unlock stubborn defences.

The biggest differences between the tactics come in the transition, I look to counter-press to force the opposition to either kick the ball long for the sweeper to mop up or to make a mistake so the ball is won as high up the pitch as possible. Once the ball is won back players are instructed to hold their shape rather than counter, as we want to encourage possession this helps and as the formation is so aggressive we already have lots of players in advanced areas of the pitch.

The team is instructed to play the highest line possible which is taken to the extreme with our halfback essentially playing as our Centrebacks. To help win the ball back as fast as possible I deploy the highest line of engagement. 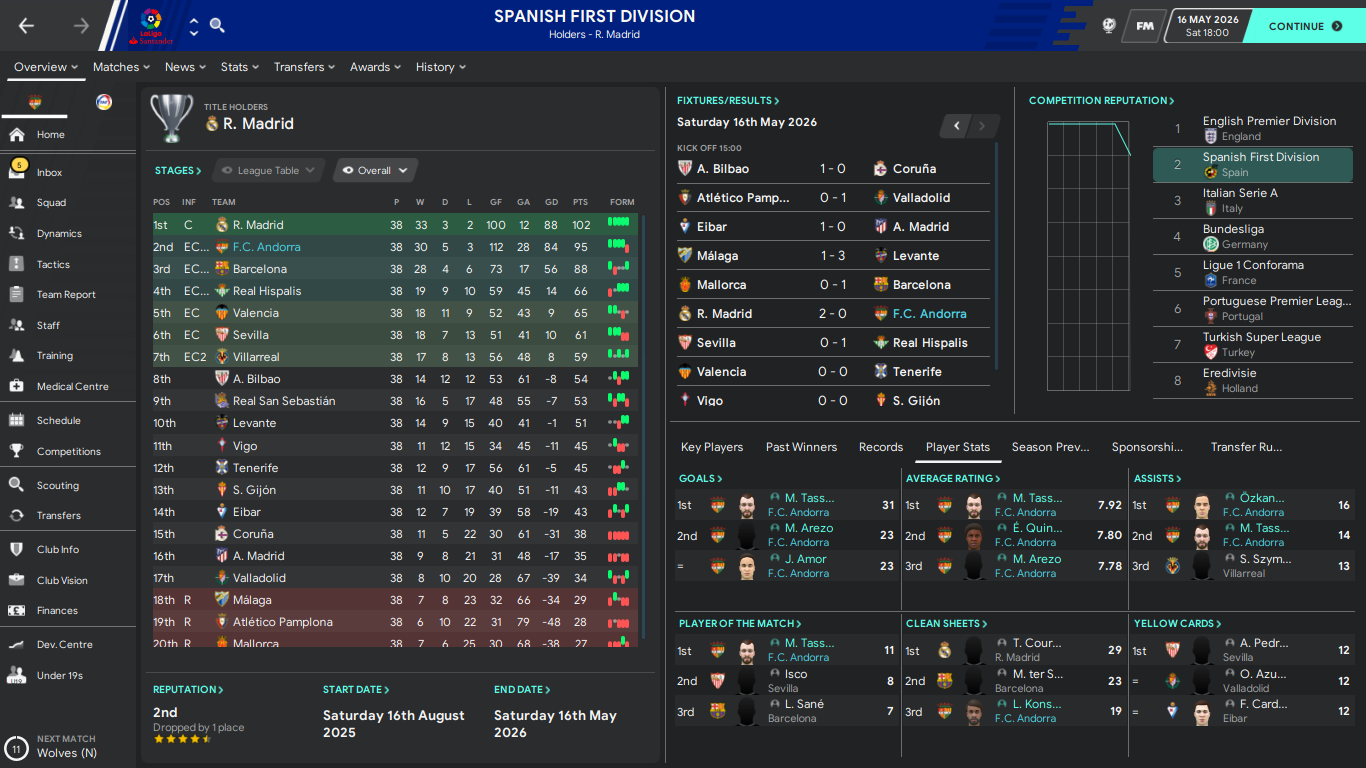 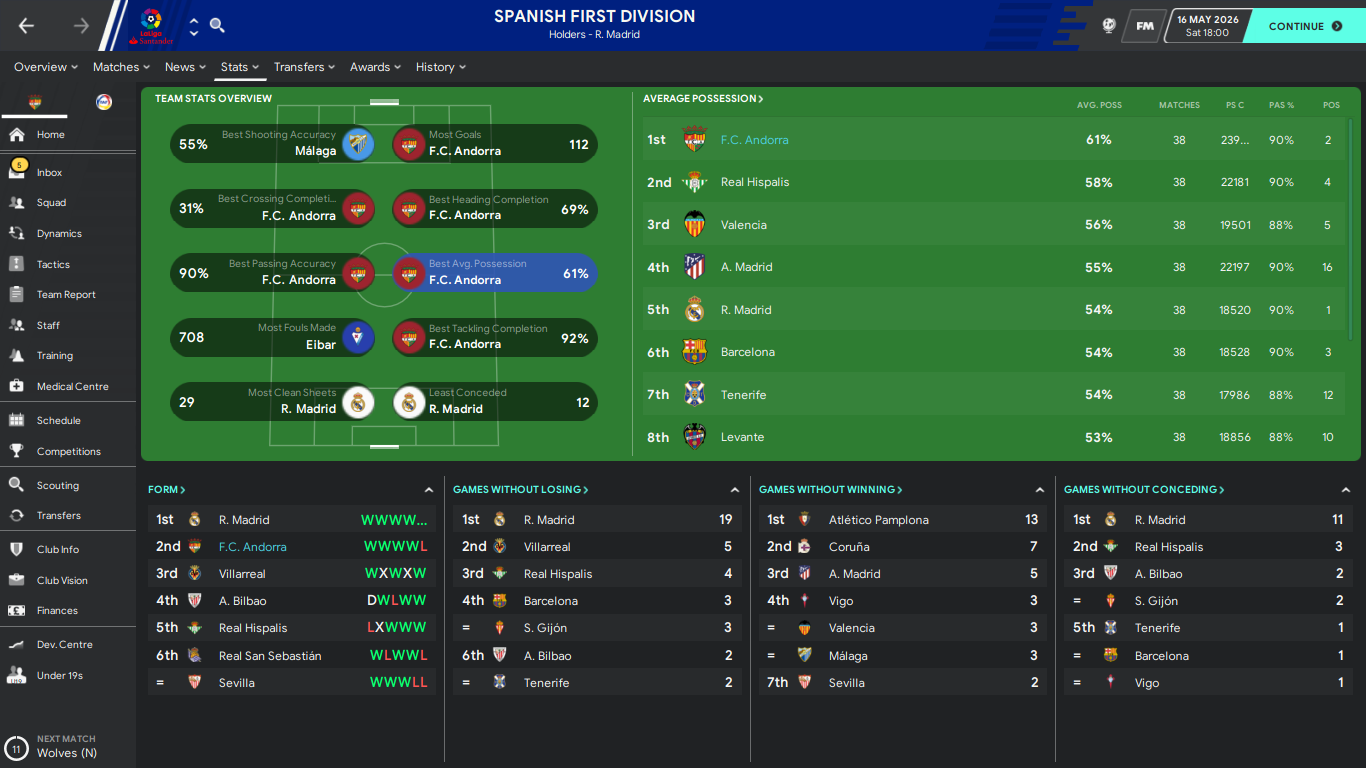 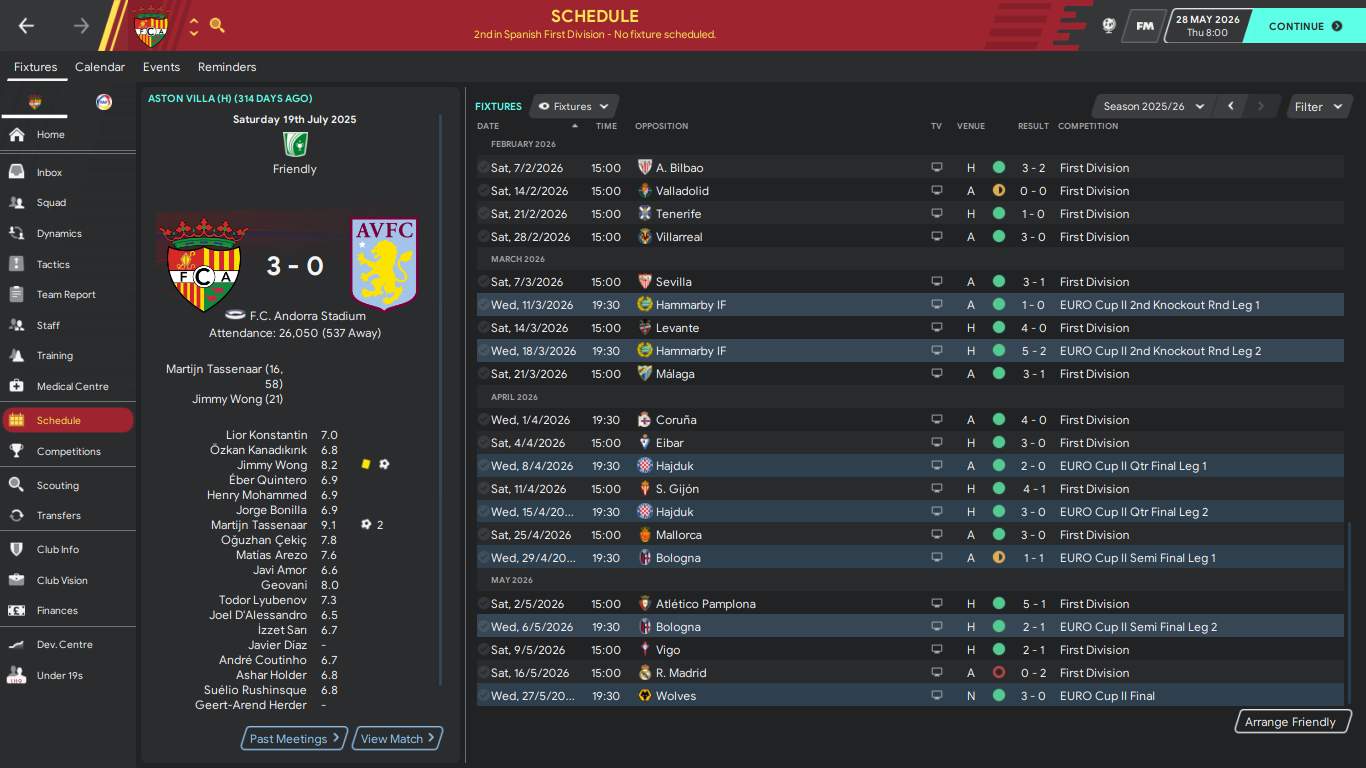 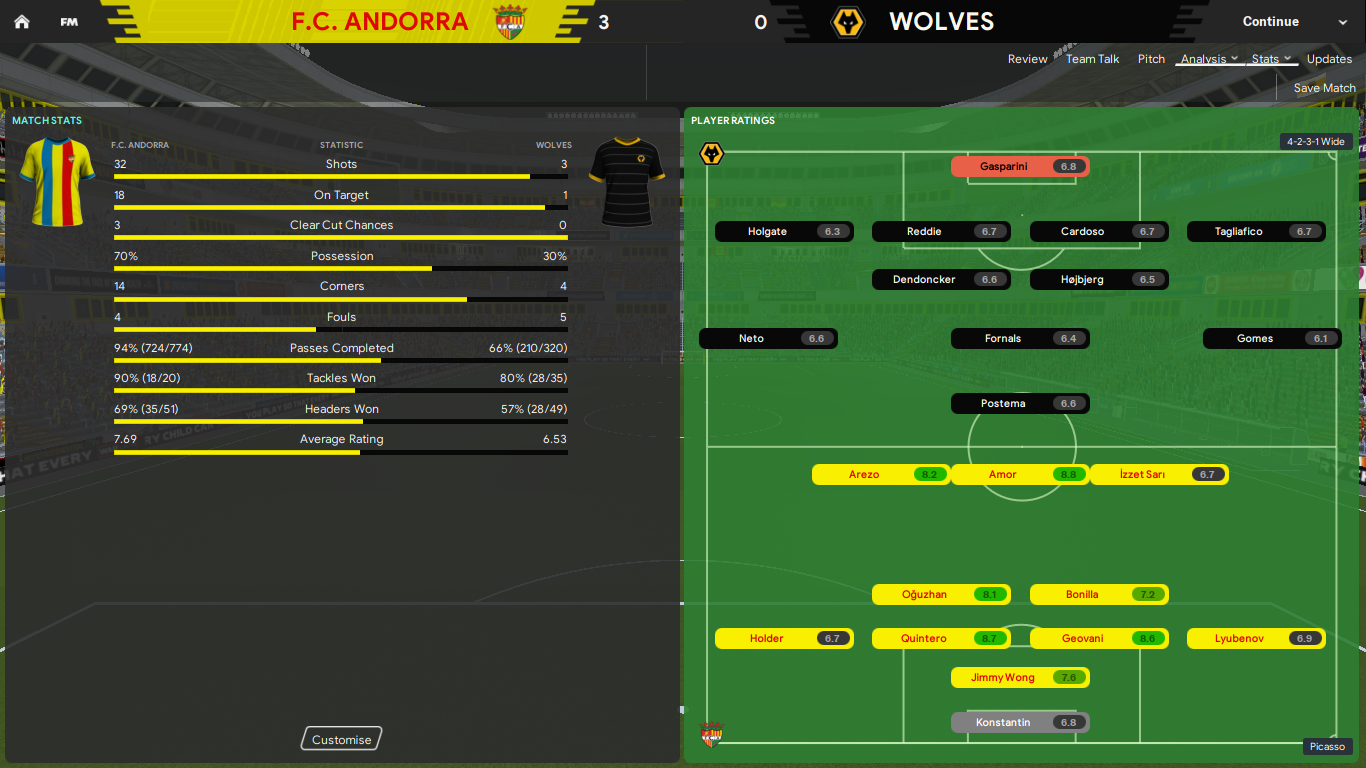 The results were fantastic, as you can the aim of dominating possession 61% over the season with almost 24,000 passes completed. Maintaining a goal threat was also achieved with a total of 112 goals scored over the season an average of 2.9 goals a game. Defensively the team was strong as well conceding 28 goals and only suffering 3 defeats (2 to Barcelona and 1 to Real Madrid).

As you can see from the match stats the tactic is working, with 724 passes (94% completed) showing the team is playing in a patient manner. Compare this to Wolves who recorded 210 passes (66% completed) showing how effective the teams pressing play is causing a 3rd of opposition passes to be turned over. 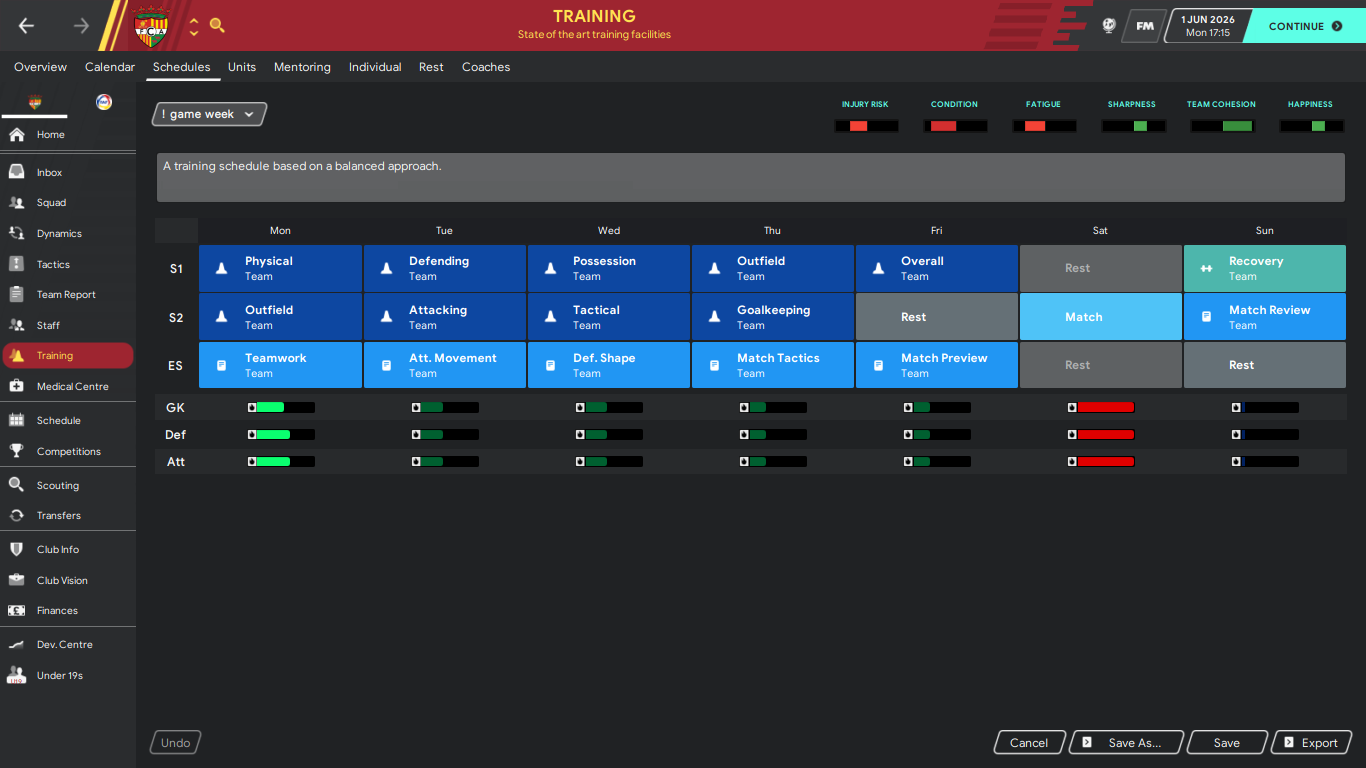 These are the schedules I used, both were simply the balanced preset with match practice used in the extra slots.

I cannot stress enough that you should ideally have a full preseason using the system before using it in competitive fixtures.