Download
Overview History Discussion
The tactic is named "The Crispy Cruiser" because when I look at the formation it looks like a cruise ship to me. That's it. No deeper meaning. Comment if you think different. 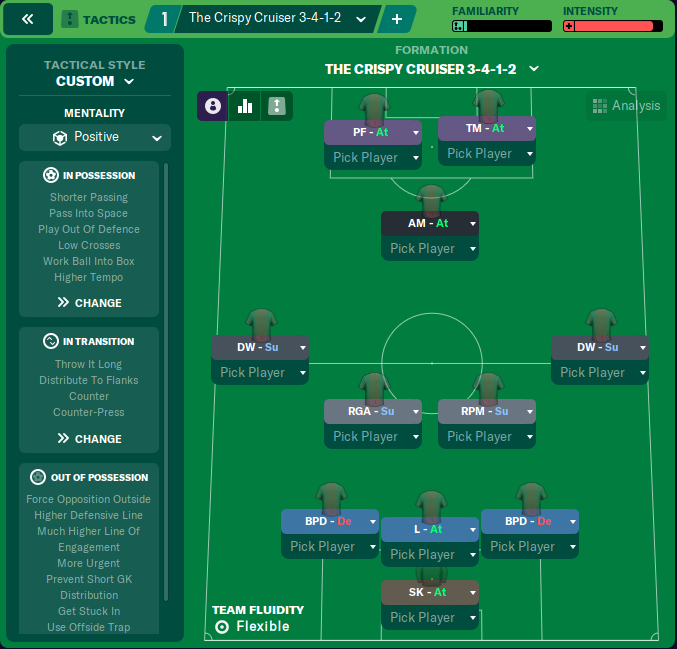 My inspiration making this tactic was to create a tactic that can be used with the first team you start your FM save and also with the team you end up with (winning the league every year, CL misery, the usual stuff). The main idea and the philosophy behind the tactic is that let's be real, you can't not concede in FM because of all the 0.01 xG v. 5.00 xG bs ect. That's why you have to adapt and just simply score more then your opposition. I got lucky and managed to find a tactic that not only scores loads of goals but also does not concede as often as expected.

Tactic will work with one tall guy TM and one short(er) guy PF upfront, adequate CAM, Wing-backs with good mentals as the DWs and your best/fastest CB as the libero. Also with the DMs you should have one guy who just runs as the RPM and the other guy who does the playmaking as the REG. If you are more interested in the player instructions, I recommend you download the tactic but basically I just have Tackle harder on the defensive players, Close down more on the two BPDs, Cross more often, Dribble more and Cross from byline on the DWs with the other one Holding position and the other Going forward (doesn't matter which way around), obviously Shoot less often on the BPDs and the DWs and finally Shoot more often on the TM. I personally like to take the DWs off around the 60th minute to make sure that I have enough coverage on the wings but I'm sure that it isn't necessary. Tested in the second season with fallen Ajax, that needed some assistance to get back on top of Eredivisie. Won the league and the new Uefa Conference league with ease only losing three games through the whole season. Got knocked out of the cup, because it was just one of those games (average team rating like 6.0, you know what I'm talking about. 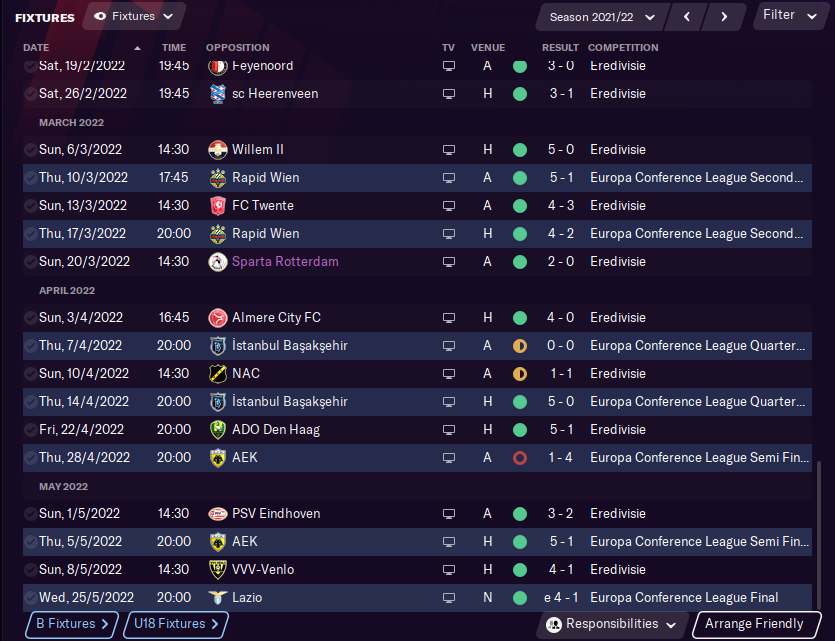 Also please don't presume that I got these results because of some mad second season transfer action. Ajax are a really good side, one of Europe's elite even. I mostly just tried to find similar players to the ones I already had, because I wanted to rotate my side and see how much difference do different players bring to the table. Here's my first/favoured eleven: 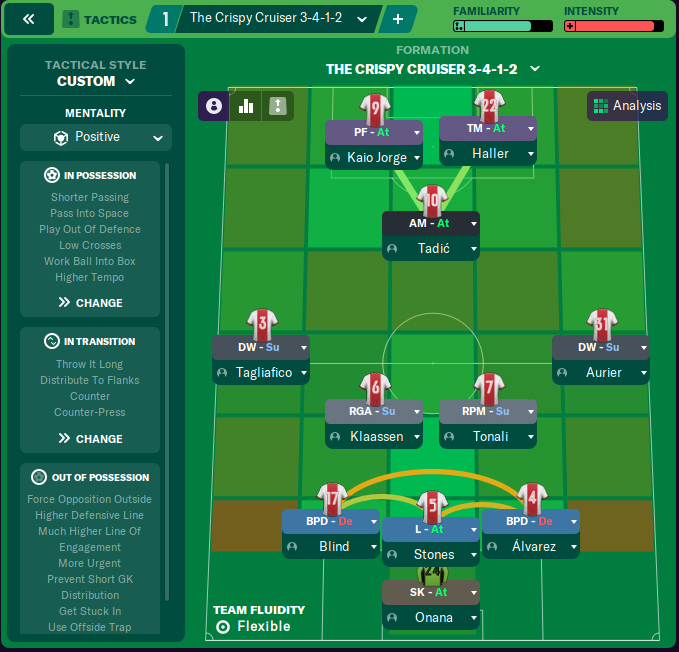 On my opinion, transfers are a part of squad building and the squad itself is always part of the tactic. Many people (like DoctorBenjyFM) don't care if they do the best tranfer deals ever. They still find a way to not win . You can take it as you wish, I just wanted to be honest with you.

I personally like to use training schedules made for Knapp tactics by RDF RDF Training Schedules & Development and set-pieces by Zealand Become A Set Piece God - YouTube but you can suit yourself really. The tactic scores over three goals per game, but isn't really reliant on set-piece goals.

I'm the sort of manager who doesn't really change things (that work) throughout the season so there isn't really any advice that I can give on tweaking the tactic against harder/easier opposition. The only time I do any changes is when A) I haven't scored a goal in the first 60 minutes or B) there's literally 15 minutes left to go and I'm losing. In both cases, I prefer to just high up the tempo or move to more direct passing. The main thing when changing things around is to remember that everything affects everything. You do a couple of tweaks to the tactic and the whole team dynamic has changed. That's probably why I, nor should you, panic when the opposition scores their first goal from their first shot of the game. You gotta read the game and see how you are having much more xG and chances then your opposition and just be patient. If you believe and don't rush into changes, the results will come (except in that one cup game that I had, I hated that cup game, had to close my laptop and have a day off of FM). 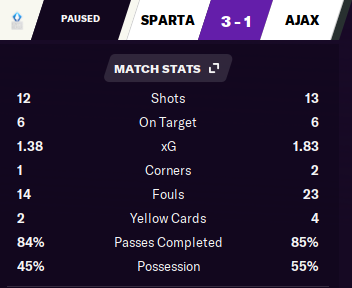 I hope you find my tactic and thoughts on managing helpful! Please ask me if you have anything in mind. (I also hope that this tactic gets tested so that I can see my progress as a tactics creator and possibly find ways to improve as a manager.)