Share with us the successes you have had on FM18.

My first Major success of this year was getting promotion with Dover. Considering we were also predicted 18th at the start of the season!

Won the league with Liverpool, but the biggest success? Everton getting relegated.
G

Might have been an easier run to the final, but to win it in the championship is absolutely brilliant.

Skin is coming along nicely -

make make a fm base themed one just for the site when i'm done... if i get bored over xmas
B

That looks sexy, wk. Hope you do release it.

Not a true success so far, but doing well enough with Lobos BUAP in Mexico that relegation looks unlikely has been my only success so far, as its the only save I've got any length into.
S

Getting Forest Green promoted to League One in my second season. We were expected to finish 11th

Just won the final match of the Aperatura 2-1, both goals coming from free kicks. Was surprised when i looked at individual stats afterward and saw my Segundo Volante completed 123 of 143 passes. And my central mid completed 149 of 173 passes. That's a new record for FM18 for me. That's without any PIs or TIs to impact passing, like Retain Possession or Shorter Passing.
G

Messing about with frames and info. some of the new panel/code changes have me ******* lost in xmls.

View attachment 77172
Might try and get the front & back of the kit into this panel as well if i can find space.
N

Not necessarily the biggest success in the world of FM, but I was quite happy with my first real stint in a save leading me to winning my first ever Serie C in Brazil... on away goals. Never won a league title on away goals before. 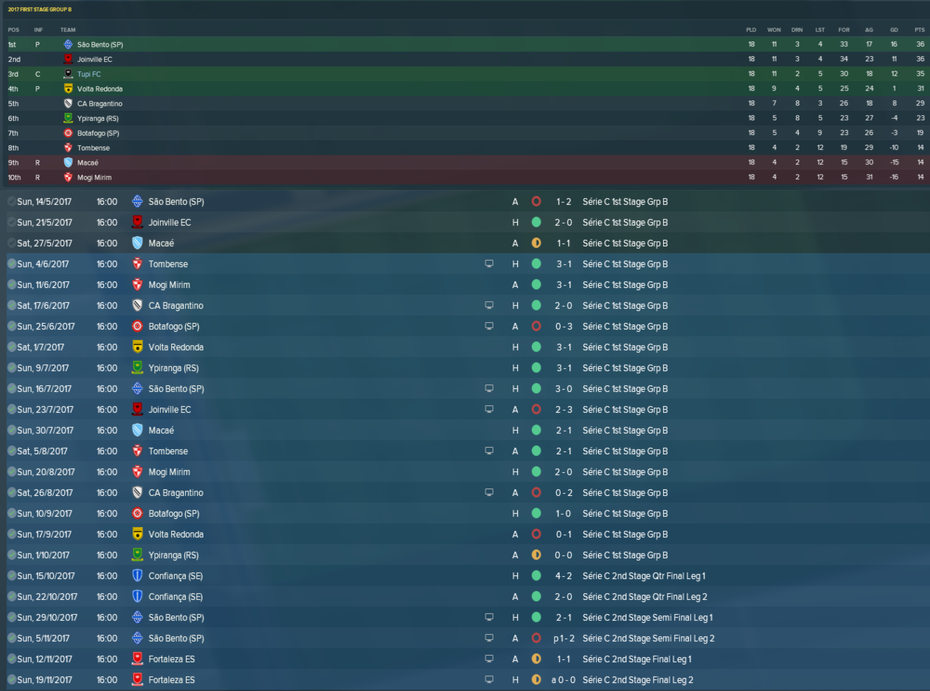 Games highlighted are the ones I was in charge for.
B Another screen done.... i really should start a save... but now to pull the tactics page apart... ergh!
T

Am sure this is a German 2nd round record

View attachment 75271Guess my success is this journeyman career so far.
Won the vysejsaja liha with Lokomotiv Gomel after 1 season of stabilizing them
Gained promotion to the Eredversie with RKC Waalwijk through the playoffs
Established RKC Waalwijk as a good Eredversie side, with 5th and 3rd place finishes in last two seasons
Won the KNVB Beker (duthc national cup) in 2024, and was runner up in 2023
Reached the first knockround of Europa League in 2023
Gained continental pro licence

May not seem massive, but it feels good to have started unemployed with no reputation or coaching badges, to end up fully qualified coach in charge of a club that I've built from the second tier, and probably in a position for a big job in top league soon.

I'd love to go to BATE back in Belarus, and dominate there Celtic style for a few years, if that isnt on I'd like to go to a top team in Italy, Portugal, or even here in Hollland, I'd move to Ajax, Feyenoord or PSV.

So I am in the depths of Romania and managed to keep cs balotesti ( a cash deprived ) team in the league. Thanks to my striker getting 35 goals !!https://www.youtube.com/channel/UCBOnEREpbt25BQYzn1QVKnw
A

Another screen done.... i really should start a save... but now to pull the tactics page apart... ergh!
Click to expand...

Any luck with the tactics page mate?

Average Joe said:
Any luck with the tactics page mate?
Click to expand...

Got it mostly how i want it, but not looked at creating a default one. try fmscout there are a few skins knocking about now...ive been trying to sort matchday into match of the day

See this to believe it