Premier League Champions for Lichfield City FC - QF in Champions League and won an FA Cup and Community Shield and 'finihsing in the top half of the Midland Football League Division One is the finest achievement to date' DA FUQ?! 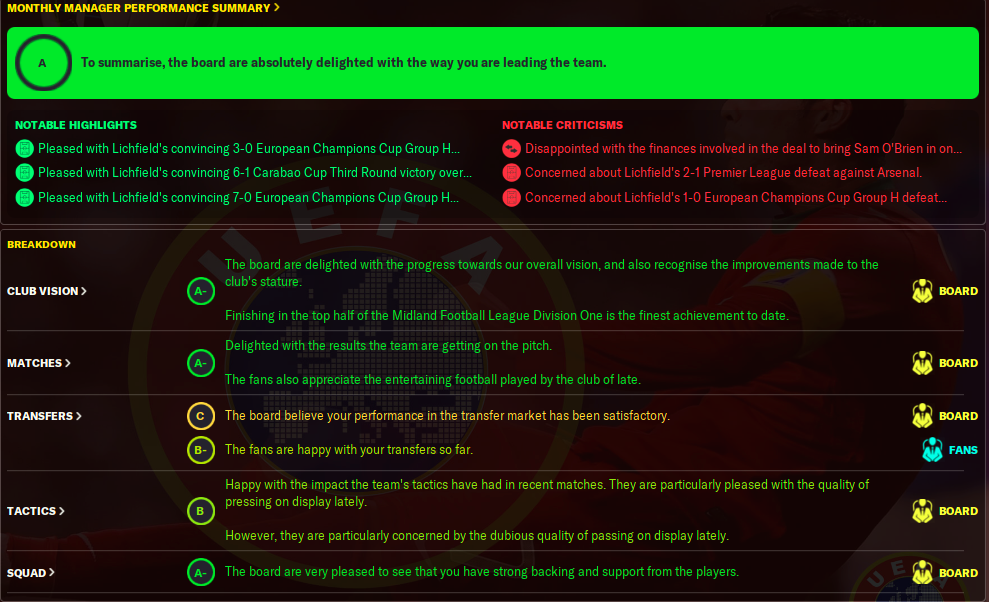 OutS|der said:
Bought the game because of the Ultimate legends database being added this year only to find out now it won't be. What a utter waste.
Click to expand...

This is "Football Manager", not FIFA or PES.
V

Turned on FM after 5 months and its still as bad as ever. Holy ****, SI really needs to get **** together on the next release which I'm boycotting because I've given them enough money just for transfer updates and needless interface tweaks.
M

I guess that's why they're a bigger team. 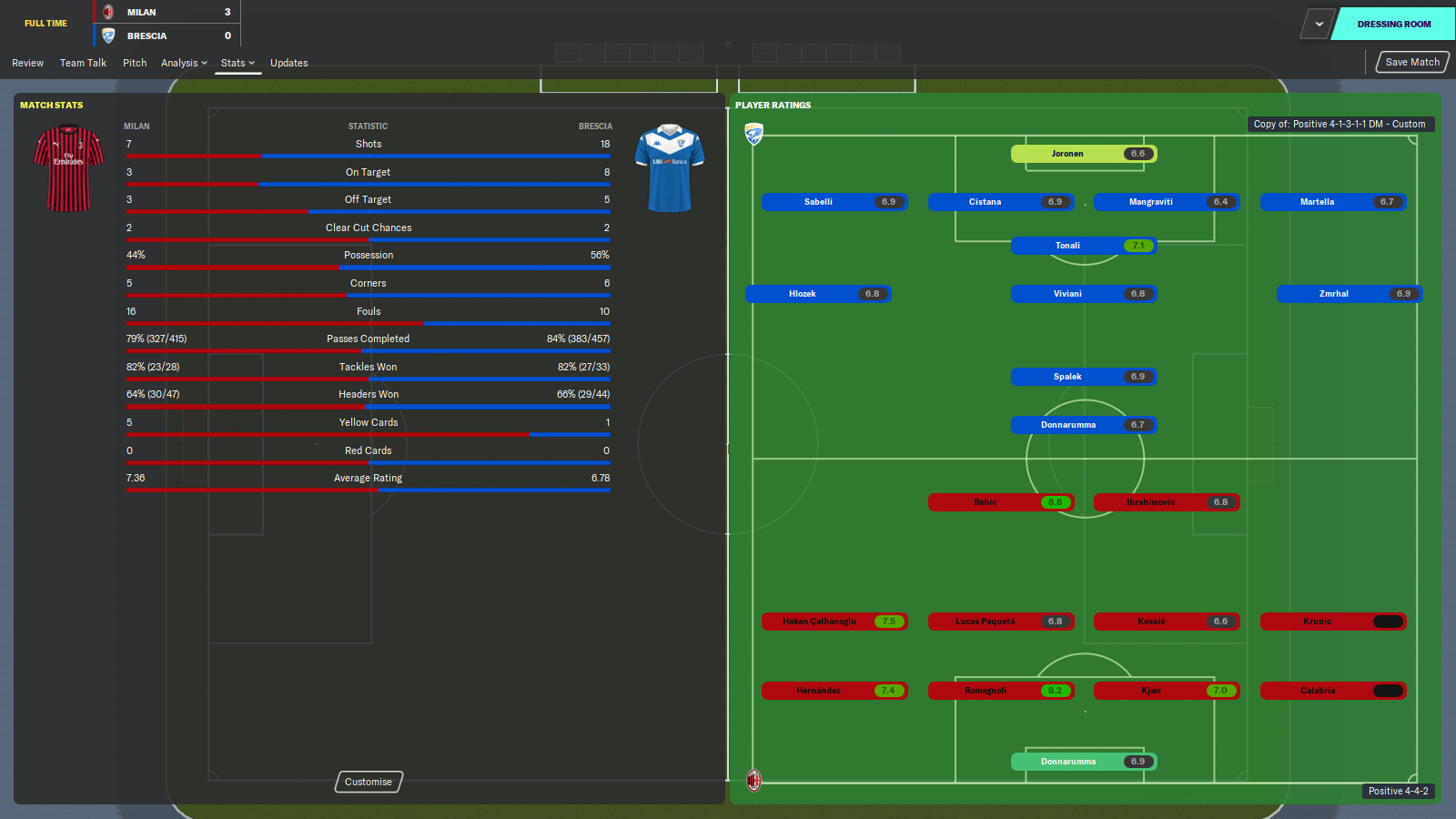 This is "Football Manager", not FIFA or PES.
Click to expand...

Hes on about FMChairmans database, custom made. Never gets released.
Reactions: crusho79
M

Won vs Inter and Juve, lost to Benevento, didn't even get FM's, they just demolished me. Sad days 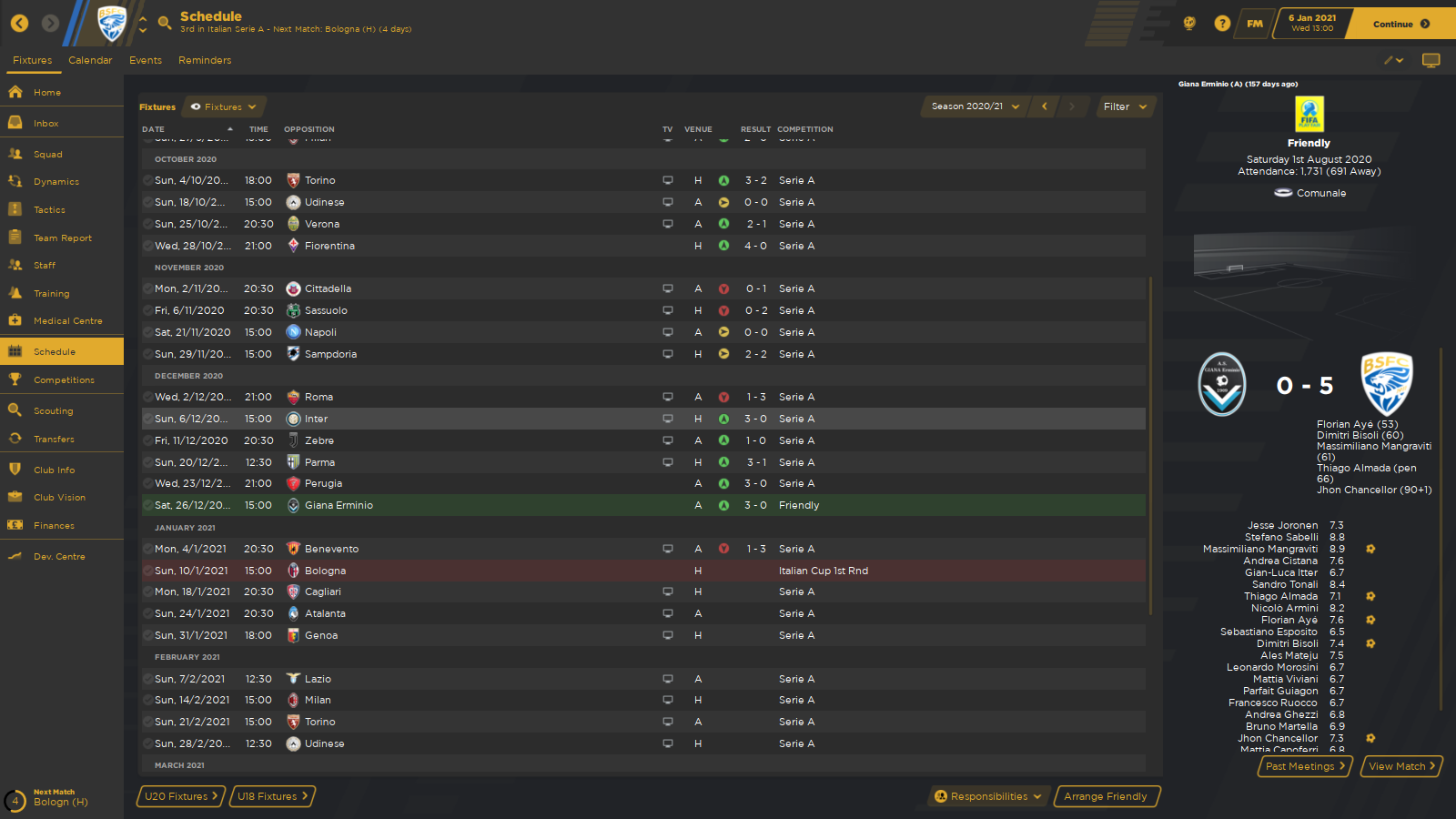 The amount of missed chances, penalties and overall dumb plays from players and worse of all, all keepers are superhumans.
Reactions: Swans
S

Anyone ever managed a successful Bayern Munich save , I mean not just results but the style of play as well ,possession , goals dominance , I tried most of the possession tactics on multiple saves and when it comes to that it must be something about the Bundesliga and all teams gegenpressing. I don’t expect 60% possession in all games but in my last game I had 39% possession away against Paderborn . It’s ridiculous, in real life Bayern with 9 players would do at least 45% ))

ssergio said:
Anyone ever managed a successful Bayern Munich save , I mean not just results but the style of play as well ,possession , goals dominance , I tried most of the possession tactics on multiple saves and when it comes to that it must be something about the Bundesliga and all teams gegenpressing. I don’t expect 60% possession in all games but in my last game I had 39% possession away against Paderborn . It’s ridiculous, in real life Bayern with 9 players would do at least 45% ))
Click to expand...

Have in mind that possession stats in Football Manager does not count like in real life.

this **** happens WAAAAY too frequently 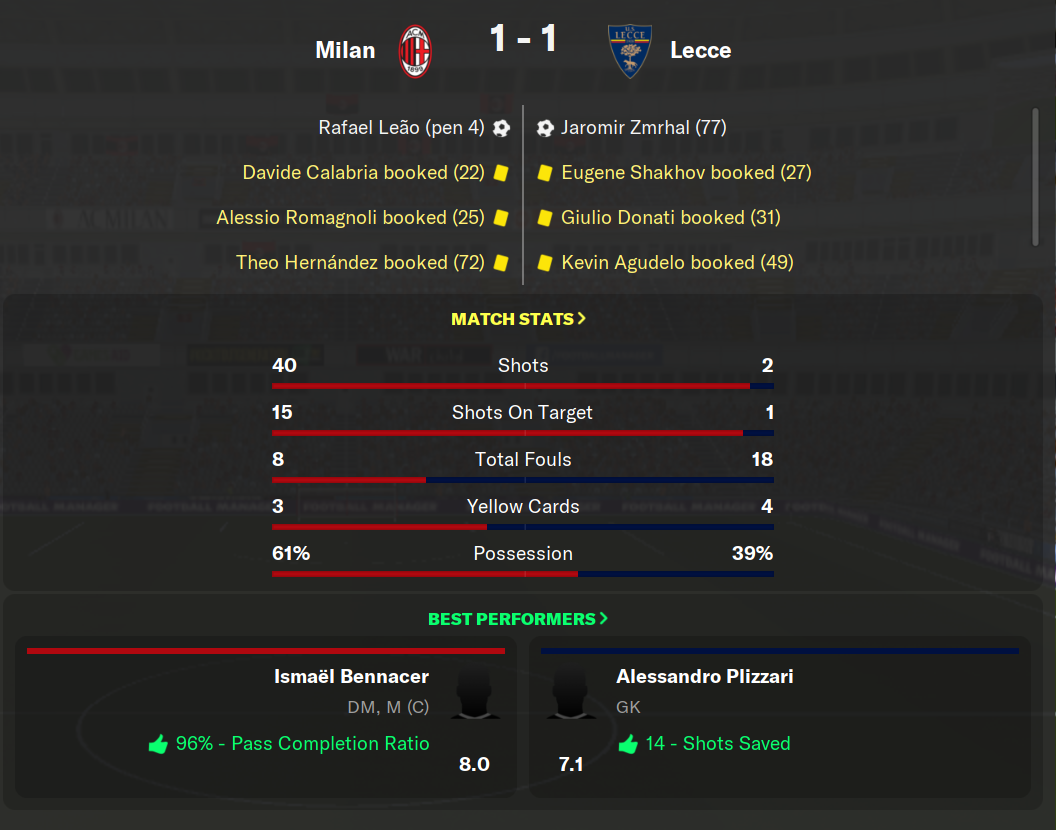 1) goalkeepers in this game are ridiculous. Jan Oblak on speed with the arms of Dhalsim from Street Fighter and the reflexes of an Agent from The Matrix. And this is Vanarama League goalies I'm referring to. I can understand a keeper playing a blinder every now and then but this happens so often it's beyond a joke. Gets a 6.7 post match rating for superhuman efforts when in reality he should be getting all the hero ***** the small town the club he plays for can offer and then some.

2) Wingers. Given the individual trait "Look for pass rather than shoot". Told in pre game briefing to cross as often as possible. Instructed in tactics to cross more and shoot less. WInger in question has good crossing, passing, composure and vision stats. Result:

3) Teams at the bottom of the table with supposeldly shot morale suddenly turn into Messi Clones FC and overturn the three goal deficit in the last ten minutes of the game. Also add moron keeper becomes Matrix Keeper in this duration.

Think I'll dust down my old Amiga and play SWOS before going near FM21.
D 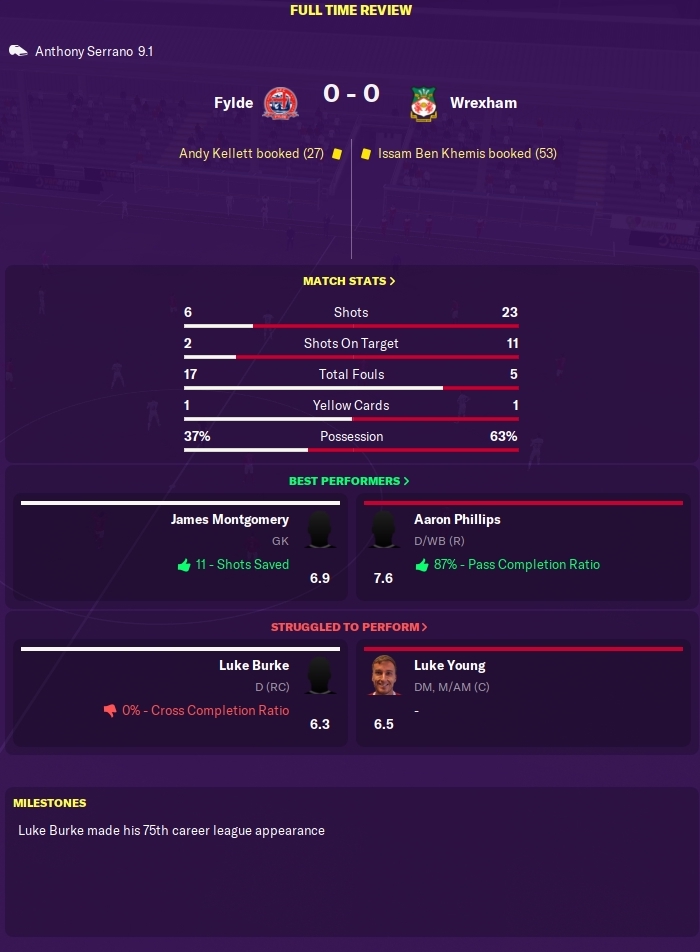 Yet another f**king Matrix Keeper singlehandedly keeping his team in the game. Most of those chances were decent chances so you'd expect at least one to go in. But in FM21 this is routine and nothing special.

Seriously, the keepers are the main reason I'll not be spending on FM21. They're so OP that a real life Jan Oblak would be worth 27p on the transfer market iwith an additional Twix bar (only one, not both) for his first 20 clean sheets made.

Picked this up last week while it was free on Epic. Haven't played since FM18, and started my "Mid-Life Crisis" story. Basically playing as actually me, a middle aged guy with only basic badges (national B), or high level playing experience to see how far I can go. Finally got a job at Limerick who had fallen to last in the Irish First Div. And had the task of saving them from finishing last.

Managed to just squeak by at 9th place because of a bad tackle in the last game of the season, playing down a man lost us the lead, the match, and the 3 points we needed to finish 7th. But they renewed my contract and told me I had to play within budget. I inherited a team spending the least in the league at 90k, on a budget of 45k. Then a terrific youth intake took my salary spend to 110k, but in the silver lining the chairman gave me a budget of 65k for my second year. So here was my plan, I'm going to win with kids. That's right, I'm only going to use my youth squad to be competitive, but I do need some leadership, so I'll keep my captain, so I re-sign him. Yet somehow, NOBODY LEFT MY PAYROLL!! So, I'm still spending twice my payroll and still less than all other teams in the league. As the pre-season is nearing closure, and no interest in anyone buying my club, or players. Guess I'm going to do well in the league this year, but def gonna get fired because I can't get my payroll down. Man, I hate this chairman.
D

The game where wingers can ACTUALLY CROSS A BALL (whereas 95% of all crosses get blocked in FM20 no matter what), the game where goalkeepers aren't horrendously OP. SI will no doubt say it's our tactics like they always do.

If 2021 is anything like 2020 Microsoft will make a fortune as Xbox pads will disintegrate due to these issues. Kids get salty enough on COD. Imagine the rage when this game arrives on consoles. THERE WILL BE CARNAGE.

Ten games in with a Vanarama Lincoln City (won 6, drawn 2 and lost 2) and actually ENJOYING it
V

**** this game, like seriously. I need 30 shots, 3 clear cut chances and 3 woodworks to score before I'm allowed to score a goal, while opponent scores 3 goals from 4 shots. **** this game.
M

Won two Champions cup in a row with RB Leipzig, after that took Liverpool and on the first year reached final of CL, but lost in the final to...RB Leipzig
R

So many things are awful in that game. And I don't need to test FM21 to know it's the same.

After a few years, there are twice less promising youngsters. Clubs ask for insane amounts of money (a player worth 40k, they'll ask 120M). Any 18-year-old wants a minimum of 200k/month. So it's a game meant to be played for years, yet it's broken after less than 10 seasons.
Players constantly want new contracts. Interactions are terrible.
You conceded 90th minute goals like it's nothing, every game is the same.
The game is scripted as ****. I had to load back my save and re-play the last week, the result in the league was the exact same, and the draw of the Champions League was the exact same.
I have a perfect academy, full youth recruitment and a perfect head of youth development (model citizen, 20 in youth coaching, 19 in potential and player evalution), yet the youth intakes are atrocious. What's the point of even trying to improve the facilities?! Once I tested it by re-loading constantly, out of over 50 tries, I got 2 decent ones and one golden generation. Treated myself by keeping the golden generation, and it was full of 2* potential players with horrible stats. Only one guy was good.