I know it won't be easy, especially since (as mentioned in other Scottish FM stories such as stonecold's latest Aberdeen story) Scottish football in FM get's harder and harder each time.


Why Hibs? Although I live 16 miles North of Aberdeen I got taken to my first game in which Hibs were playing Aberdeen at Pittodrie (ironically), and fell in love with them since there (big mistake). Supporting Hibs is probably similar to supporting Aberdeen, each season you have no idea if they are going to do good or bad.

I'm going to be using LFC Marshall's latest winter database with a few minor changes, these include Liam Craig being already moved to Hibs from St. Johnstone and adding Hibs training ground to Stadiums which has been made the Youth teams home.


Since it's my first FM story, I've decided to set a realistic goal for a Hibs team. My two main goals are: Qualify for the Europa League & do what Hibs haven't been able to do since 1902 (:'(); win the Scottish Cup

Set to Automatic experience with Hibs as my favourite club.
Not sure how I approach transfers since I have very limited budget.
I will be looking to bring youth players such as Handling, Stanton & Caldwell into the squad.


Next post I'll do a club info and tactic post. However I wish someone told me that writing this would be a b***h, cursor is going all over the place.


​
I know this looks like Klippybo's, but he's one of the best FM story writers so..... is there an easier way to write these? Nearly punched my laptop cause it kept putting colour in the wrong place, changing font etc.
D

Didn't have the best pre-season, lost most our games and only won two of them. Can argue that we had tough games, especially against Dortmund who we put in a good performance but lost 1-0, then got demolished by Stoke 6-0.


Wasn't optimistic about the start of the season after this, especially since most the club around me were doing business like nothing else and we couldn't get in anyone.


We only got one player in during the pre-season, goalkeeper Péter Gulácsi on loan from Liverpool after they became our parent club. Rated higher than our current no.1 Ben Williams. Had Kevin Thomson in on a trial but his wage demands were too high and he ultimately went back to Rangers in mid-august. Doubt I'll bring any more players in since most of the squad is fairly new, everyone bar Griffiths, Stevenson, Wotherspoon, Hanlon, McPake, Claros, Kujabi, Stanton, Handling, Doyle and Caldwell are set to make their debuts against Dundee United


David Gold, Dean Horribine and Bradley Donaldson all went out on loan. Planning on selling Pa Saikou Kujabi, don't rate him at all and he hasn't made a single appearance this season in real life.​
Last edited: Mar 3, 2013
D 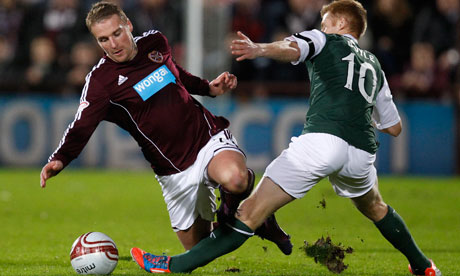 Excellent start with two wins out of four
Dundee United dismantled by my youth
Just edge past Arbroath
Cowdenbeath named as feeder club, going to see if I can get another Parent club

Dundee United 1 – 4 Hibernian
Craig, Stanton, Handling & Caldwell
Couldn't have asked for a better start, especially from the three youth players I promoted to first team. Was a little bit worried when United scored to make it 2-1, especially since it was Skacel that scored.

Nothing noteworthy about this game, only real highlight was Handling getting a second yellow card for diving in the box (Yes when I saw I shouted for a penalty).

Hibernian1 – 1 St. Johnstone
Griffiths
St.Johnstone took the lead early on with Gregory Tade and they generally looked the more likely to score again. Thankfully not long after the break Leigh Griffiths scored a poacher's goal to draw us level. End to end stuff after that but both keepers on form.

ScottishLeague Cup
Arbroath 1 – 2 Hibernian
Deegan, Doyle
Three D's off scoring tonight. Played mainly a youth team but Deegan and Doyle came on after Handling and Stanton were forced off injured. Was a wee bit worried when Doris made it 2-1 but we held out. Got Inverness CT in the next round


PLAYER OF THE MONTH

Péter Gulácsi
Great performances from the Liverpool loanee. Made two double saves in the game against Hearts & a triple save against St. Johnstone. Has a low command of area but so far has conceded only two goals. Although it did help that Hanlon and McPake also put in top performances, they weren't far behind.

Signed Ryan O'Leary from Kilmarnock for £45k on deadline day, only signed him cause I am really short of centre-backs and needed a back-up.

No other players left the club, due to Cowdenbeath already using up the maximum amount of domestic loans they are allowed to use. Kujabi is still here though I set him for release, hopefully if I make him unhappy enough I can get him to agree to a mutual termination.​
S

Good start there mate, if your doing monthly updates a screenshot of the league table at the end would be nice. How is Leigh Griffiths on this years FM? Had him a few times on previous games and he was always an absolute goal machine, especially in the SPL! Anyway... good luck with the rest of the season and make sure you beat Hearts next time you play them
D

I was going to do that but got bored in college one day and played on till the end of the season, so I'm just going back over the fixture list and over the notes I made.

Leigh is a good player, it says he's best played as a poacher but I found him unstoppable as an Advanced Forward. He went through fazes of scoring runs and droughts for me though.

Bad month with no wins in the league
Through to next round in Scottish League Cup
Kujabi is gone!


Kind of expected to lose to Celtic, they've been getting high scoring results all season so I was sort of happy to only lose by one


Disappointed to lose this game, especially since we were favourites to win.


Not really surprised this was the result, fielded a mainly youth and reserve side since we had them in the League Cup 3 days laters


Pleased with this result. Always have trouble against Caley but McGivern and Spoony secure the win


PLAYER OF THE MONTH


Didn't feel anyone merited the award this month, all our goals were lucky and our defending was really jammy​
D

Story abandoned after my computer had to be wiped due to a virus :'(

Will hopefully do a second version of this and include monthly league tables, transfers, sackings etc.