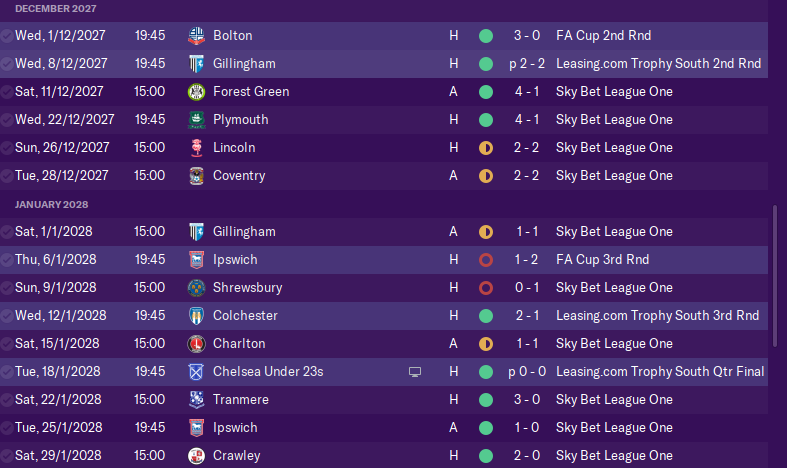 Overall, a pretty good festive period. December went very well and our only loss in the League comes courtesy of Shrewsbury, who at least are playoff contenders. We crash out of the FA Cup but still going strong in the Leasing Trophy, would be nice to add some silverware to the cabinet since I never won the FA Trophy. Just after I made that giant praising last post salivating over Smithson-Connelly, Jemar South-Thomas hit a four goal salvo against Forest Green - I wonder if on some level he knew?

Anyway, still six points (!) atop the League One table and going strong. The aforementioned Smithson-Connelly is out injured sadly, but it seems to be going okayish without him. Also you'll notice a new name in the top performers, we splashed £100k on Charlton's Audwin Willett who only had 6 months left on his contract but we were absolutely desperate for a right-back. 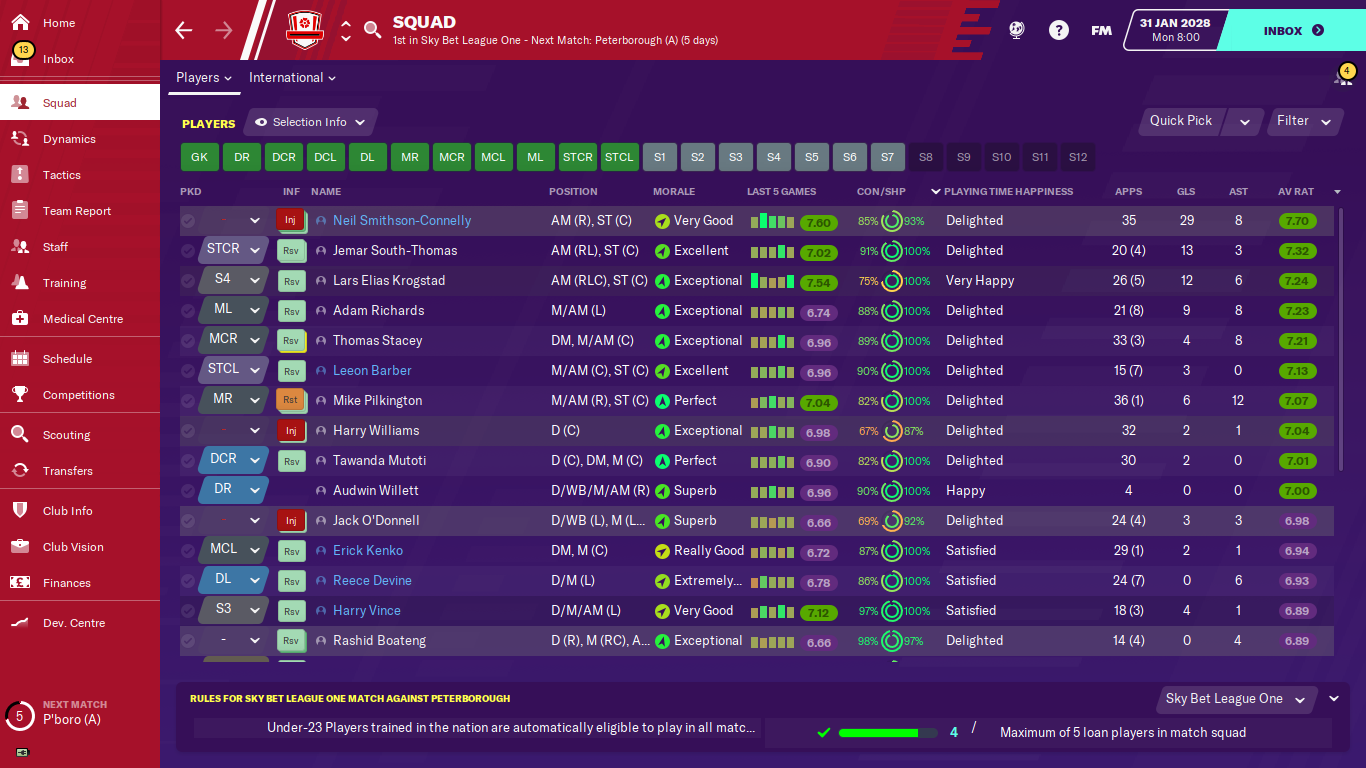 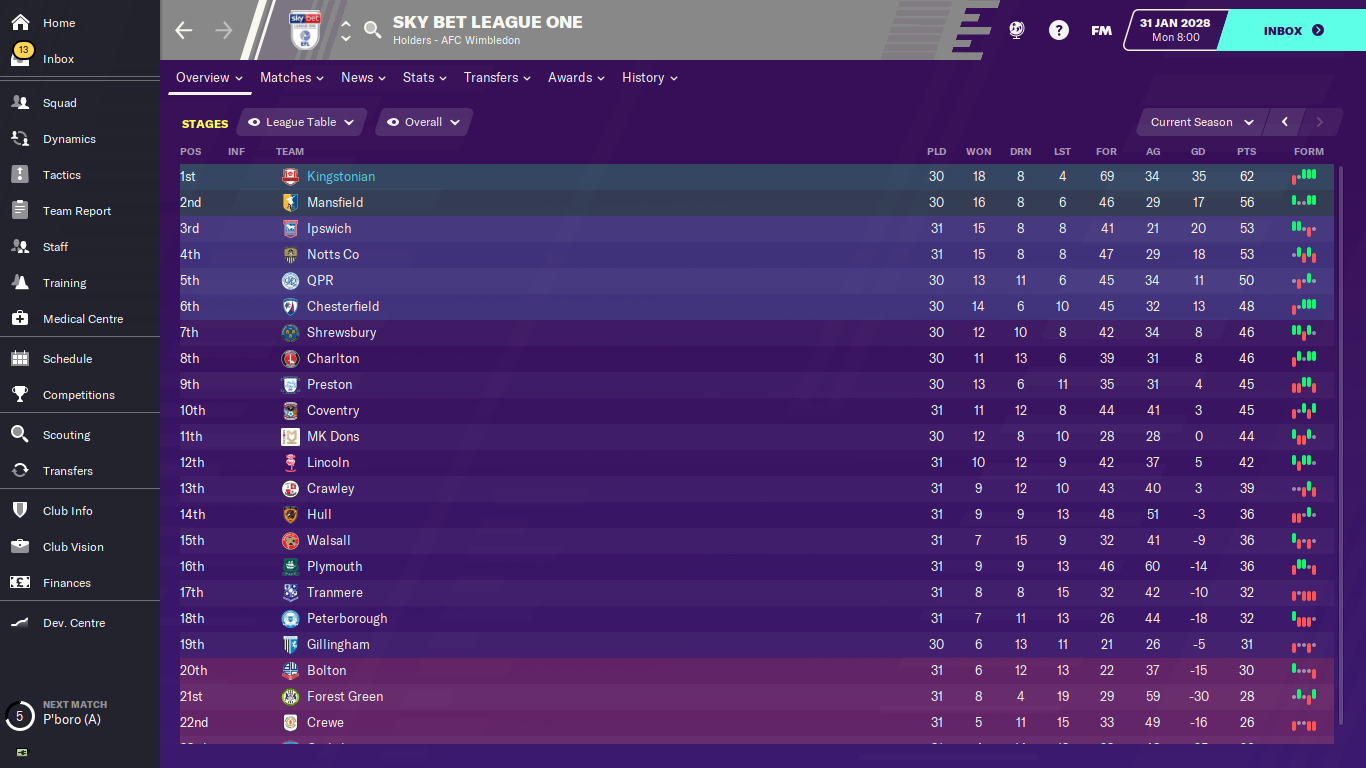 Ha! If they're not too old when I reach the Prem, maybe I'll try and sign Hudson-Odoi, Loftus-Cheek and Alexander-Arnold
O

Still all going extremely well, the only losses coming at the hands of second and third spot - not that it's done much good for them as the Super K's have gone soaring 9 and 11 points above them respectively. I still can't quite believe how easily League One football has come to us, our squad is barely League Two quality yet we're on the verge of automatic promotion. Sheer insanity. This'll be another Neil Smithson-Connelly worship post, but the record speaks for itself - 37 goals in 43 appearances. Sheffield United are letting his contract run out in the summer and inevitably he'll be bad in the Championship (if I manage to sign him) but for now, he's my favourite FM20 player. What a guy. Sadly we've lost Mike Pilkington to another broken leg (made of crisps) but we should have enough to cope for the rest of the campaign.

We've got a Wembley final in April to look forward to and unless everything falls apart completely, the end of a whistle-stop stay in League One. Championship here we come? Keep your eyes peeled and COME ON YOU K's! 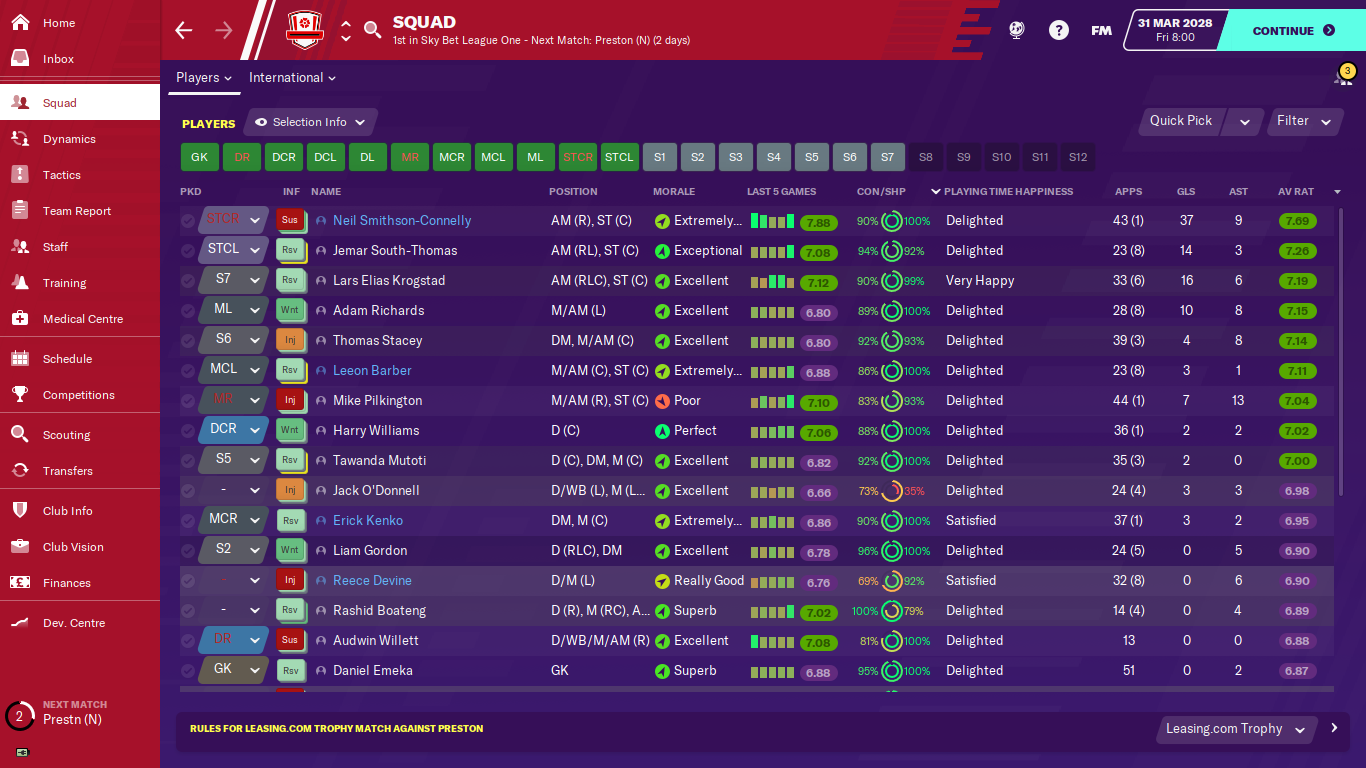 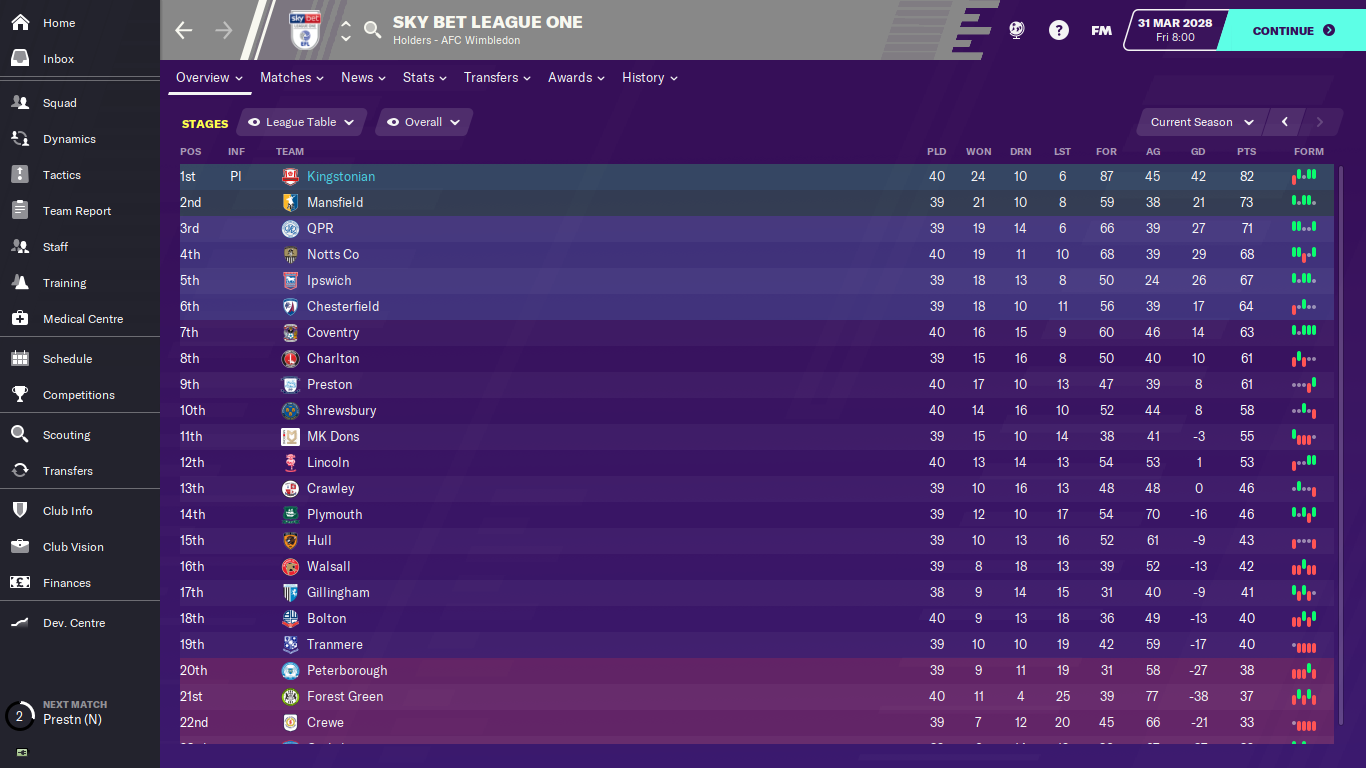 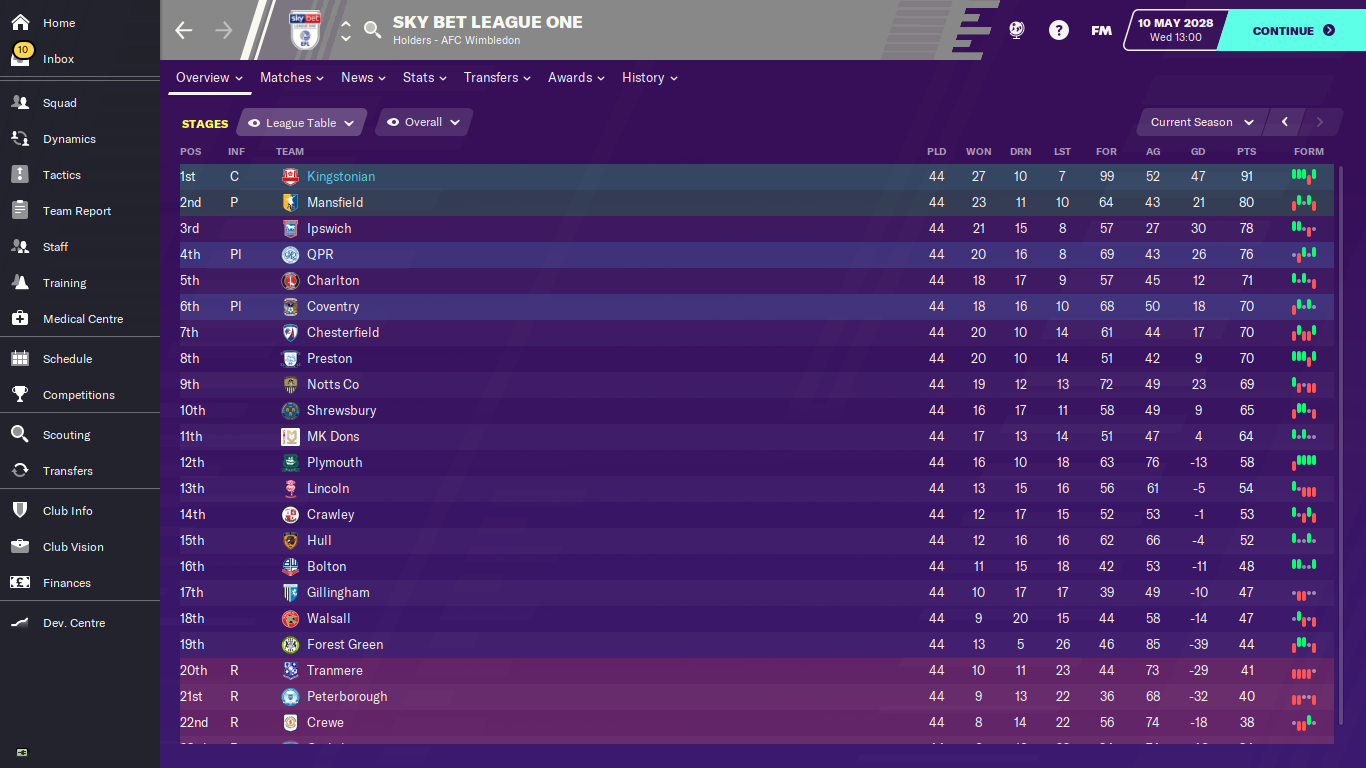 An absolutely phenomenal effort from the lads sees us secure the League One title, our third title in a row! Unbelievable!

A cracking last month including capping off the season with a thrashing of Forest Green Rovers sees us go up to the Championship, so close to the Premier League we can almost taste it all the way from the Isthmian Premier. Oh - and we win the Leasing Trophy as well! Double bubble! A phenomenal season, and while I'll concede it was a team effort (the League One team of the season being all Kingstonian bar the right-back paying testament to that), the man, the myth, the legend Neil Smithson-Connelly sweeps the end of season awards. Wins the fan's PotS by an absolute country mile, wins the divisional player of the season, wins manager Ollie Connors' heart for all time with 38 goals in 44 appearances - simply phenomenal. Talking of me, I celebrate my 40th year (god that's depressing to read, even in game) with a manager of the season award.

I start a new job tomorrow so these updates may get a bit fewer and further between, but still excited to play with the Super K's in the Championship. COME ON YOU SUPAAAH! HOOOOOPSAAAAAAHHHHH! 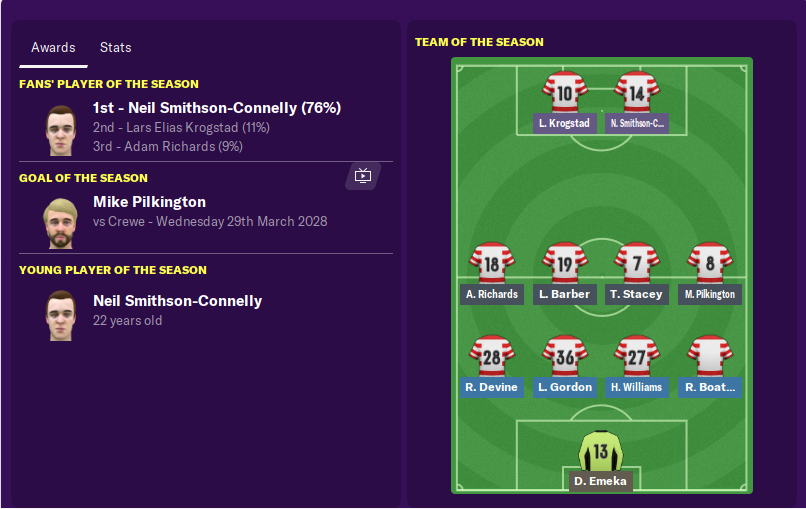 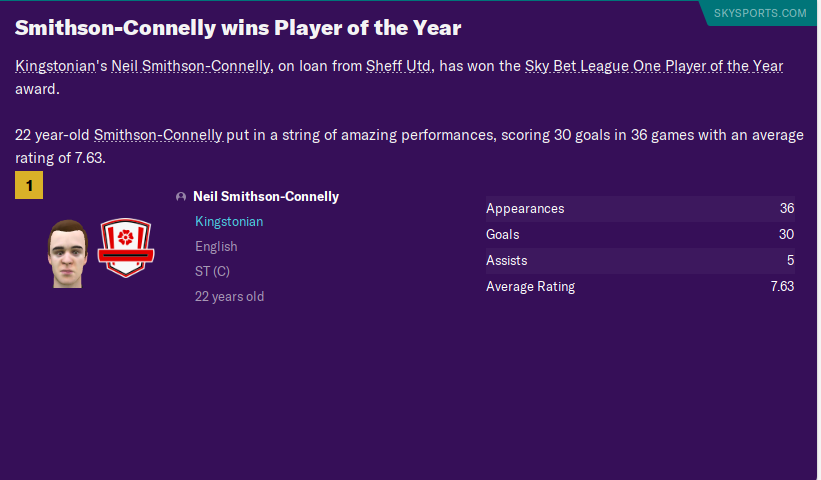 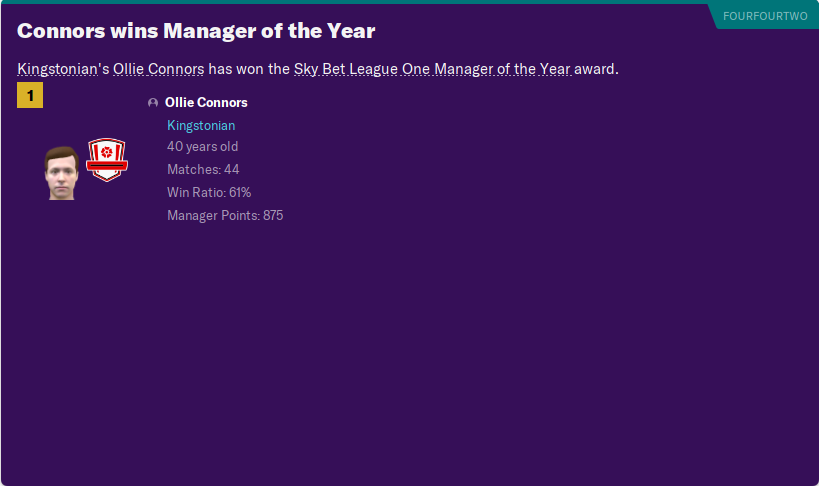