'The Partnerships Guide - Articles by tacticalterrier‎

You sir should write a book.
M

Fantastic reading, really is. Well thought out combos and you definitely sound like you know what you're talking about. The theory sounds excellent, but I'm curious about one thing, how do the combos translate into match ratings for the players? I'm going to guess that the FM engine will largely recognise your wingbacks endeavours as he bombs up and down covers large distances and probably gains assists, but what about the defensive winger? 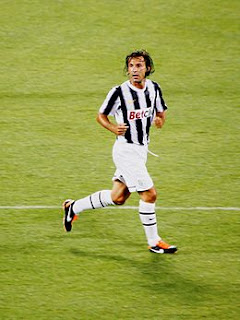 The playmaker is one of the most vital roles in every team, every successful team has one, and teams who don't will struggle greatly in goal scoring. There are two main types of playmaker, one is the deep-lying, holding regista (e.g. Pirlo pictured above) who plays long through balls from deep or keeps it simple to maintain possession. The other is a more attacking player in the form of an advanced playmaker who makes runs forward to support the attack and looks to receive the ball already in an attacking position, usually in between the lines of defence and midfield. The flaw in this however is that the opposition can simply play a player who's job is to mark the playmaker, effectively lessening his influence by stopping him from receiving passes.

A Combination to Fix the Problem

By playing both roles together, it not only gives your midfield double the amount of creativity, but it also means that the opposition would have to sacrifice 2 players to mark them, and since that is too big of a risk, they won't do it and therefore one playmaker will always be available. Even if they do choose to mark both players, that will mean that the rest of the team will find it easier to get into space so it's a lose-lose situation for them.

In my system, the advanced playmaker is more of a 'box to box playmaker'. He will look to get into attacking positions as often as possible, and make late runs into the box but when we lose possession, he quickly hurries back to the midfield to help out.

On the other hand the deep-lying playmaker stays deep and rarely, if ever, moves into attacking position. This allows him to dictate play and send through balls to the attackers ahead of him.

Because of how they're both set up, when defending the team creates a 4-3-3 formation, but when in possession of the ball, the box to box midfielder joins the attack to create a 4-2-3-1 system. When used well, the double-pivot can make your midfield movement dramatically better. A very simple strategy which only consists of the two midfielders switching positions regularly. Despite it being incredibly easy to implement, it is very difficult to play against. This is because the man marking will not work, as the opposition will be marking lets say Player A during one attack, but then he switches with Player B for the next attack, so the person marking Player A at first, now has to mark a different player so he won't get used to marking a specific playing throughout the whole game. Also, playing the box to box playmaker role uses a lot more energy than the regista, so neither player will get too tired as Player A can rest from the attack when he switches from the b2b playmaker to the regista and let Player B do the attacking.

+ It allows for a very creative midfield (since you can field two playmakers at the same time, there will be more than one outlet for defence-splitting passes)
+ You can dominate teams easily (for pretty much the same reason as the above advantage, plus most of the time there will be a playmaker available for a pass since they will struggle to mark both simultaneously)
+ It is difficult to stop (since if you do mark both playmakers, other players will be available to receive an easy pass, but if you don't they'll control the game)

- It is weak defensively (although this is countered slightly by the advanced playmaker being more of a box to box player, so he tracks back more. Playmakers aren't meant for defending, so you need to pair them with a good defending midfielder, which brings me on to my next point)
- The partnership requires a water-carrier (It needs someone to play the Makélélé role, to sit in front of the defence as the playmakers won't be able to do this effectively enough)

As requested, I have used Arsenal's Mikel Arteta and Aaron Ramsey for my example. Both are creative players and good attackers whilst still being reasonable at defending. 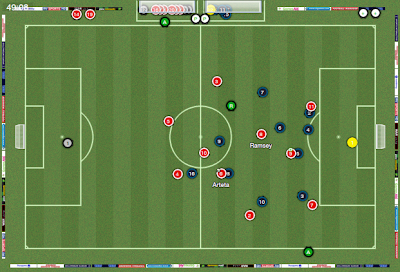 We start here with arteta just playing a pass to Alex Song (10) and he is closely marked, notice that Aaron Ramsey is not. This is because the opposition have to mark 2 playmakers, which as I've already said, is very difficult. This positioning from Ramsey will prove vital and it requires a good Off The Ball attribute (15) which means he can find space easily as well as a decent Anticipation (12) as he has realised that if he gets into a good position, he will receive a pass from a teammate. 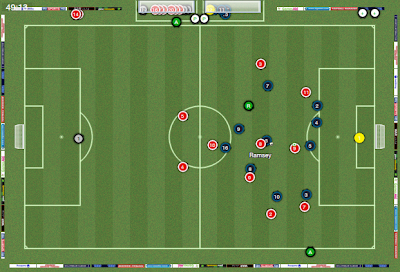 ​
Ramsey anticipates the play well and receives a pass from Song, he then cleverly drags the defender towards him by waiting which creates space for his teammate Van Persie, this uses a good Creativity (15). The Welshman then uses a great Agility (17) and First Touch (15) to quickly take it around the defender, finally giving the ball to the fantastic striker. 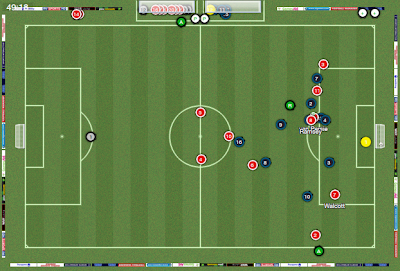 The Dutchman then does what he does best and swivels onto his favoured left foot before sending a shot into the far corner of the goal to make the score 4-1 with an assist for Ramsey. In the game Ramsey ended up performing better than his Spanish teammate making 3 key passes with an overall completion rate of 93.1%. Although Arteta did make more passes and with a higher success rate, 94.6%.

The Regista:
He has a defensive mentality so he drops deep to collect the ball from the defence. Run From Deep and Run With Ball set to rarely so he doesn't run into an attacking position. And through Balls on often so he makes long balls to the attackers often.

The Advanced/Box to Box Playmaker:
He is told to Roam From Position to find space, Run From Deep often to join the attack and Through Balls often so he can make defence-splitting passes. Also make sure that he is told to swap positions with the other CM (who will be the regista)


Thanks for reading guys, if you're enjoying these posts, please take a look at my blog at Football Tactics From A Terrier! and if you like that, feel free to follow me on Twitter https://twitter.com/#!/tacticalterrier Constructive criticism is always welcome and general feedback appreciated so I know what I'm doing well and more importantly, what I need to improve on!
O

Love the double pivot, am at a stage of my Morecambe save that I am a little bored, so have moved back to tactic creation. Double Pivot is going to be a key part of my creation.
K

Is this the Double Pivot, with the Cover/Stopped and Wingback/Defensive Winger combos.
O

khodder said:
Is this the Double Pivot, with the Cover/Stopped and Wingback/Defensive Winger combos.
Click to expand...

Who do you play as the defensive wingers for Arsenal?
F

Very helpful for someone new like me.good Job.
O

jordyboy2468 said:
Who do you play as the defensive wingers for Arsenal?
Click to expand...

in thr AML and AMR role because they have very decent marking and tackling. around the 10 Stat.
M

I'd say the only type of partnership your missing is some type of two up top combo, or a good working relationship between and AMC and a striker (I tend to find AMCs on this years version work appalingly compared to past versions - seen several people retrain Pastore to the wing purely because of this reason).
T

Yeah I am going to do combinations in attack, the playmaker one was requested so I did that first.
G

tacticalterrier said:
Yeah I am going to do combinations in attack, the playmaker one was requested so I did that first.
Click to expand...

I would play him as DLF - attack (which is what i played in the save) as he is more of an all-round striker compared to a trequartista as they tend to lack aspects such as strength and heading which 1) RVP has and 2) the DLF uses.

For the third question, yes it would work but you'd need your wingers, or another striker to make runs from deep to create chances. Although i'd suggest putting him on attack to utilise his finishing attributes more, especially if he's the only striker.
C

Thanks and include you tactical combos
D

This is a fantastic write up, top marks
D

tacticalterrier said:
Yeah I am going to do combinations in attack, the playmaker one was requested so I did that first.
Click to expand...

Love this thread, amazing read. What partnership are you going to do next?
T

Thanks guys! Um, I have been busy recently and I haven't had much time to do one but I'll try and get a post done soon, I was thinking Deep Lying Forward - Support/Poacher like Rooney and Chicharito at Man Utd but if you want something more unusual, I'd be happy to do a suggestion instead!
A