Okay, so I've have worked for quite a while on this Libero tactic. At one point it incorporated a Wide Target Man and a Regista, but i ended up with this hybrid version of a 343 tactic. It just plays so well with quick passing and a lot beautiful build up play. I often use a Libero in my tactics and this is no different. He's the holding midfielder in attack and the rock in defense. When the role fits the system he's the perfect player to have in your team. Retrain a ball playing defender or a versatile defensive midfielder. So how do we line up?
View attachment 105388

It all starts with the sweeper keeper (AT). Think Neuer or your very own league two keeper He's set to distribute to the Libero to start the build up from here. Important attributes are one on ones(yes sometimes the Libero gets caught upfield), reflexes and passing. Commanding the area is great too...

Libero(AT) He's set to pres more, so that he can break the line of defense while the other two CBs cover for him. He dictates play from deep and stops alot of counter attacks. Key attributes are Heading, passing, tackling, positioning, anticipation and off the ball as well as vision. Good PPMs are gets forward whenever possible. Switches ball to opposite flank, tries killerball often, stays on feet in tackles, plays out of trouble - if your Libero can dribble then have him train runs with ball through the middle.

Central Defender(ST) - Here you have your right footed defender who's good in the air and rather fast. PPMs Stays back at all time, marks opponent tight

Left wingback (SU) The most defensive of the two wingbacks...a great PPM is tries one two

Right Wingback (AT) He's vital. Gets a fair amount of assists, because the offensive midfielder links up very nice with this player. PPMs Gets forward whenever possible. Cuts inside from right flank is surprisingly good for this role.

OFF MID - Your "shadowstriker". Have an allround attacking midfielder play here. Doesnt have to be fast or a great dribbler. Dont know about PPMs here...keep it simple. Dont have him train any runs with ball, as I think it will kill the flow of the offense, but I could be wrong

Poacher. Needs off the ball, pace/acceleration, finishing and thats kinda it. Moves into channels is a good PPM.

Please note that crosses are set to low crosses...so you need small fast kind of strikers, but you can try with bigger strikers and change to mixed or high crosses.
We play FAST POSSESION football through the middle.

Please observe the game. If you're holding onto a lead please hit defensive or contain or simply create a time wasting version of the tactic. If you're an underdog team you might want to play around with the mentality. Maybe defensive or counter could work, but haven't tested it.

I dont have inputs on training. Either train the roles or have your ***.manager taking care of business. Offensive movements might be the best going into games, but if youre struggling defensively maybe change to def.pos or team cohesion: I just let my *** manager handle this as well. Seems to work just as fine, but I could be wrong.

How Your results in Copa del Rey and Champions League in holiday?
J

Interesting, always nice to see something a bit different.
M

TylerD21 said:
How Your results in Copa del Rey and Champions League in holiday?
Click to expand...

Didnt save the test game but i remember Real Madrid making it to the champions league final. Cant remember if they won it. They won the copa del rey.
C

post your line up in each position please
M

?? I play a danish team so you probably wont know any of the players
C

Martino said:
?? I play a danish team so you probably wont know any of the players
Click to expand...

Why don't you post your long term save team pics?
R

Defo like the look of the formation, exciting and something new.
Giving this a shot on my new Dortmund career, will keep updates as I get along.
M

I've only just started using this final version of the tactic as I have been using this long term save to create a great Libero tactic. Took forever to make the Libero get good ratings as long as playing a beautiful build up game as long as winning.
And I only use homegrown players in this save, though I had to buy one defender to cover a big hole in my team
M

Any suggestions on a good libero??
J

Messiah76 said:
Any suggestions on a good libero??
Click to expand...

You will need to retrain players with the right stats
R

jethers said:
You will need to retrain players with the right stats
Click to expand...

Marc Bartra at Dortmund looks like a decent one, Ball playing defender which is decent as Libero already.
M

Recklessnessz said:
Marc Bartra at Dortmund looks like a decent one, Ball playing defender which is decent as Libero already.
Click to expand...

Bonucci and Vertonghen comes to mind when thinking of the big clubs. Am sure that Andreas Christensen froM BMG/Chelsea can be a perfect libero as well. Kinda depends on which type of libero you want, as you can try a small ball playing regista type as well, if you're a strong team offensively.
Z

I noticed the logo quite weird in OP post...is it default logo by FM?
M

View attachment 105206
Sometimes when I face a strong narrow 41212 I tend to have my right central midfielder to man mark the opponents offensive mid, cause he tend to have too much room. Against weaker sides this is not really a problem, but in a close game it can be decisive. Another little tweak if you're losing is to change left wingback from support to attack, but it leaves your backline more vulnarable.
M

Managed to win the league eventhough I only played with this tactic for the last half of season, as I spent first half of the season developing it. Have in mind that I only used homegrown players and starting alot of youngster age 17-20 and lost our best striker in the winter window. Our squad age was 22. Now i hope i can keep my best players for next season. Maybe the offensive midfielder can perform better or I just havent found the right player, but overall I'm satisfied.

Please ignore the attached thumbnail. That was a wrong screenshot.
Last edited: Feb 15, 2017

I've been playing a 5-3-2 with a sweeper as is so I gave this a run mid-season in a friendly and in a Derby because why not and... Dominated, won 3-0. The libero ended up the PoM with an 8.4 rating, a goal and 14 interceptions. 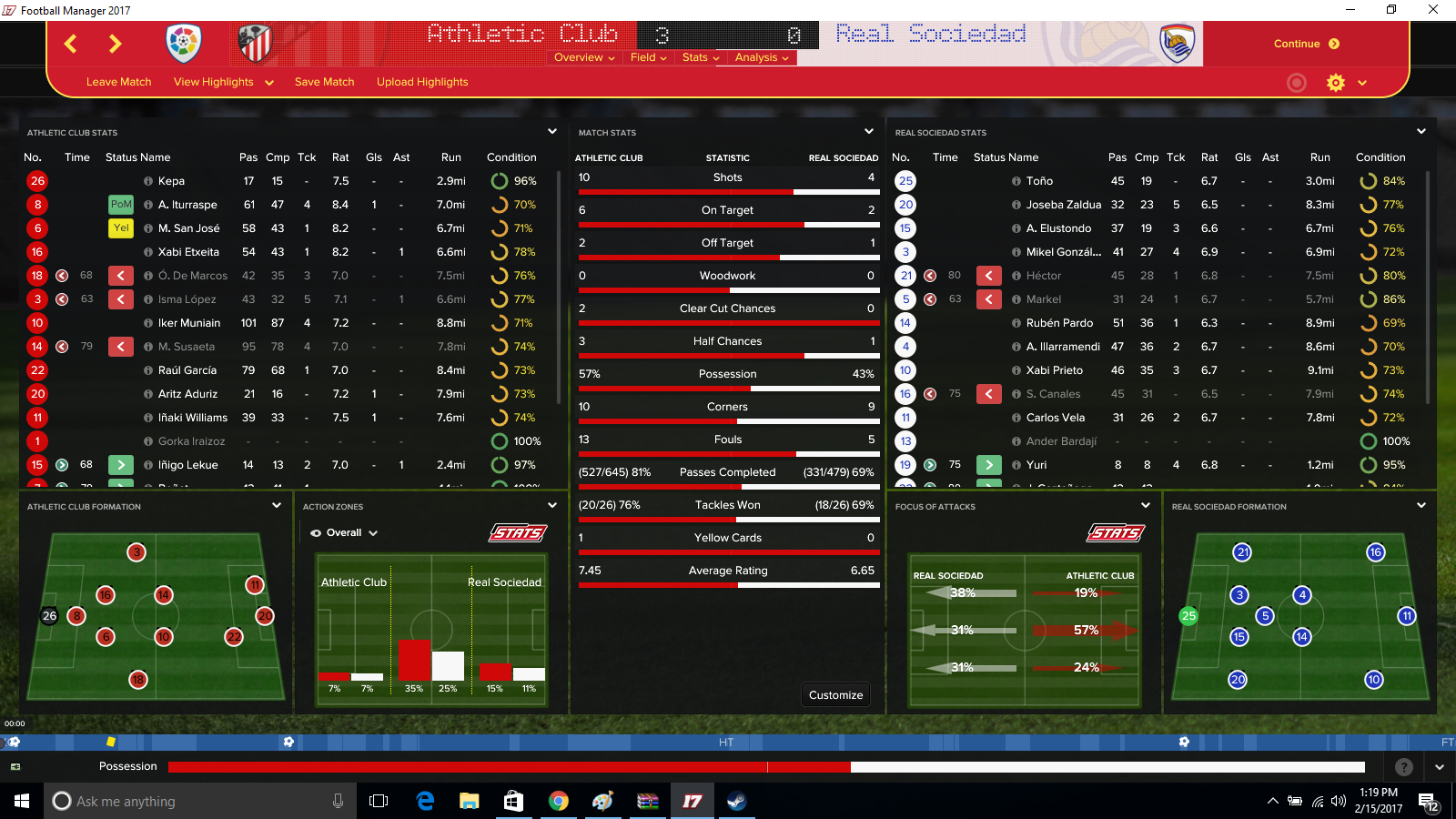 I also swapped him to support once I had the 3-0 lead to be a little less aggressive and his rating actually went up.

will try with atalanta daje!!
M

Ghents said:
I've been playing a 5-3-2 with a sweeper as is so I gave this a run mid-season in a friendly and in a Derby because why not and... Dominated, won 3-0. The libero ended up the PoM with an 8.4 rating, a goal and 14 interceptions.

I also swapped him to support once I had the 3-0 lead to be a little less aggressive and his rating actually went up.

Nice with the defensive tweak. Sometimes if I struggle offensively, I change the attacking midfielder to a trequartista to get some more flair and unpredictable movements into the offense. If the tactic overall will perform better with this tweak I simple havent got time to test. It's alså possible to change left wingback to an inverted wingback from time to time to change the build up a little bit. Or simply put a right footed wingback as left wingback. Small tweaks that sometimes gives you an upper hand.
Hope the results continue to be fine.
You must log in or register to reply here.
Share:
Facebook Twitter Reddit Pinterest Tumblr WhatsApp Email Link
Top