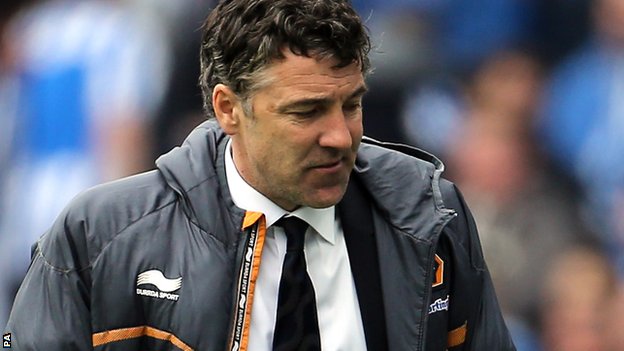 7 May 2013Last updated at 09:52
Wolves: Dean Saunders sacked after relegation to League One
Wolverhampton Wanderers have sacked manager Dean Saunders after the club's relegation to League One.
Saunders left Doncaster Rovers and took over at Molineux in January, but the West Midlands club have suffered consecutive relegations after losing their Premier League status in 2012.
The Welshman, 48, was in charge for 20 games, having taken over when they were 18th in the Championship.
Doncaster, meanwhile, were promoted to the Championship under Brian Flynn.
Wolves are now looking for their fourth manager since sacking Mick McCarthy in February 2012.
Immediately after his dismissal the club came close to appointing Steve Bruce, who has just led Hull to the Premier League . He had a second interview in March 2012 and thought he had got the job before the club had a late change of mind.
McCarthy's assistant Terry Connor ended up being in charge for a four-month spell as Wolves slipped out of the top flight. Norwegian Stale Solbakken was appointed in the summer, before being sacked in January.
Saunders, who was also relegated from the Championship in the previous season with Doncaster, was then given the job on a rolling one-year contract. He won five, drew five and lost 10 of his 20 matches in charge at Wolves. It took 10 matches to earn his first win as boss.
The club lost their Championship status on a dramatic final day last Saturday after being beaten 2-0 by Brighton.
A club statement said: "Manager Dean Saunders has been informed by Wolves that his contract is to be terminated. Assistant manager Brian Carey will also be leaving the club.
“He is the sacrificial lamb in my opinion. Twenty points from 20 games, is that really enough time for a manager to be able to do it at a great old club? I think there is a bit of a kneejerk reaction here by the chairman Steve Morgan, and not for the first time”
​

​
"Wolves have now begun a recruitment process, which in conjunction with the board will be managed by head of football development and recruitment Kevin Thelwell.
"The club will now take as long as is necessary to make this crucial appointment and there will be no publicly communicated timescales."
Wolves have become the first team since Swindon in 1995 to suffer back-to-back relegations from the top flight.
Only 12 teams have ever been relegated to the third tier in successive seasons in the 125-year history of the Football League, but Wolves are the first team to manage the feat twice.
The statement continued: "Wolves would like to thank Dean and Brian for their efforts in what has been a very difficult period for everyone, and wish them both the very best for the future.
Wolves' league record since Mick McCarthy's sacking

​
"The club will be making no further comment at this stage."
Speaking on Saturday, when asked if he had the backing of the club following relegation, Saunders replied: "I'm not certain about that. I've got a contract having been here three-and-a-half months.
"As soon as that final whistle went I am now starting to rebuild the football club because we have to move forward now."
Wolves chairman Steve Morgan added in a statement on Saturday: "Clearly a lot of mistakes have been made over the past two seasons and I understand fans' pain, anger and resentment towards me."
Former Wrexham boss Saunders said on his Wolves appointment : "My brief is the Premier League. Although we're right up against it, three or four wins on the trot and we'd be right up there."
The former striker won 75 caps for Wales scoring 22 goals during a playing career that saw him turn out for 12 clubs, including Liverpool, Aston Villa and Galatasaray, before retiring in 2001.

David Moyes has taken his first steps towards imposing his authority as Manchester United manager by dispensing with the services of assistant manager Mike Phelan and goalkeeper coach Eric Steele.

Making way: goalkeeping coach Eric Steele and assistant manager Mike Phelan are to leave Manchester United
While Phelan’s exit had been anticipated, the end of Steele’s time at United has come as a surprise, with his work with De Gea being credited as crucial to the youngster’s improvement in recent months.
Both Phelan and Steele had been involved in planning for the pre-season tour of the Far East and Australia, but with Moyes keen to reshape his staff, the two men have been told their future lies away from Old Trafford. Rene Meulensteen,
a respected member of the Old-Trafford setup has also been released by Moyes. Meulensteen has since become the odds-on favourites for both the
Wigan Athletic and Wolverhampton Wanderers job.

Rene Meulensteen has been appointed Wolves manager on a one-year contract. Meulensteen was a part of the Manchester United setup for a total of ten years in two five year spells. Meulensteen joined United in 2001 as a youth coach and in 2005 began to work with the reserves at the same time. In 2006, Meulensteen joined Danish club Brondby as manager but left in 2007 citing a different views on the club's future. 13 days after leaving Brondby, he joined United as a technical coach. After Carlos Queiroz swapped the no.2 role at United for the manager's role at Portugal, Mike Phelan was promoted to assistant manager and Meulensteen took Phelan's role of first-team coach. Phelan, Meulensteen and goalkeeping coach Eric Steele were sacked as part of the revamp at Manchester United under David Moyes. Meulensteen was interviewed for Wolves on the 28th of May 2013 and signed a deal on the 29th. Meulensteen had this to say at his press conference.
"Wolverhampton Wanderers is a very big club. It has suffered two relegations in a row but I believe with the backing of the board and the fact that all the Manchester United coaches who were removed from their posts have joined me so the adaptation period will be very quick. Myself and the owners of the club have the same ambition and I have recieved a very significant financial backing from the board. I aim to gain promotion from League One and win the title. My work with Wolves will hopefully be a long and successful project."

Chairman Mode - I will be playing as the chairman in this game. I will observe Meulensteen and if the club do poorly then he will be removed from post. I have FMRTE that's why it's possible.
CHAIRMAN:
Michael Osman - Eccentric English billionaire who struck oil in the Caspian Sea. Osman now has over £20 billion pounds and purchased Wolverhampton Wanderers for £100 million. I will now talk as Michael Osman
"I have set Rene Meulensteen a transfer budget of 160 million pounds as I want to win League One with a record points haul. I have terminated the contracts of all staff and I have terminated the contracts of every player at the club. Meulensteen will have his own squad so I expect him to do well. Every month I will post my opinion on how he is doing but in not too much detail or the media will get a good story at my expense."
TRANSFER BUDGET: 160 MILLION
WAGE BUDGET: 300 THOUSAND
SEASON EXPECTATIONS: WIN LEAGUE ONE
Last edited: May 30, 2013
S

September
"We have had a productive start but a poor second month can ruin the first." - Rene Meulensteen to WolvesNewsView attachment 349101
View attachment 349100
Rene is really living up to the manager's role. I'm proud of him. However, we lost a game this month. But it's one game. And on the brightside. WE BEAT A PREMIER LEAGUE TEAM!!! Yes, in the Capital One Cup we knocked out Premier League team Southampton!

NPOWER LEAGUE ONE
Bradford 0-2 Wolves - Get in! I own Wolves and support the Gunners so this win is dedicated to them.
John Carew (8), Nile Ranger (77)


Wolves 1-2 Peterborough - We had the lead and we blew it. They are a relegated team from last season and there level on points with us but we have a game in hand. There a tough opposition but we better win at London Road.
John Carew (7) - PETERBOROUGH - Tyrone Barnett (13,48)

October
"We eliminated a Premier League team from the Capital One Cup. If we can beat them, we can beat anybody." - Rene Meulensteen to WolvesNews
Unfortunately, Darren Ferguson stole the October Manager of the Month award from Rene's grasp but this month was once again, Rene Meulensteen's. Let's take a look at the month of October.

Walsall 0-4 Wolves - We beat our biggest League One rivals Walsall. Excellent work Rene! On the negative side, they were 10 men down from the 47th minute onwards so we had an advantage. But we worked it in our favour!
Robson-Kanu (10), Ranger (37), Davis (51), Webber (89)
- INJURY NEWS. Akos Buzsaky ruled out for two months after tearing hamstring in game.

CAPITAL ONE CUP THIRD ROUND
Fulham 2-1 Wolves
Webber (31)
Two quickfire goals from Jay Bothroyd were too much for Wolves to take but I'm proud of the team.
WILL POST A LEAGUE TABLE SCREENSHOT TOMORROW
Last edited: May 31, 2013
A

Like the idea of the story considered doing that myself, Only problem with the story to me is 1. A little unrealistic with the 100+million for a league one side & 2 there's not enough spaces in the story its all crammed together.
S

AldoKemp-1 said:
Like the idea of the story considered doing that myself, Only problem with the story to me is 1. A little unrealistic with the 100+million for a league one side & 2 there's not enough spaces in the story its all crammed together.
Click to expand...

I do admit the budget is unjust for a League One club and probably breaks every financial fair play rule coming into effect but Rene Meulensteen didn't spend it all and usually, take Arsenal for instance, it's widely reported they have a colossal budget but they always leave some money to be kept.
S

Gillingham 1-2 Wolves
Evans (14), Robson-Kanu (90) - A late winner against a team out of the relegation zone by goal difference isn't good enough
GILLINGHAM - Burton (62)

Tranmere 0-2 Wolves - Tranmere's loss is our gain. Three points and our lead at the top of League One becomes more secure.
Davis (29), Grainger (60)
TRANMERE - Bakayogo sent off (11)

December
"My team unbeatable. We will remain unbeatable and win the league with a record points haul." - A cocky Rene Meulensteen

January
"We have been solid all season and our work is paying off, with a few new faces we can become unstoppable." - Rene Meulensteen to WolvesNews

FA CUP THIRD ROUND - It's a shame we didn't have a major cup run but to lose just one nil to a EPL team is okay.
Wolves 0-1 Reading