This is Conte's first tactic of the new year (not in FM though) and his idea behind was that the players role and personalitys fit together like Lego. 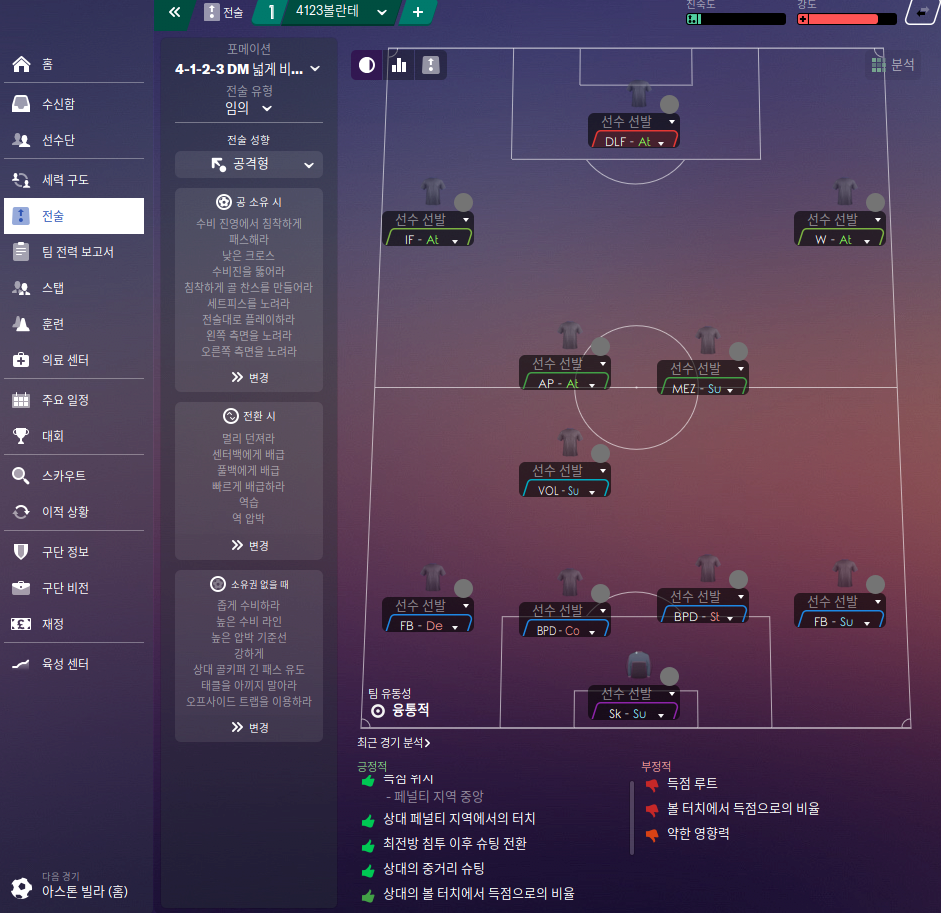 Notes:
A lot of the players have a PI to mark their opposite number.
With Wolves, Diogo Jota was the top scorer, followed shortly by Raul Jimenz.

Positions
Gk- Sweeper Keeper support.
It is the role that starts the buildup at the end of the rear buildup.

DL-Full Back Defense
Originally, I thought setting a safe pullback
It is ideal to form 300 through sticking positions when attacking R side dribble.
During the game there was no suitable player (green light), so I set it as a fullback defense.
It is a position that requires more defensive stats. It's a bit passive in attack work,
It is a position to defend more effectively when defending. (AMR mark)

LCB-Attack Defensive Cover
With the positioner on, I set the pressure to be weak. You can think of it as the last defender in the field.

RCB- Attack Defensive Stopper
We've set it up to give you more pressure and mark the attacker than the LCB (STC Mark).
First of all, the role of stopping the opponent's attacker first is good position, physical degree is important position.
If you don't have the right offensive defender in the lower teams, you can play as a central defender.
Pass it safely and add a short pass.

DR- pullback support.
In this tactic, we set the dribble position to four
RB, RW, LF, MCL
This is the first place to start an attack on the R side.

The right winger and the right side are set to attack the R side.
Keep the Pass Safe instructions on, so the three R-side players would like to pass more smoothly and use the Direct Pass instructions.
It's also a good spot to pass the L side to the other side.

Sunfleet is recommended to dribble frequently, long pass preference.
Of the 400, he is the most involved in the attack, and he needs the ability (AML mark) in defense.
If you use a better player

DMCL-Segundo Volante Support
Segundo's role in this tactic is to clear the previous application.
Of course, you should play a basic defense role in defense (AMC mark).
It is a valid role in the accident cover of the Appme located in the front and the attack work that goes ahead in one step.
If you look at the overall game or the whole game, you will see a lot of ****
This is the intended setting for doing this, with almost a rush.
If our team doesn't have a suitable player for the lower or Volante role, you can change it to Sumy support.

MCL-Appme Attack
The key agent in this tactic.
As long as you are free to play defensively, you should use a good playmaker.
If you have a through-pass or long-pass sundae
It is an important position as it is almost a participating position. With the wrong player, the tactics for uploading
It may not be an ideal place, so please use a good playmaker first.

MCR-Mezzala Support
In this tactic, the role of the supporter of the Mezzalah
It is a pass linker to help pull back and winger.
If you attach a central penetration sunle to a basic type of player
I think it can be set to be a type of meal and a night meal.

RW- winger attack
The role here is to have a chance to attack by crossing or boxing after the first breakthrough.
This is the first (attack-centered) option in the previous attack.
If you want to use the player's head, Sunple prefers to break the right side and pass the long pass.
I think you can use a player with good personal skills and dribbling skills.

LWF-Inside Forward Attack
The role of the personnel gun is to be a box-in due to the cross or the attacking ability of the player.
The goal is to score the first scorer or the second, depending on the player's abilities.
Sunples should prefer center penetrating and 2: 1 pass preferences and use a semi-footed player from the side.

ST- Deep Lying Forward Attack, Forward Forward Attack
Two roles were used.
When setting the role of Deep Lapo, it is a role setting that can be completed by supporting side forward when attacking by giving freedom to personal guidelines.
Forward forwards can be set if there is a good finisher on the team (unlock position freedom).
The default tactic is set to Deep Ragong, so you can change it when you use it.

Training
Tactics-teamwork-cohesion assuming you start with preseason in training
After-Defensive position, attack position is set and the rest is Sukhoiim,

Individual training can be done during the pre-season and fixed time, with position training at twice the intensity.
If you are both suco delegation, you may be wrong, so please confirm your suko delegation.

Other
Squad management is a must.
The press conference was delegated by Sukhoi.