So I decided to go back something more akin to the original shape and formation with the latest tweaks. I changed the anchor back into a DLP but this time he would be on defend not support. The 3 CAMS included an enganache and 2 out and out CAMS on attack. The wingbacks were brought back and would now operate in a traditional back 4. The idea was the enganche would hold has position and would have space due to the Cams running from deep allowing him time and space to find a pass for the runners or strikers. The dlp would just hold his position in the middle of the pitch shielding the back 4 in defence, but also being the pivot in attack. 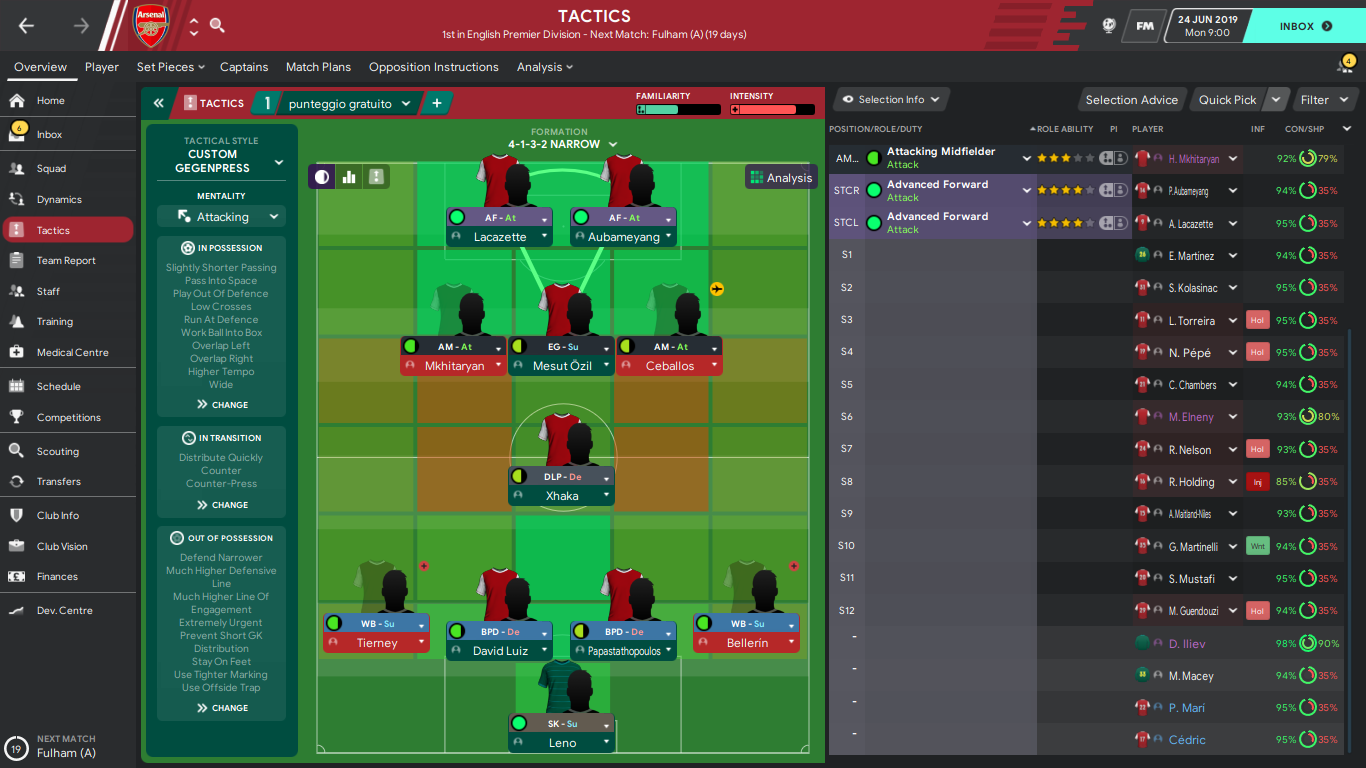 The results of this variant were impressive finishing 3rd in the league and winning both the FA Cup and Europa League. Defensively it was really good only conceding 28 goals and in attack 80 goals were scored. Slightly disappointing given the forwards available for Arsenal. 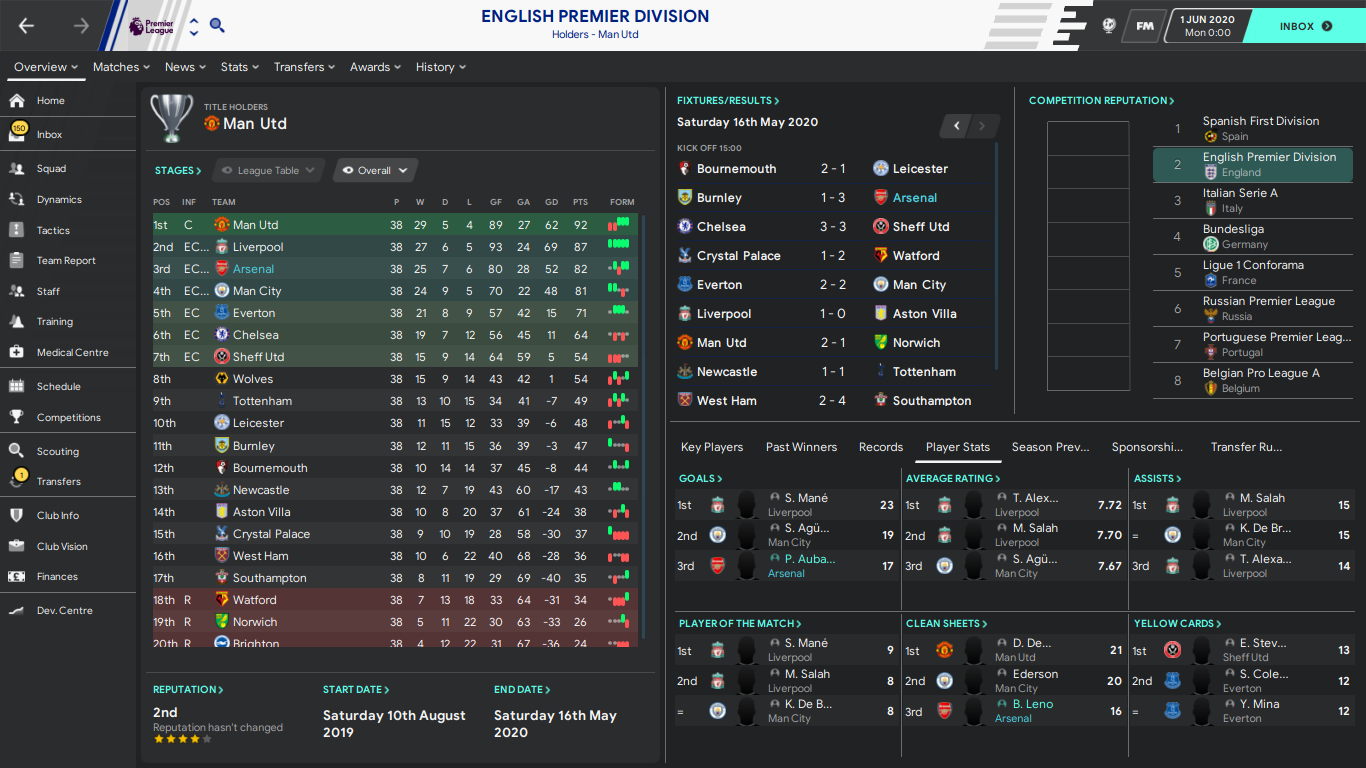 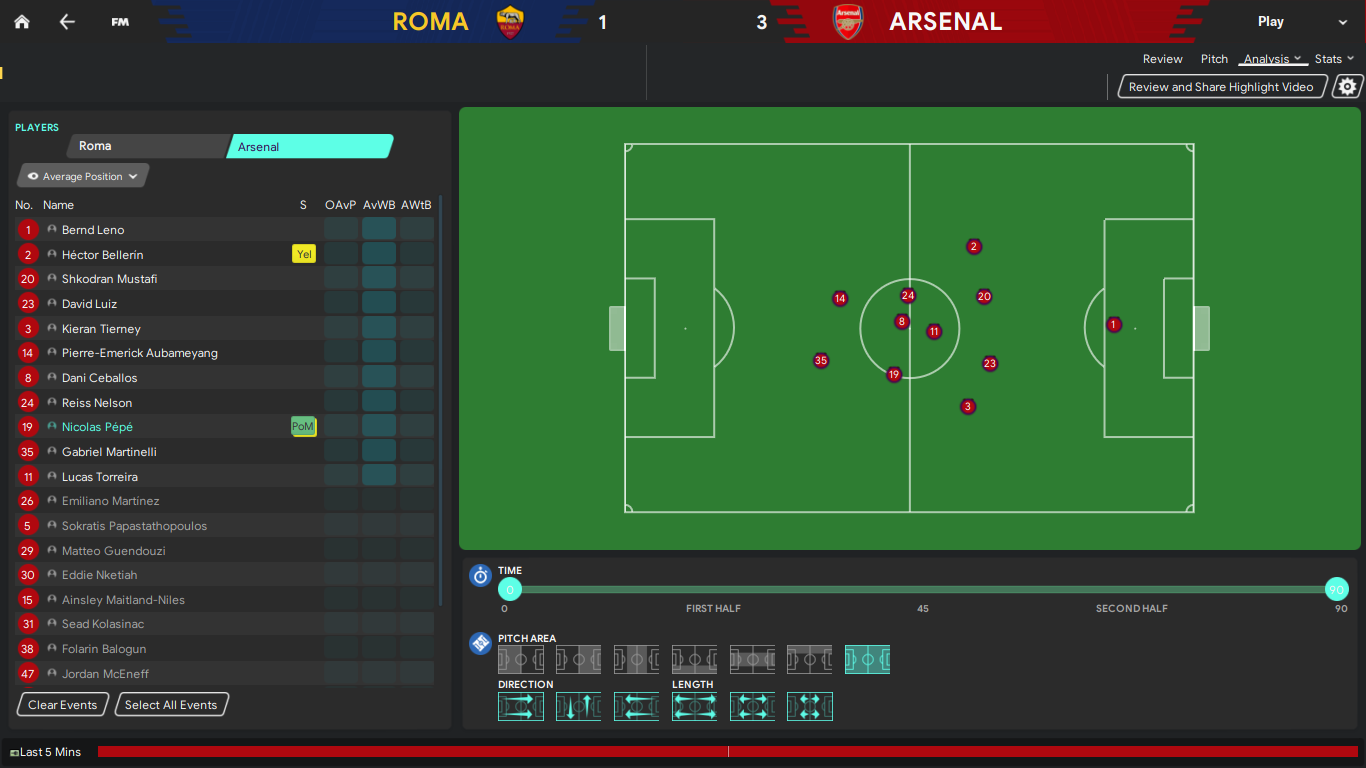 I decided to re-run the season again but make some more tweaks in an attempt to increase the goal tally without compromising the defence. I pushed the wingbacks back into an advanced position and placed the outside CAMS on support and changed the enganche to a CAM on attack. 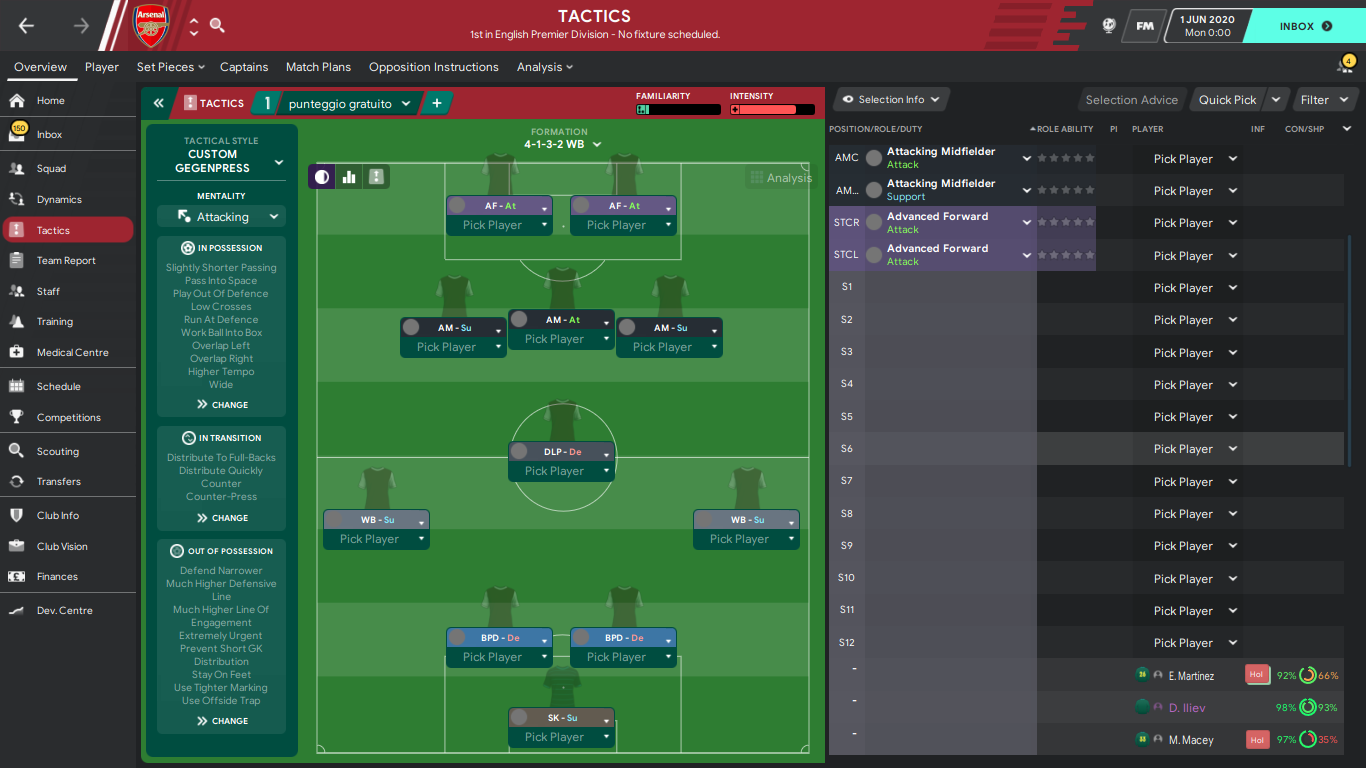 The results were fantastic Arsenal won the league by 5 points and only lost a single game over the season. The goal tally was 99 and goals against were 27. The team did not perform as well in the cups though. Interestingly the possession stats were 55% in the first test and 54% in this save this was totally unexpected as possession is not a priority in the setup. 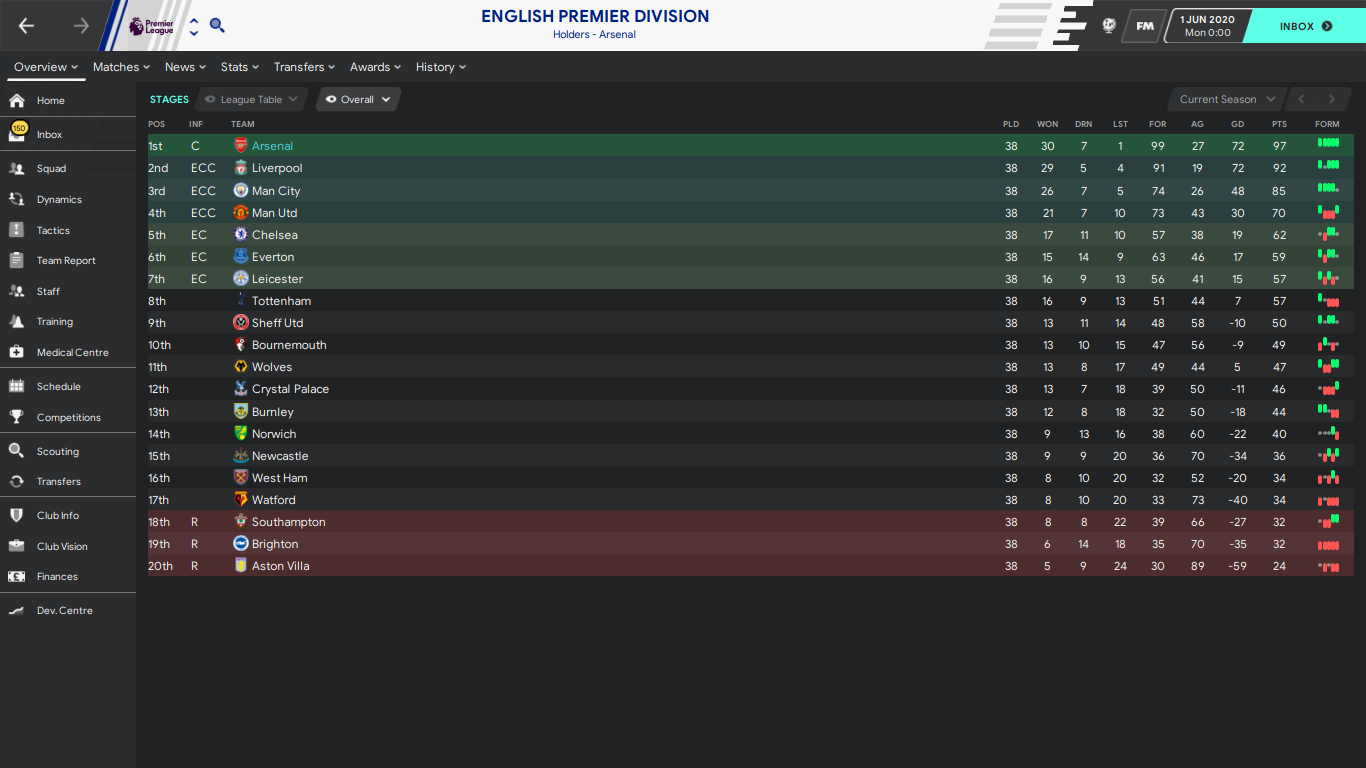 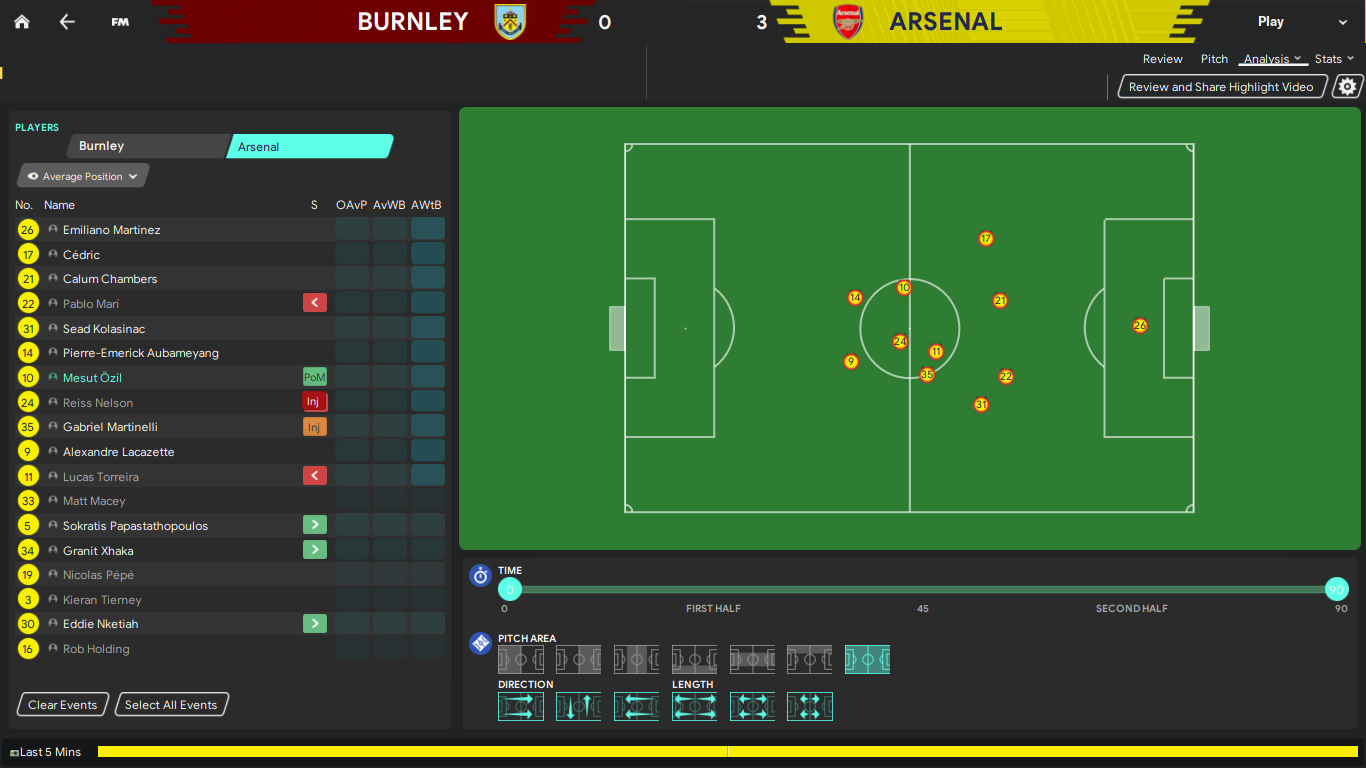 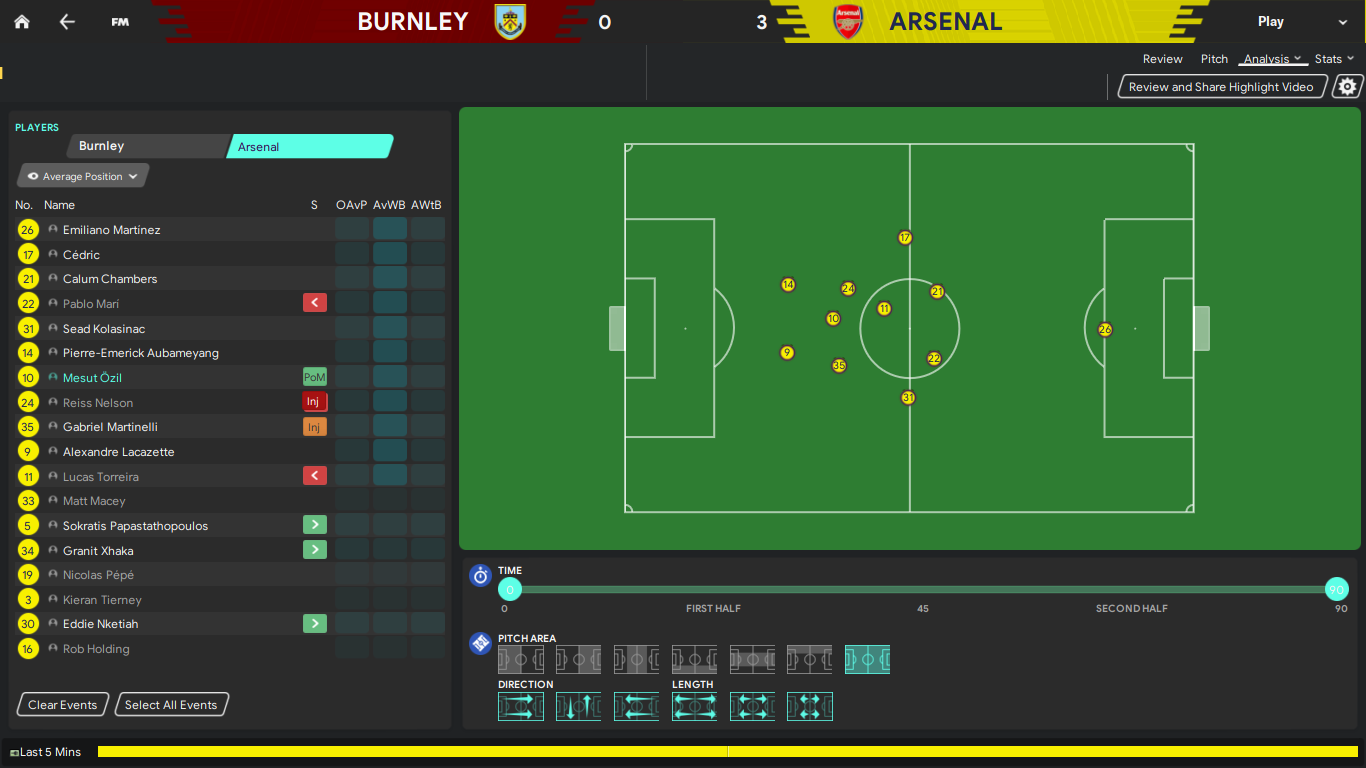 Instructing the front players to tackle harder and mark individual players helped to stifle teams and also allowed our team to regain its defensive shape by giving away tactical fouls to stop counters.

After the feedback and comments on the initial release of the tactic, I have set about trying to tighten up the defence without compromising the attacking phase of play.

The obvious change would have been removing a striker and dropping them into a holding role, however, I decided against this option and went with dropping a CAM into a deeper position. The centre CAM has now dropped into an anchor role, the reason for this I thought it would free up the advanced playmaker and wingbacks so they would still be plenty of bodies in the attacking 3rd.

The DLP became the AP, the other changes came from the team instructions and player instructions. I added tackle harder on the forward players added mark tighter to all the players. 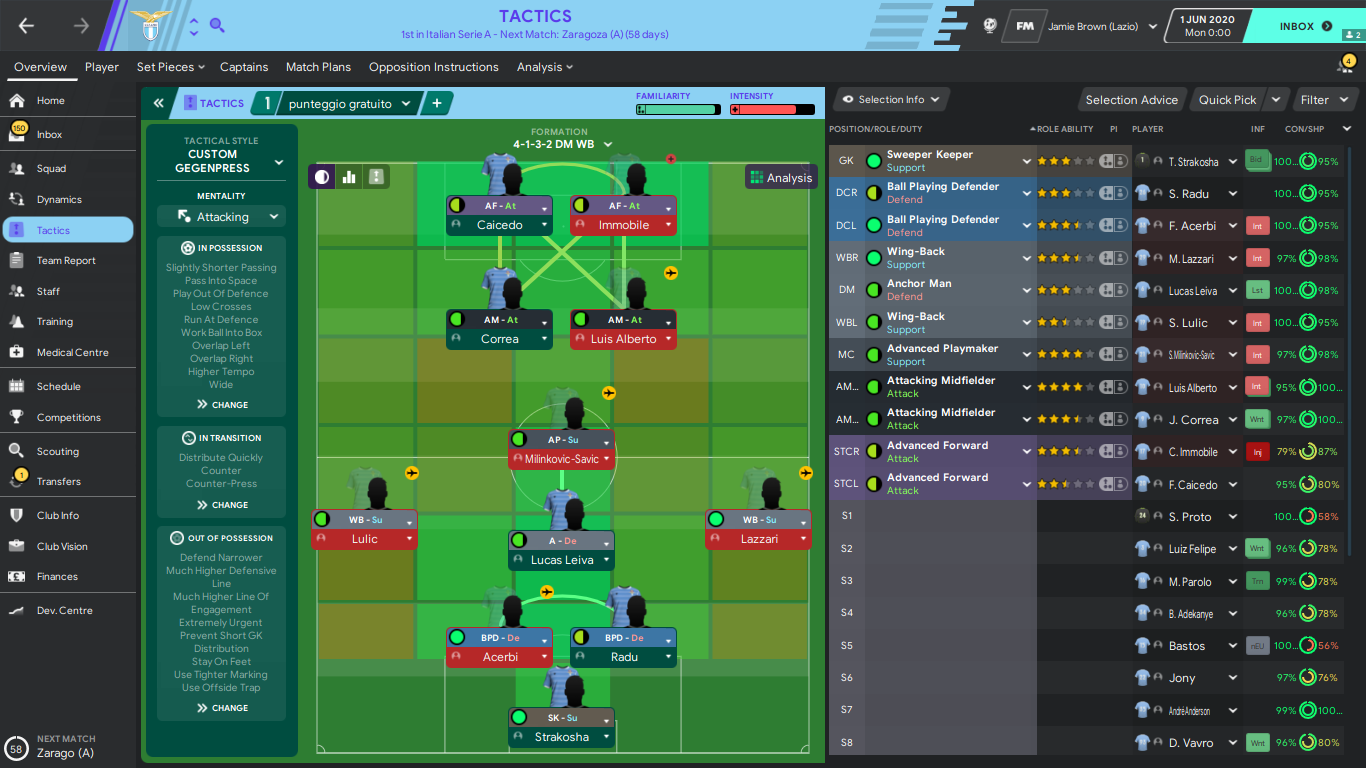 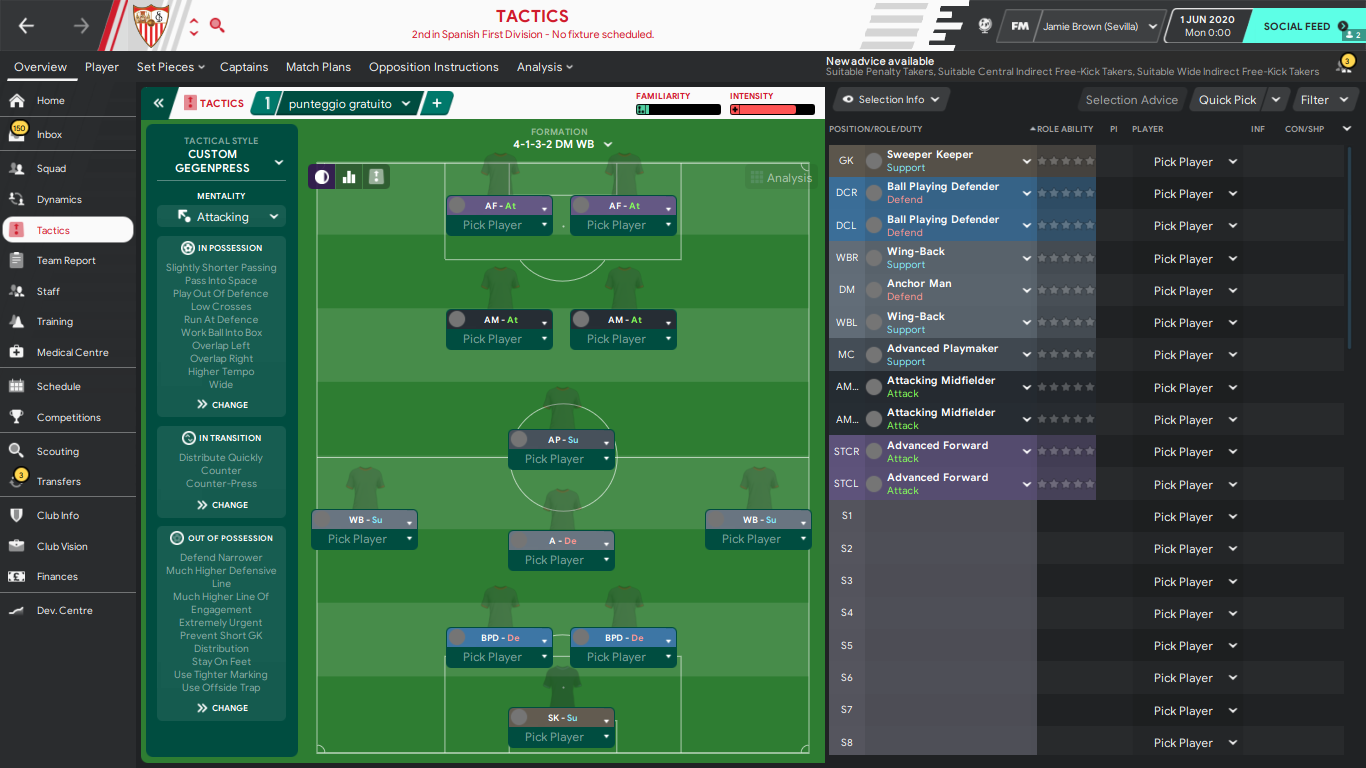 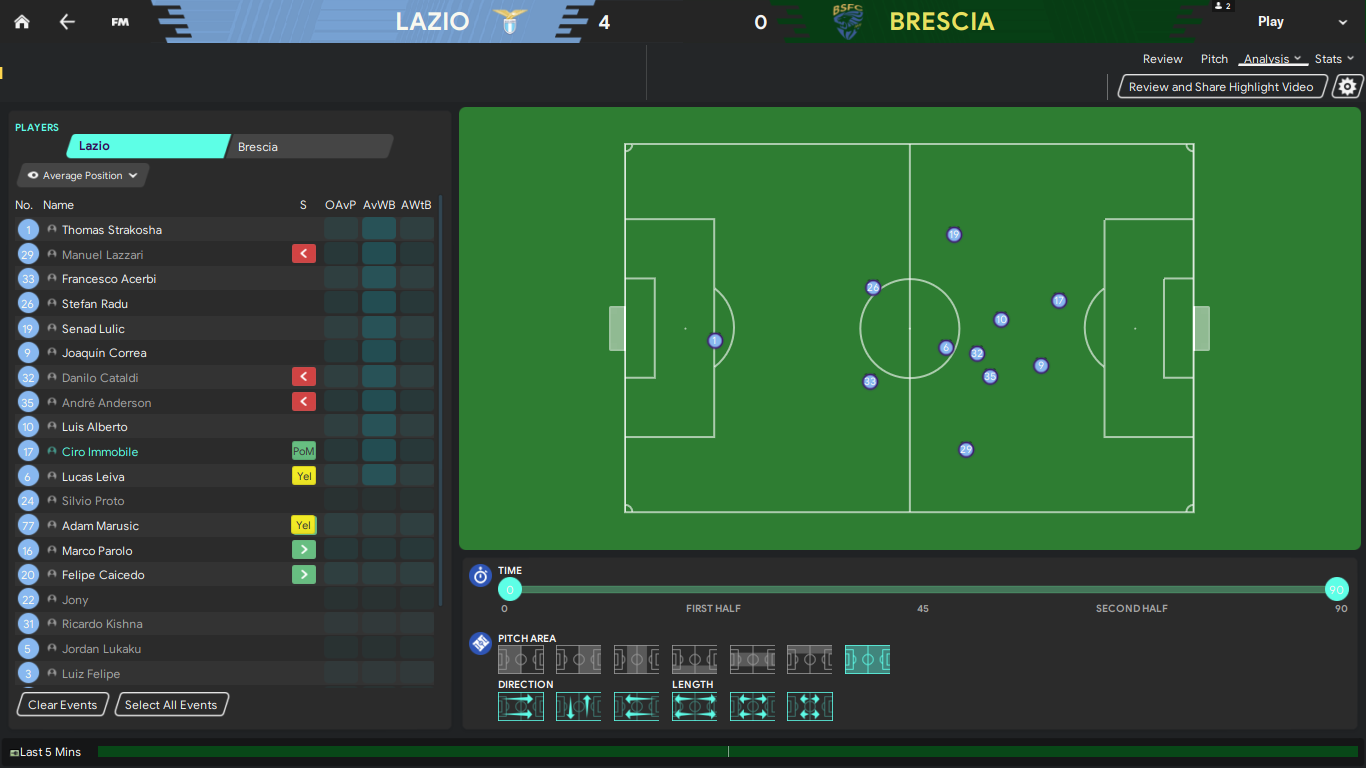 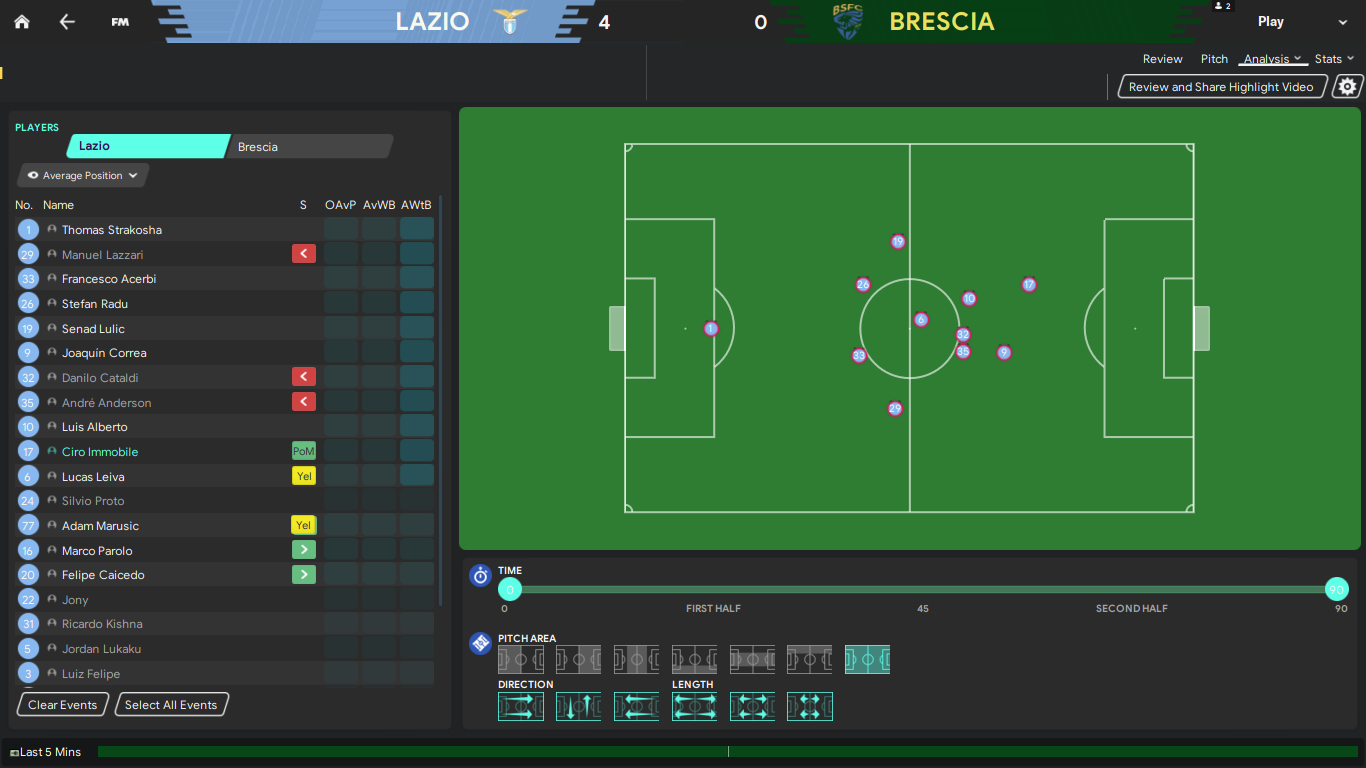 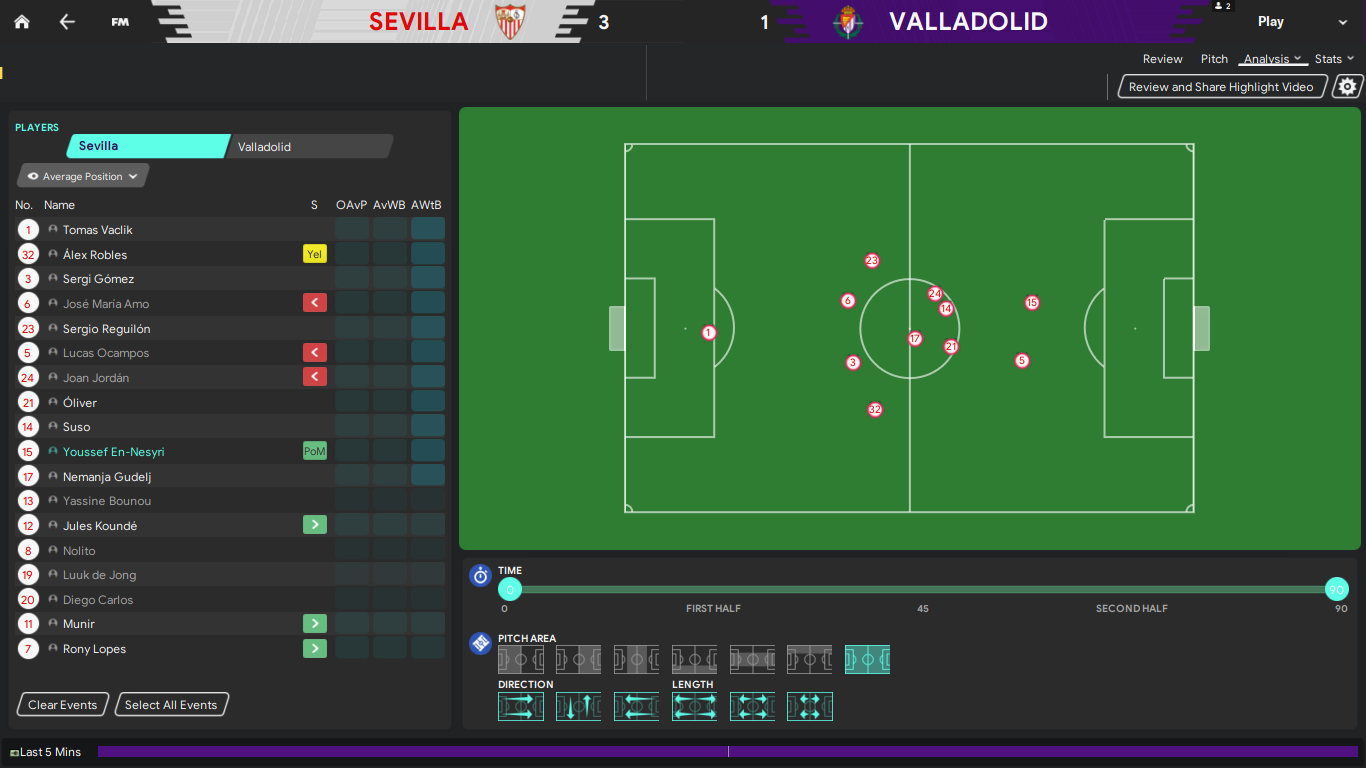 I used Sevilla again to get a direct comparison with the original tactic. I then used Lazio as they were similar in stature to Sevilla. In the original test with Sevilla, they finished 4th on 80 points with 25 wins, 5 draws and 8 losses. GS 104, GA 54, GD 50. Using the revamped tactic they finished 2nd with 87 points, GD stayed the same at 50 but GS and GA were 7 less. The team performed well but hit the wall towards the end of the season which actually cost them the chance of winning the league.

Lazio actually managed to win the league and the roles and formation generally seemed to suit them better than Sevilla. Again like Sevilla, they seemed to run out of steam towards the end of the season but still managed to cling onto 1st place.

Defensively the team were more compact and resulted in fewer goals being scored, attacking wise did not suffer too much but I felt players were occupying the same spaces whilst attacking so will try and rectify this. 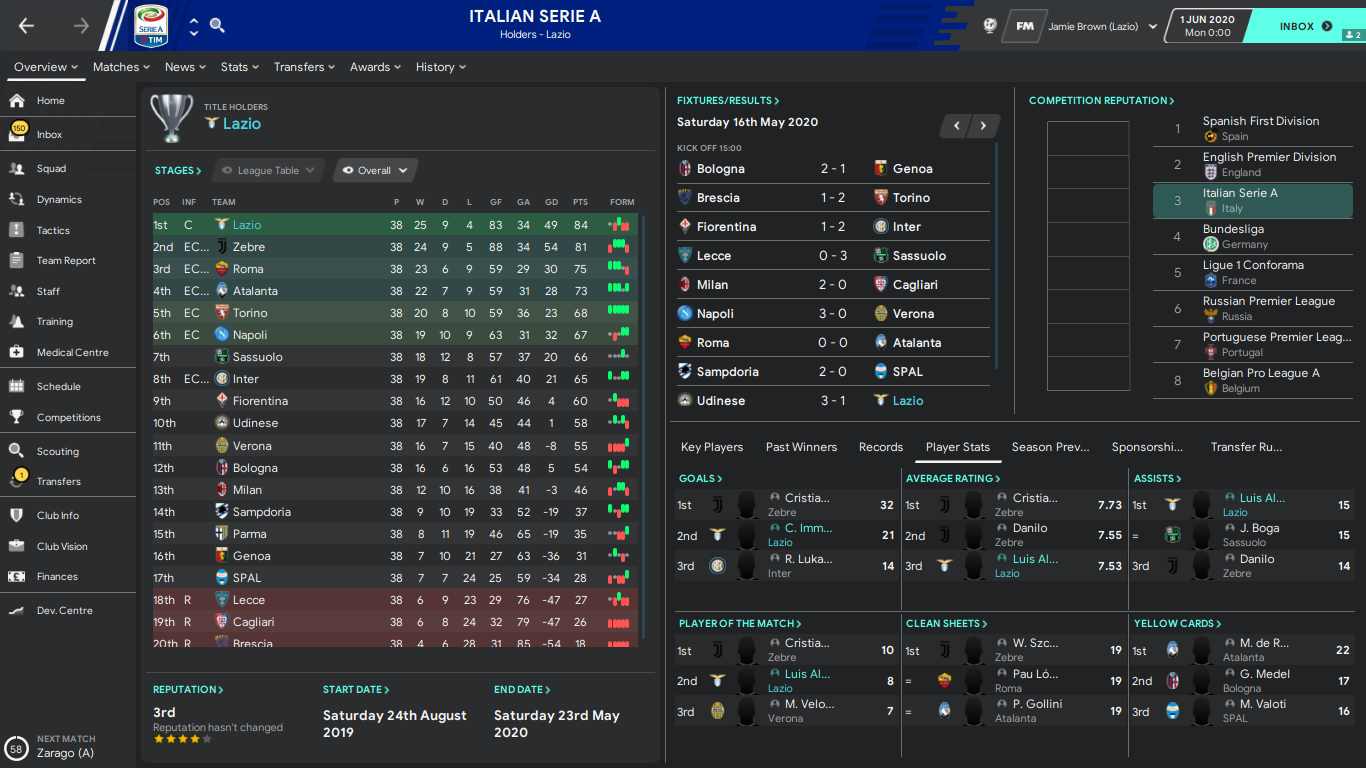