Download
Overview History Discussion
Welcome guys to my 4-3-3 Full Back Attack Tactic which is very much an attack focused tactic. It works by counter attacking and outscoring your opponents whenever possible in order to win games, but is also good at defending too.

I have used this tactic in 3 different simulated test saves in FM21 using Borussia Dortmund who are the main focus, Frankfurt and also Bournemouth in the Championship. It has both been tested on the current Winter Patch (21.3.0) and also the patch prior to this. The results covered in here are a mixture of both, and I can confirm the tactic works equally as well on both versions of the game!

You'll also find a link below as well to the Steam Workshop if you would prefer to download it via this method: 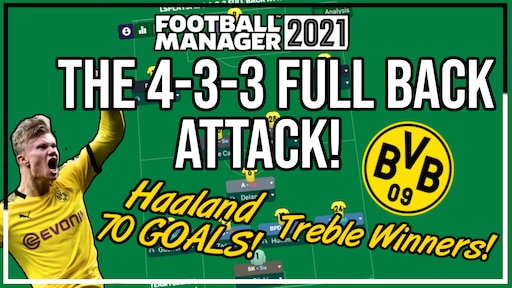 The tactic is a Narrow 4-3-3 formation which utilises inverted wingers/inside forwards and also relies heavily upon its athletic attacking fullbacks. It also features an advanced forward who is either very pacey and/or good off the ball which is where most of your goals will come from as you'll see shortly.

In every save each team has performed very well, both good defensively often having one of the best defences in the league as well as one of if not the best attack! With Frankfurt, Dortmund and Bournemouth each side has performed arguably above expectations. On top of that, in every save, the league Golden Boot winner came from the side using this tactic (Erling Haaland, Andre Silva and even Dominic Solanke who we all can't score goals). On top of that Haaland even managed to win himself world player of the year and score 70 goals in all comps!

As I have stated this tactic does phenomenally well offensively and focuses mainly upon counter attacking. However just because of that, does not mean that the tactic doesn’t work for big teams, because as shown by my Dortmund test, it most certainly does work for teams of any real size. 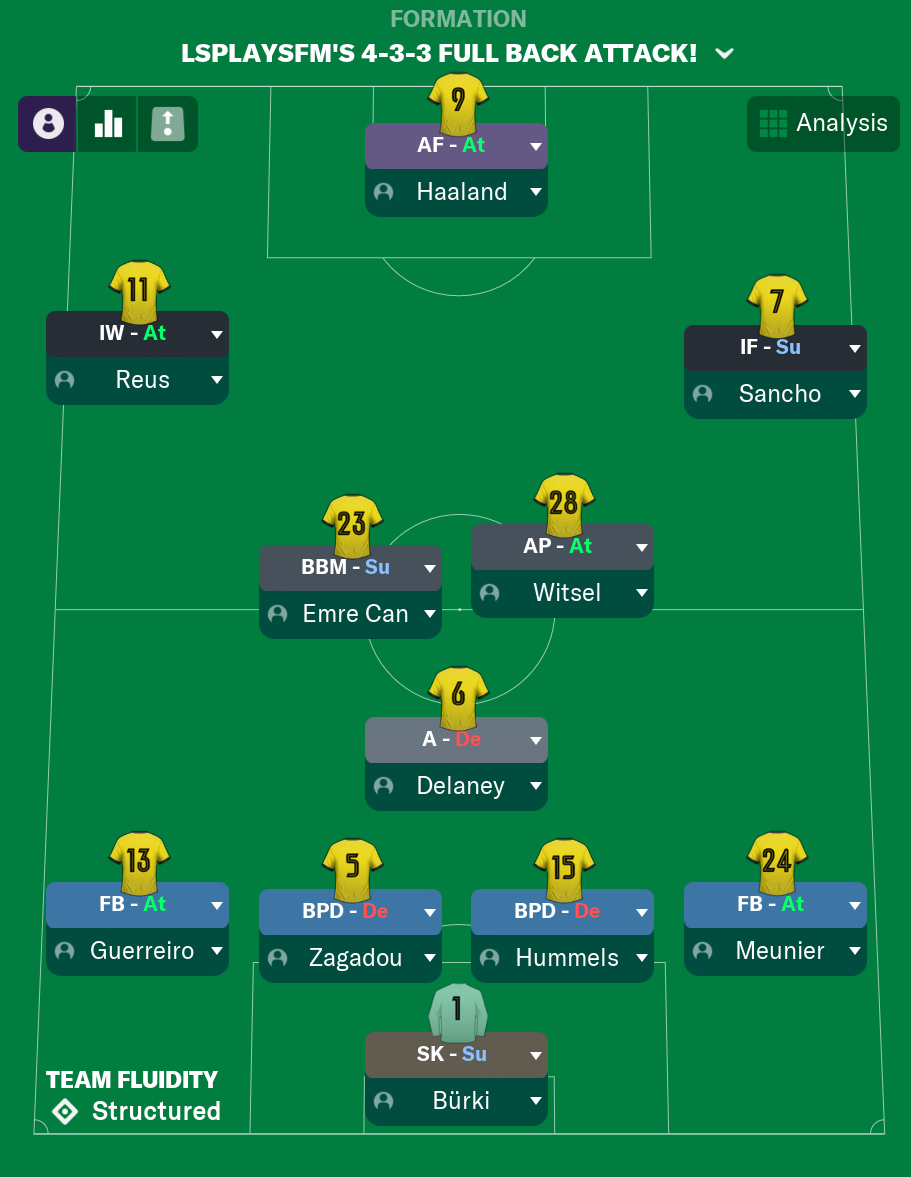 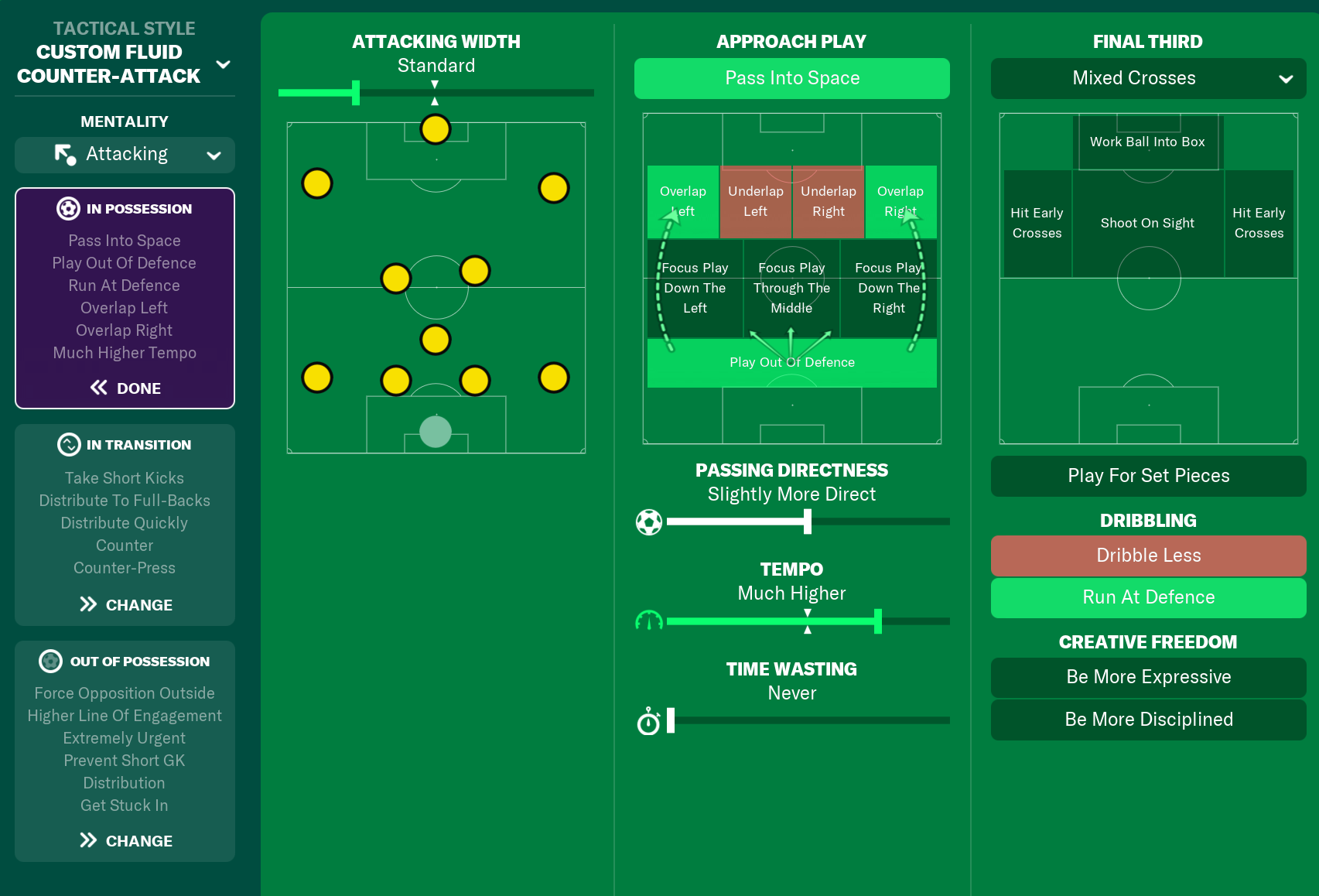 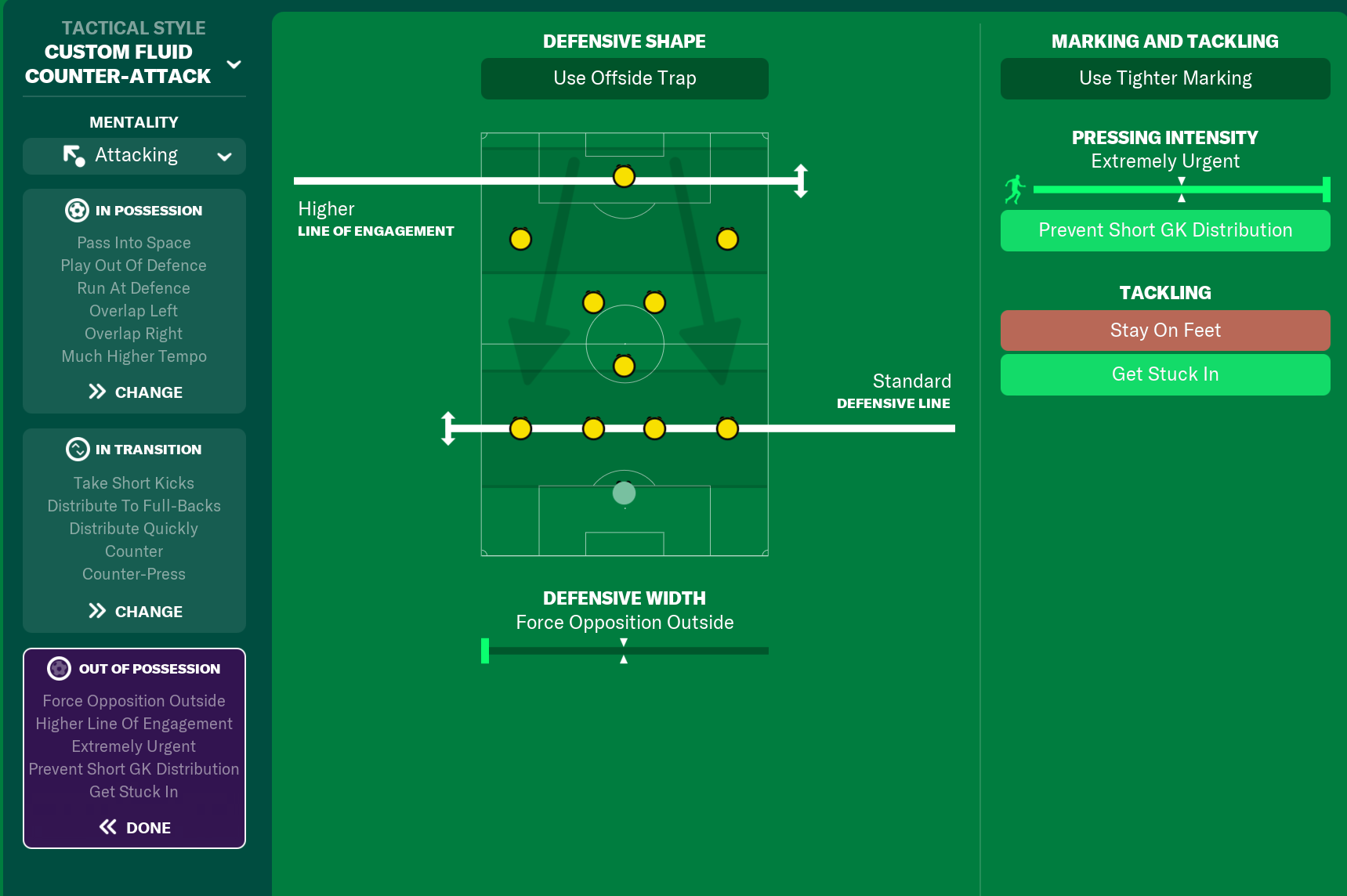 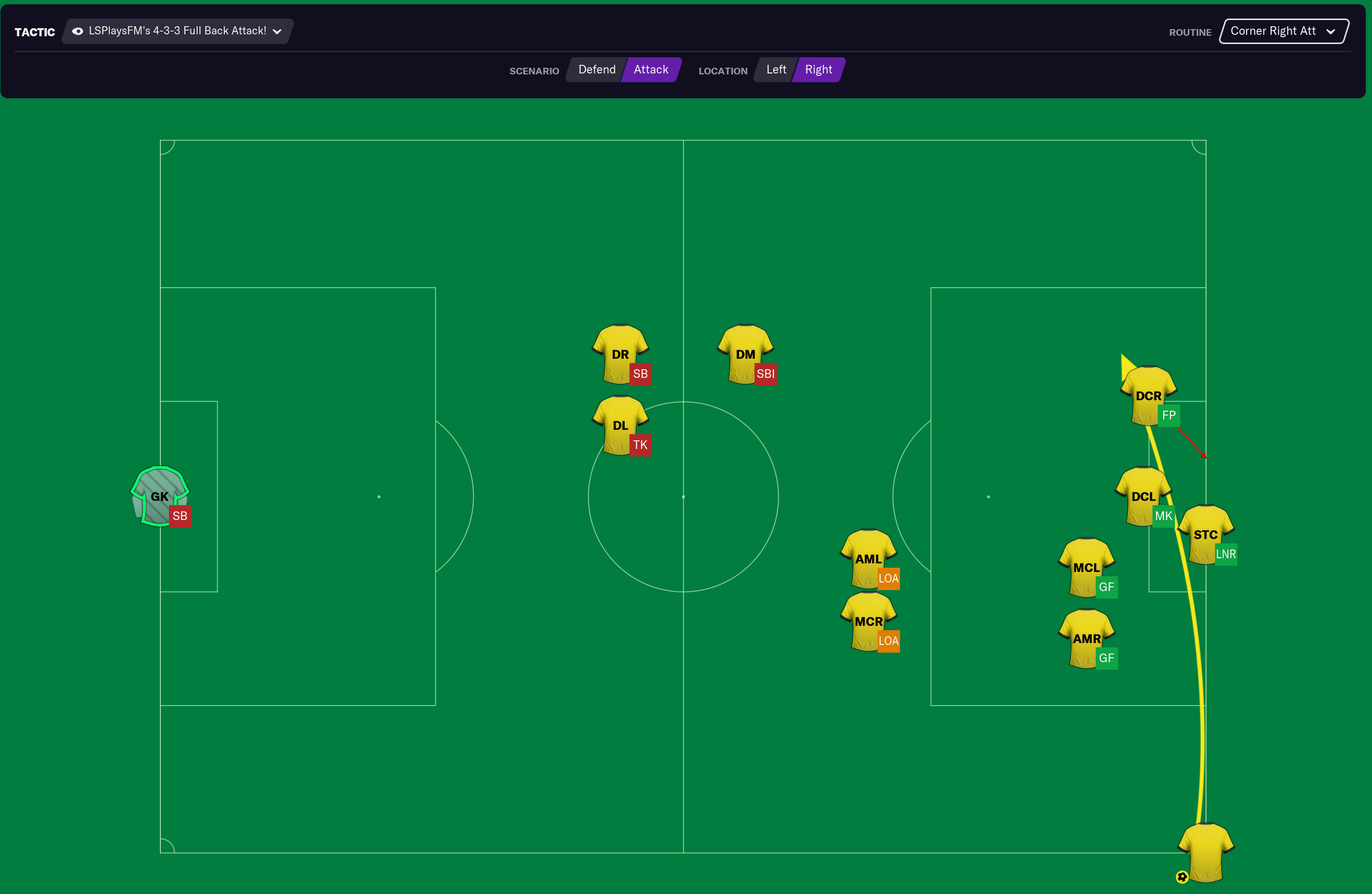 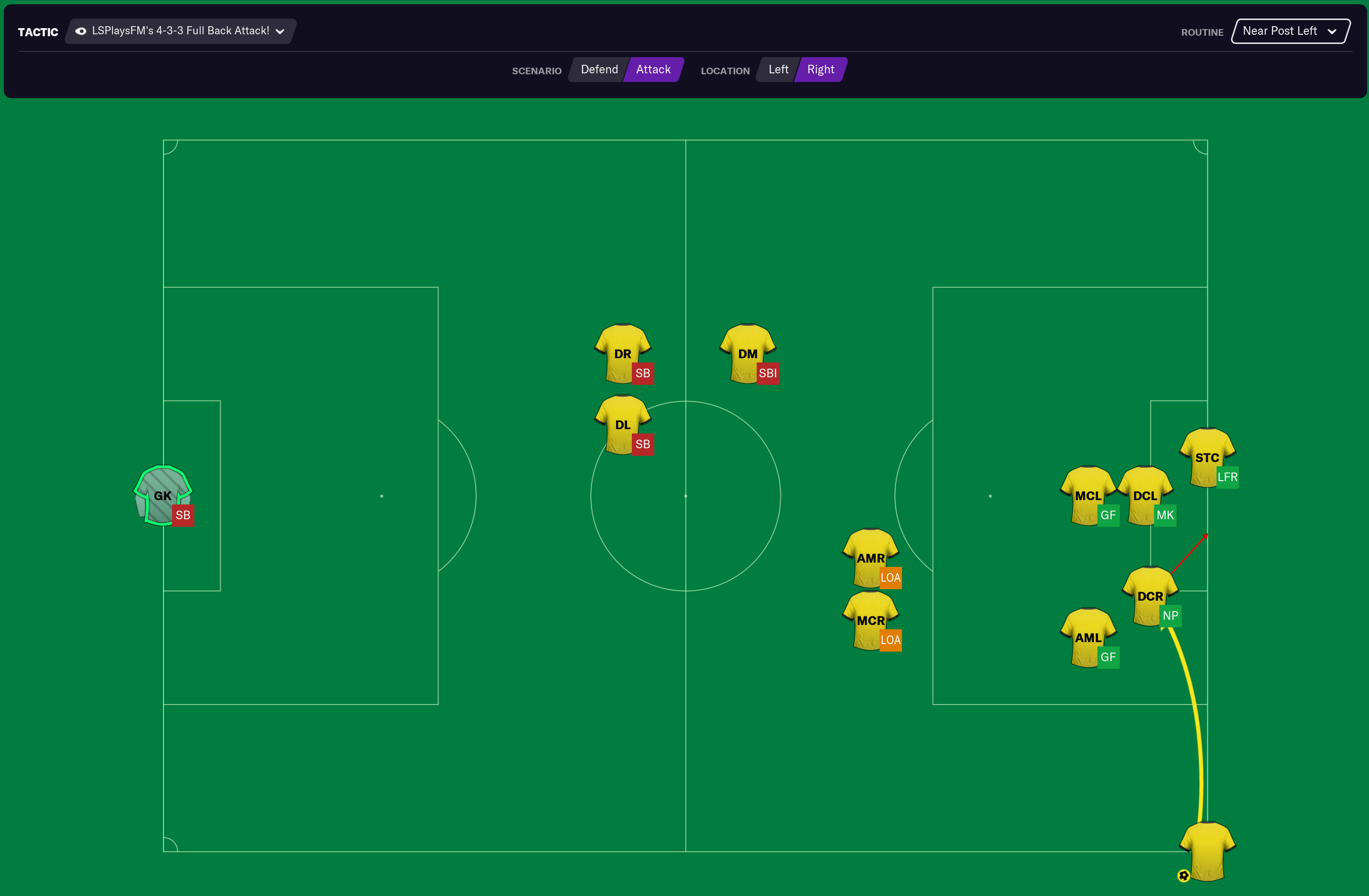 Just so you are aware with other Set Pieces these are set to default options as I found they worked well for my sides, should you want to adapt them then feel free.

Also in addition to this, my training & opposition instructions are set to be handled by the Assistant. In terms of player instructions these are left to the defaults that each role provides the players with. I have not adapted these so this may be something you look at improving yourself when using the tactic.

Using this tactic at Dortmund the side managed to finish comfortably as winners of the Bundesliga and they even almost went undefeated in the league losing only once away to Bayern Munich! They finished the season up on 85 points, with 26 wins, 7 draws and 1 defeat. In addition to this they also had the best attack and 2nd best defence in the league with 96 goals scored and only 28 conceded in 34 games. On top of this Dortmund also won a Domestic treble winning both the German Cup, Super Cup and reached the Champions League Semi-Final. The team even had the golden boot winner in Erling Haaland who was a monster in this tactic scoring 47 Bundesliga goals in 34 and 70 in all comps! He even managed to win the World Player of the Year as well. 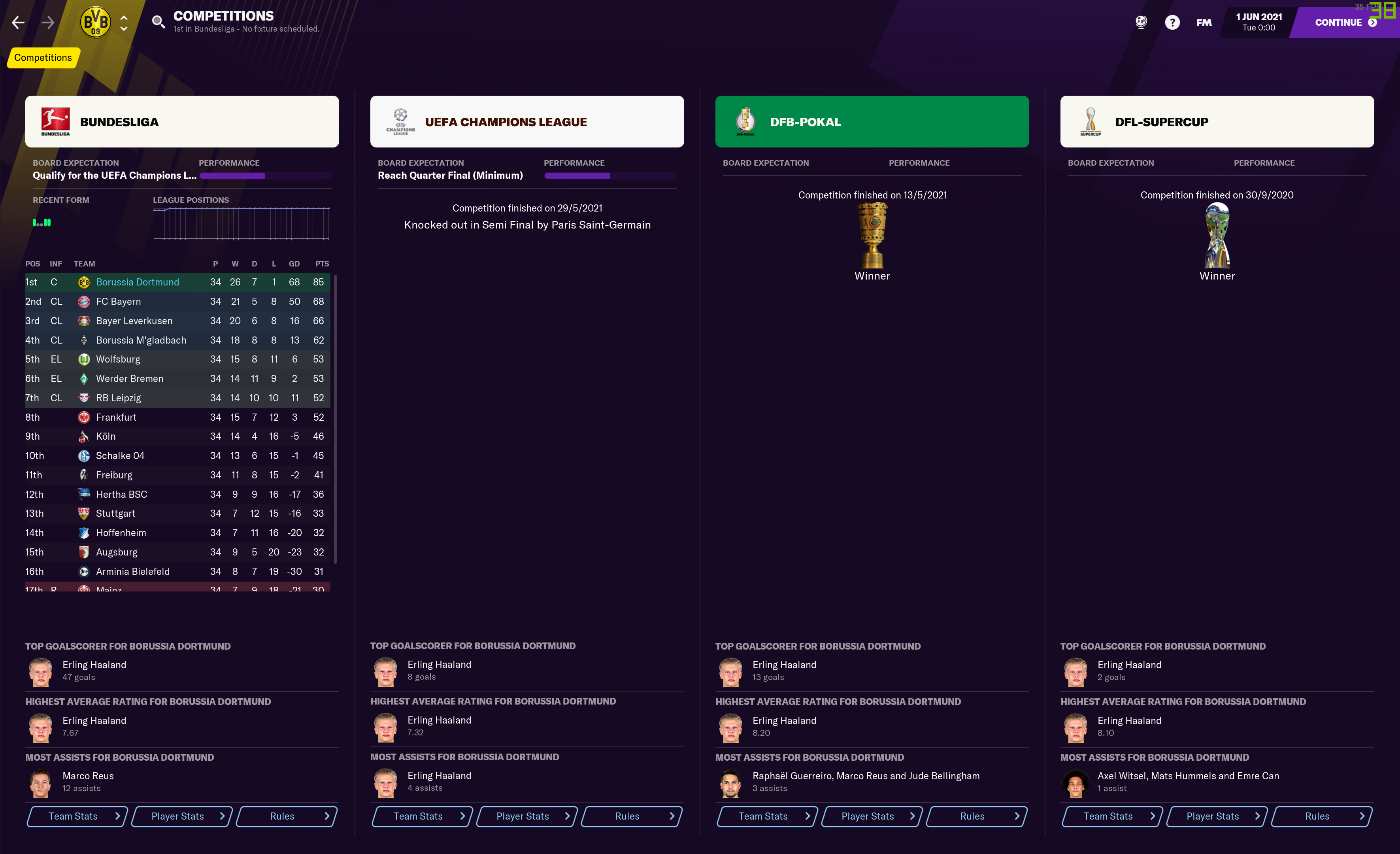 Below you'll find the analyst stats for Dortmund too, they were the best offensively and one of the most impressive defensively and also achieved a Goals Per Game in the league of 2.82. 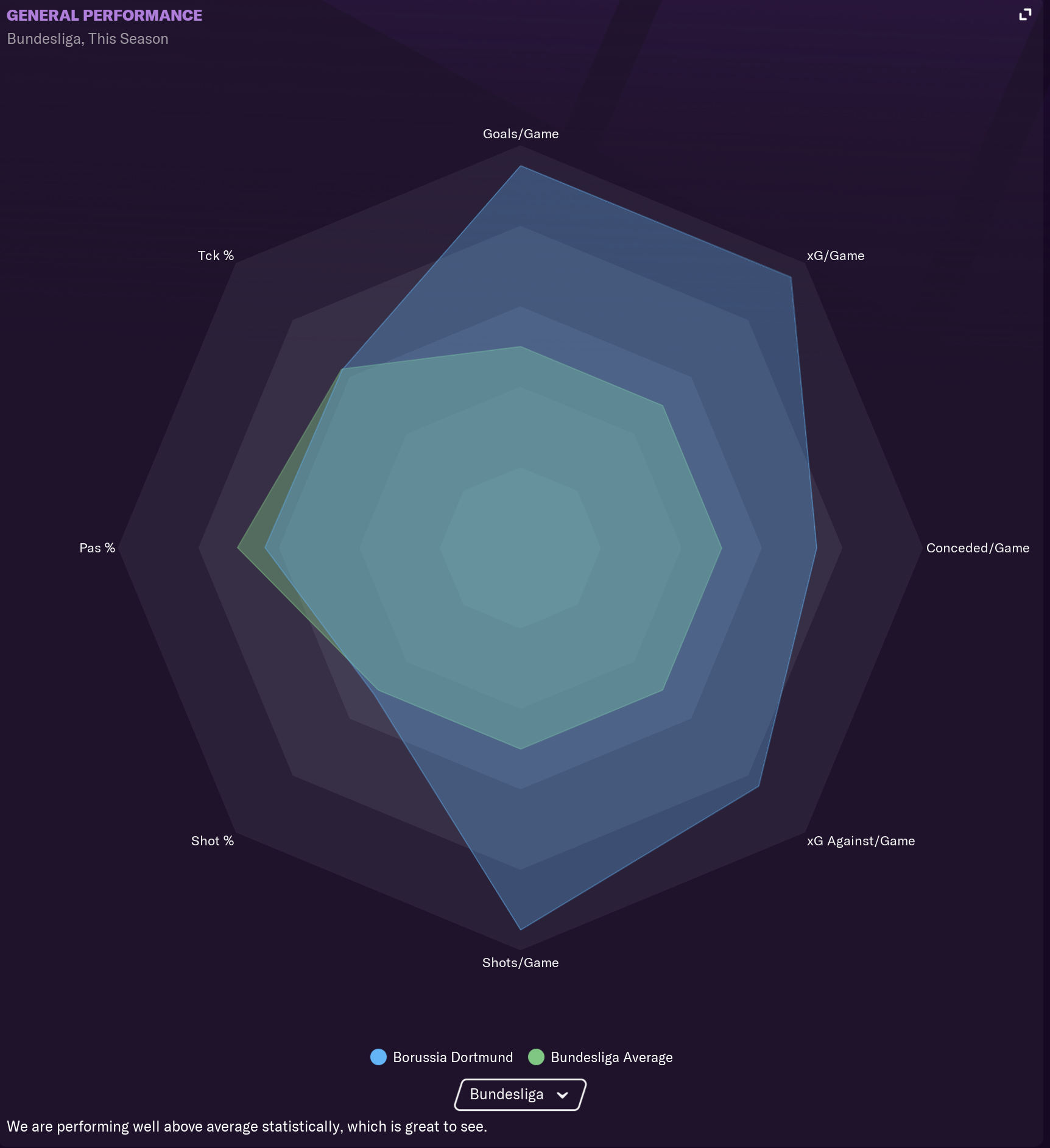 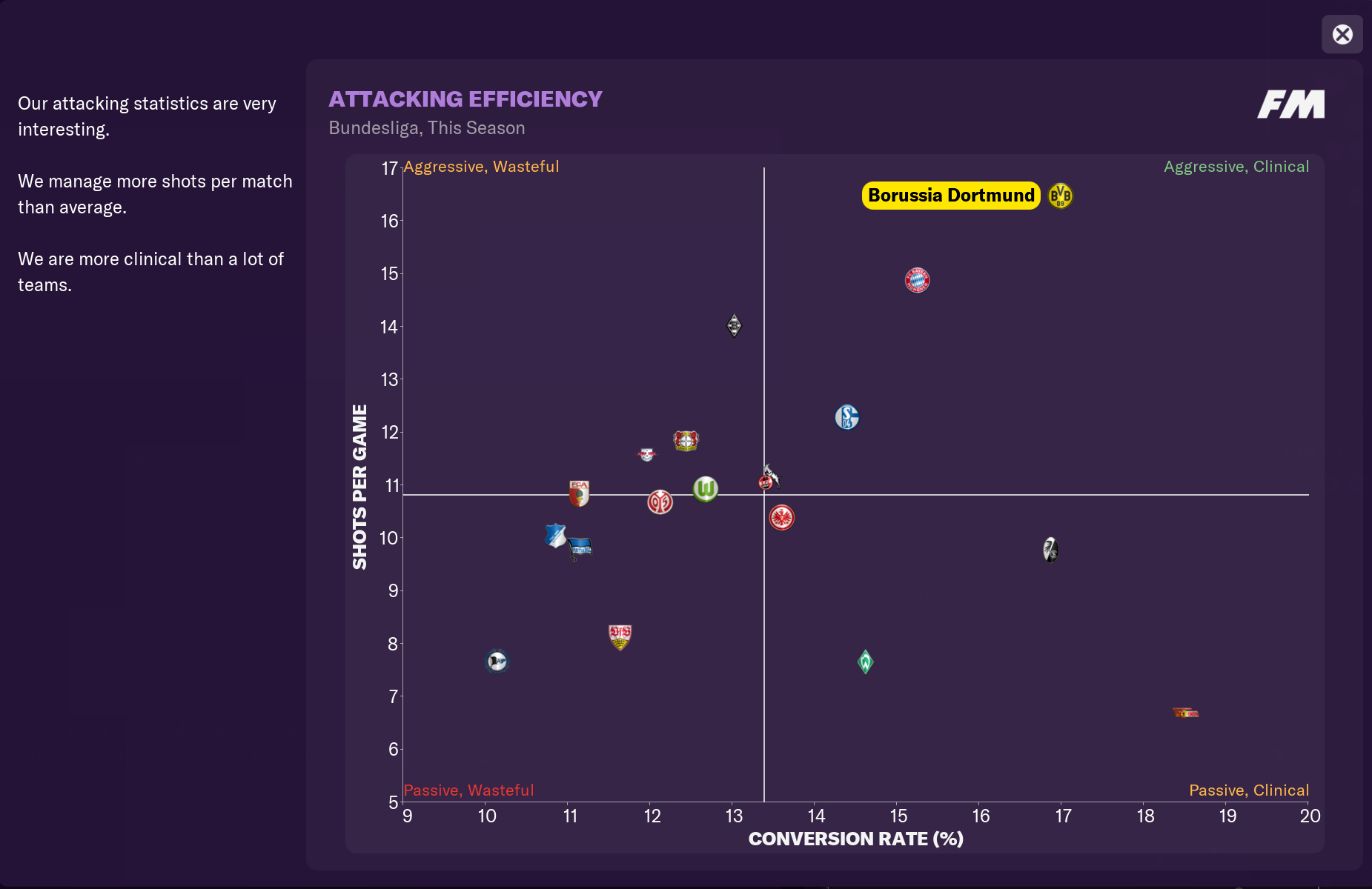 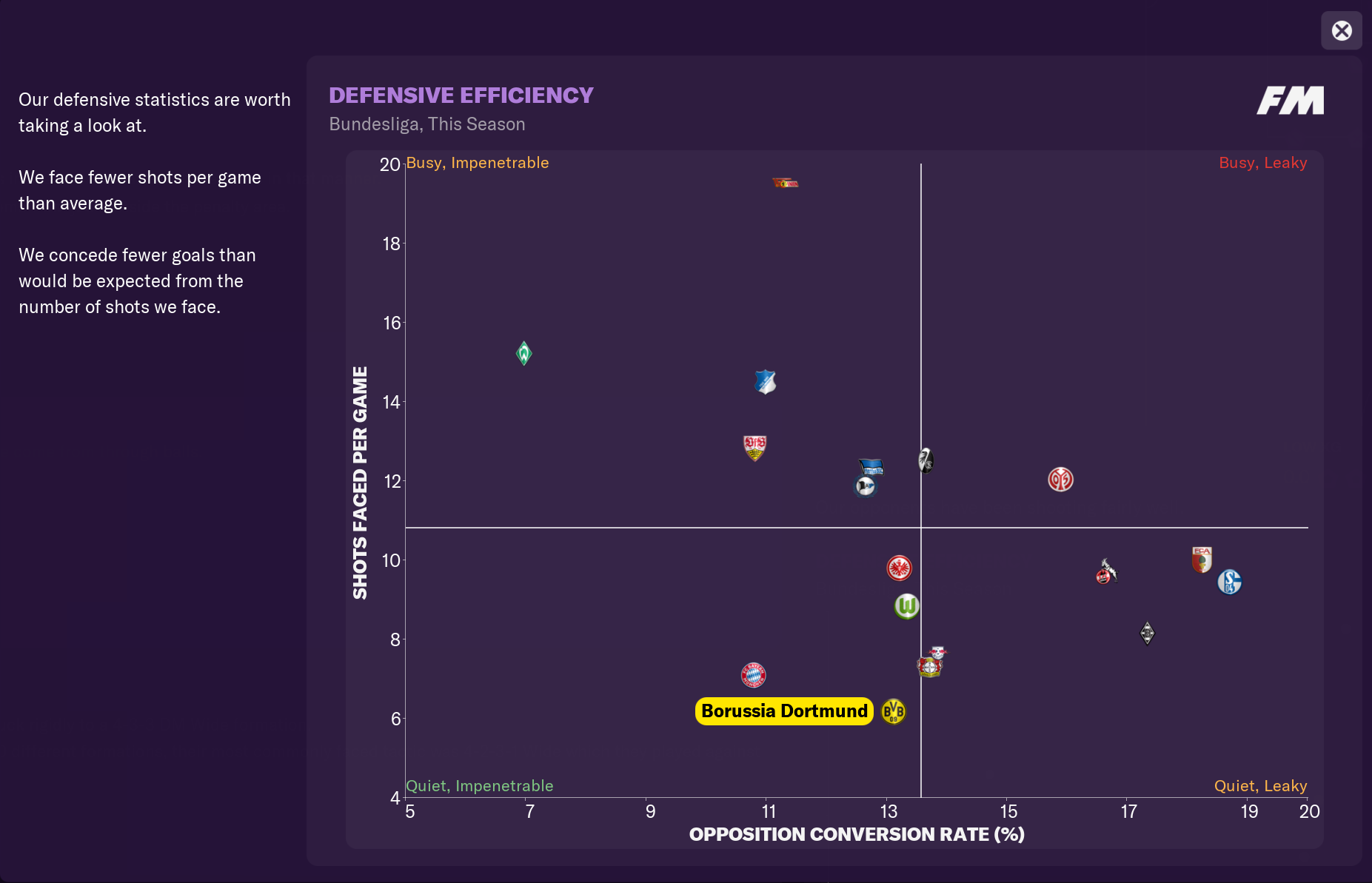 After the success with Dortmund, I also tested this with Frankfurt and Bournemouth to see how the tactic would fare with sides weaker than Dortmund and without Haaland up front. The answer is still very well. You can see how the Frankfurt side mainly lined up below: Using this tactic, Frankfurt who were predicted 8th finished far higher up in 3rd getting Champions League football and also reached the German Final losing to Schalke. The squad though not only performed well as a team, but individually, Andre Silva had a great season scoring 41 goals over 40 games! You can see quite how Frankfurt got on in their competitions and the League below as well as Silva’s stats too: Finally after Dortmund and Frankfurt’s success we come to Bournemouth in the Championship who I wanted to test so we could see how a second tier side could fare with this tactic and also one without a particularly great AF (Dominic Solanke). Bournemouth's side would line up something along these lines when using the tactic. With this tactic, they absolutely walked the Championship with almost a record points total of 105 (the record is 106). Its worth noting Bournemouth were only predicted top 6, yet completely destroyed the Championship only losing 3 games across the 46 game season. On top of that Solanke even managed to win the Championship Golden Boot scoring 29 goals in 45 appearances. You can see exactly how the side got on below: Overall that is how the tactic functioned and as you can see it functioned very well! 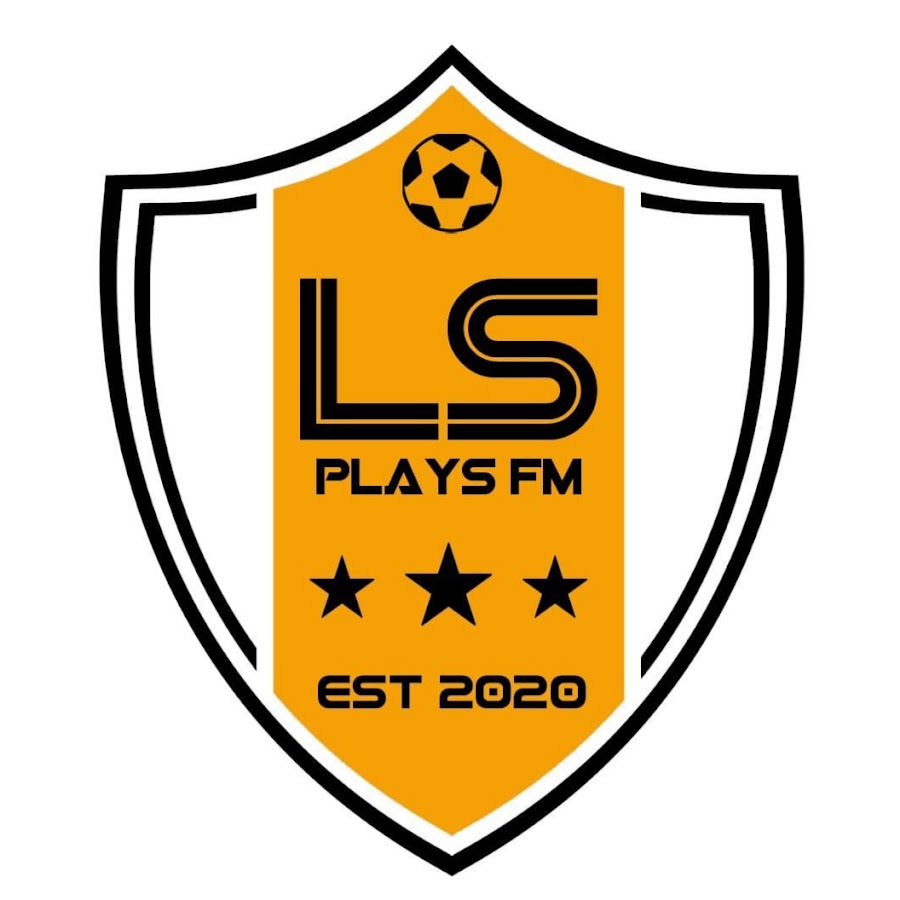 Welcome to LS Plays FM! My name is Luc and here you will find all of my Football Manager content that I will be bringing to YouTube. I release content at lea...