Download
Overview History Discussion
Welcome guys to my Narrow 4-3-1-2 Treble Tactic which is a very successful tactic and very much attack focused. It works by counter attacking and outscoring opponents, but also has a very decent defensive record as well.

I have used this tactic in 3 simulated test saves in FM21 using Manchester United who were the main focus and the most successful, Everton and also newly promoted Fulahm. It has been tested on the current Winter Patch (21.3.0) and works very well using it.

The tactic is a Narrow 4-3-1-2 formation which utilises very atheletic wingbacks who get up and down the pitch to both attack and defend, a pair of strikers who will provide the majority of goals for your team and preferably a very good mixture of technical and physical midfielders. In the attack the main goal threat is the teams advanced forward who is either very pacey and/or good off the ball which is where most of your goals will come from as you'll see shortly.

In every save each team has performed very well, both good defensively often having one of the best defences in the league or one of the better defences and also the best attack or again one of the best! With Man Utd, Fulham and Everton each side has performed above expectations all getting some level of Europe and performing well in multiple competitions. On top of that, in every save, the league Golden Boot winner or runner up came from the side using this tactic (Marcus Rashford, Ademola Lookman and Richarlison). On top of that in the simulation with Manchester United all three top goalscorers in the Premier League were United players, including Rashford, Martial and Greenwood with them scoring 97 across all competitions! 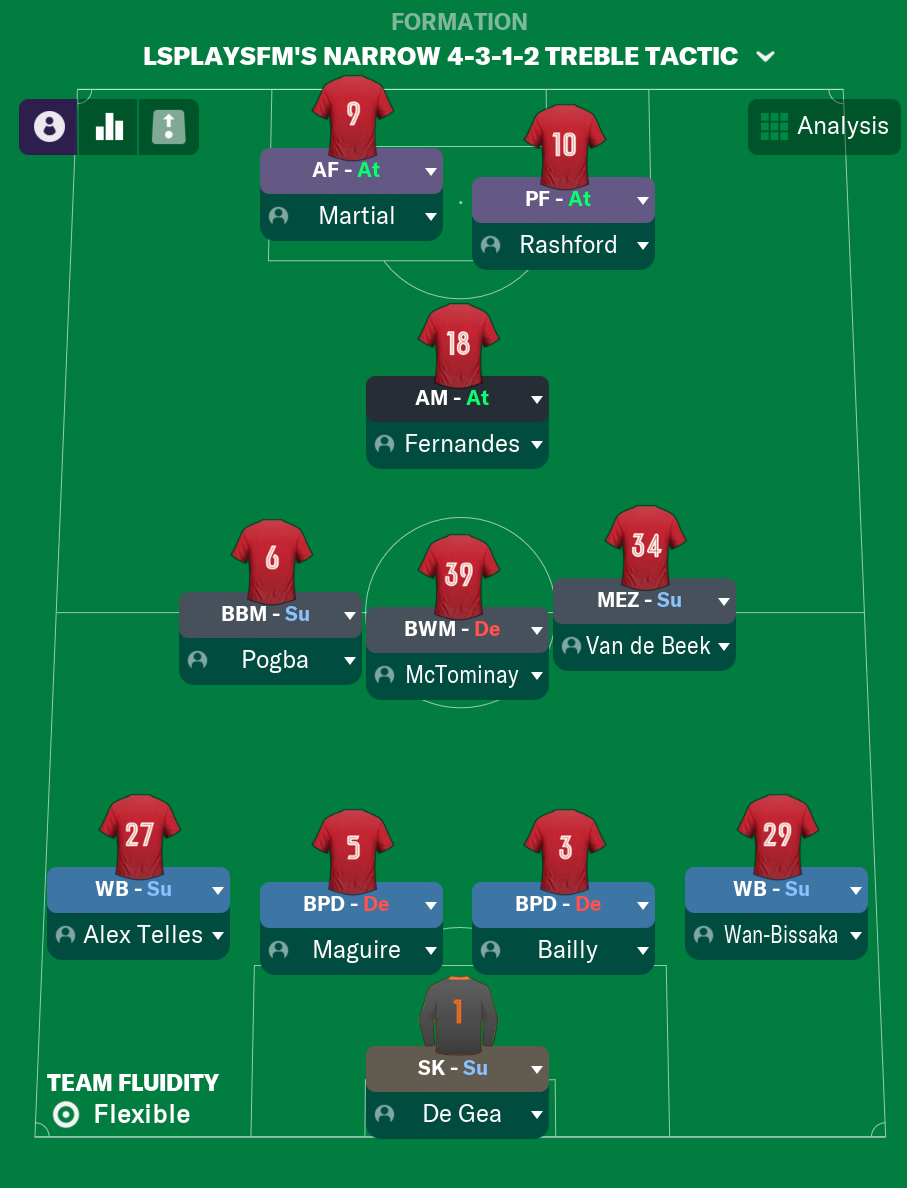 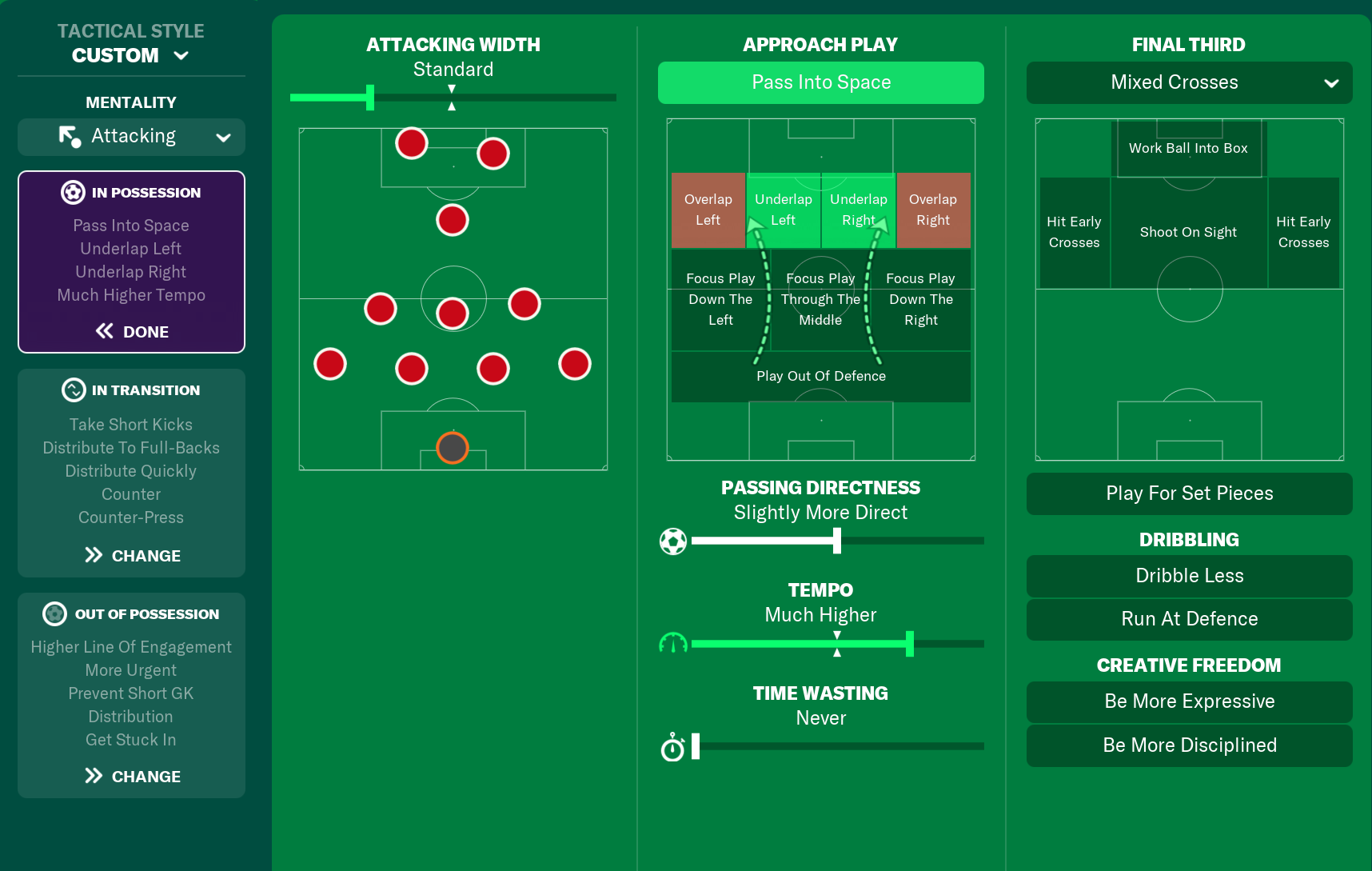 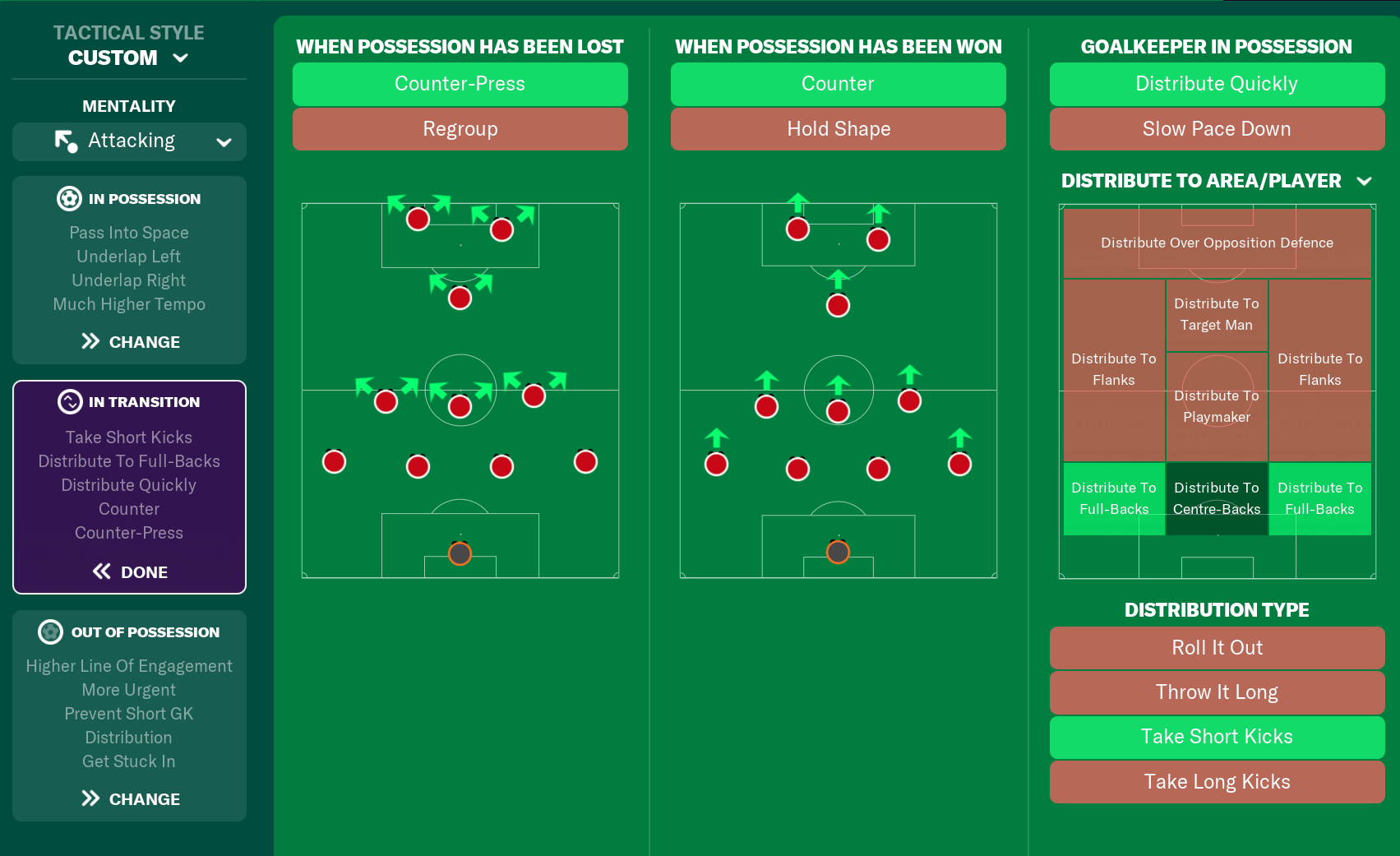 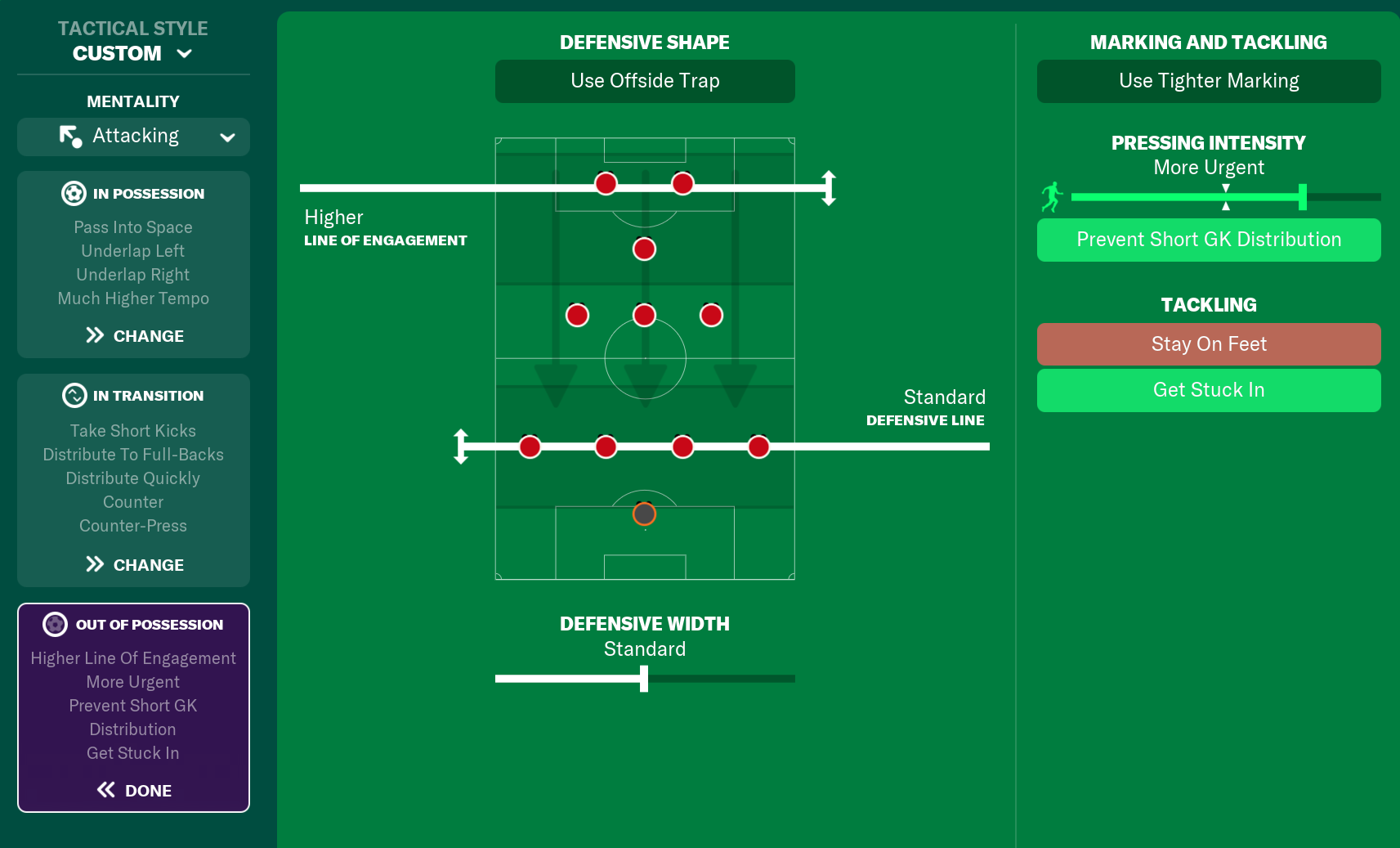 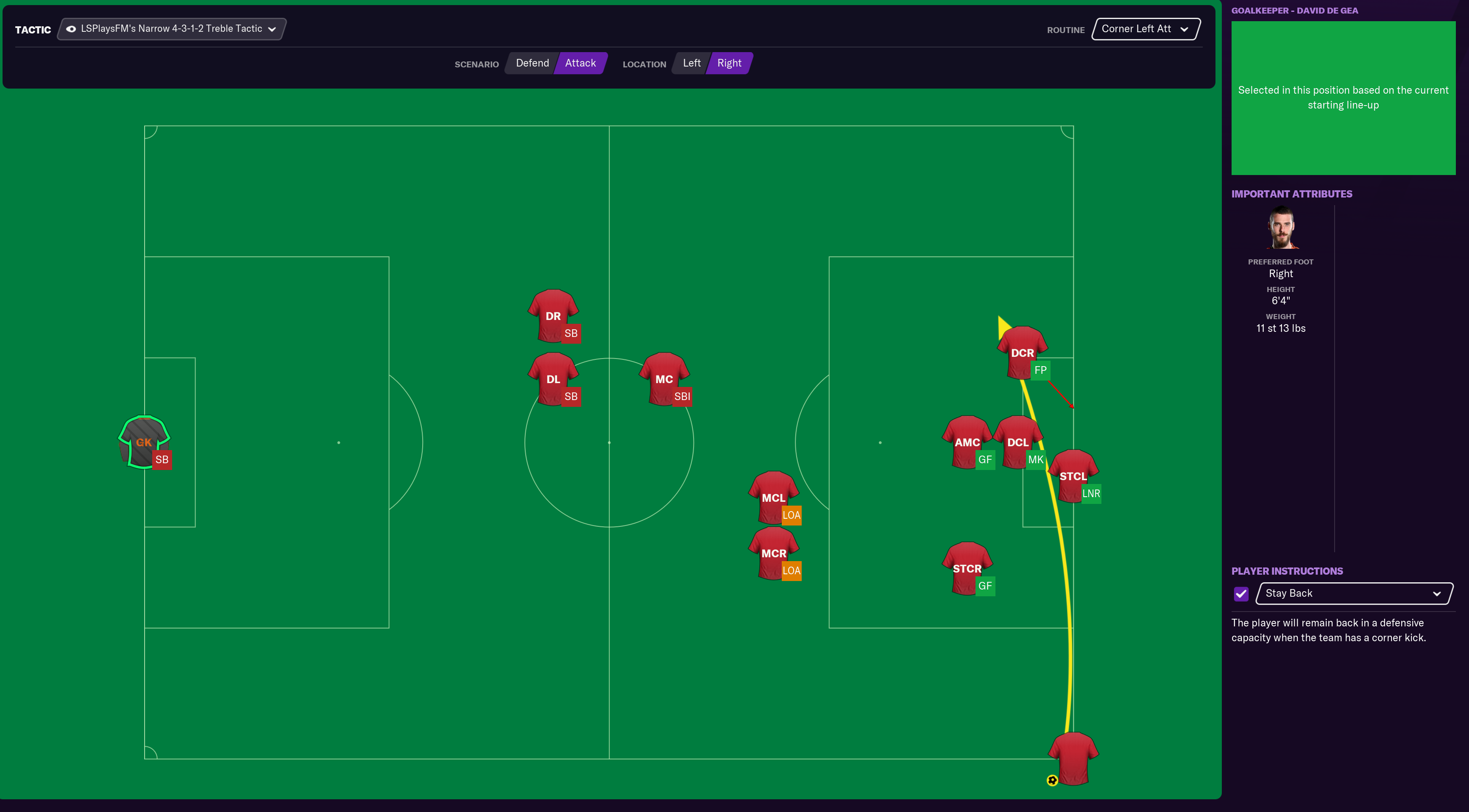 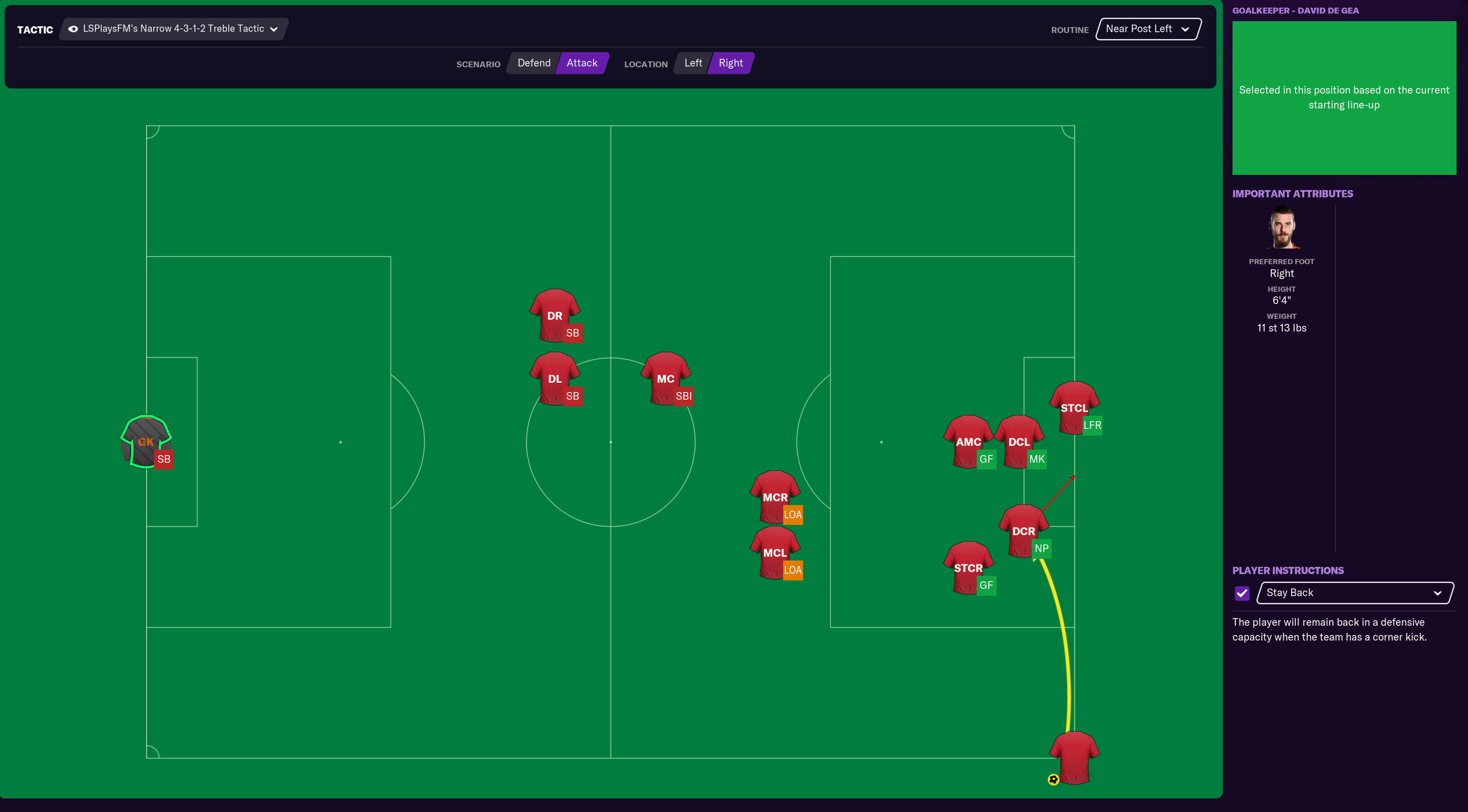 Also in addition to this, my training & opposition instructions are set to be handled by the Assistant. In terms of player instructions these are left to the defaults that each role provides the players with. I have not adapted these so this may be something you look at improving yourself when using the tactic.

Using this tactic at Manchester United they managed to finish comfortably as winners of the Premier League on a massive 98 points, almost beating the league record and hitting triple figures! They also finished up with 30 wins, 6 draws and only 2 defeats. In addition to this they also had the best attack and defence in the league with 108 goals scored and only 27 conceded in 38 games. On top of this United also won a European treble winning the Premier League, Champions League and FA Cup. The team even had the golden boot winner as well as the 2nd and 3rd spots in this as well with Rashford, Greenwood and Martial all dominating the stats boards. 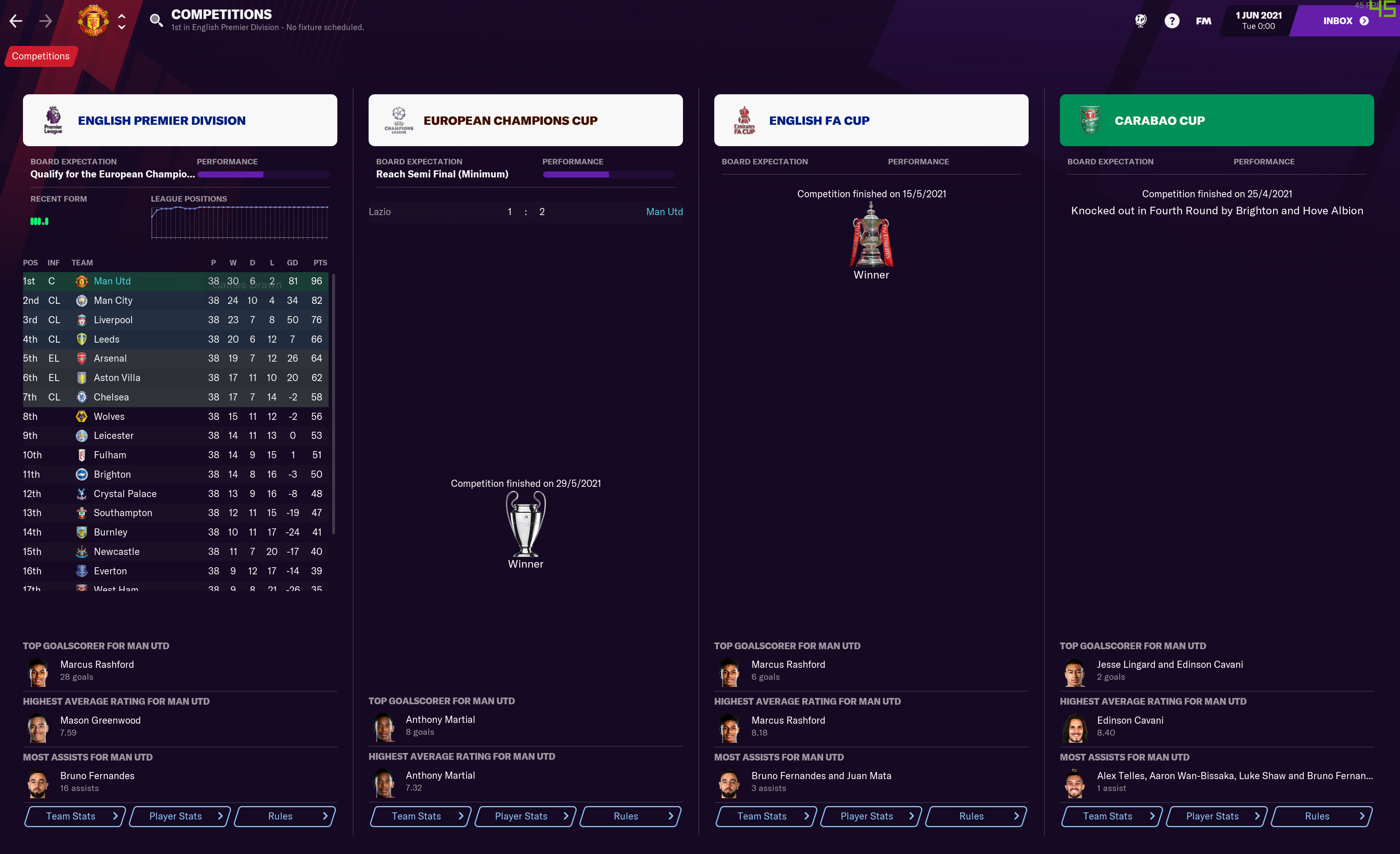 Below you'll find the analyst stats for United as well, they were the best offensively and one of the most impressive defensively too. 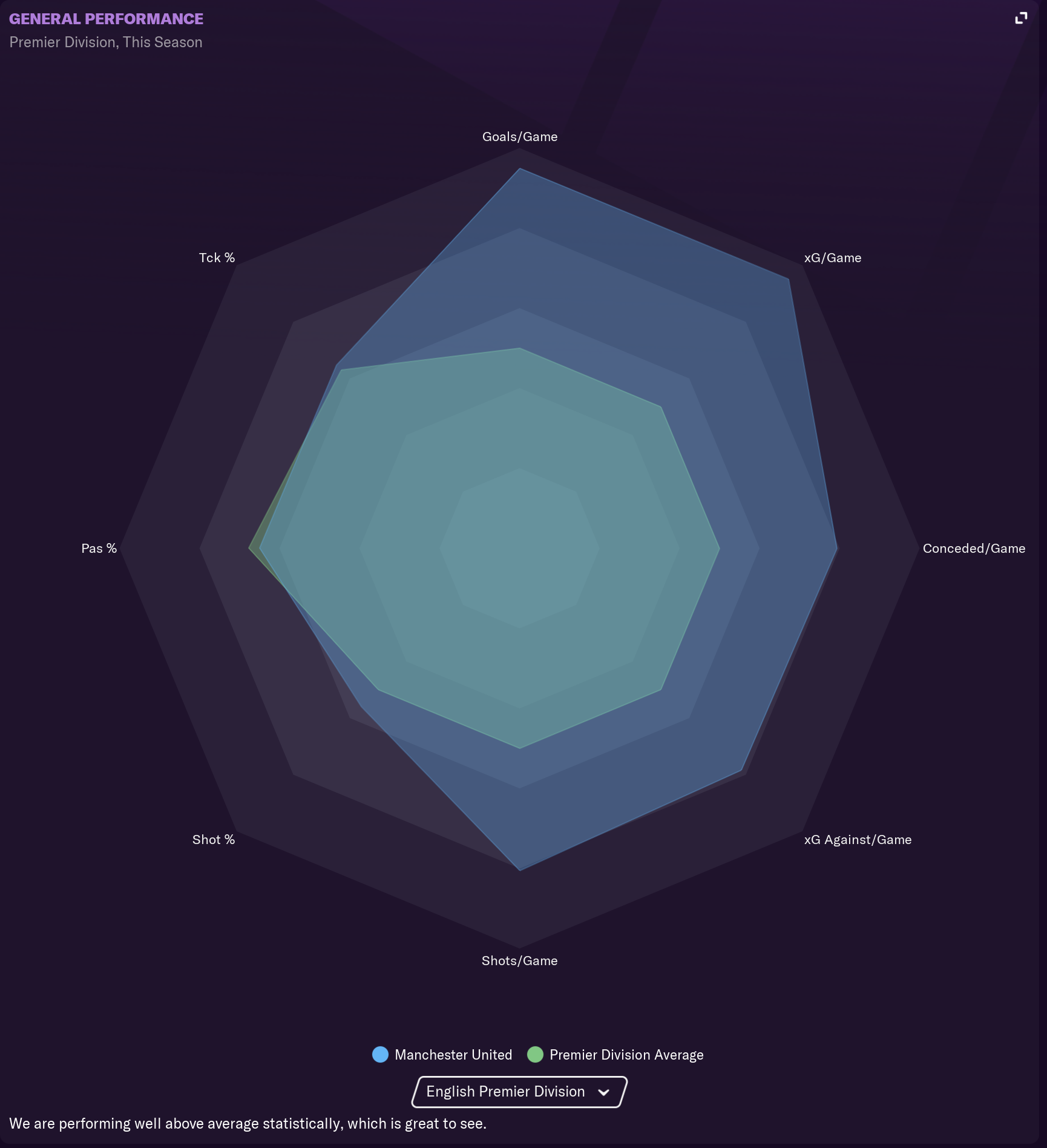 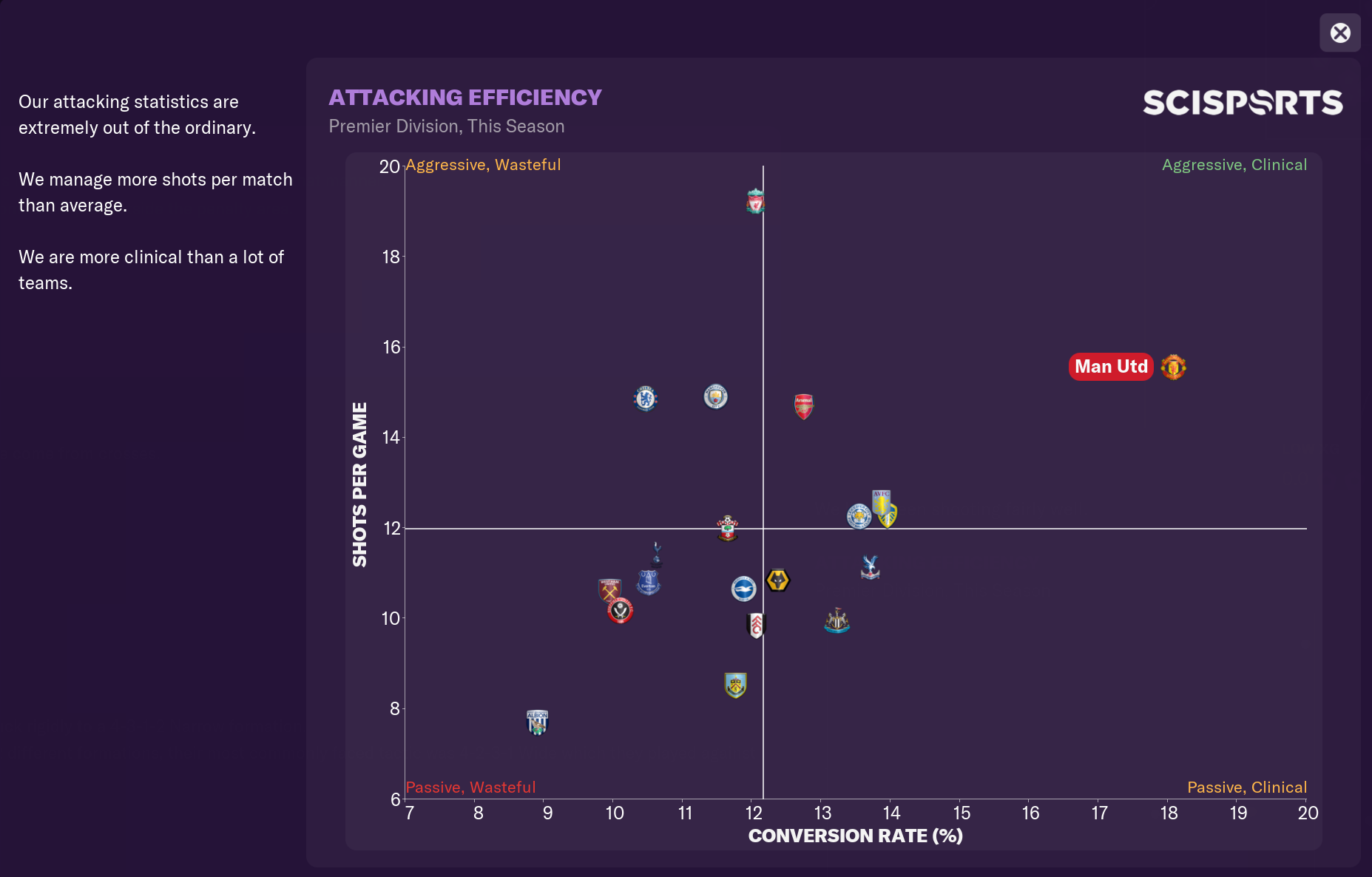 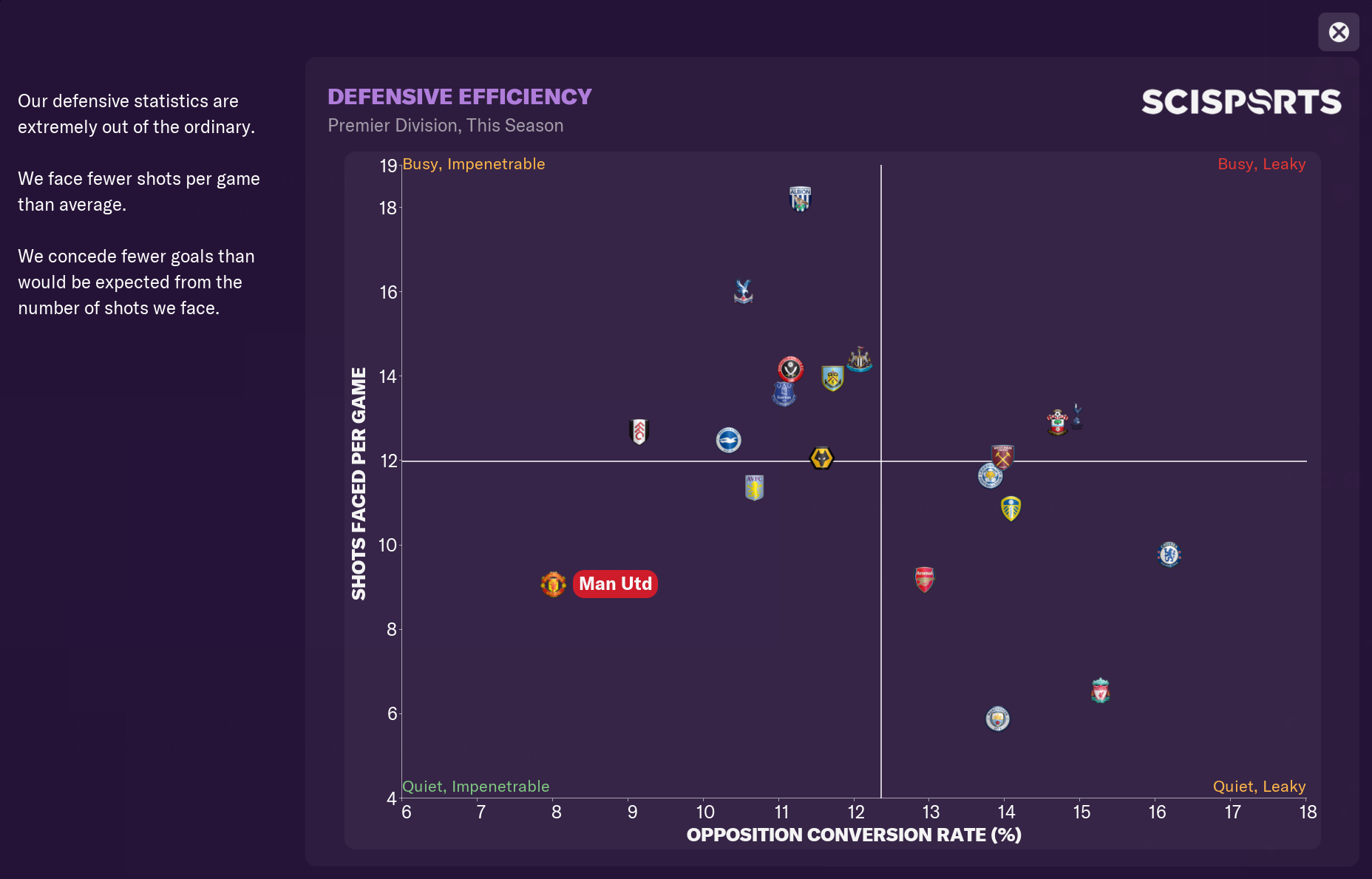 After the success with Manchester United, I also tested this with Everton and Fulham so we could get a test with differing levels of teams so we could see just how the tactic would fare with sides weaker than United. You can see how Everton mainly lined up below: 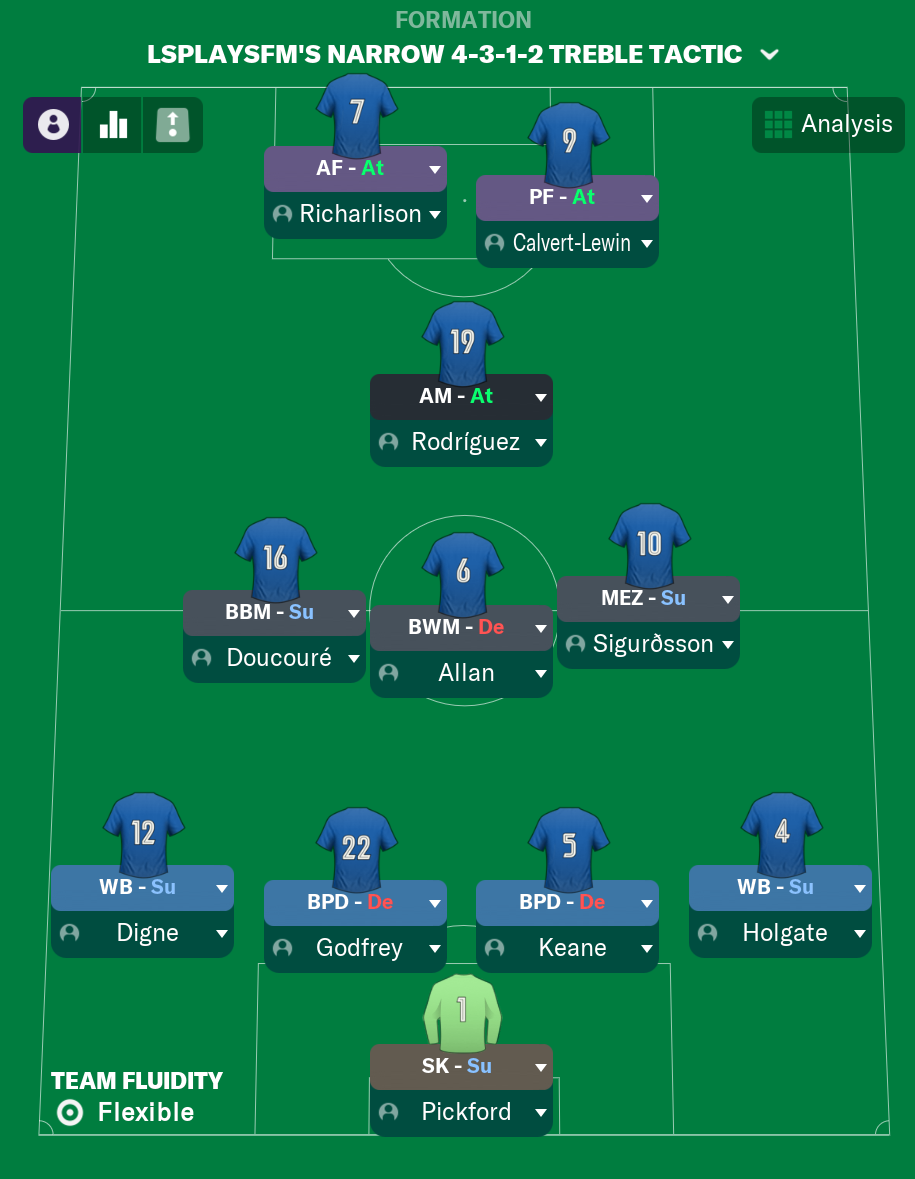 Using this tactic, Everton who were predicted only 9th finished far higher up in 5th getting Europa League football and also finished only 3 points off of Chelsea in 4th having achieve a massive 75 points! On top of that the team also won the FA Cup as well. Its wasn't just the squad though which performed well for Everton, but individually, Richarlison and Calvert Lewin had a very decent seasons up top scoring 23 and 20 league goals across the season for a combined total of 43 from them! You can see quite how Everton got on in their competitions and the League below: 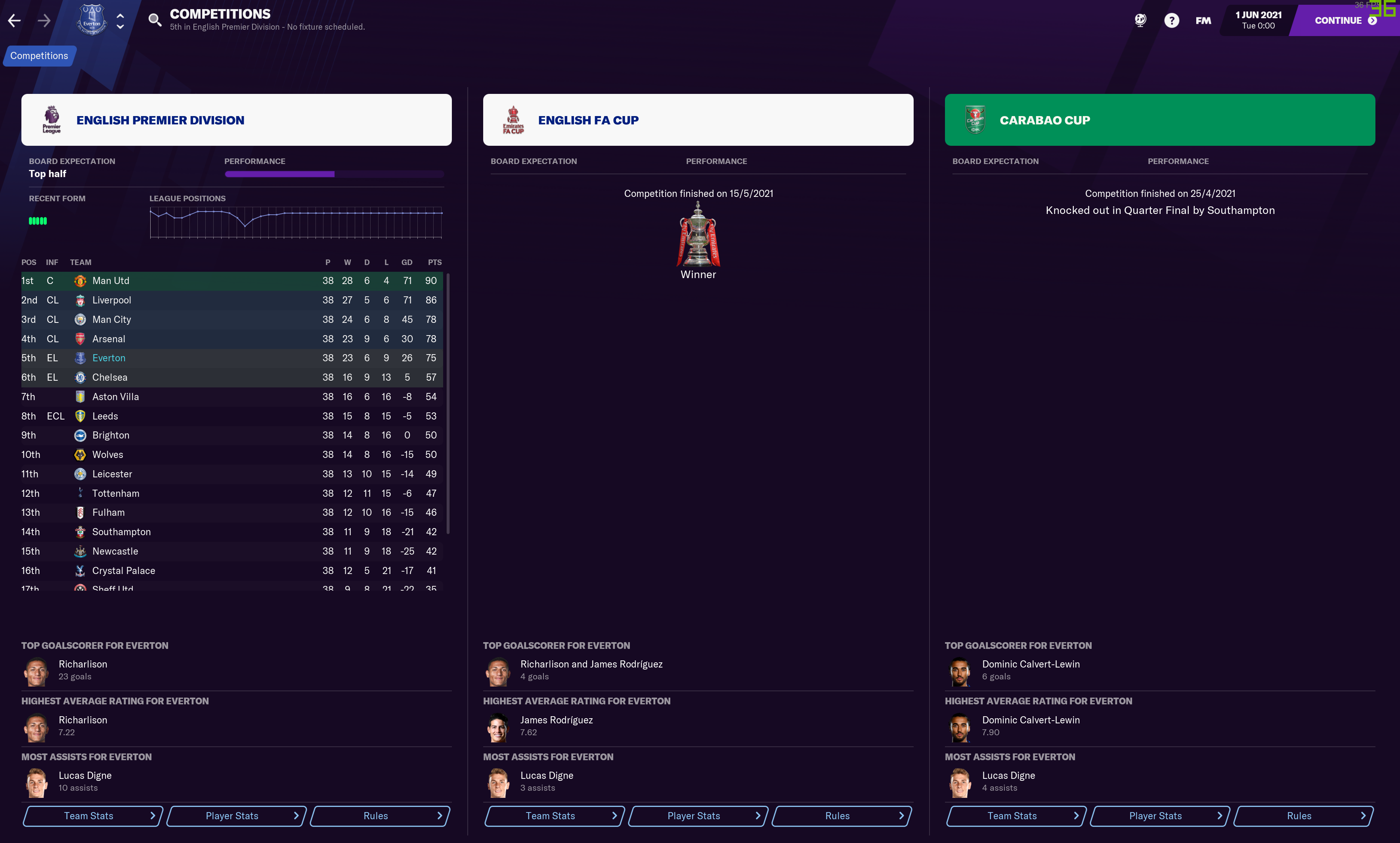 Finally after Manchester United and Everton's success we come to the final team in Fulham. A newly promoted side in the Prem and arguably one of the worst teams in the league. They were predicted only 18th, so were very much relegation candidates which was a big reason why I wanted to test them so we could see how a poorer side could fare with this tactic. Fulham's side would line up something along these lines when using the tactic. 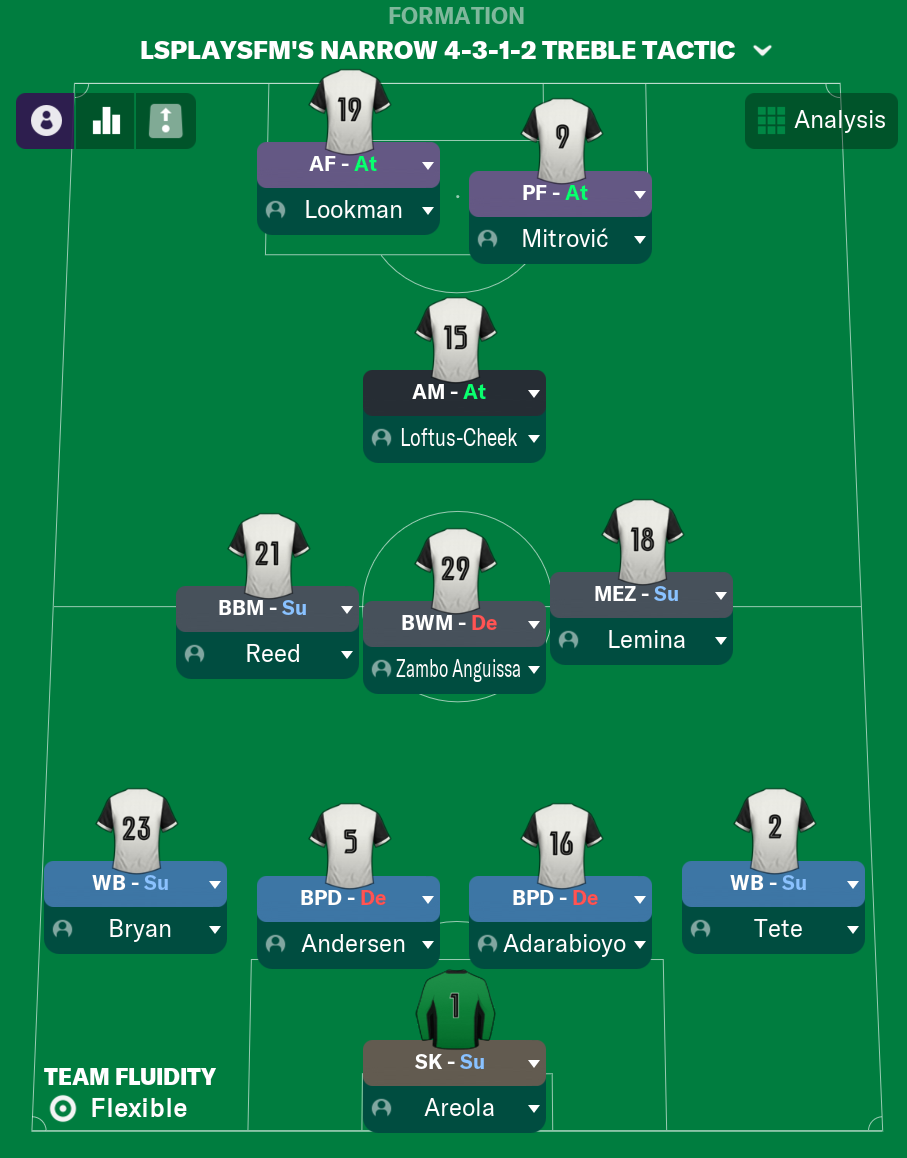 With this tactic, they absolutely smashed expectations, finishing up in 5th position in the league on 74 points, only 1 behind what Everton achieved and also only 1 point off of 4th position. They also had the 3rd highest goal scoring tally in the league as well! On top of that they also reached the EFL Cup Semi-Final and had the golden boot winner in Ademola Lookman with 24 goals which is just crazy for a side of Fulham's ability! You can see exactly how the side got on below: 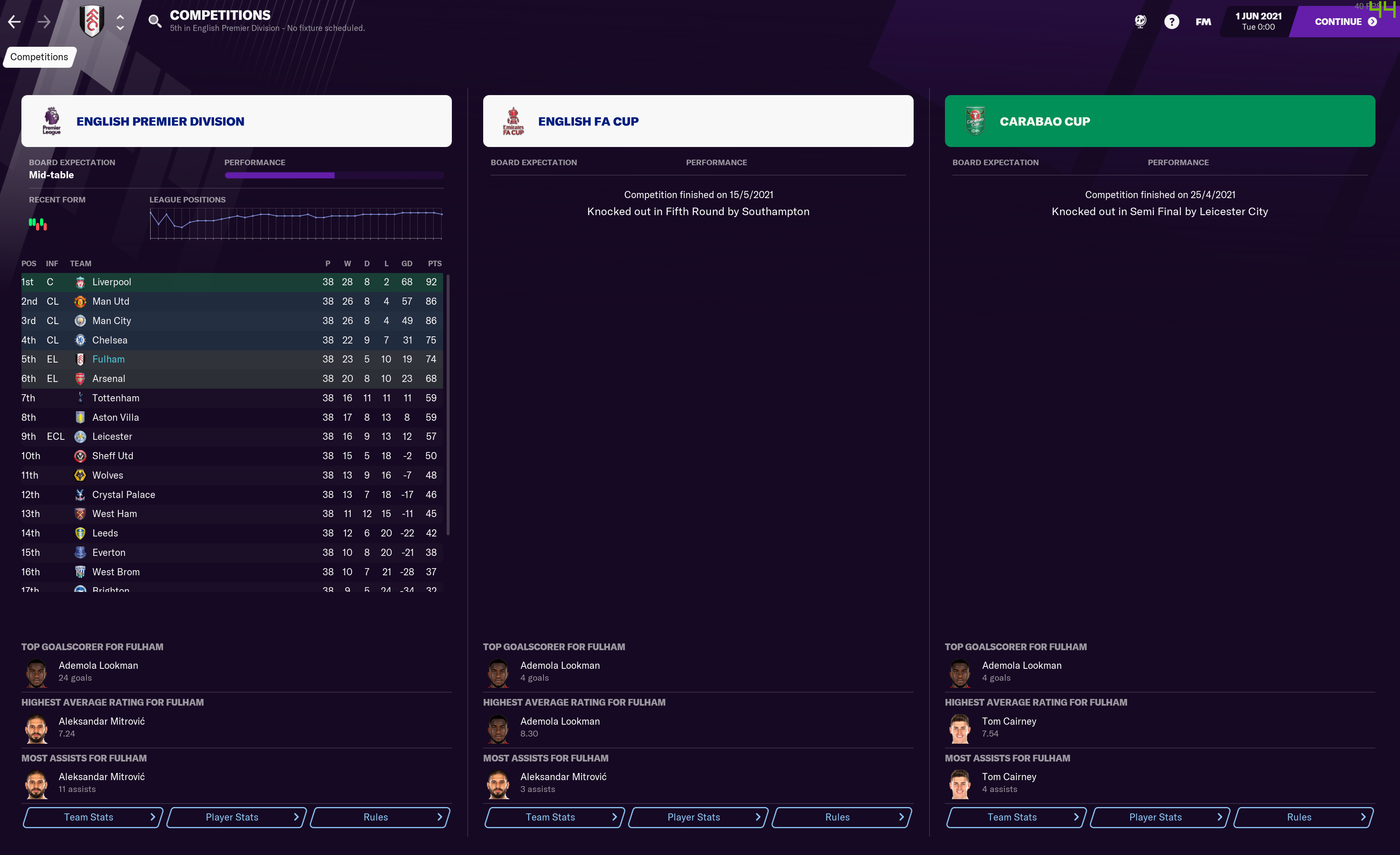 Also I do stream FM21 over on Twitch as well where currently I am managing Norwich City as we push on for Champions League glory. I normally stream every Tuesday, Thursday and Saturday, so if you'd like to come along, then just check out the link below.