-- General comments --
This is my first uploaded tactic ever, and the reason is simple: For the first time, I've managed to make my players play the actual way I wanted them to play.

Like many others, I've been inspired by Barcelona's high possession approach of the golden days '10-'11. Match engines of diverse FM editions have been tough on tactic creators with a possession-oriented mind. After testing and tweaks, I can finally present a tactic that covers all my personal needs:

Obviously, this tactic is not perfect. None is. It is highly NOT plug-and-play. The main reason is that the "roles" of the players on the pitch is not exactly what the "description" of their roles is. I had to change the roles and instructions so that the players actually acted the way I wanted on the field, even if the text wasn't pointing toward it. You then truly need to check your players stats since a "good" defender according to the game for this position may not be your actual best choice!

*** I will try to update this post with more and more infos as thing goes, if I see some interest! *** 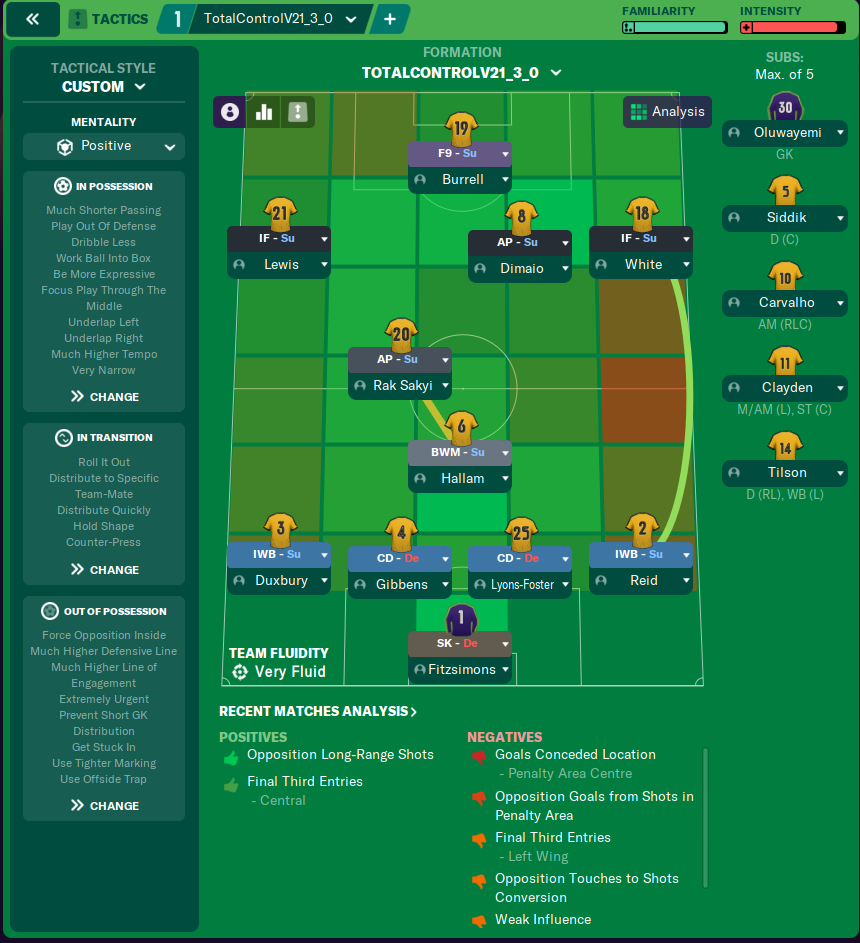 Screenshot: With Boston Utd. I tried the tactic with top-tier teams and mid-tier ones too with similar success. Always with the need to carefully pick your players!

-- Player Selection --
For player selection, as a rule of thumbs, you will ALWAYS need to have good stats (even for defenders!) for:
- First touch
- Decision
- Vision
- Off the ball
- Positioning

This is an extremely high-tempo tactic, where the players will need to think and act fast. Without those stats, expect mistakes. And if you make mistakes, just like any possession tactics, you will pay dearly. The actual numbers needed depend on your league level. Aim for those stats to be at least above average. You can deal with lower speed, which is usually a stat that boost the price of players.

Remember, the Match Engine provides a complex fast-paced and intricate decision making process for your team as a whole. Sometimes, an attribute not listed here (may it be high or low) can make a player unsuited for the tactic because it sligthly affects his split-second decision toward something you don't want for the tactic to work. My thoughts about this? Don't buy 100M$ players... get a couple of lower-priced guys and try them out. Or better yet, train them yourself. Team cohesion > Individual stats anyways.

Specifically:
SK-De: You want an agressive keeper with good communication. Since most of the opportunities from your opponents will come from breakouts and one-on-one, no need for him to actually be a good "shot stopper"! Good aerial reach may also help for corners and such, as usual.
Priority: Communication, Aerial Reach, One on Ones, Rushing out, Anticipation, Decision, First touch

CD-De: Your defenders are your last hope at killing the counter-attacks and also need to be able to recycle possession. They will be used in the passing game so they need not to panic and kick the ball far away. They also need to think fast since them losing possession is a 80% chance of getting scored against...
Priority: First Touch, Marking, Anticipation, Decision, Positioning, Pace, Jumping Reach (for set pieces)

IWB-Su: Not your typical lateral defender. They will be sitting near the center of the pitch and become passing options during attacking movements. They are amongst the prime creators because, unlike the APs, they are usually marked with less rigor. You need smart players but again, other managers in the game will value fast lateral defenders almost exclusively, so you should be able to get one that is smart and just somewhat fast... or train one!
Priority: First touch, Marking, Anticipation, Decision, Off the Ball, Positioning, Acceleration, Pace

BWM-Su: This guy does everything. He'll receive a lot of passes, especially when your opponent starts parking the bus. Forward passes will become trickier, so the team will look to go through him, with some one-twos, to unlock spaces. With his role, he'll also be on the lookout and jump on the adversary whenever possession is lost. Get yourself an all-star here and he'll solidify the tactic.
Priority: First touch, Marking, Agression, Anticipation, Concentration, Decision, Off the Ball, Positioning, Work rate, Acceleration, Strength, (Long Shots)*
* The long shot attribute shouldn't be a priority, but it's a good-to-have. The reason is that no one should actively try to shoot from afar, but when the opponent starts parking the bus, your players may have no choice at some point. And from what I've seen, the one with the best opportunities to do a long shot with an actual good line-of-sight to the goal is your BWM. Mine scores a screamer every other game and it helps when my opponent tries to frustrate me

AP-Su (In CM position): One of the toughest position to find someone suitable. This AP will be surrounded, always, by adversaries and teammates alike. He is the one who needs the best Vision and Decision making skills since he'll have sooooo many options and dangers around him. If he makes the right decision, you'll win. If he doesn't, your team will be pressured into mistakes more often, and this tactic is not forgiving

AP-Su (In AMC position): This guy will move around the other AP to give him some passes opportunities. So a little more movement is needed from him (everyone covers a lot of ground with this high-intensity tactic, but this guy needs his movements to be efficient for him to have actual value in the setup). He will move and do some one-twos with his partner in MC position. He needs to act fast, again, to avoid loss of possession.
Priority: First touch, Decisions, Off the Ball, Vision, Work Rate, Acceleration, Agility

IF-Su: They will help with the possession, just like everyone. But you also need them to understand when the opportunity for a goal is unfolding. Someone needs to score at some point and your IFs will most probably be your best bet!
Priority: First touch, Finishing, Composure, Decision, Flair, Off the Ball, Vision, Acceleration, Agility

F9-Su: This is by far the most complex role out there. You WILL want to try different players and see which one does what you want. The balance of selfishness and teamwork is hard to get. Some "better" players may not be the best here... You really need someone who'll drop in the middle to help with possession and surprisingly gets forward for no reason at some point to unsettle the defensive line. This guy needs to be unpredictable for the adversary... which also kind of means I'm not sure what is the recipe for success! Here is what my best options had in common over my tests:
Priority: First touch, Finishing, Dribbling, Composure, Flair, Off the Ball, Acceleration, Agility

All players: Finally, this is a high-tempo tactic... which means you need all your players to have good stamina. An other thing I can tell, is that good roster depth is important. Even with good stamina, you will need to rotate your selection once in a while. That and to deal with suspensions because unfortunately you will accumulate a lot of yellow cards (haven't had much reds though, so that's good).

-- Tactical concept --
The tactic will provide extreme possession in front of the opponent box, with fast short passes to keep possession without risking being closed-in. The lateral players will come inside on attacking movement while go wide on defense. While this may seem counter-intuitive, the best counterattacks need to go through non-used space to be fully effective, so widening up when you lose possession actually translates in faster pression on the counter-attacking opponent, at a point where a fine-tuned team will actually get to the ball before the opponent get to it, almost always.
It is well known that possession for possession sake is a bad and fruitless approach. The "attacking" mentality helps trying to actually create chances and get some through balls and shots in when the opportunity is decent!

-- How to tweak the tactic during the game --
At the start of the season, opponents may try to attack against you, which will lead to easy wins. As soon as they realize you have a dangerous approach, they will most probably park the bus and hope for a break. With this tactic, one break can kill your game as they will have a lot of space behind your defenders. You need to monitor how you lose the ball, even at the FIRST highlight where you see a counter-attack. They will have one or two of those in the game... so correct whatever is needed.
If the problem is that you players took too much time with ball at their feet and got tackled, you can actually abuse and get up to "very attacking" mentality. You may lose the ball more, but for goal kicks, instead of counter attacks. Goal kicks are not as dangerous since you will be regrouped and get possession back more easily.
If the problem is more "long passes" intercepted wastefully, bring down the mentality to "positive" or even "balanced".
Other than that, just be alert and tweak individual instructions according to the problem you're witnessing!

Where does the magic happen?

OI: Do not let your AssMan do it. I leave it all blank, but sometimes push a little "tackle harder" or "press more" on the opponent fastest striker if he is breaking my line too easily. Other than that, OI simply disrupt the general idea of being "in charge" of the game
Training: I let my AssMan do the General Training. For individual training, I do positional training for where I will use the player, with those roles:
SK - A
BPD - D
IWB - S
BWM - S
DLP - S
IF - S
AP - S
F9 - A
As you can see, some positions are "trained" not with the role they are used in for the tactic. This is because the role has been tweaked for the actual behavior to correspond to my team play philosophy, but the attributes I want to work on are not necessarily the ones highlighted for the player role.

-- Your input --
Please feel free to try it out and comment with your personal tweaks! This is what I call wonderful football. It is not a "game engine breaking tactic" and needs intelligent input not to fall into the "frustrating high-possession yet losing to a 21:1 ratio of shots" category of tactics