Download
Overview Discussion
Blue 3.0 RPM (aka Blue DM) is a high intensity tactic based on the successful Blue 3.0 from FM21.

When in possession, inverted wing-backs cut inside to become midfielders while shadow striker becomes a third striker. Deep lying playmaker is one of the most important players, holding position to cover defensively and offer a short option for passing. Goals are scored from inside the box and are distributed evenly between advanced forwards and shadow striker, with assists distributed evenly between middle and flanks. 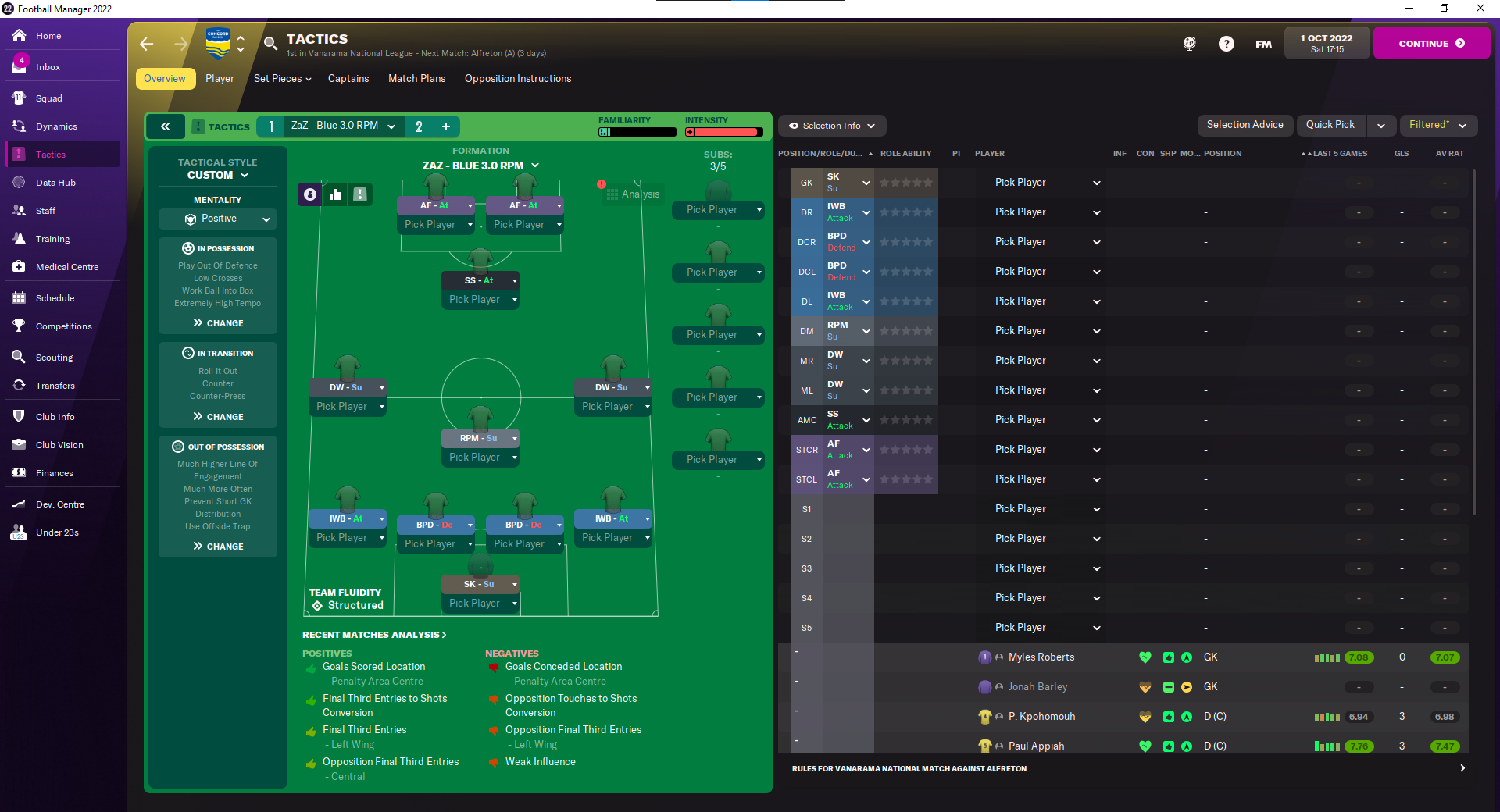 For people in consoles, below are the screenshots of team and player instructions.

My set pieces are a tweak from earlier versions of Blue, Void from Cyborg, Motion from Egraam and Phoenix from Magician. More information here: https://fm-arena.com/thread/967-set-pieces/. (I will try to improve set pieces eventually, but I keep pushing it farther ahead in the schedule.)

For additional focus, goalkeepers train reactions while all other players train quickness.

I have also created a rating file for Genie Scout based on the FM-Arena table: https://drive.google.com/file/d/1_L6IzjkGNACQtxuIGrliLO6rEcvtB0Ti/view.
Same foot as side for BPD, DW and AF. It doesn't matter much for other positions.
Role ability, or the stars showing how good a player is in his role, can be safely ignored. It's just cosmetic, showing the opinion of your assistant manager based on current ability and the role attributes. It's always gonna be low for IWB using the same foot as side, or DW with low defending attributes, despite making no difference in performance.

Remember, the important attributes are not the ones highlighted in a player role, but those that actually impact performance as you can see in the FM-Arena table for attributes ratings.
Empty. Feel free to change if you know what you are doing, but don't listen to your assistant manager.
To be successful in football manager, you need to manage your team's playing time, which affects happiness, match sharpness, fatigue (can only be seen with sports scientist) and condition. Happiness and sharpness are managed by making sure each player is getting enough minutes, while fatigue and condition are managed by avoiding giving more minutes per week than they should play. Note that you can use friendlies and reserve matches to keep players sharp, but those matches have no effect on happiness.

My suggestion to manage the squad properly is to add two columns to selection info: "fitness and injuries > fatigue" and "stats (general) > general > games missed in a row". You can do that by right clicking any column name in squad screen, e.g., name, position, and selecting insert column. Make sure you don't use players with high fatigue and don't let any player reach too many games missed in a row (between 3 to 5 depending on your squad size).

After matches in tight weeks, you can rest the most tired players from training so they can recover condition to the next match. To do so, select any players you want to rest, then right click, training > rest > 1 or 2 days. That should be enough to have your most important players in shape for big matches.

Finally, you also need to manage complacency and anxiety. That is usually done through team talks and shouts. The effect is based on players hidden status and match odds, but some talks and shouts are usually more positive than others. For example, praising a winning team with shouts usually gives positive response, as well as encouraging your team when not winning (losing or tie).

For team talk, I usually prefer to relieve pressure telling them to play their natural game, then tell them individually that I have faith on them. At half time, I praise them if winning by at least two goals, otherwise I tell them I'm not happy. After match, I praise them for victories, tell them I'm unhappy when we don't win and sometimes warn against complacenty after big wins. Keep in mind that you should be a little bit lighter with your team against stronger opponents.
My testing league is set to include only english competitions and english teams. All players from English Premier League and Sky Bet Championship are set to have maximum consistency, important matches and natural fitness, while having minimum injury proneness. The editor data can be downloaded here: https://drive.google.com/file/d/1Oe-HGln9GRyVPJJpC8oQydz75YX5PIxo/view?usp=sharing.

There are two different group of teams being tested, with each run using two teams from Premier League and two from Sky Bet Championship, simultaneously. Teams were picked by preview odds, having the best and worst odds of each league, as well as best and worst from middle ten odds. The teams from Premier League are Manchester City, Arsenal, Southampton and Norwich, and the teams from Sky Bet Championship are Bournemouth, Blackburn, Barnsley and Derby.

Tactics are tested in holiday mode, three times for each group of teams, with results ranked between all tactics tested. The tactics with smallest sum of ranks is considered the best. For example, below are the results of Blue 3.0, Blue DM and Orange 2CM, with selected cell as the best result.