10 things you need to know about Raheem Sterling.

For most pupils who will be going back to school after the holidays, Raheem Sterling with have the most playground chatter. The young Liverpool startlet has been all over the news following his place in Liverpool's Uefa Cup squad, and his rich vain of form for the u18's side.

“So what did you get up to while you were off?” goes the bog standard question. “Well, er, let me think. On Monday, I played at Anfield for Liverpool’s youth team. We won 9-0 and I scored five goals. Then on Tuesday, I was named in Liverpool’s first team squad for the trip to Prague alongside the likes of Pepe Reina, Jamie Carragher, Raul Meireles and Dirk Kuyt. On Wednesday we flew out to the Czech Republic and trained at the Generali Stadium. I didn’t get a game on Thursday but I got to watch Kenny Dalglish’s first ever European game as Liverpool manager in person. Oh, I almost forgot, on Saturday I played for the under-18s, we beat Stoke City 4-1 and I scored twice.”​ 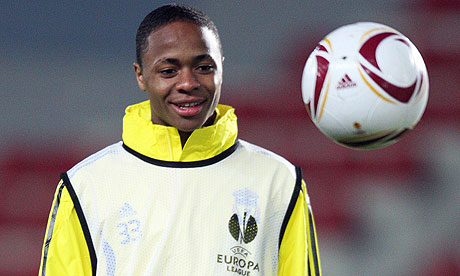 
At just 16 years and 79 days he would become the Reds' youngest-ever first team player.​


So just who is this precocious talent? Read on...​


3) A lightning-quick striker with good all-round ability, he has already been compared to Theo Walcott, while some coaches rate him as highly as Wayne Rooney at the same age.​


4) QPR's head of development Steve Gallen said of his young protege: "He has loads of natural ability. This boy can pass, shoot, head it, score goals, tackle, defend, anything." Have a look at his frankly unbelievable tekkers here​


5) When he was just 14, Sterling was already a regular in QPR's under-18 side and even scored on his debut for the team.​


6) He has also already played for England, having made his debut for the Under-16 side in 2009 in the Sky Sports Victory Shield against Northern Ireland at Chester City's Deva Stadium. He came on late in the first half and provided the assist for Matthias Fanimo to score England's second in a 2-0 win.​


7) Before Liverpool swooped for Sterling, a host of other Premier League sides were jostling for his signature including Manchester City, Manchester United, Chelsea and Fulham. But it was the Reds who got there first, signing him for an initial £600,000 in early 2010 after the club wooed him by taking him and his agent as VIP guests at Anfield for a Liverpool vs Manchester United match.​


8) He made a great start to his Anfield career by scoring on his debut for the Under 18s against city rivals Everton in a thrilling game. Liverpool's youngsters came from two down to eventually beat the Blues 4-3.​


9) His academy boss was quick to praise the youngster. "I was pleased with Raheem's contribution and that he scored on his debut,' said Rodolfo Borrell, the former Barcelona coach. "He is quick and skilful but still only young. He can improve tactically and has a long way to go, but he is a great signing for this football club." Here are his highlights so far...​


10) Sterling has earned his place in the first team squad for the Europa League tie against Sparta Prague, after impressing Reds boss Kenny Dalglish in a 9-0 win over Southend in the FA Youth Cup on Monday, during which he grabbed five goals. Check out this video to see him wipe out the Seasiders...​

its nice to know and thanks for sharing those videos..
D

Harlesden is in North West London.. stupid journalists and their poor geographical skills..

I think he looks a great player for the future.
J

scored twice today too.... as did Connor Coady...
J

10 things you need to know about Raheem Sterling

#1. How to spell his name correctly (it's Sterling not Stirling)

Seriously though he does look like a great talent, and it is nice to see some info and videos on him as his age can make this hard to come by.
B

Anyway, yeah, still, he needs to be on FM though :S (not counting updates)
A

Looks like a special talent, scored on his under 18 debut at just 14 years old, pretty impressive.


Shame you can't watch that last video anymore because of it being blocked due to copyright :S
O

He looks like hes going to be a good player, but I feel the media and hype around him might overshadow anything he does. A bit like Walcott when he hit the scene at Southampton. He scored 5 was it in the youth cup? A good performance, but against other youth players, not first teamers. **** be a player for the future, but hopefully it wont turn out like Freddie Adu. Cautious optimism I think is the way forward.
S

Liverpool stole him from us! nothing we could do. hate it when the big teams take all of the lower divisions prospects
A

Seen him play, great kid and a beast on the pitch.
A

sidhoops1 said:
Liverpool stole him from us! nothing we could do. hate it when the big teams take all of the lower divisions prospects
Click to expand...

sidhoops1 said:
Liverpool stole him from us! nothing we could do. hate it when the big teams take all of the lower divisions prospects
Click to expand...

Umm, no. He loves QPR but wanted to leave as soon as a Premier League team came in for him.

It happened to be between Liverpool, Spurs or Arsenal. He chose Liverpool because they offered him the best education deal. They offered him a place in one of their schools, and he has a clause in his youth contract that he must play at least 15 games a season and be called up to at least 4 squads a year (inc pre-season).

If I'm right he's been in 3 squads already. He chose for footballing reasons, but if you ask him yourself he still loves QPR to this day.
L

Liverpools team in 5 years, if it lives up to expectations, will make sure that Manchester United or Chelsea won't be grabbing titles anymore.
B

That's just what happens to younger players in the lower leagues, but you have to admit moving to the Prem? There's nothing higher than that when you're a youngster.

We had it with Huddlestone who was quality for us, but Spurs came knocking at the door.

Liverpool managed to get Sterling due to educational reasons, and they also took Raheem and his agent on a V.I.P day to watch Liverpool, which added all together was enough to persuade him, and tbh, can you really blame him?
M

He is a class act, will no doubt develop into a great player!