AVB on the ropes

I sat watching the highlights over and over again, making notes then ripping them up again. The highlights of course was the Bayer Leverkusen match. The time was 12.48am i needed sleep.After yet another disappointing result, i knew and thought to myself that things can't carry on like this or i'll be out of a job, my system will take time to implement and i know if given time Chelsea will benefit in the long-term. A disappointing 2-1 loss left us 1 game away from the Europa League, the 1st time Chelsea have failed to qualify for the Champions League group stage, it will all come down to a crunch match against Valencia at the bridge in 2 weeks time. It wasn't that we played poorly, individual areas particularly on the 1st goal but the 2nd we conceded was the bitter blow that we did not want or need considering our recent poor run of form. As i turned on sky sports news, Valencia had demolished Genk 7-0 filtered through, all i thought was wow! Do i need a change of formation? Do i need to ditch the high line? So many questions but i had to get this right before the clash with Valencia

2nd in our Champions League group which on our paper when you look at the squad we should win it quite comfortably. 5th in the Premier League, it just simply isn't good enough for a club the size of Chelsea​

How could i turn things around?
​

Please Note:
I will pretend to be AVB in this story after the shocking start to the season as you will follow my attempts to turn Chelsea's season around.

The Premier League table above is the same in-game even to goals for and against using fmrte. After you have edited the table you will need to go on holiday, and by the following weekend the points and table will have updated​
Last edited: Nov 24, 2011
P

Will Be Following
S

cheers mate, next update up in the next couple of hours
M 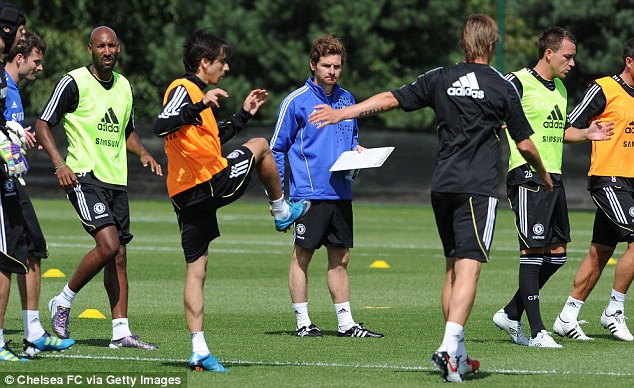 i turned into the car park at Cobham believing that i was the right man for the job. I had spent my early coaching career with 2 of the greatest managers ever in world football, the late Sir Bobby Robson at Ipswich who taught me everything i know and along added with my natural ability, this made me believe i was the perfect man for this job, despite a below par start to the season.

i informed the players on what i wanted them to do - the defense were practicing playing a high line and playing more as a unit, i sent the midfield to practice passing and learn to control the midfield 2 things that we really struggled to do last night. Then the strikers, they practiced beating a defender and finishing. Then tommorrow they will get to grips with the change of 4-3-3 to 4-3-1-2- with Mata playing as a attacking midfielder, he's been too ineffectual out wide, Juan is the most creative player in this very talented squad so we have to build a tactic that suits the little magician.

Looks like a great story definately following as I support Chelsea. Good luck

Enjoyed reading so far... Keep it up!
S

cheers mate, i hope this story appeals to chelsea fans and i hope u carry on to follow
S

Chokopop said:
Enjoyed reading so far... Keep it up!
Click to expand...

appreciate it a lot mate
S

In training today, we started focusing on my new 4-3-1-2 formation in preparation for the Wolves game tommorrow, I called them in for a team meeting - saying that we would be changing formation to turn our season around and guarantee champions league qualification for next year. Juan seemed to be very keen on the idea as did several members of the squad, I told players to be honest and they were very open. I thought this was a very productive meeting with players saying that a change of formation was necessary and that many of the players felt that the Premier League was out of reach this season and the Champions League should be our priority for this season..

Next it was time to draw the tactics on the whiteboard, and name the team starting tommorrow:
View attachment 205713​


As soon as I had finished drawing the tactics on the board.There was uproar from the corner where Nicolas said “boss, why am I not in the starting 11?” I was shocked by this outburst as Nico is normally one of the quieter members of the group, I replied “Nico, if your not happy here at Chelsea feel free to leave, you are 32 years old and quite frankly there are better strikers here”. He was shocked and shouted “hey, boss there’s no need to embarrass me,” I lost my temper and said “Nico, get out go train with the reserves, you will never be playing for me again, now get out!”


I didn’t mean to come out with such an outburst, but I hate it when people question me particularly when I’m their boss, I suppose the pressure of managing a club the size of Chelsea has finally gotten to me.
Last edited: Nov 26, 2011
S 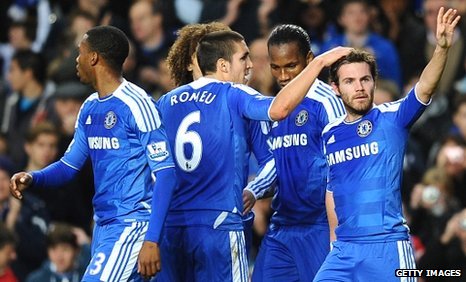 
I was thrilled with the result in what really was a must win game for some confidence to be restored back into the players. We dominated the game but we went behind unluckily. But some fantastic passing flowing moves led to a positive result. The win lifted us up to 4th place after Newcastle lost to Man Utd 3-1. My 4-3-1-2 formation just seemed to click with the players, Juan was very influential creating the 1st and 2nd as well as scoring the 3rd goal, i really could not ask much more from the little Spaniard. The only disappointment was that we again failed to keep a clean sheet, with Wolves all respect to them catching Terry and Ivanovic on their heels. We are looking forward to the next game after this positive result, there is a new found confidence among the group.
Last edited: Nov 27, 2011
C The week following the Wolves result i took more of a back seat in training, instead i sat watching videos of the upcoming opposition and started reading through scout and coaching files on the current performence and possible additions to the squad for January. A thought occured in my mind that if i got some players signed sealed and delivered and set to come in June it may help me establish a powerbase in the squad. However that quickly faded, this club is bigger than any individual.


I called Nicolas into my office, i wanted to apologise to Nico after my outburst last week on him. And when i called them into my office i noticed how fearful Nicolas looked as if he thought he was in serious trouble and this was a concern.


'Whats up Nico?'
'nothing boss'
'you just seemed nervous, i know it is odd to be called in off the training ground by the boss mid training. But I just wanted to apologize to you after my outburst on you last week, you have every right not to accept it but I just want to let you know I’m sorry.”
'yes boss, I accept your apology. While I have this chance, I would just like to say that I have overstayed my time at Chelsea and would like to leave in January, to finish my career at a club where I am playing every week”
“I’m sorry to hear that Nico but I'll try find you a club.”


He left and i wasn’t overly confident but i think it will have definitely helped Nicolas out and I hope he enjoys his last few months at the club.​
S

I Stepped out at Stamford Bridge knowing how huge this game was, eventhough it was the Carling cup (where I made 8 changes from the Wolvesgame). I was determined to get revenge on Liverpool. Moreimportantly this was a very winnable competition – which if we winwould ease the pressure on me. I heard obscene chants coming from theLiverpool end, some all in good fun, some too hard to hear. I lookedup to Mr Abramovich who had just sat down , we had a rare smile thenmy mind completley switched to the game.
Ihad been thinking all week how huge this game was i kept thinkingwhether to try and impose ourselves on the game or drop anotherplayer into a holding position? As i sat in the dugout looking atKenny Dalglish, a man who seemed untouchable, my team talk was goingover and over in my head.

'Goout there and dominate this match, put your head where other playerswouldn't put their feet. Show everyone how much you want this and howmuch you want to prove how good a players you are. Let everyone seethat this is a Chelsea team of old and don't have any fear in youreyes. Pass and move Pass and move and lets go out and get revenge onLiverpool'

Afantastic, fantastic performance to score in the 1st minute then come back and regain the lead is true testiment to the quallity and passion of the lads. Quallitydoesnt win everything you need passion and drive and thats what myboys are beginning to show.
Last edited: Nov 29, 2011
C

Great result against Liverpool with a very weakened team. Apart of you must of thought you had no chance having to start the likes of Ferreira, Bertrand, Josh, Romeu etc but your team did great well done
You must log in or register to reply here.
Share:
Facebook Twitter Reddit Pinterest Tumblr WhatsApp Email Link
Top