quickzombie said:
I'd started trying v666 again after struggling with v3. What did you end up doing with the throw ins/tweaks? I personally just set to mixed but feel I could be getting more from throw ins. Thanks
Click to expand...

I still use long throw ins as takers with high long throws attribute and specific player trait (long flat bullet throw) might still create some chances. But yeah they've been nerfed quite a bit.
Q

what works with this tactic for big teams? thanks
K

you mean as a big team or against big teams? Not that it makes much difference for me as I never change anything

. The key imo is always squad building i.e. having right players for every role esp MEZ, AM and SS. I can describe the type of players I use for every position if you want?
Last edited: May 8, 2021
Reactions: josema
Q

Sorry my bad I did mean against big teams which is where I struggle a little. Tried dropping mentality but it seems to lose more than it gains against the bigger sides. Any assistance would be great as this is one of my favorite tactics this year? Just one last question is it still the tweaked 666 you posted a while back you use? Thanks
K

quickzombie said:
Sorry my bad I did mean against big teams which is where I struggle a little. Tried dropping mentality but it seems to lose more than it gains against the bigger sides. Any assistance would be great as this is one of my favorite tactics this year? Just one last question is it still the tweaked 666 you posted a while back you use? Thanks
Click to expand...

Yeah I still use the same tweaked v666. As I said I never change anything tactically, though against much stronger teams I prefer using more defensive players at DLP and MEZ (good tackling, positioning, work rate etc) to increase chances of winning ball back and counter quickly (pacey AM and SS are always a must). In bigger leagues like EPL you should soon have the resources to address key positions (e.g. Marcus Edwards and David Brooks

) and immediately challenge top clubs. Of course sometimes stronger teams might still thrash you but all in all I have massively overachieved using this tactic. Below my latest CL/EL run with finnish club SJK - beat some good teams though FC Midtjylland and Sassuolo were too much for us

who should take corner guys ? And which version is better for big teams ?

Is this still insane? also OP you should have this tested over on fm-arena
F

is anyone still using it?

Hey Guy's which version is the Latest Version ?
G

So I decided to have 1 last swangsong with FM21 before FM22 releases.

New game with Bournemouth in the winter update.
Played around with a few tactics, nothing would stick.

Went back to the strikerless and fearless v370 and we won the championship in season 1....just, although we were playing catchup from other tactics failing to work. Semi final knockouts in the League Cup (Man C) and FA Cup (Man U) to cap a great season.
Thought I couldn't top that. Totally wrong. We won the premiership in our first season back in the top flight! This tactic has still got it and I very much hope I can import it into FM22 and it keeps on working!
We made a few astute signings in the premiership but didn't spend over the top for players. 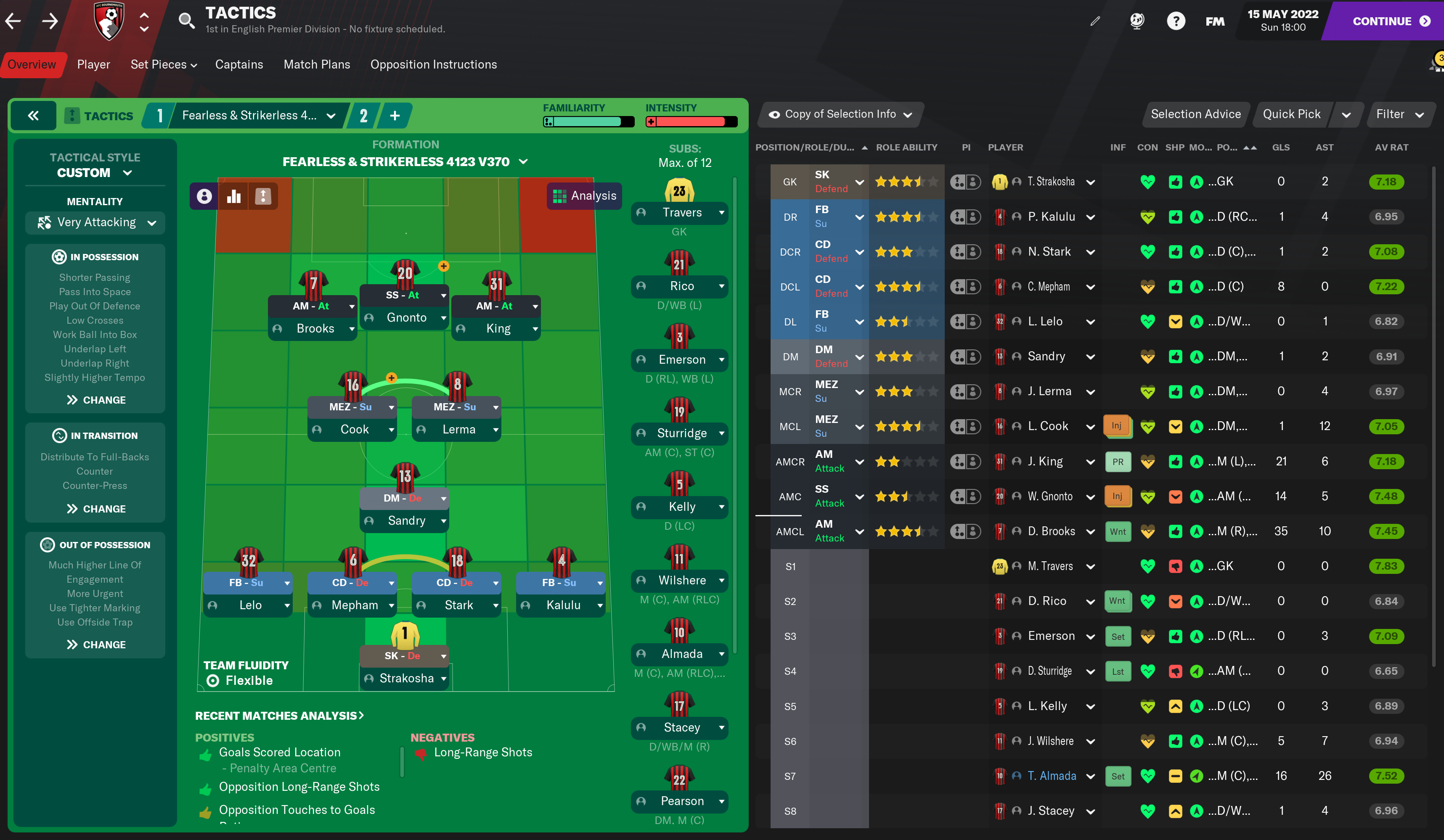 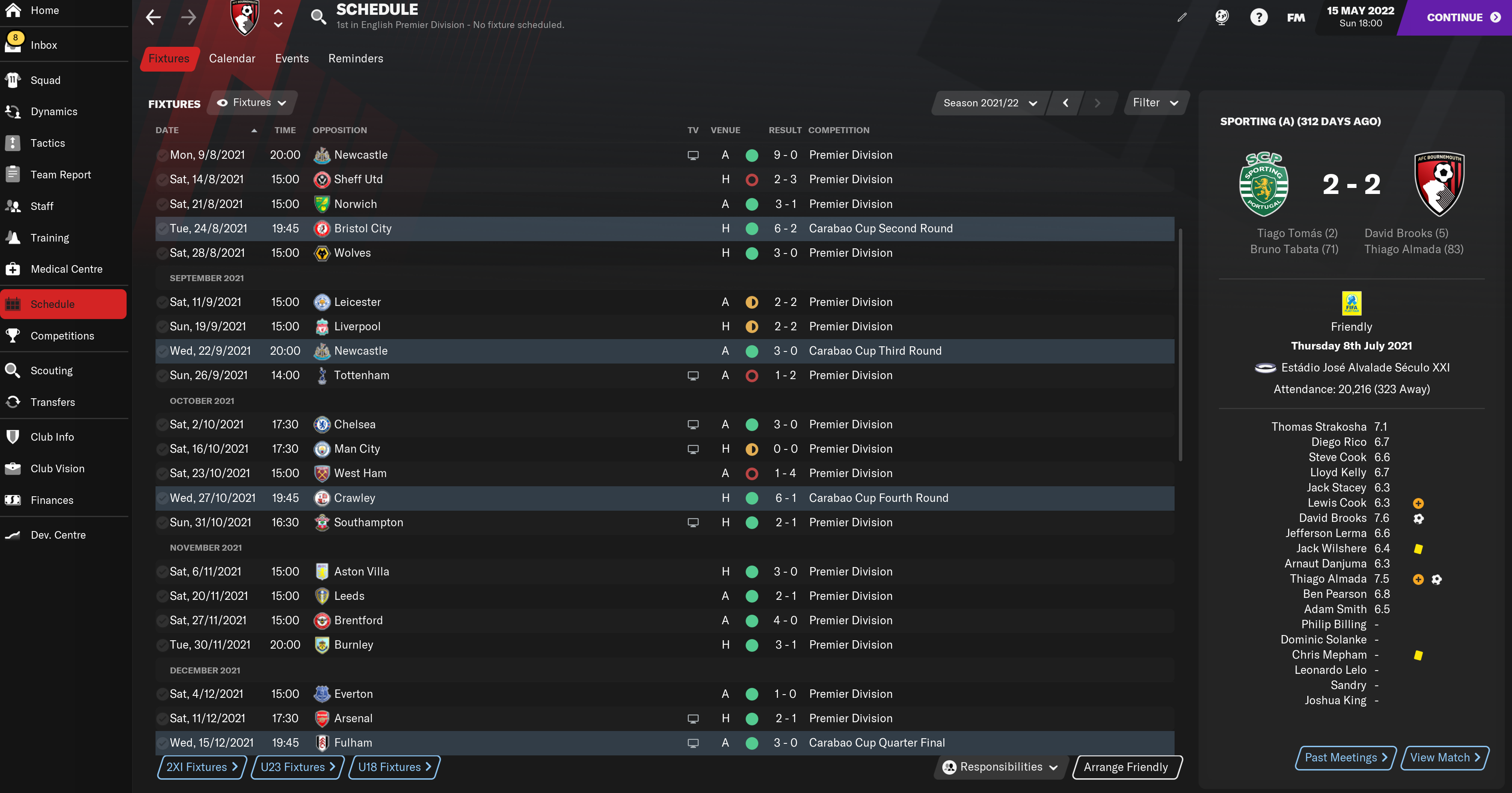 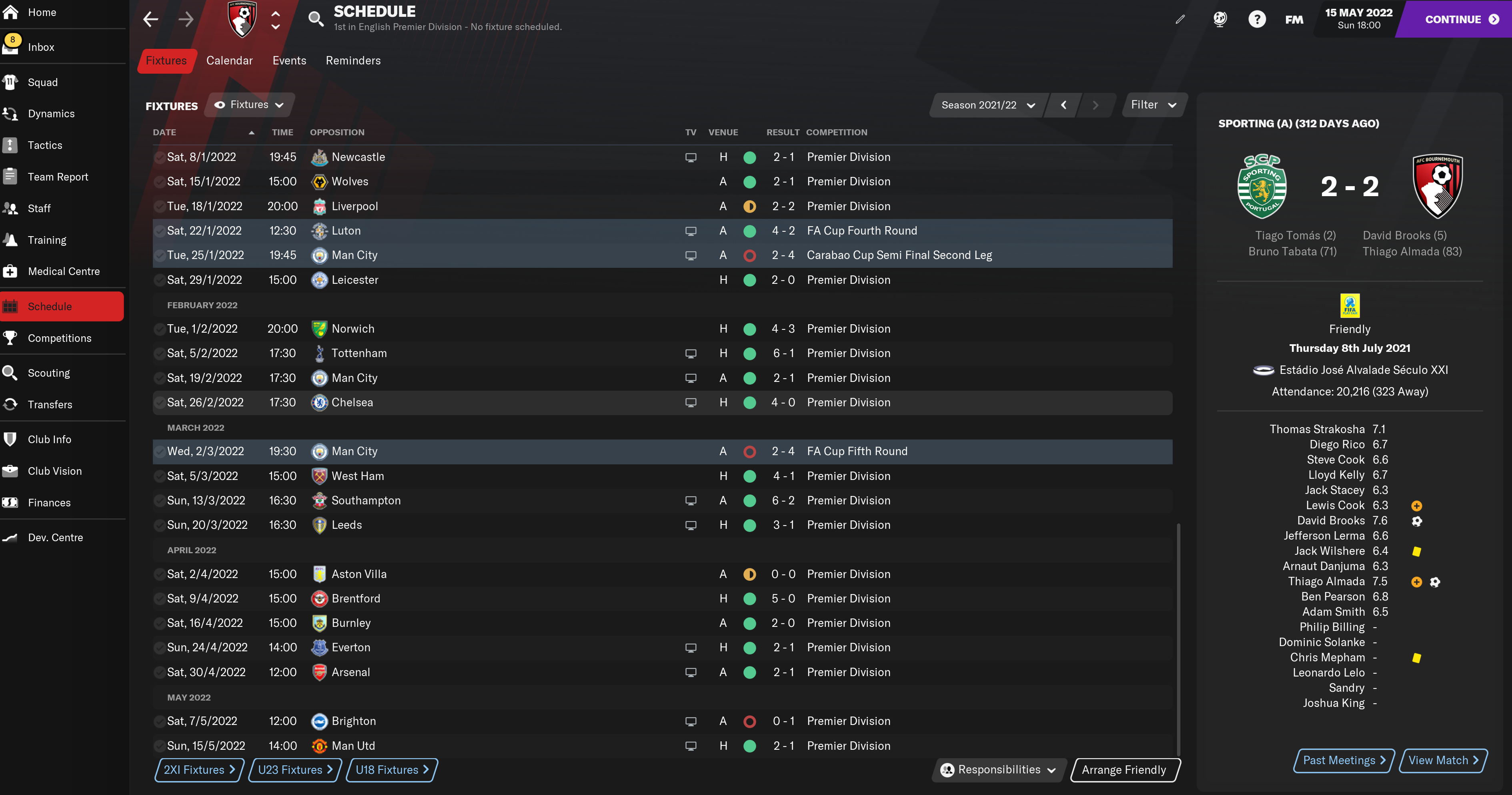 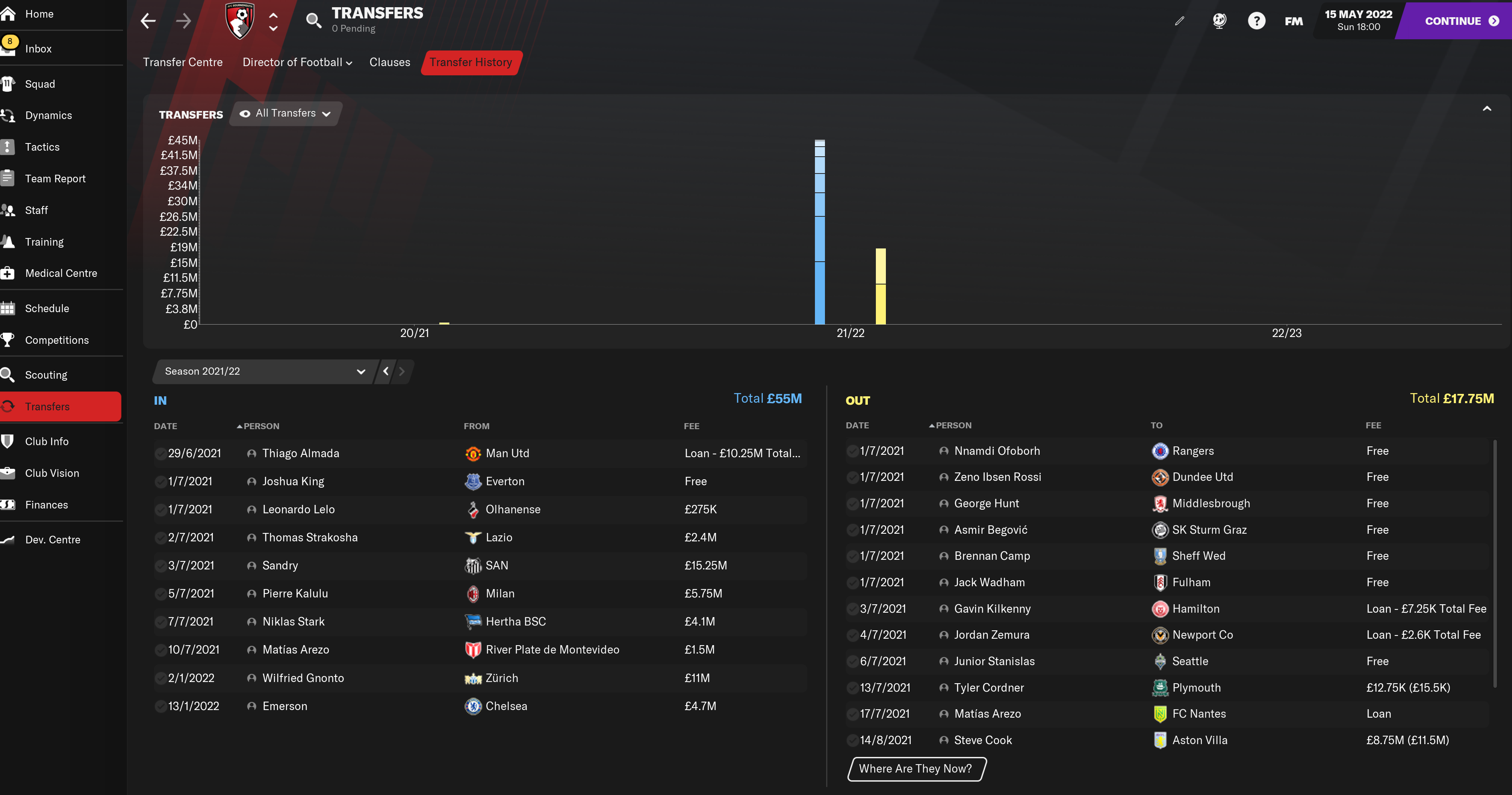 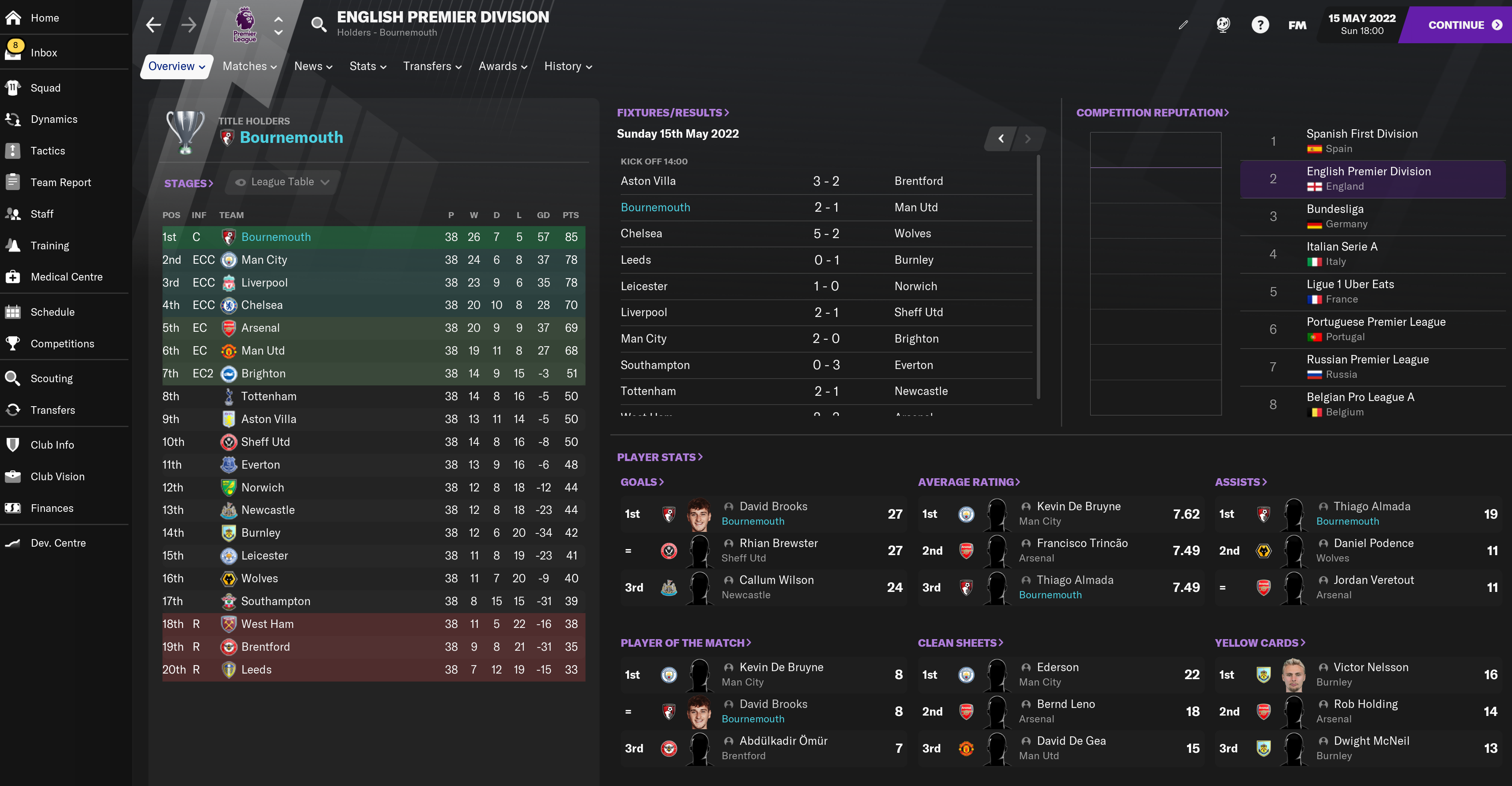