Hacker - breaking the game with all I know about it V2

And the results were: 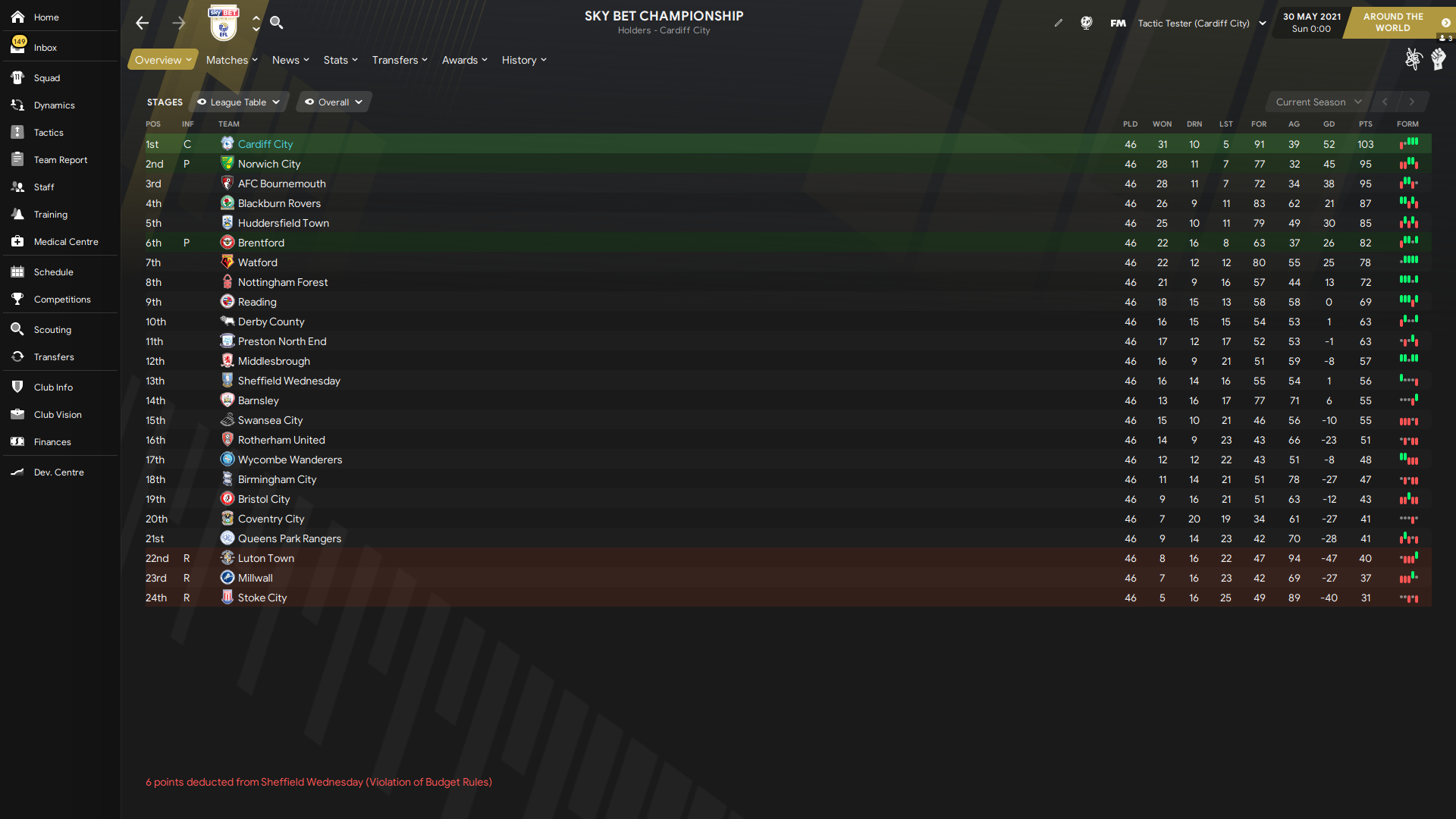 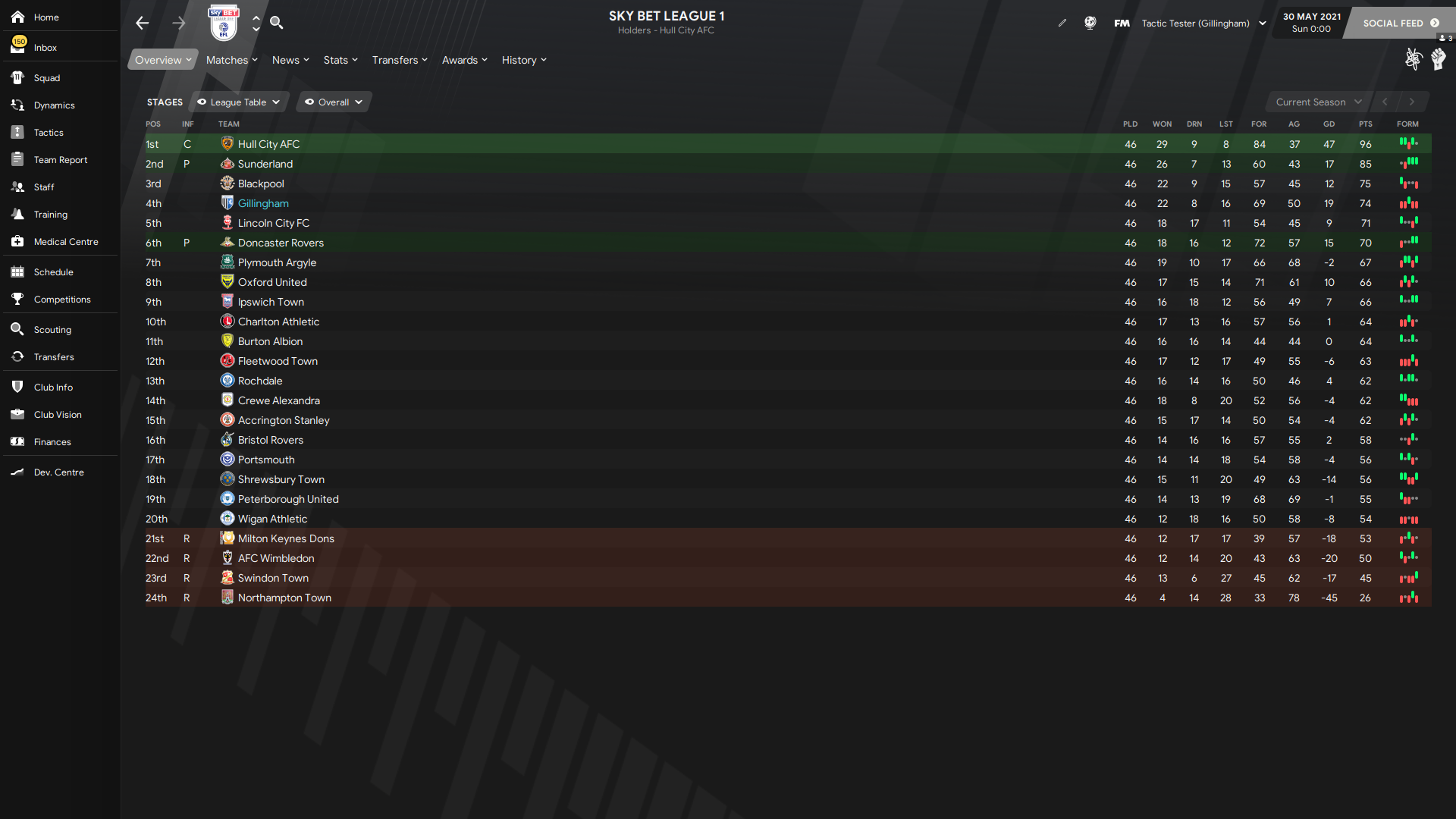 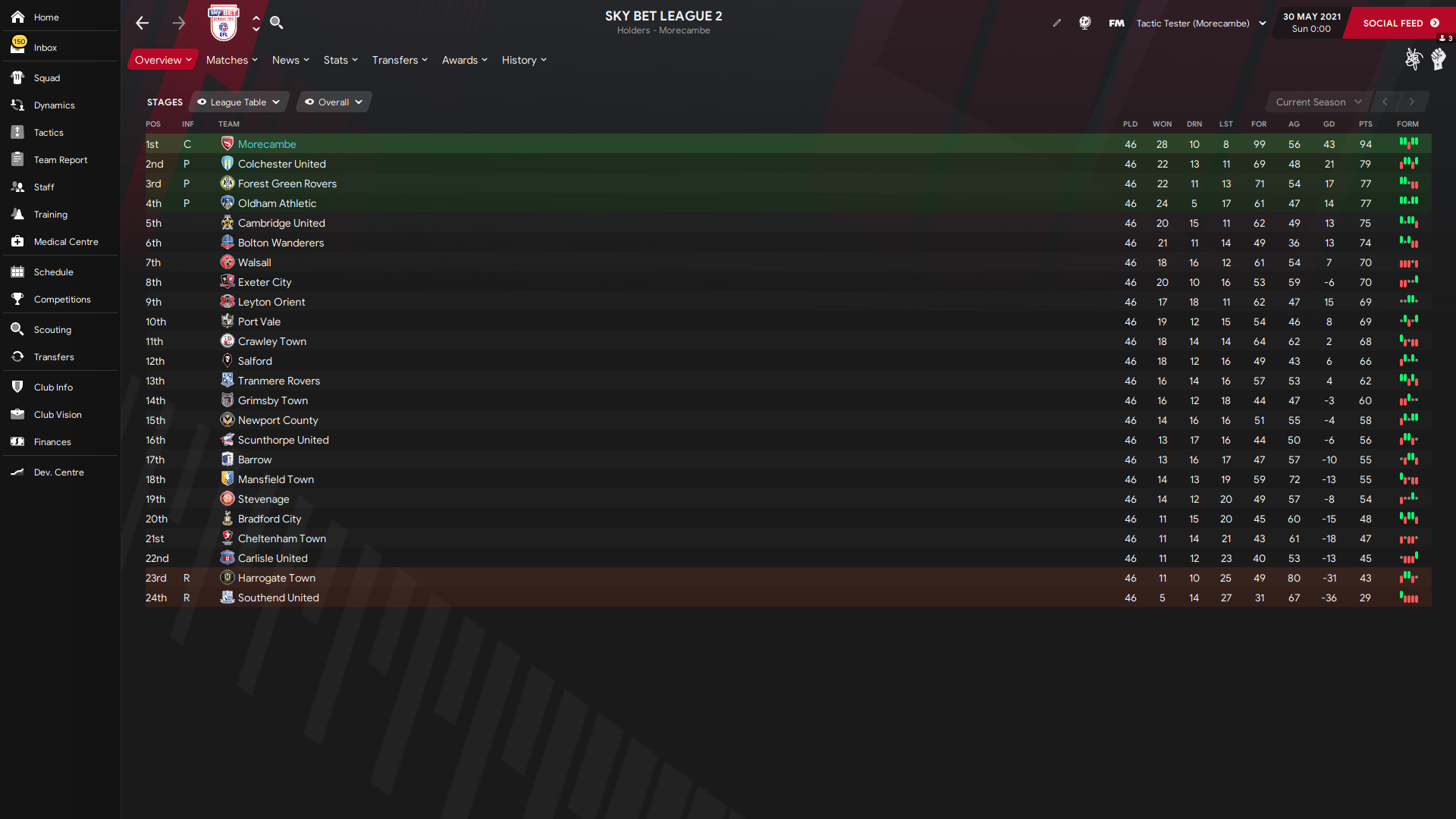 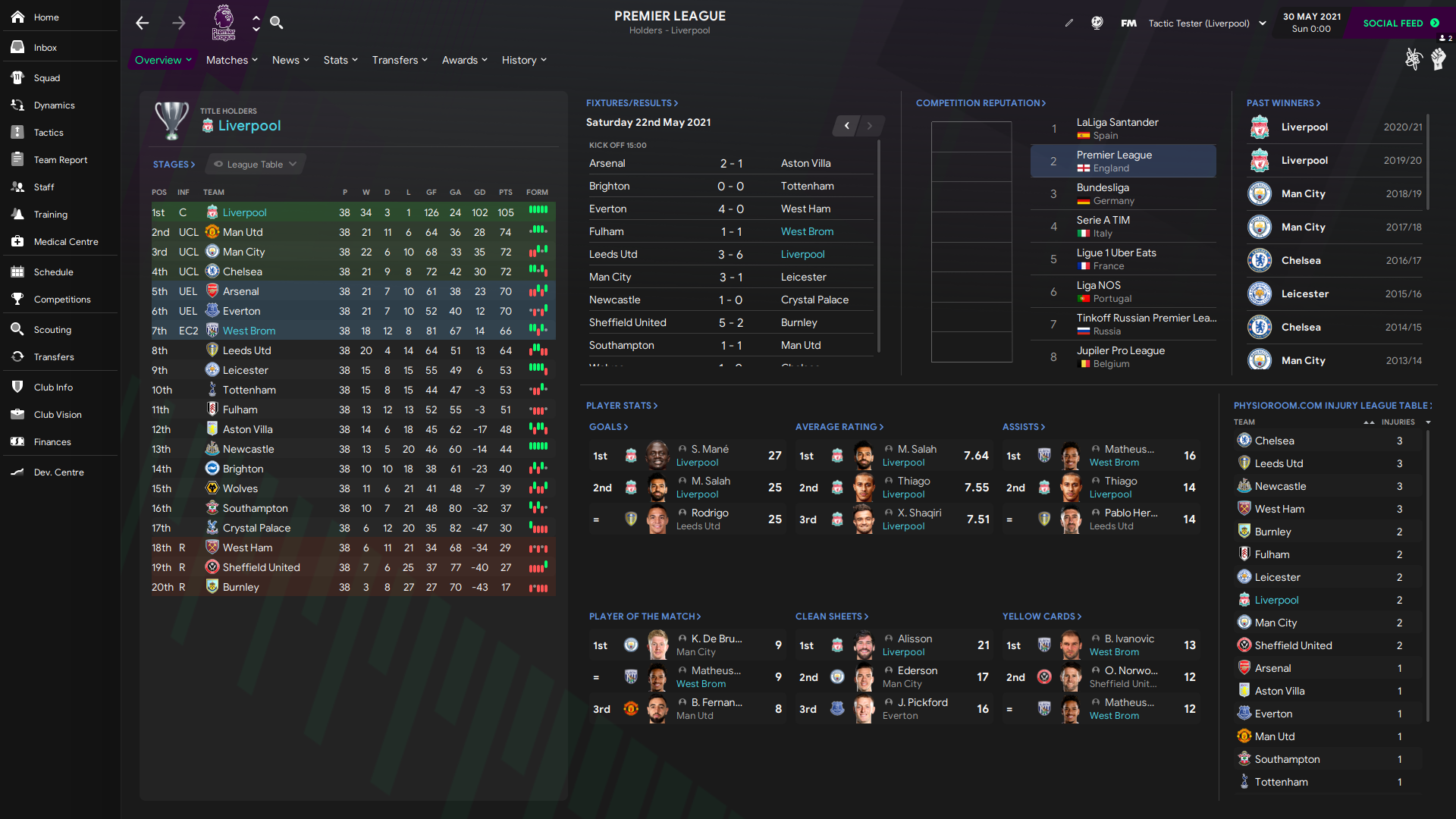 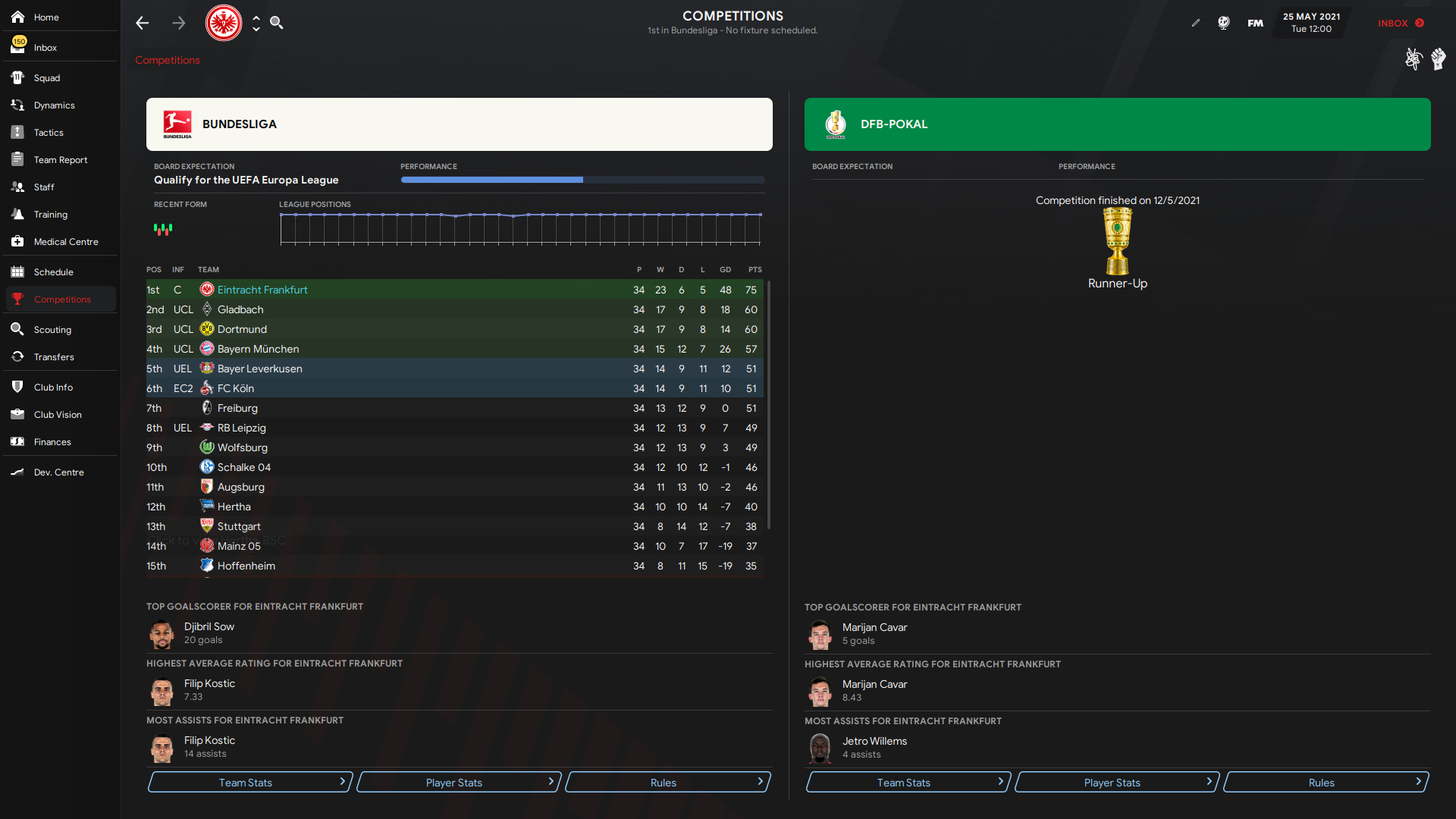 I don't like the strikerless tactics but i must admit that this seems to work very well !
Very funny to see that Gabriel Jesus didn't play in your city save, and that De Bruyne scores 34 goals AssMan on holliday have wierd choices sometimes
K 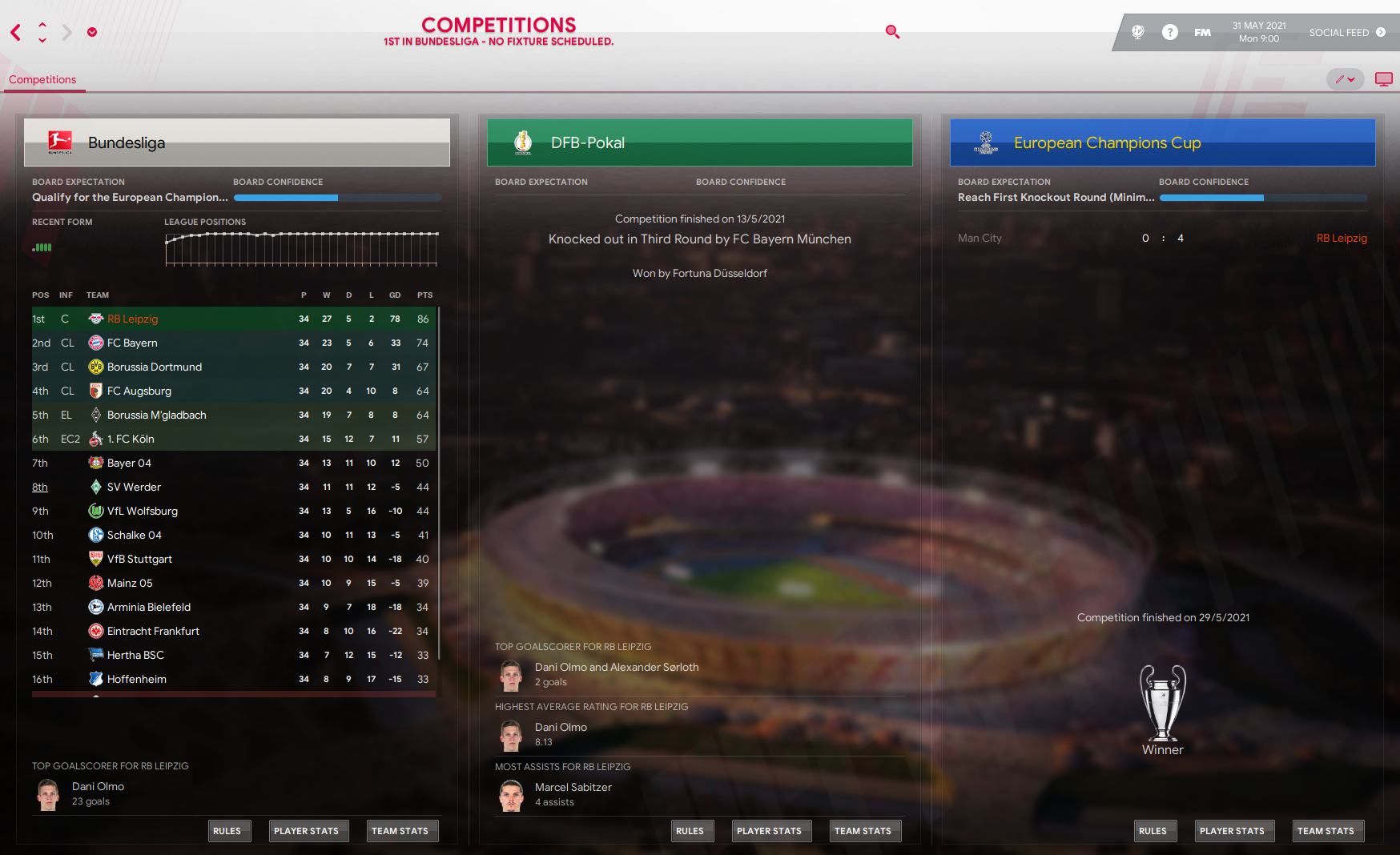 RB Leipzig holiday test using Hacker v2. I did change Alexander Sørloth and Yussuf Poulsen so that they could play SS and disabled first transfer window due to the fact that it had already happened IRL but that's it. Loses came from Bayern after Kluivert got sent off in the 33rd minute and they scored in the 35th and 52nd with Sørloth getting a consolation goal in the 90th minute and then a shock loss to Arminia Bielefeld who had 3 shots 1 on target with an xG of 0.31 compared to Leipzig's 10 shots 3 on target and an xG of 1.37. A few close calls in the CL which you'd always expect including 4 loses, finished 2nd in the group to an undefeated Man Utd side that won all 6 games and then a comeback aggregate win over Liverpool and PSG to smash Man City in the final. The german giants also knocked me out of the cup on penalties but they're always going to be tough the first season regardless of what tactic you use.

I'd also add that this was done using the realism pack from Daveincid just to test and make sure everything worked before I committed to using it in a save, but thought i'd post the results anyway and people can take them how they like.
Reactions: Egraam and Kold78
P

Any training or opposition instruction sir?

I'll test this tactic v2, very passionate thread with most detailed around tactic.

Question: what with wingers and players like Griezmann, Fati whose dont have enough skill for ML, MR? Retrain and played until their positions and skill will be good or sells and buy natural wingers?

Question: what with wingers and players like Griezmann, Fati whose dont have enough skill for ML, MR? Retrain and played until their positions and skill will be good or sells and buy natural wingers?
Click to expand...

If it's a young player with good potential like Fati, I would just retrain and play him in that position. Older player (25+) I would just sell, but Griezmann can play as Shadow Striker, so it's your choice what to do with him.

I've had success retraining pure strikers into full natural shadow strikers after a season of playing them in that position, so anyone, especially young players can be retrained into new positions. Usually players becomed "accomplished" in the position they're playing and training in after about half a season, and "natural" after full season (if they start most game). Here's an example of a pure striker I've recently retrained as a shadow striker (his long throws didn't drop by 3, I've just started a new save real quick to show his profile at the beggining of the season, and some attributes in lower leagues are generated randomly). 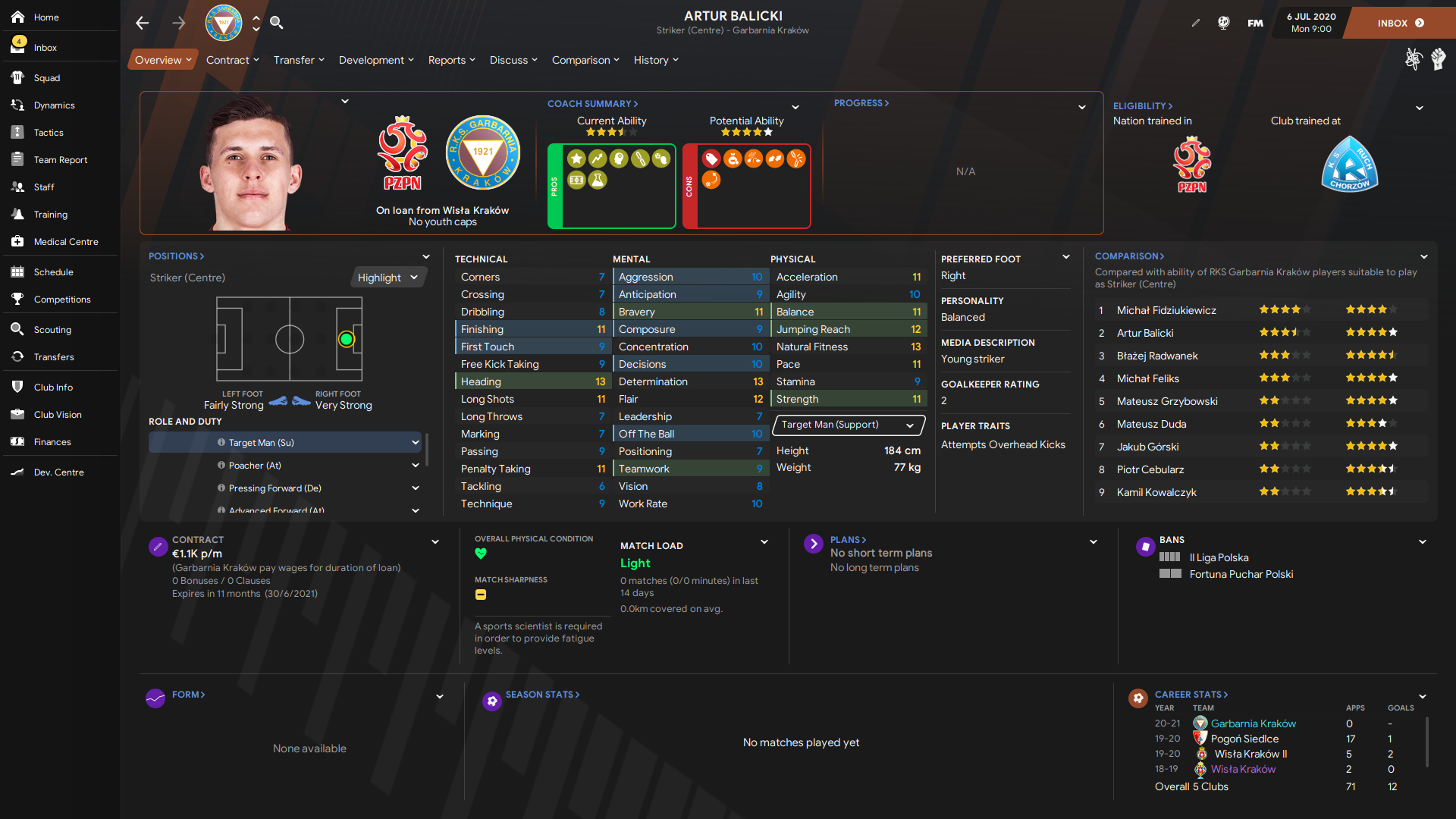 After a full season of playing and training as a shadow striker he became natural in the AMC position (despite not being able to play it at all at the beginning of the season): 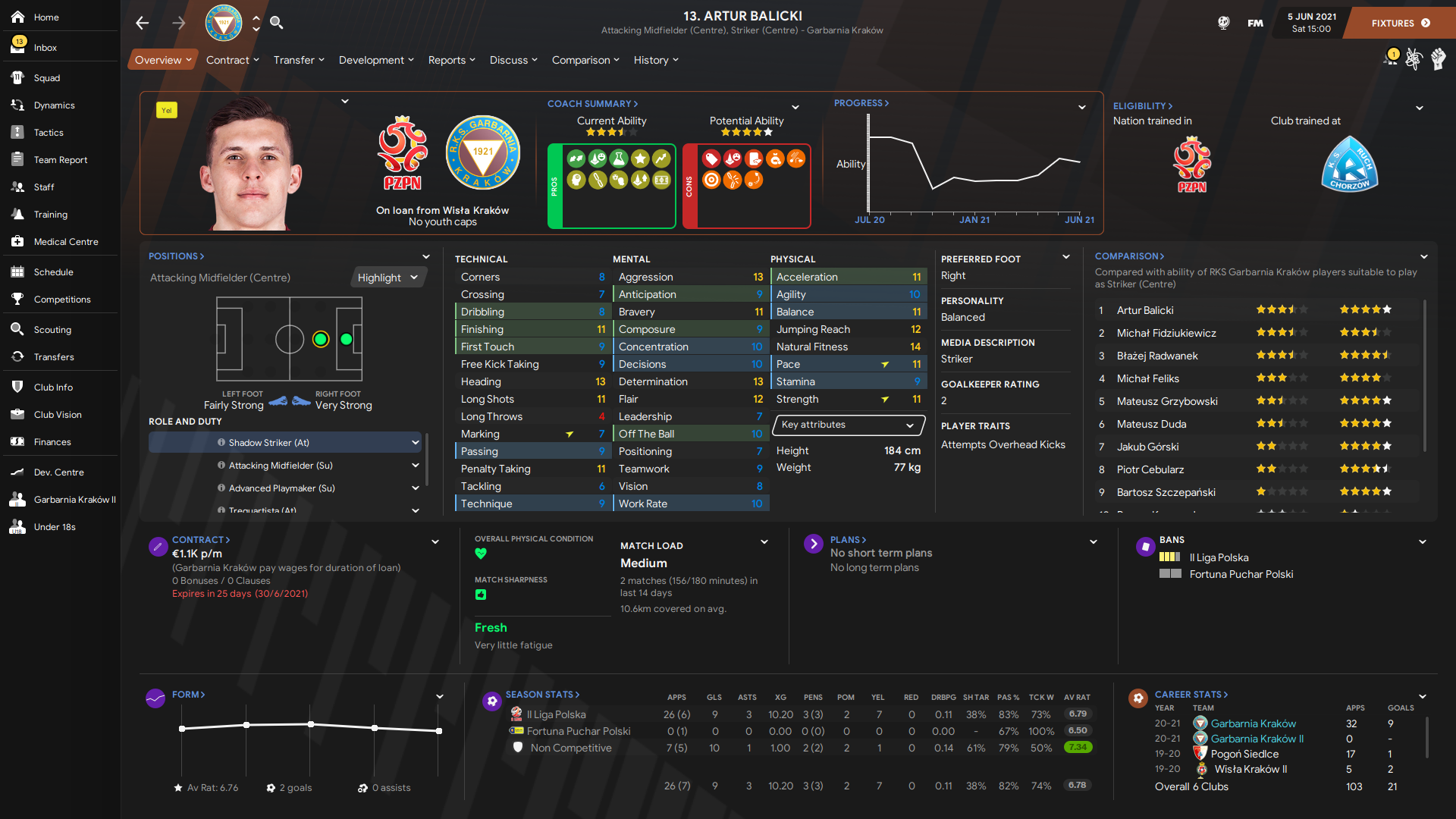 I'm using your v2 now and the team is performing good. I was using a different training schedules but from the next season I want to try your DNA & DNA 2 games. I have one question, how do you handle the pre season training?
M

Great skin what is it?

I'm using your v2 now and the team is performing good. I was using a different training schedules but from the next season I want to try your DNA & DNA 2 games. I have one question, how do you handle the pre season training?
Click to expand...

For preseason I've been using RDF's preseason schedules, they're on fmscout, just google "rdf's training schedules fm21" and you'll find it. Week 1 & 2 only 1 game per week, then week 3&4&5 two friendlies per week. If my preseason is longer than 5 weeks I usually use the schedule for week 2 twice (so week 1 schedule, 2 and then week 2 once again). If I'm not looking for any tweaks to the tactic or anything like that, I arrange the friendlies against very weak opponents and leave them to assman, so he can win easily and raise morale.
C

I'll do exactly how you said. Thanks for the quick reply
S

Results update.
V2 used since granada Copa Del Rey Match . It my seems not so impressive like previous results but total domination in most of the matches is visible when you watching it's on extended and seeing the stats. Draws and 1- 2:0 wins I should won 4:0. Fm-ed
Only one hard match was against Liverpool in UCL final.
I think the key to FM2021 is this formation + positive mentality. Still it can be improved e,g set pieces where I'm tweaking.
@Egraam DNA approach is very interesting and useful. 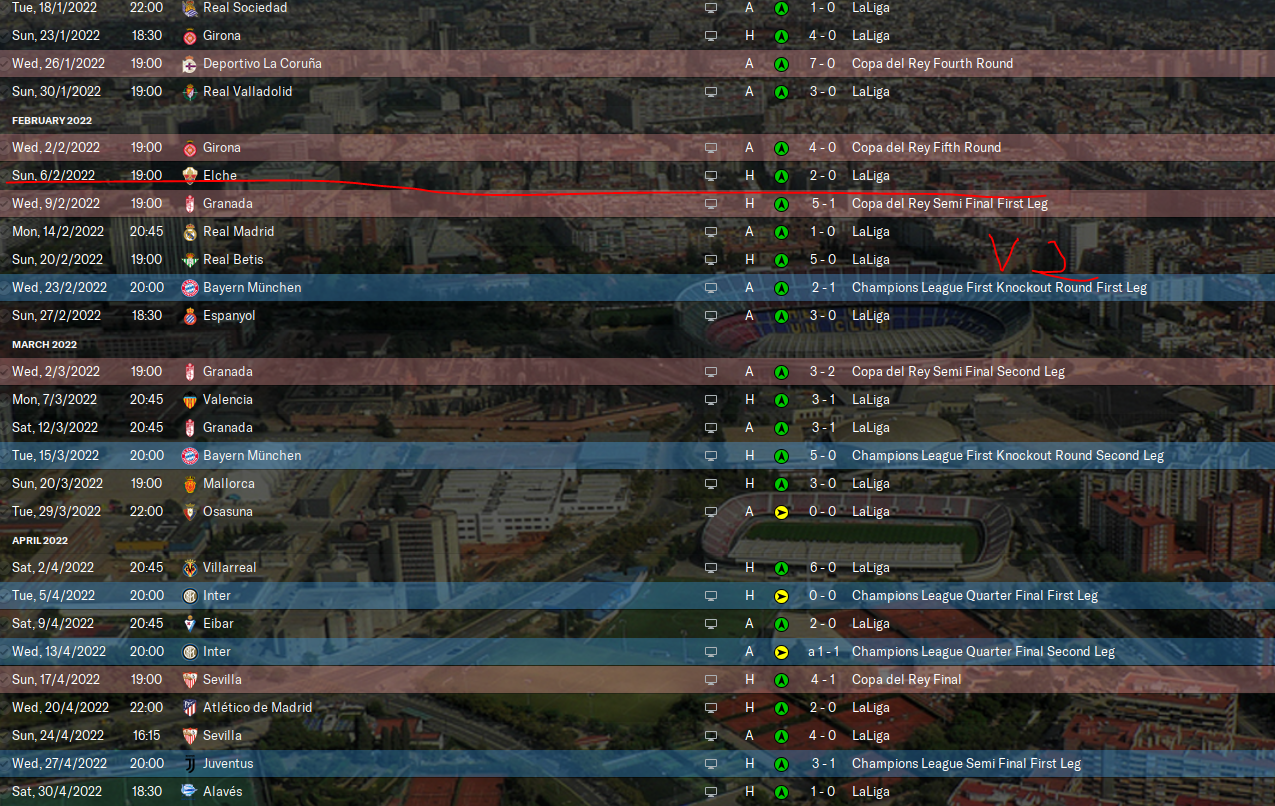 Do u have away/big match tweaks?
S

xeno94 said:
Do u have away/big match tweaks?
Click to expand...

No tweaks - just constantly trying new corner set pieces setups - as noone have found gamebreaker (match engine) so far... Short post are good bud not enough for me. it's just script yo be brake....
X

salzby said:
No tweaks - just constantly trying new corner set pieces setups - as noone have found gamebreaker (match engine) so far... Short post are good bud not enough for me. it's just script yo be brake....
Click to expand...

It's fine, i don't like using exploit set pieces. I will look for a defensive variation of 41320 formation.

So far so good with this tactic anyway, sometime slow starts in games but doing well
S

And this is how most of my matches was looks like on Hacker v2
except of UCL when it was less dominant:
Aha - Brca B + U19 table - as those one is showing how good tactic is for real. Compliments for @Egraam 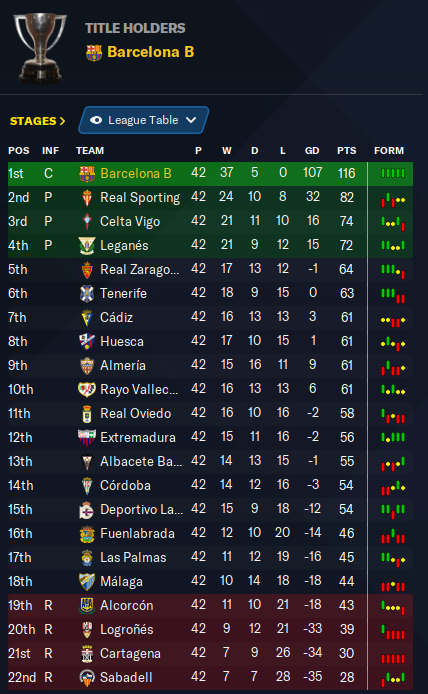 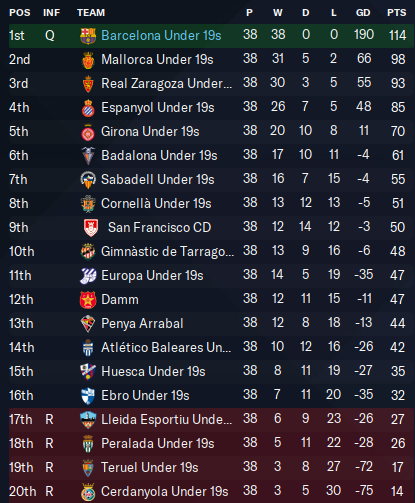 As I often modify my training schedules because it's hard to create one training schedule that will work on everything, here is a little guide regarding training sessions for this tactic so you can build and modify your own schedules


Building your own training Guide ​
How to build schedules:
Use 2-4 match preparation sessions per week (+ team bonding) depending on how much you value match results vs player development and how confident you are you will win the game (the stronger you are the less match prep you need)

Use Match Review after every game until you have 100% tactical familiarity, then maybe you can replace it with some low intensity session.

Recovery is your friend, Rest not so much - don't have more than 2 rest session per week, it will decrease match sharpness of your bench players heavily - Recovery won't and it greatly reduces injury risk.

I would use sessions in "The Best" tier every week, and I wouldn't use "Decent" more than every 2-3 weeks. If a session's not here - I don't recommend using it.


The Best:
Attacking Movement
Team Bonding - low intensity, increases happiness, team cohesion, teamwork and teamwork for the next game, use always when you have a slot:

Good:
Teamwork - use when you have low team cohesion, or in pairing with att. movement when you are favorite/playing home next game
Defensive Shape - useful when playing away/underdog
Att. Corners
Set Piece Delivery
Community Outreach - it's not a match prep session, but it's low intensity, increases teamwork and team cohesion, when you have a free slot somewhere you can put it in

Situational:
Penalties - I use them almost always before cup games, safes you a lot of nerves when there is a draw
Def. Corners - when you are a heavy underdog - opponent will get a lot of corners so it's useful then

The Best:
Attacking Patient - Best attacking session in my opinion, works on all the important attributes for both units, except maybe dribbling (that's why it's important to switch sessions every now and then)

Decent:
Defending from the Front - it's a heavy pressing tactic, it's useful to improve defensive attributes of your attacking unit every now and then
Attacking Shadow Play - when you want to have a low intensity day you can just pair it with defensive shadow play
Chance Conversion
Chance Creation

The Best:
Defending Engaged - all good attributes for both units + tactical familiarity

Good:
Aerial Defence - Heading is always useful for defenders, for both attacking and defensive corners

Decent:
Defensive Shadow Play - pair with Attacking Shadow Play for low intensity day
Play from the Back & Attacking Overlap - more attacking-focused defensive sessions, but it's good to put one of them every now and then - you want your defenders to be able to pass ball accurately to your other formations and not just hoof it mindlessly. Attacking Overlap is especially useful for Inverted Wing-Backs

Good:
Physical & Quickness & Endurance - all work on really really important attributes - usually I go for Physical when I have a lot of fixtures to play and don't want to risk injury (as it's less intensive), and for Quickness/Endurance when I play only 1 game per week all the time (I'm currently using one schedule with lower league team when I have both Endurance and Quickness every week)

Decent:
Tactical
Goalkeeping & Shot Stopping - I try to have one of those two every other week so goalkeepers can get a little bit of attention
Last edited: Feb 27, 2021
Reactions: Kold78 and salzby
You must log in or register to reply here.
Share:
Facebook Twitter Reddit Pinterest Tumblr WhatsApp Email Link
Top