I was listening to the radio last night, and the subject of gay footballers cropped up, followed by the revelation, that recently Max Clifford was approached by 3 premiership footballers, who openly admitted that they were gay. And he advised them not to come out, due to the fact that "football is steeped in viscous homophobia".

What I don't understand is, why is it different for footballers, compared to other sportsmen/sportswomen? For example, cricket batsman Steven Davies has come out and admitted it, and was fully supported by his colleagues. Rugby player Gareth Thomas has admitted it too, with no consequence.

However a tragic example in football, is Justin Fashanu, who suffered years of terrible abuse, and took his own life in 1998. And the attempts to tackle homophobia by the FA by making a film tackling the subject, had to be withdrawn, due to the inability to attract high profile players. Surely if the armed forces can adapt to such changes regarding this subject, then why can football not do the same?

To me homophobic chants, and homophobic "banter" has no place in todays game, but how can it be stopped, if players are too scared to come out? As Gordon Taylor said "Football is a macho world but then so was the armed forces, and that has changed." If your favourite footballer came out, would you think any less of him? I sure has **** wouldn't. I couldn't care less if they are straight, gay, bi...whatever. I want a player to be happy at the club, and doing well.

But by the looks of it, the shadow of what happened to Justin Fashanu still looms overhead, and instead of coming out, the fear instilled by such an event, prevents a player from doing so. And if indeed, there is also homophobia within a team dressing room, then the problem is much deeper than we realised.

Would like other peoples views on this. Should players come out or would it be in their best interests to keep it to themselves? And who is to blame for it? Abusive fans? Team-mates? Or is it the FA for not doing more sooner, to tackle the problem?

It's not too different to other sports. Gareth Thomas was the first ever rugby union player (and as far as I know, the only one) to openly admit he was homosexual. So it's a major issue in other sports.
F

People need to stop this and let gays live their lives..... in sport or wherever.


Footy4Life89 said:
Not going to lie i hate gays i dont know why probs because people like alan carr and julian cleary off the tele i just despise and it makes me hate them
Click to expand...

The gays you see on tele are a bad stereotype, things like loud, annoying, flirtatious and what not have all been set by TV and we now think this of gays which is completely not the case.
A

People need to stop this and let gays live their lives..... in sport or wherever.
Click to expand...

Pretty much spot on. I'm wondering if also it's due to an upbringing, as parents would have lived in times when such a thing was never discussed, or they were brought up to frown upon them and the lifestyle
N

there was a very good inside sport on this and we watched all about how justin fashnu and all the pressure you face from becoming out.

They refered it to being the last taboo of football but when you look at it its not really like the last taboo as gay has become a part of the world we live in today. I think that there will be banter from it but that is nature within the sport and why some people play it. But when you look at justin fashnu and the pressures he faced in that kind of environment at the time and he got stripped of everything really all for being gay? (which is wrong in todays nature but back then it seemed to be something that was unheard of within sport)
F

For example no one in the NHL has openly admitted to being gay. So, it really is a problem in most of sports.
C

who are some of the big name footballers who are gay?
i hear Robben was?
also Sol Campbell?
but i dont know for sure and could be wrong...?
D

How would the FA tackle this? Gareth Thomas was very brave when he came out but that bravery was soley him and not the bigwigs in rugby. It probably helped that he felt comfortable in a team that would support him and fans who would back him all the way.

The fact is that no matter what the issue there is always going to be chanting at football aimed at a 'weakness' of a player. whether that be sexuality or the John Terry saga. Jolean Lescott is reguarly called the elephant man because of the scar on his head, Wayne Rooney is always reminded about his past with old women, Steven Gerarrd is always told how his wife has been sleeping with a drug dealer or how he got a teenager pregnant. It doesnt matter what the subject is, if a group of supporters can chant something to make a player have a bad game against their team then they are going to do it. It wasnt that long ago that race was used to try and distract a player!
A

Fonzie said:
For example no one in the NHL has openly admitted to being gay. So, it really is a problem in most of sports.
Click to expand...

That is surprising, only because I came across this article

I admit didn't think any NFL player would come out, but apparently so. It's just so incredibly sad, that anybody has to go through this
B 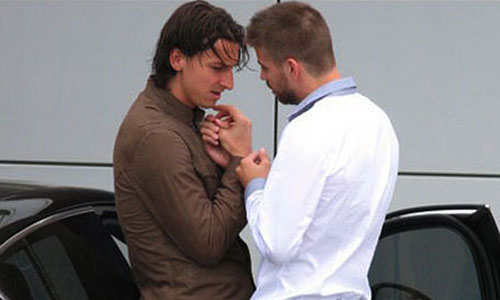 It's a vicious circle, this subject. Football attracts many of the type of supporters found a lot less frequently in Rugby and Cricket, the thugs and the uneducated, it being the typical working-class sport historically after all. So gay people are afraid of abuse, and therefore keep it a secret, meaning that other gay footballers also feel scared and do not reveal themselves either lest they get abused. So now it's a circle that cannot be broken unless there is one exceptionally brave gay person who does step forward. Don't blame them for not doing it either, if I was a gay footballer I would have serious reservations about revealing it myself.

They should be allowed to come out without getting the abuse but fans will still give the abuse so in some ways I think it would be best for the players to stay quiet until the mentality has changed.
J

Prejudice is awful. Prejudice without even having a reason? That's just sad. You do realise those people on TV are chosen to be on TV because it suits the gay stereotype that TV exec's want, not because it's a representation of the gay community.
D

Erm, to be honest, Being gay in football is going to be a big problem.....Simply because there are alot of Football fans who do not like homosexuals....and they'll be targeted for it....

And MAYBE, just MAYBE, people in England would accept it and say well done....but imagine if the gay footballer had to play in Russia, or Eastern Europe? Imagine the abuse....If a player feels he needs to come out and let the world know he is Gay, then good luck
T

so you hate camp people, not gay people


pigeon holing all gay people to be/act like the likes of alan carr is just pathetic.
A

CtPauley said:
They should be allowed to come out without getting the abuse but fans will still give the abuse so in some ways I think it would be best for the players to stay quiet until the mentality has changed.
Click to expand...

wow.... that is the single most ignorant thing ive seen for a while. hating something without even having a reason. christ almighty
F

Also, no thread about homosexuality in football would be complete without this rather sweet photo.