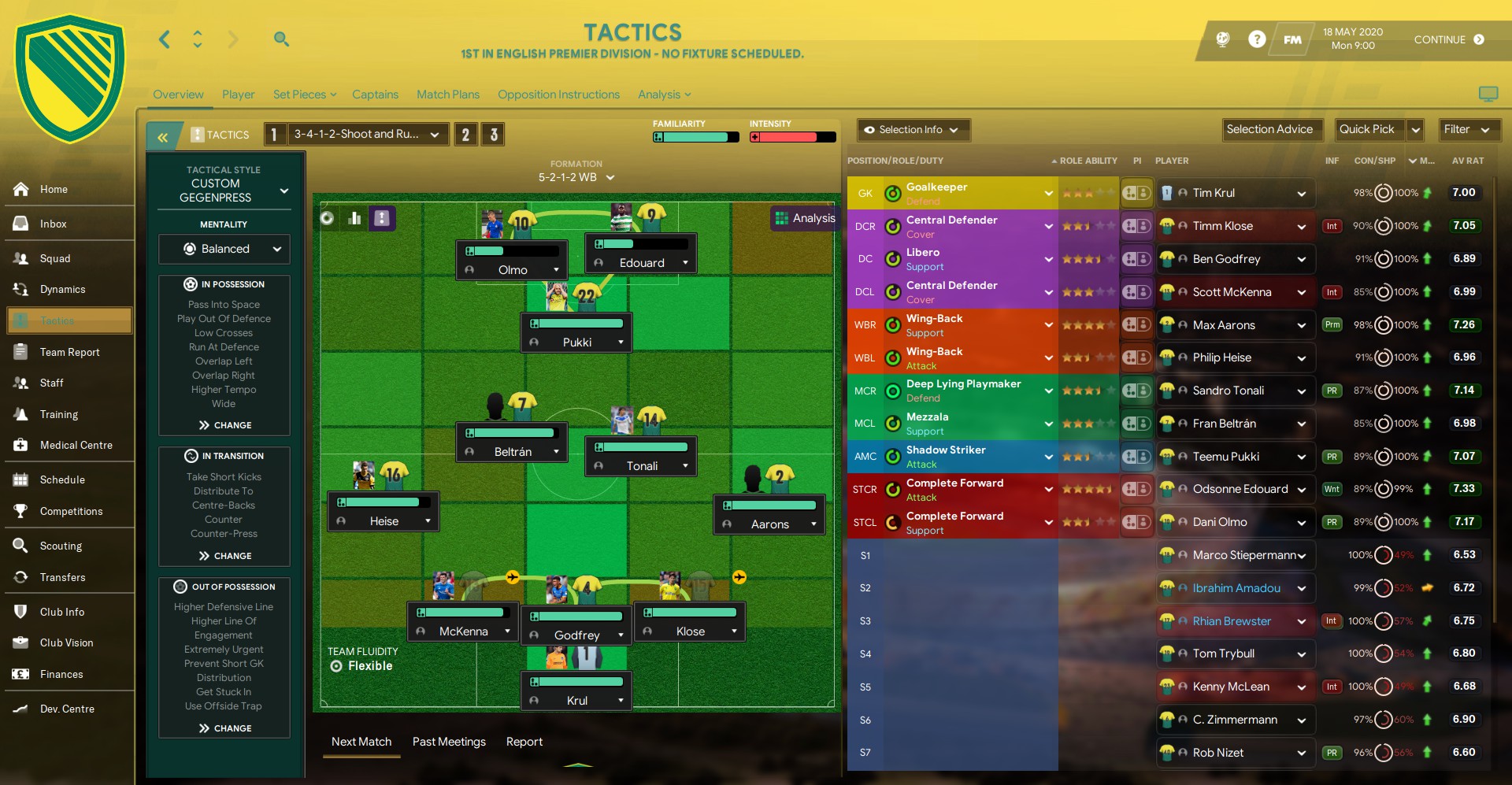 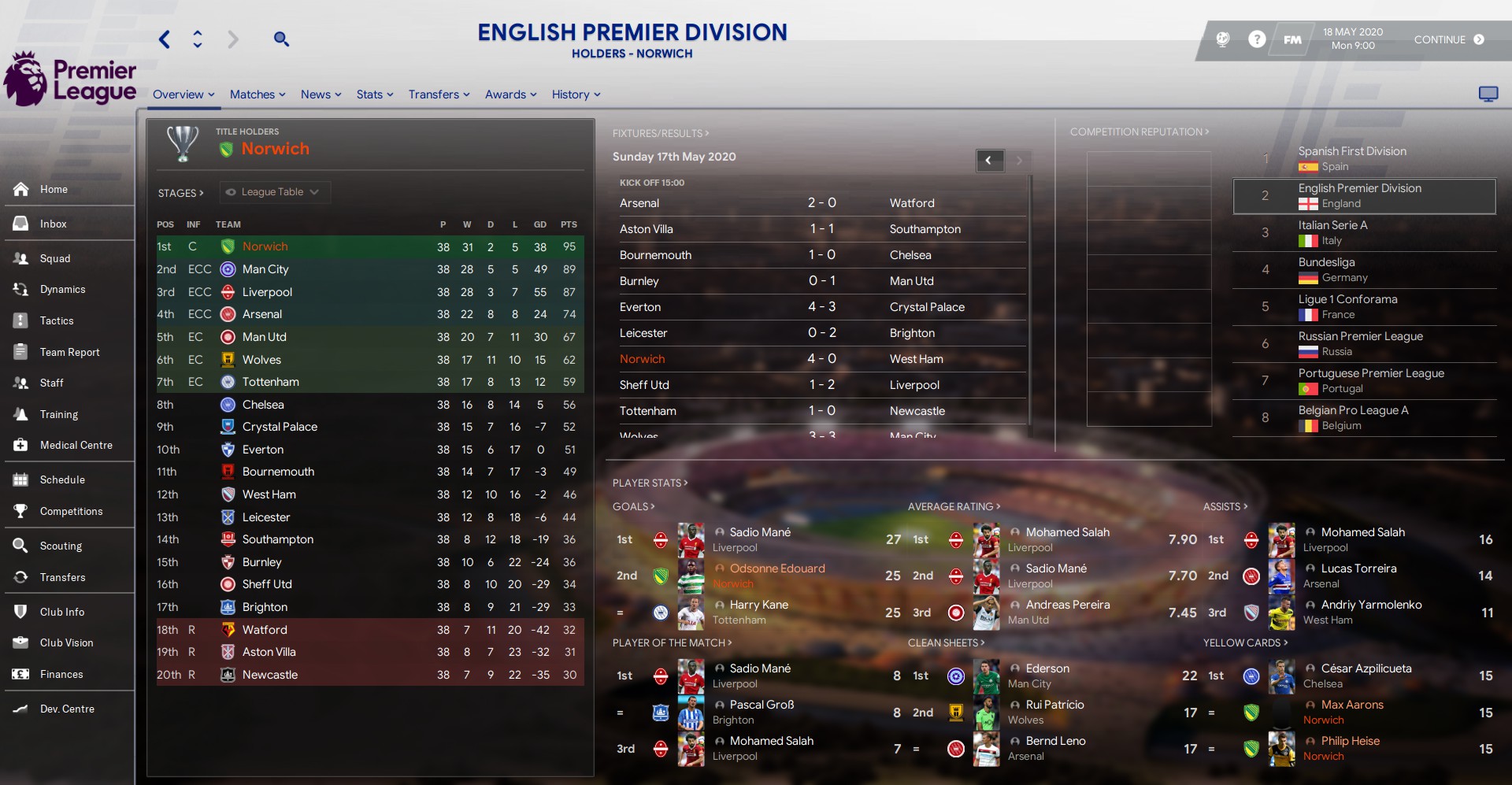 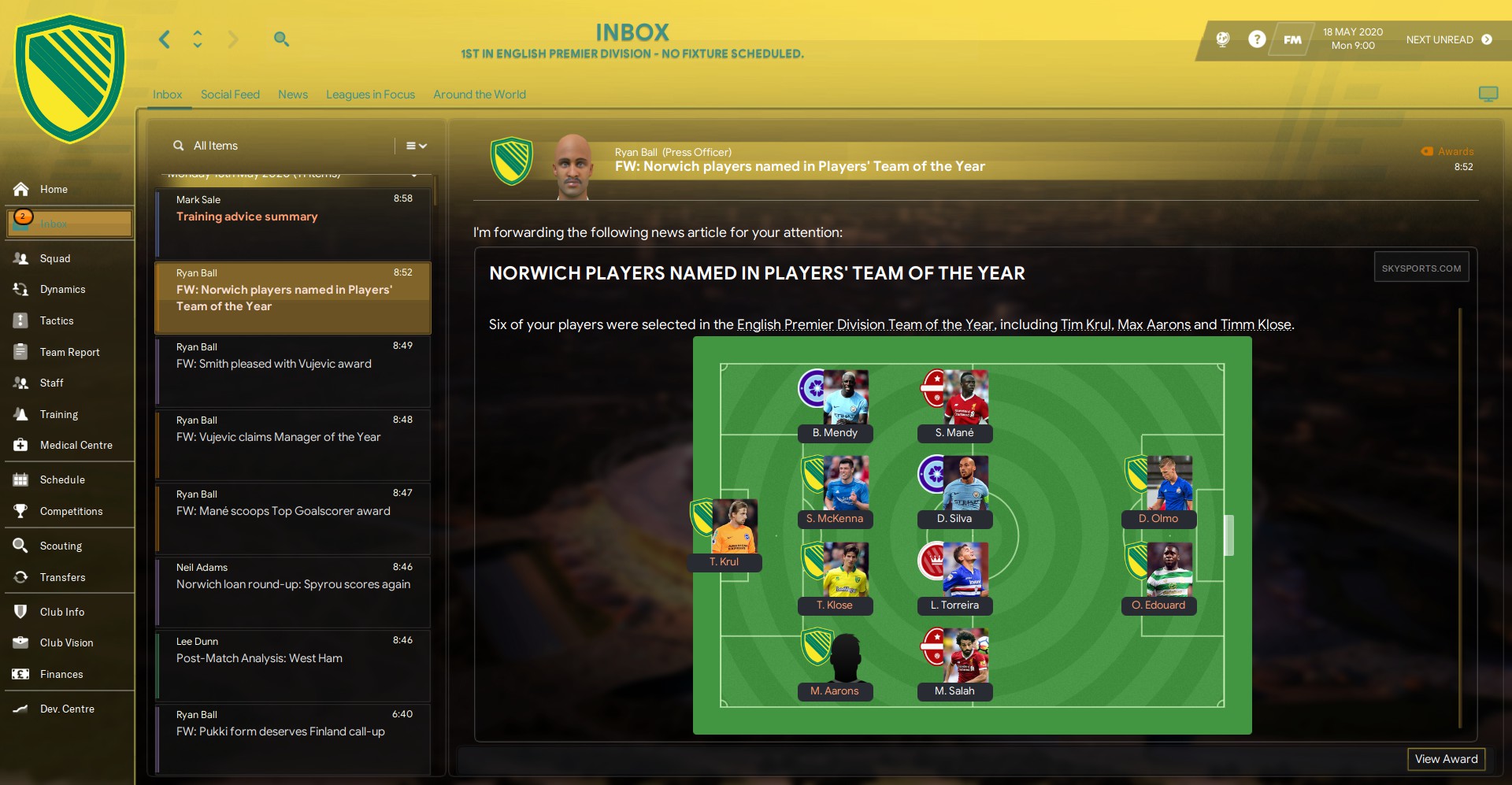 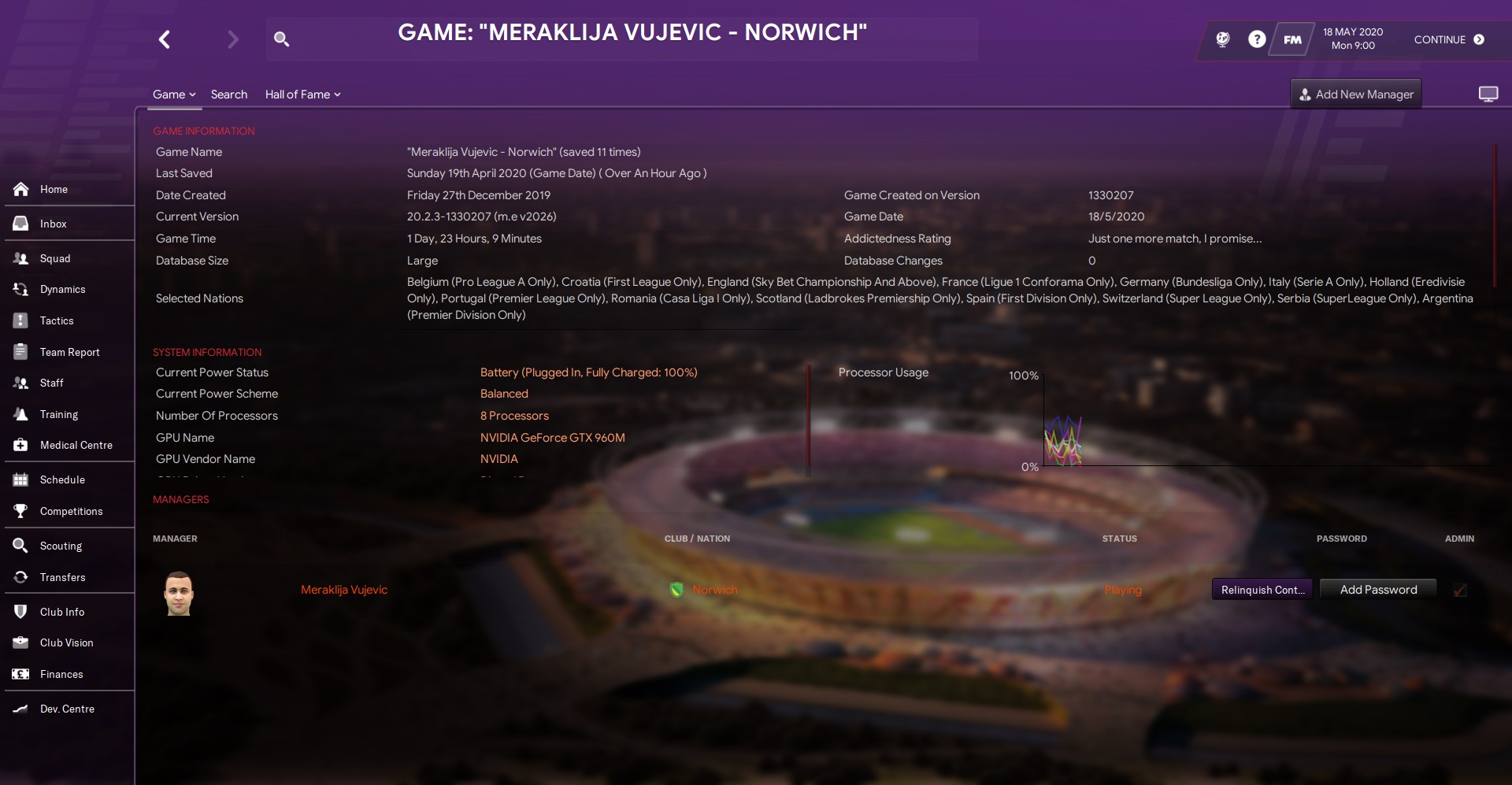 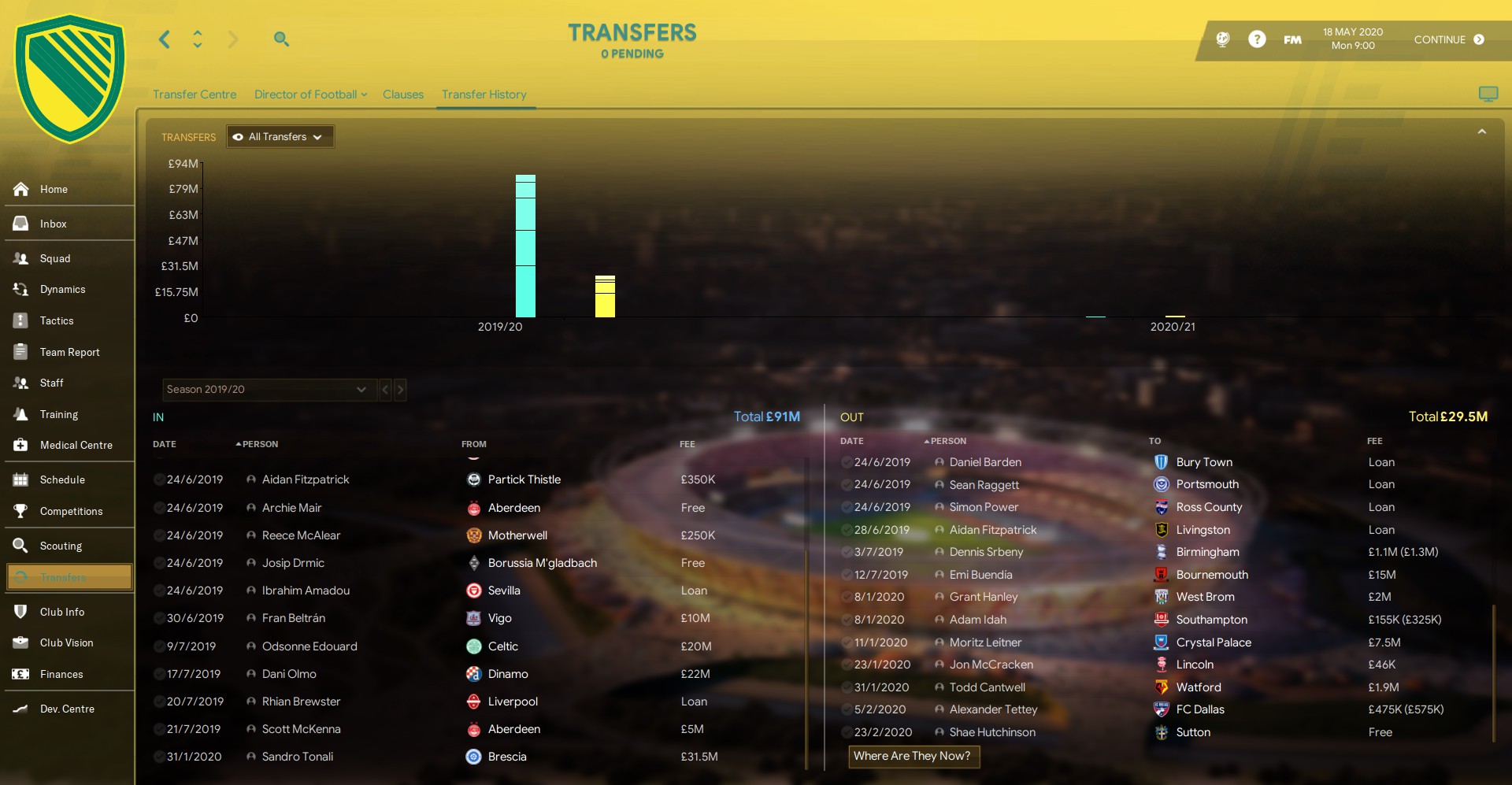 Due to warios reasons(absence from home,shity FM 19) I finaly started to play Fm on Cristmas day.Like every year there is no any progress with match engine,they only adding stupid features what I never use.
People who watch my You Tube videos the know my poor opinion about Sport interactive and why I never use some features.One of my questins to Sport interactive why no any famous tactican from comunity is not working for Sport interactive,their response was that game is not created for tacticans then for average players who buys the game.

It was not easy task to create sucesfull tactic with this type of match engine but somehow I menaged to do job and my Norwich team won Premiership in first season with 95 points.

For defense I wanted best setup to deal with oponent direct long passes.

When my team is under pressure I wanted to have 5 diferent players who can supply direct passes to my strikers and expose teams who plays with 2 central defenders.

Against teams who plays with deep defense line I wanted to have plenty people in oponent box to minimese chances for sucesfull marking.

All set pieces are done by my shadow striker.

I do only invidual trainings for my players,everthing else including OI is done by my asistant manager.

All players need to have some kind of finishing move(placed shot,shot with power)

Wingbacks need to have good crosing and work rate abilities.

Complete forward on atack must be top player,with decent mobilty and high finishing.

During games where I realy need to score in last 20 min I change team width and tempo to maximum.

Be awere of get stuck in team instruction and also some of players have instruction to tackle hard so you need to be careful.

I tested this only with Norwich,so feel free to try it and tweak it if need.

Coming home in February so then I will do some videos.

MediaFire is a simple to use free service that lets you put all your photos, documents, music, and video in a single place so you can access them anywhere and share them everywhere.
www.mediafire.com
Last edited: Jan 1, 2020
Reactions: Aquaplex, Conn, hal107 and 10 others
M

EDIT- It's in the end of the post, sry

Legend ia back!finally....looking forward to test it immediatelly!!!
There are no new videos on youtube I am wondering why??Cheers from me!!!
V

Babemocni1988 said:
Legend ia back!finally....looking forward to test it immediatelly!!!
There are no new videos on youtube I am wondering why??Cheers from me!!!
Click to expand...

vujevic said:
Not in Croatia because of job,coming home 01.02.20 so then I do some videos!
Click to expand...

And what about Touchline instruction?Olso done by A.Manager or?
Last edited: Jan 1, 2020
V

I completed test with Celta on holiday mode 4 place without any transfers!
Reactions: Babemocni1988

I completed test with Celta on holiday mode 4 place without any transfers!
Click to expand...

Hi Vujevic, looks like there was an issue when the thread was created as it didn't make it as a resource (we're looking into the cause of this). Hate to ask this - but could you create a new resource. This should allow you to use the template.

Once done I'll lock and remove this thread since it will then be corrected and will be go through the FM Base testing process.
V

I would like to keep this tread,not big fan of resurces .
like this I can post here my future cariers and show my new clubs.
Reactions: Babemocni1988

Oh, you can still do that with the resource to! Along with posting updates and publishing them as a comment. People can also then use the history option to get previous versions and download without going to mediafire etc.

I completed test with Celta on holiday mode 4 place without any transfers!
Click to expand...

I am doing a test right now and potencial is incredible!Undefited in 12 matches,11 victories,so now definitly I will start my carier with this tactic from beggining!Thanks a lot man,incredible job against long balls,rock defence and my team scoring 3 goals per match!Keep it up man,REAL LEGEND is finaly back in game! So happy
Reactions: vujevic

Spikester said:
Is this for FM20?
Click to expand...

The tactic was specifically designed and tested on FM 2020 latest patch 20.2.3
Reactions: vujevic
B 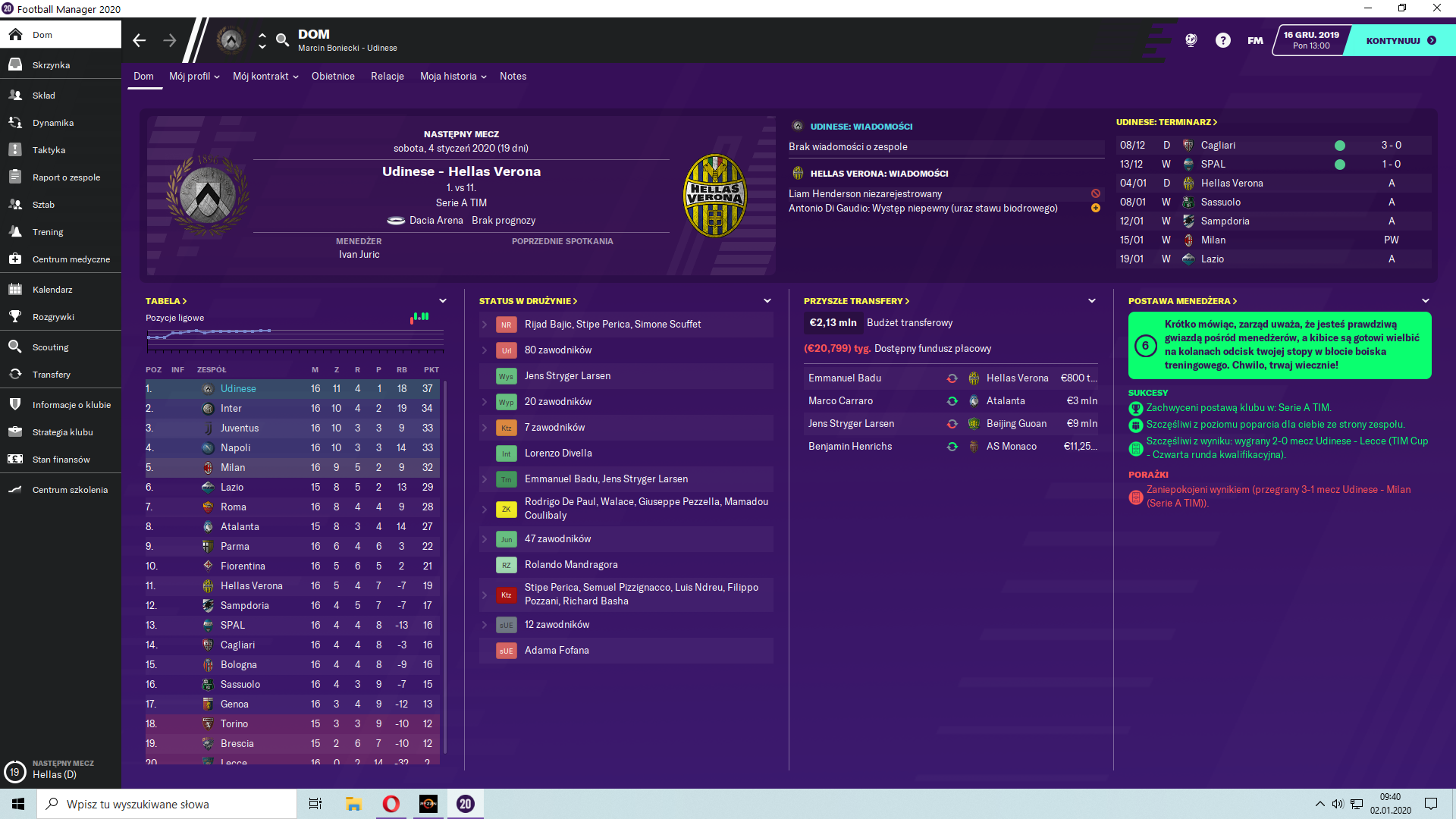 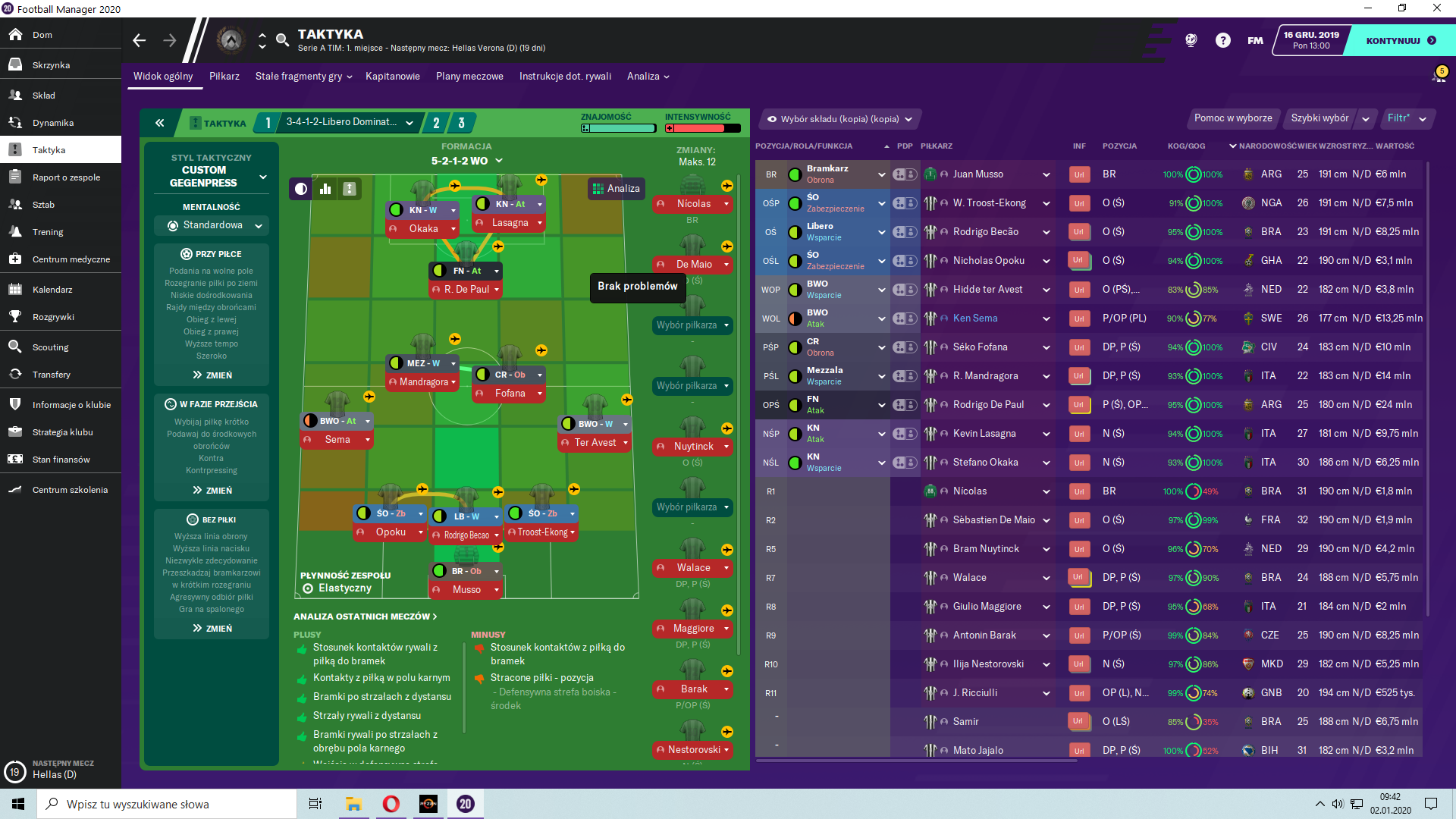 352 seems to be the way to go this year. But this looks like it’s performing miracles! I really want to try this later
Reactions: Ped, Babemocni1988, vujevic and 1 other person
K

MediaFire is a simple to use free service that lets you put all your photos, documents, music, and video in a single place so you can access them anywhere and share them everywhere.
www.mediafire.com

Download button is there now - I've added it as a resource in this cicrumstance and managed to link this as the discussion. In future though make sure you use the post a thread/resource button in the top right corner of the forum stops the disconnect from happening.
Reactions: Babemocni1988 and vujevic
J

Fantastic tactic! Doing really well for my Norwich and Parma. IMO, this is much better than Wufeng sword for weak team.
Reactions: vujevic and Babemocni1988
D