Allardyce Sacked!
Sam Allardyce was sacked earlier this morning reports can confirm after the new Blackburn owners Venkeys wanted their own manager. Also this morning we can confirm Assitant Manager and First Team Coach have left the fans are shocked and even the players are shocked. This is Blackburn Midfielder David Dunn just a few minutes ago saying "im stunned we cant believe it just about to come into training and we find this out whats next for Blackburn"

Well already Bookmakers are saying there is only 2 canditates, 1 is Martin O'Neil and the other is Blackburn Legend and former Premier League winner Alan Shearer. Tommorow Venkeys will hold a press conference to tell us the new manager but already Blackburn's in the headlines 2 months before the season starts. 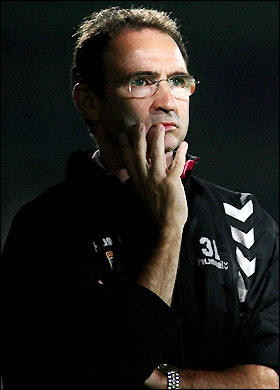 Who is the next manager of Blackburn Rovers?

looks like a great start keep up the good work
N

next update coming in next 1 hour
S

Not bad start, Should maybe make the font smaller though bit of an eyesore to read
N

ok make font smaller got it thanks for advice

Venkeys: we the owners of Blackburn Rovers would like to welcome you and announce our new manager Mr Alan Shearer!

Venkeys: From now on questions can be asked to Mr Alan Shearer.

Sky Sports: Alan how do you feel sitting here as Blackburn Manager?

Alan: Very exicted im glad to be back at Blackburn i have many great memories of obviously winning the league and i had a great 4 years here as a player.

BBC: Alan how did this come about so quickly?

Alan: Yesterday i got a phone call from Blackburn and within 5 minutes i took the job i felt this was my destiny to come back and be the manager. Obviously my first job at Newcastle didint go well and i love Newcastle but i also love Blackburn this is where i belong.

The Sun: What kind of contract have you been given?

Alan: 4 year deal which i feel is long enough to accomplish the clubs ambitions.

The Sun: what are those ambition?

Alan: In 4 years time i want Blackburn to be competiting for the title it is as simple as that but for this season it is to finish mid table and maybe try to win some silverware.

Sky: How much have you been given to spend and will you be bringing in your own staff?

Alan: At this moment Blackburn cant go out spending big money we may have to use the loan market. I dont want to sell any player as well not even reserve team players this group needs to be kept together. And for the staff i will be bringing in my own staff in the next few days.

Venkeys: That is all no more questions

So the Blackburn era under Shearer has begun and in 2 months time we will see his first competitive game as Blackburn host Man Utd as Shearer faces Ferguson.


8th June: First training session with the lads and they all seem up for it we have good players who i feel could acheive top 10 finish i look and see my key players like Morten Gamst Pedersen, Chris Samba, Ryan Nelsen and Paul Robinson i see unity and a real passion to work hard to get in the team.​


This is the unity im looking for Picture Above​


Obviously looking at these matches the only really tough test is Inter while others are winnable i hope for at least 3 wins out of 5.​


I belive in 4-4-2 i really do and i believe we need to find the best partnership out of Jason Roberts, Benjani, Nikola Kalinic and Mame Biram Diouf i will try all four and the two best will play vs Man Utd​


And the new Assistant is none other than Shearers former strike partner Chris Sutton former manager of Lincoln Sutton said he was delighted to work with Alan and be back at Blackburn.​ 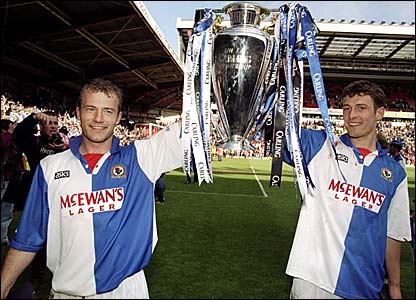 S and S is back Shearer and Sutton Pictured Above​


So Shearer has a busy few months ahead and next update we see all Pre Season results and maybe a few signings hopefully and the big preview towards the Super Sunday Showdown between Shearer and Ferguson as Blackburn face United at Ewood Park!​

decent work so far,
try putting in some screenshots and fixing the layout
N

Great start. Shall be keeping an eye on this.
N

cheers lawton10 and theres nothing wrong with following sunderland lol

next update around 09:00 am on saturday to about 10:00am thanks for the support so far
T

nufctillidie said:
ok will try to fix layout and put some screenshots in no problem when is your next porto update im really enjoying it
Click to expand...

idk mate, trying not to over update,
so maybe in a week or so
N