FM20.2 A 352 for Premier League to non-League, Favourite OR Underdog. (plus Training Schedules) 20.2 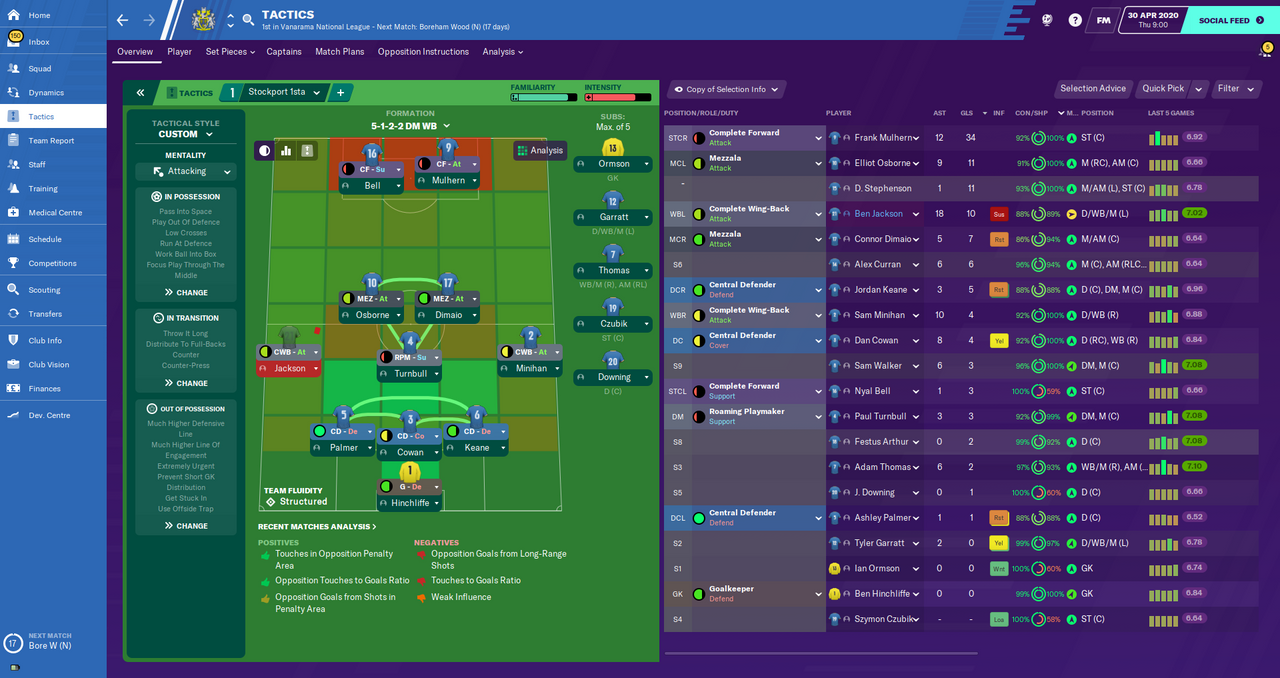 Whilst v1 of the tactic (kindly posted by hepek) was fit for purpose in terms of achieving high levels of over performance for teams with low reputations for their divisions (underdogs), myself and a few others noted that once your ‘reputation’ caught up with you a bit and some teams began parking the bus against you we would struggle to break these teams down resulting in a frustrating pattern of play where you would often beat the better teams in the division yet lose or draw to the weaker teams who ‘sat in’ against you.

Over the course of a career your ‘standing’ will fluctuate and you will face varying levels of both scenarios. This can be handled by running 2 tactics and selecting the appropriate one (which I can’t be bothered to do) or creating a tactic flexible enough to handle both situations, the latter of these was my objective here.

Being a manager who likes to plug and play 1 tactic and concentrate more on man management and player/squad development I was after something that could win the Premier League well with Man City where you are constantly playing against massed defences yet also win the National League with Stockport County where you are tipped for relegation and would be relentlessly attacked.

If I could achieve these 2 extremes we should be able to handle everything in between as we move through our careers. 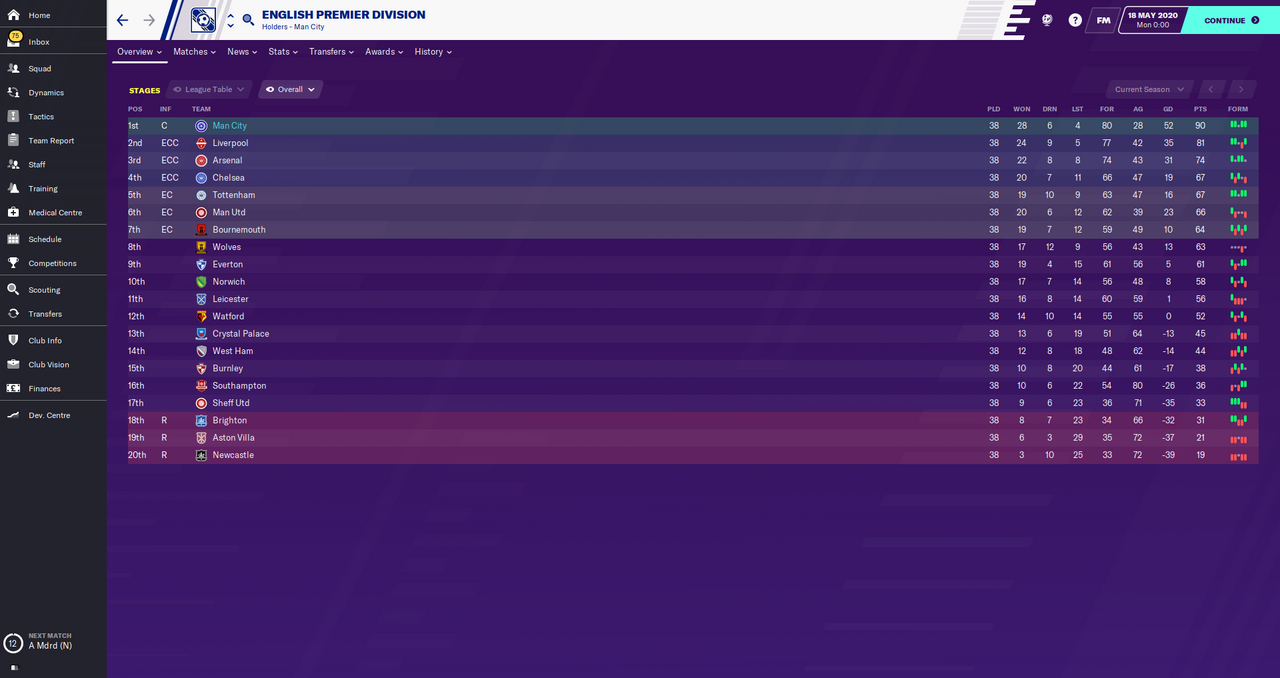 A solid season for Man City, sure there are higher scoring tactics for Top Teams out there but they are unlikely to translate well to weaker teams, this is based on sound defence with enough going forward for our attacking players to express themselves well. This was a ‘holidayed’ result so expect better with good management. 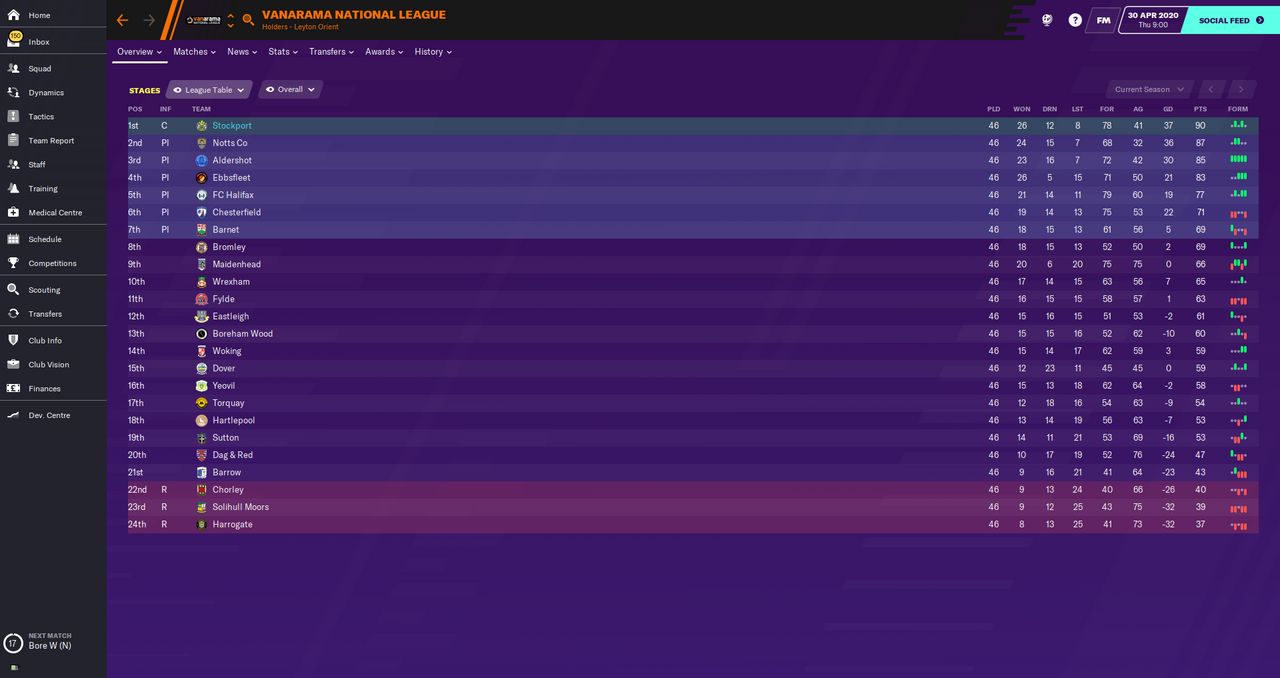 At the other end of the scale Stockport enjoyed a strong season able to punish teams overcommitting against them, grabbing the 1 automatic promotion spot despite their media prediction of 24th and DEAD LAST.

So mission accomplished, but what’s changed tactically from the original tactic?

Essentially, only the set up of the forwards. On the original tactic we had 2 attack duty strikers set up to run in behind teams who over commit, simple yet effective until you run into teams who are parking the bus where this fails to work. Instead we now employ the much more nuanced play of the Complete Forwards, one on support, one on attack duty who involve the rest of the team much more in attacks, playing with their back to goals during sustained possession, linking play in a much more patient manner allowing the creation of quality chances even against massed defences. Crucially they are still extremely effective on the counter when a more direct approach is still required, giving us a tactic versatile enough to handle all match situations.

The use of Demanding Roles is lower divisions.
I often see comments from people questioning the use of Complete Forwards and Roaming Playmakers in lower or even non-league. There is the common misconception that the names given by SI to a SET OF TACTICAL INSTRUCTIONS is actually a description of the TYPE OF PLAYER you need when its clearly not. Yes, Harry Kane could be described as a Complete Forward and there are not many of his quality around, but IN GAME it refers to a set of Instructions & Behaviours only, Frank Mulhern is a run of the mill non league Striker, he had no problem fulfilling the role of a Complete Forward in game. 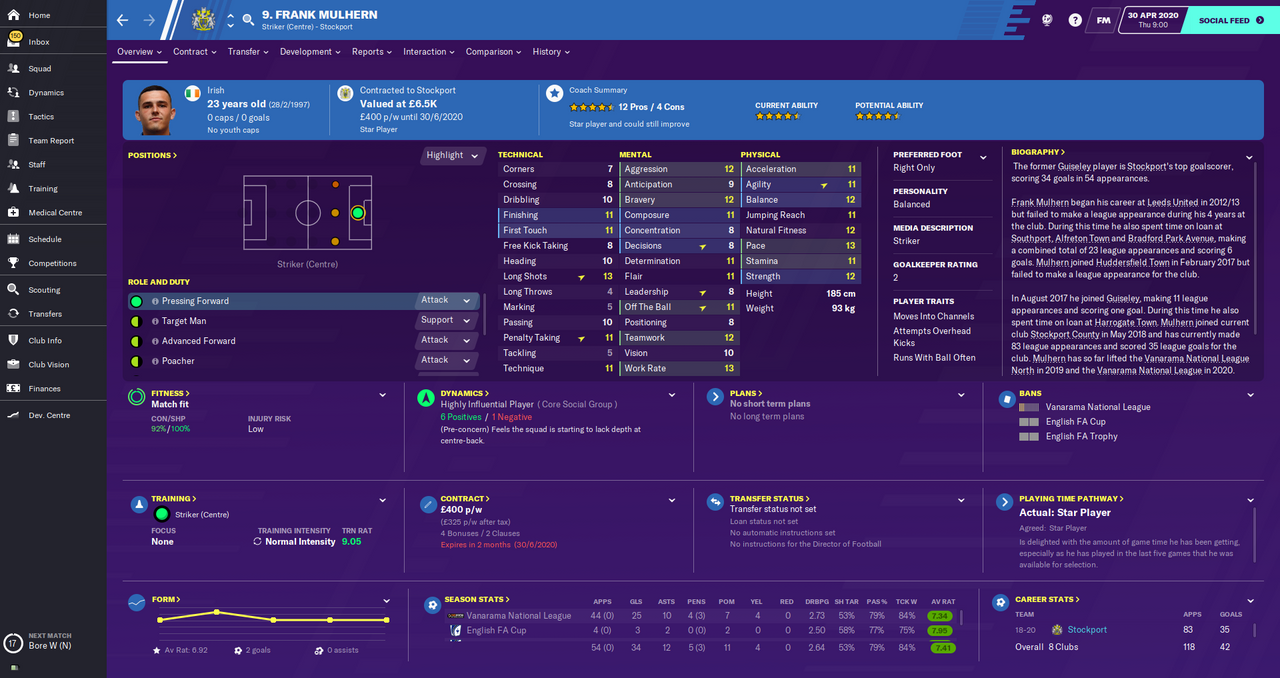 
TRAINING
This year I am employing the same tried and trusted training schedules from last year namely;

PRE-SEASON should be employed immediately upon the players return for a new season until the week before your first competitive match. It is designed to recover physical attributes lost during the off season, build team morale, and improving conditioning and injury resistance for the main season.

MATCH WEEK should be employed in any week where you have 2 OR MORE games. Pursuing player attribute development is pointless during these weeks, instead its all about recovery, conditioning and arriving on Match days in the best physical and mental shape possible.

DEVELOPMENT WEEK can be employed if you only have 1 match this week leaving a run of training days to work on coaching and improving players whilst still gearing up for match day.
Reactions: McBurns and Danwolf