Download
Overview History Discussion
I tried this with Union Berlin and finished 10th but I start to use this one in late December. So far the best tac I found. I played on patch 2.1.4 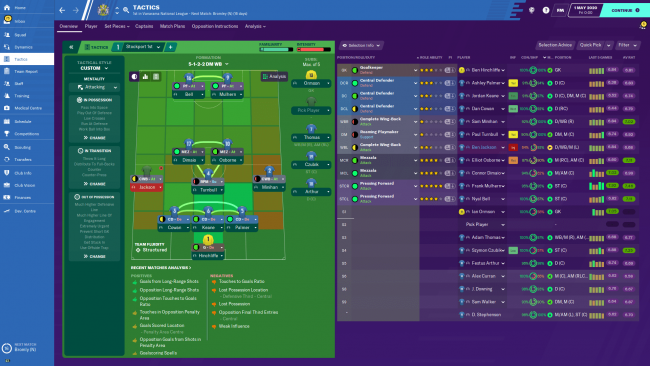 here is link with an explanation from Mr U Rosler himself:

The FM2020 tactic is more suitable for underdogs.

Its intrinsically easier to beat teams that ‘attack’ you, than those that sit in and defend, even though when dealing with teams sitting in you have better players warranting your higher reputation.

Either way, I’m happy as I’ll be underdogs during most of my save as I push up the leagues.

Not tried this at Premier League level or leagues around the World so can’t comment on that, however attacking, semi direct, aggressive tackling & pressing, high up the pitch tactics like this tend to do well universally although only having 1 wide player on each flank hasn’t been a great way to go in recent years.
Click to expand...

Team instructions
'Work ball into box' is an option to increase and make better use of your possession as you'll be dealing with teams sitting in most week.
'Play through the middle' is another option as it will 'push up' all the midfielders into even more advance positions, Elite teams could get away with this.
But this years ME is very sensitive to change, one different Team Instruction or player role can throw the tactic, so maybe one tweak at a time.

What to do with your talented, attacking, wide players.
Pretty much all of them can be retrained as either Strikers, Mezzala's or as you suggest Wingbacks dependent on there strengths and weaknesses.
Balance is key, and you don't want too many of the same type of players. I wouldn't want 2 'wingery' mezzala's for example.

Team Building
I follow a few universal rules aimed at ensuring we have no mental weaknesses in the team which can lead to inconsistent performances or long, avoidable runs of poor form.
Key attributes I look for before signing any player are Determination & Decisions.

Even with Stockport in the National League I’ll never sign any player with less than 10 Determination and 10 Decisions. By Championship Level I’d want a minimum of 12 in all players. Elite Premier League teams I’d push this to 13 or 14.

The thinking behind having a highly determined squad should be obvious, resilience to come back from setbacks both during individual games and for lessening the impact of low morale during any poor runs of form hopefully enabling you to break out of them earlier.

In terms of decisions, I saw some testing which indicated that Decisions was one of the KEY attributes underpinning all other attributes. A low Decisions attribute seem to negatively impact many elements of player performance in the match engine, to my mind that cannot be ignored and this is now key to my approach.

The Final pillar is consistency, although this is a hidden attribute and therefore invisible, I always check player weaknesses on the scout report and will never sign any player noted as ‘inconsistent’.

Having established a basic mental baseline for the types of players we will recruit, we can look in more detail at wider recruitment.
How much you can reasonably expect to get from a player depends on the level you operate. I work to the following priorities.
PHYSICAL > MENTAL > TECHNICAL

So in the lower leagues I look to ensure my team is highly Physical, being fitter, stronger and faster than your opponent is enough to get the job done here. As I move up the league and recruit replacement players I ensure that the Physical requirements are still being met but now I’m layering on strong Mental attributes, as well as the aforementioned Determination and Decisions I want high Work Rate in most positions and start to look for things like Teamwork and Off the Ball.

Once I hit Championship Level and I bring in new recruits, I’m now looking to add Technical skills onto our player recruitment profile delivering us complete footballers. Which technical skills will depend on player roles and tactics.

Player Roles & Attributes
Pressing Forward/Attack
On a basic level we are looking for hardworking, highly mobile strikers who can harry the back line when out of possession and make runs into dangerous areas when we are in possession, pulling defenders out of position whilst seeking spaces where they are hard to pick up. On a higher level we are then looking for players who can make the most of the chances they get as well as being able to set up their strike partner and team mates.

All Levels
Work Rate
Off the Ball
Acceleration

Mezzala/Attack
Again, in simple terms we are looking for good athletes here with an appetite for hard work. When in possession they make a lot of runs, in to out as they move up the pitch. They will certainly rack up the KM in your data reports. Once you get to the top leagues the fun starts as you can layer in some nice technical skills to make them more effective in the attacking third.

All Levels
Work Rate
Off the Ball
Stamina

Roaming Playmaker
This is our Joker in the pack, whilst our entire attacking system is built around movement, lateral much of the time following an ‘in to out’ pattern, our Roaming Playmaker breaks the lines vertically. To use NFL parlance, both a Quarter Back at times, pinging passes around, but also a Running Back marauding upfield both with and without the ball, extremely difficult to mark.

A genuine creative force in the team, whilst he will cover a lot of ground, employing 3 Centre Backs means he doesn’t have huge defensively responsibility and is free to roam.

All Levels
Work Rate
Off the Ball
Passing

Complete Wingbacks
Monster athletes required here. Largely having sole responsibility for the flanks, in both attacking and defensive phases, they will be up and down the pitch all day long often covering 15km in a game. Once you have the basic physicals covered you can add rudimentary attacking and defensive attributes to enhance their contribution to the team.

Central Defenders
3 is the magic number here, a solid foundation for our defence meaning that even when we are caught out of position with the rest of the team up the pitch, we still have 3 defenders in place at all times. Whilst they need the strength and aerial ability to do the basics, they need to have good positional sense and ideally the pace to recover from any errors.

Goalkeeper
The tactics weaknesses mean we need to focus mainly on dealing with balls over the top and set pieces. Outside of that we need someone who can remain focused when not involved in the game so they are ready to deal with things that do come their way.

All Levels
One on Ones
Concentration
Aerial Reach
Reflexes
Handling
Command of Area
Reactions: DeryckW, BIFFAN and hal107