Download
Overview History Discussion
Welcome guys to my 4-1-2-1-2 Unbreakable Diamond Tactic which focuses heavily upon counter attacking, defending well and outscoring your opponents whenever possible in order to win games!

I initially created another 4-1-2-1-2 Narrow Diamond Tactic a few weeks back, but I have since adapted this and now the new Unbreakable Diamond here is its successor and in my opinion is far better then ever!

I used this tactic in a personal Glory Hunter-Type save with Atalanta and also tested this tactic in FM21 in a simulated test saves with Liverpool and have even been using in my Norwich City stream save over on Twitch!

To help explain the tactic and how it works as well as all the results of my various played and simulated saves, I created a tactics video over on my YouTube channel LSPLaysFM! You can find the video below:

The tactic is a Narrow 4-1-2-1-2 Diamond formation and does rely upon its athletic wingbacks, an advanced forward who is either very pacey and/or good off the ball and then a Deep Lying Playmaker to sit in front of the defence when your Wing Backs push up in attack and who is preferably a very decent passer of the ball in order to help build attacks from the back with their range of passing.

In every save each team has performed very well, both equally as good defensively often having the best or one of the best defences in the league as well as the best attack! In the case of Norwich & Atalanta both teams have also performed arguably far above expectations. On top of that, in each of the completed saves I have tested it, the Golden Boot winner has come from the side using this tactic (Mohammed Salah & Musa Barrow).

As I have stated this tactic does phenomenally well offensively and focuses mainly upon counter attacking. However just because of that, does not mean that the tactic doesn’t work for big teams, because as shown by my Liverpool test, it most certainly does work for teams of any real size. 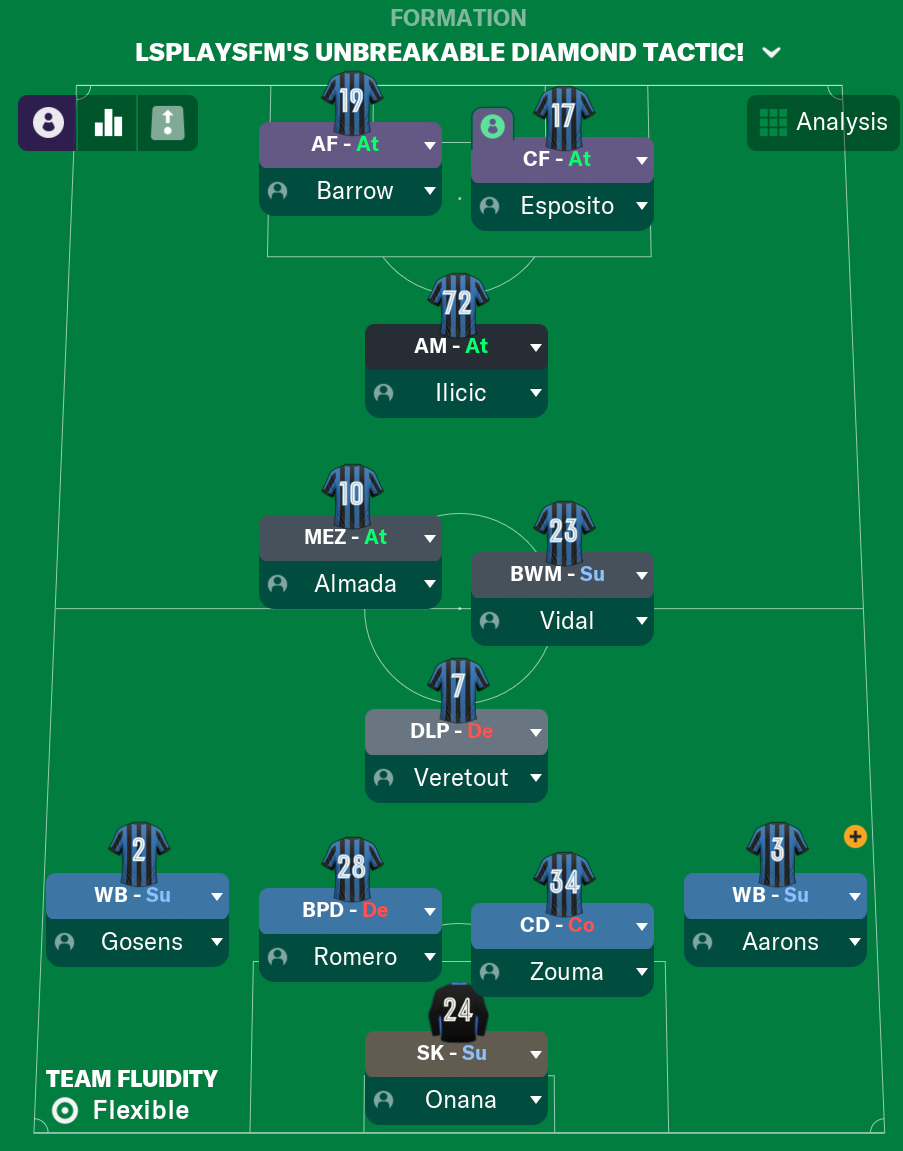 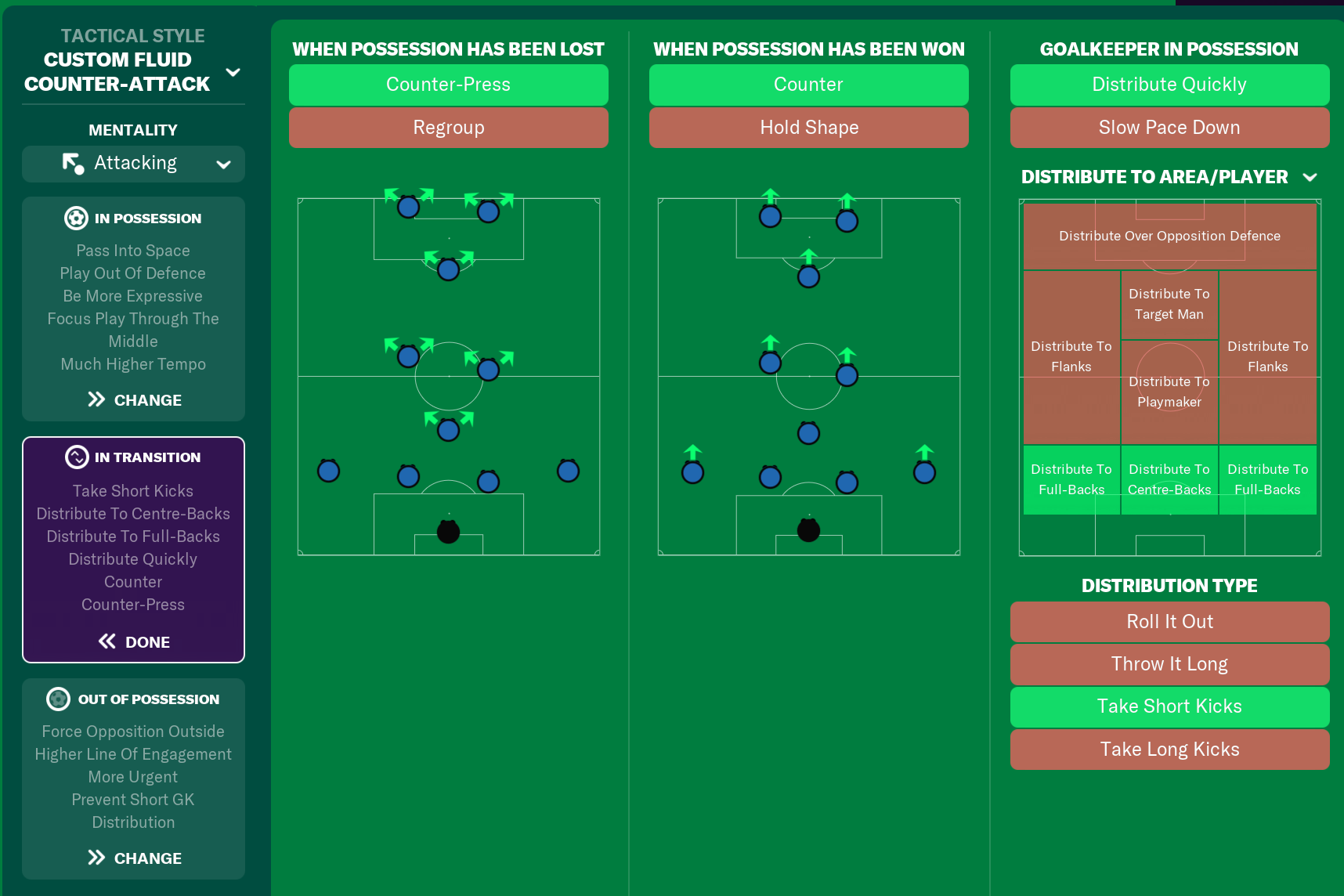 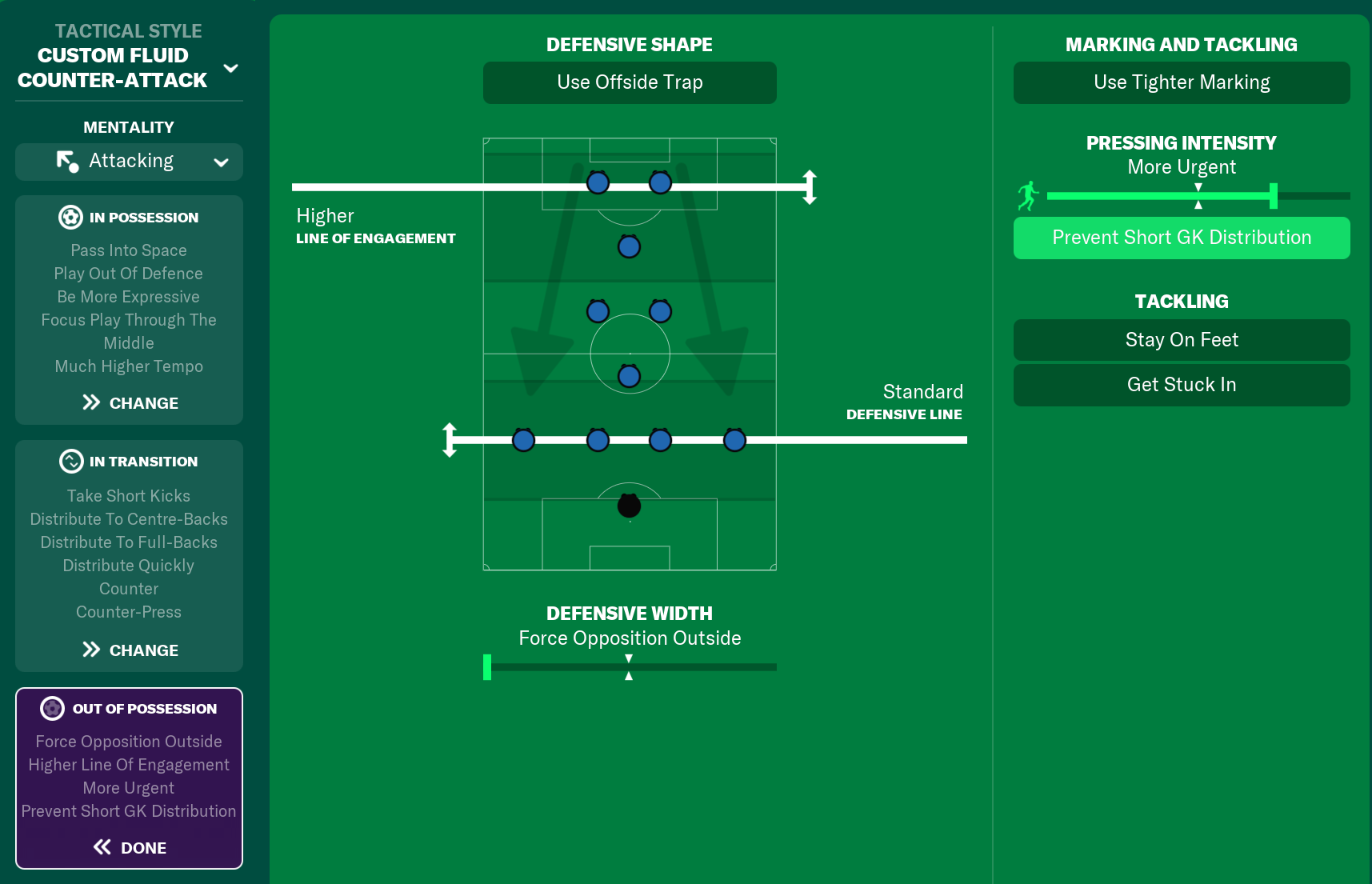 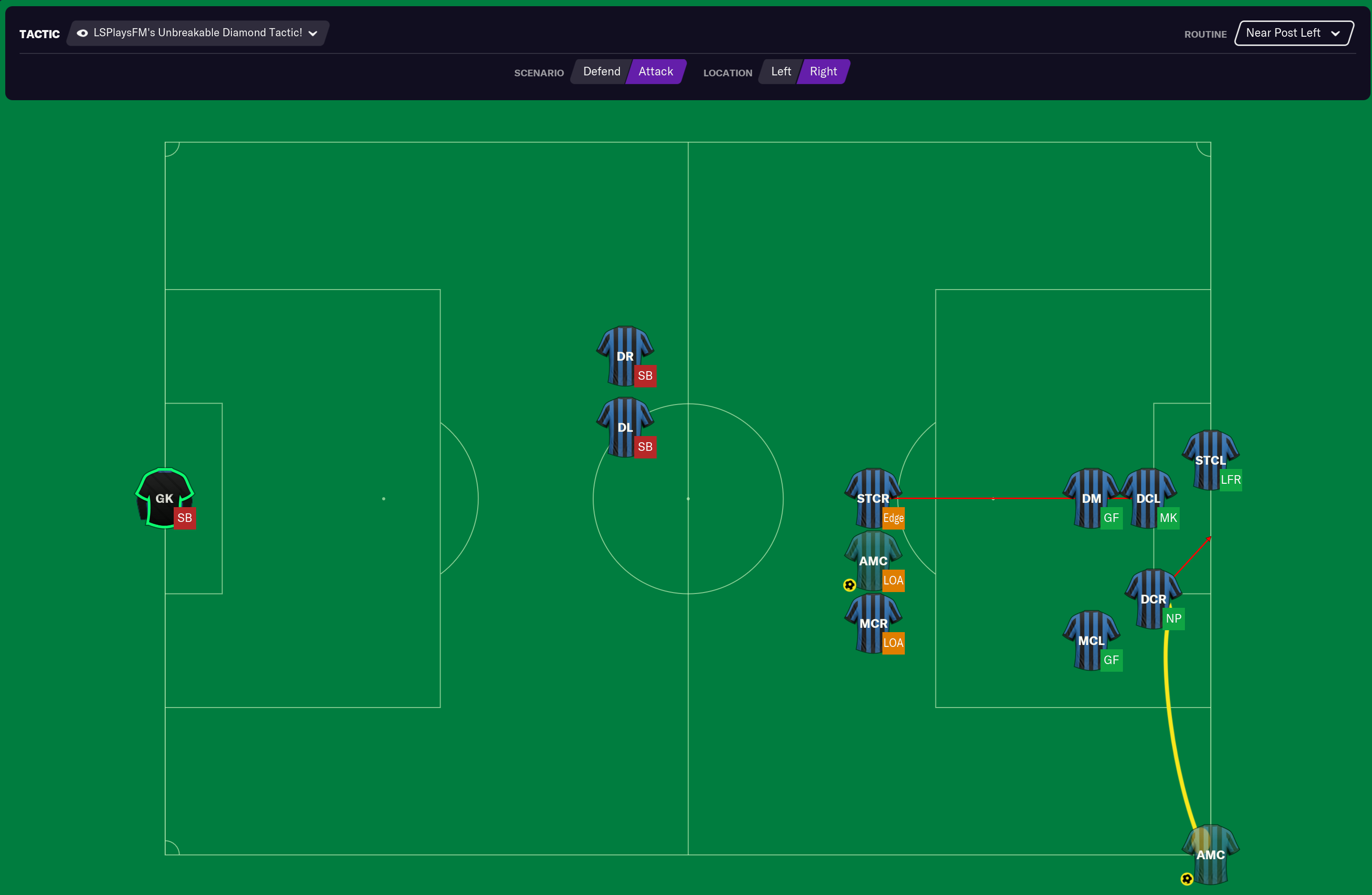 Just so you are aware with all other Set Pieces these are simply set to the default options as I found they worked suitably well for my sides, should you want to adapt them then feel free as doing so may make the tactic that much more powerful!

Also in addition to this, my training and opposition instructions are simply set to be handled by the Assistant. In terms though of player instructions, these are all entirely left simply to the defaults that each role provides the players with. I have not personally adapted these so again this may be something you look at improving yourself, but when using the tactic, not touching the instructions I have found to work perfectly well.

Using this tactic at Atalanta in my personal offline save we managed to finish comfortably as winners of Serie A in what is now our third season. We finished the season up on 100 points, with 31 wins, 7 draws and 0 defeats after going unbeaten and actually breaking the Serie A record for games unbeaten now sitting currently on 62 games without defeat. In addition to this we also had the best attacks and defence in the league with 111 goals scored and only 21 conceded. Finally, using the tactic we also reached the Champions League Final sadly losing in ET to Man City and even had the golden boot winner in Musa Barrow scoring 41 goals in Serie A in only 35 games! 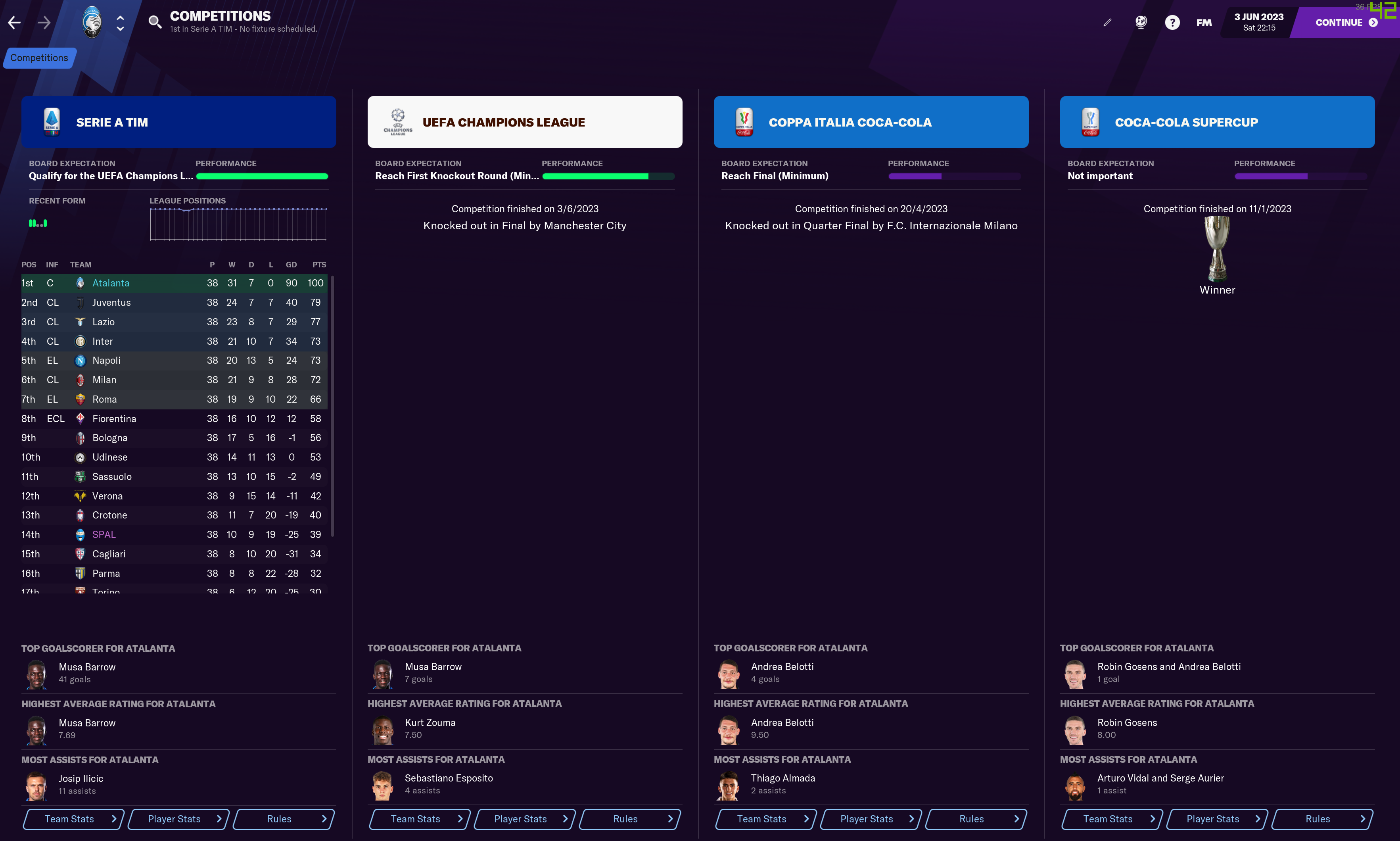 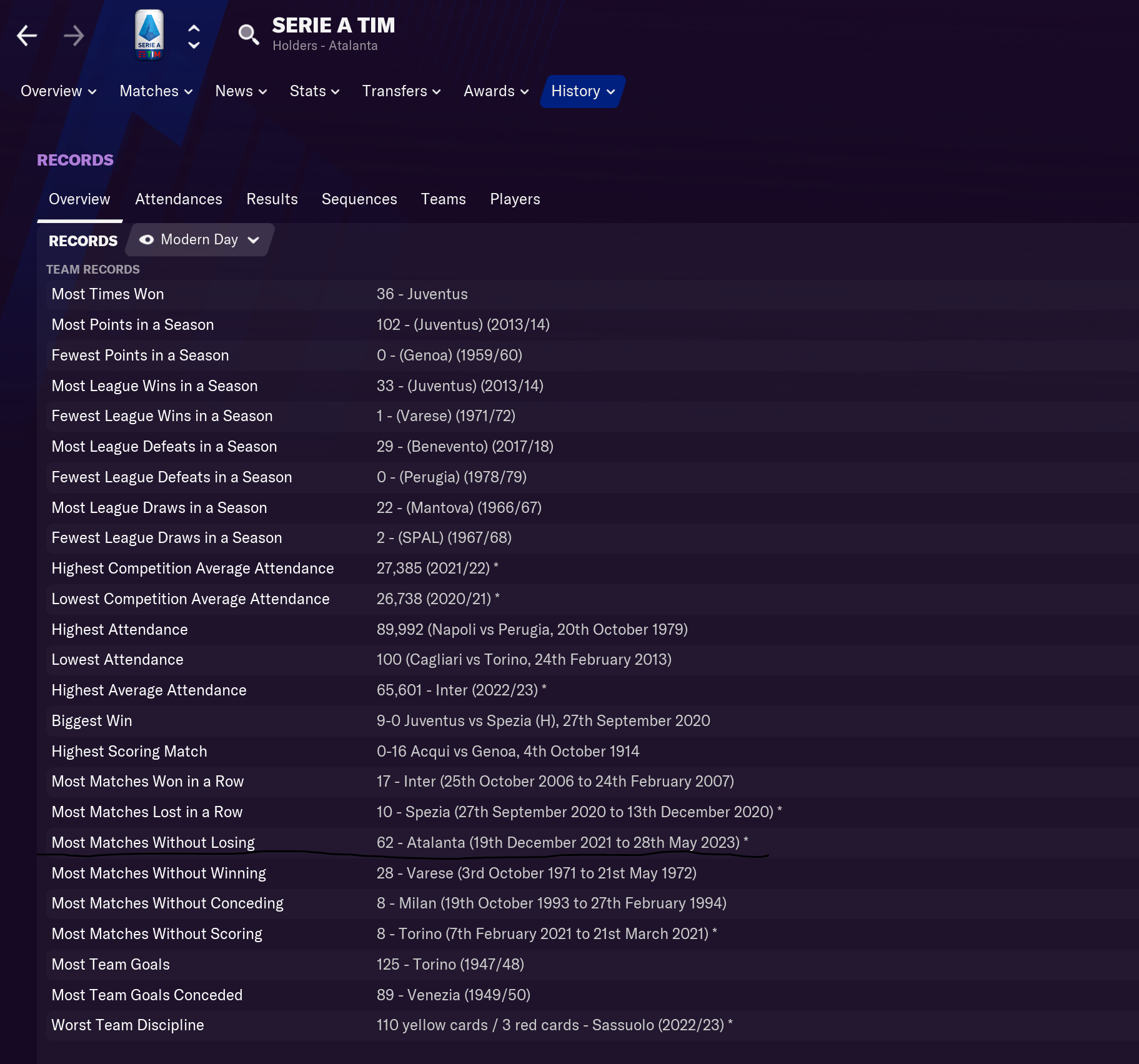 Below your also find the analyst stats for my Atalanta side. They were far and away the best offensively and were even more impressive It was also the case across both of my other saves with Liverpool & Norwich City (which I’ll come too shortly). 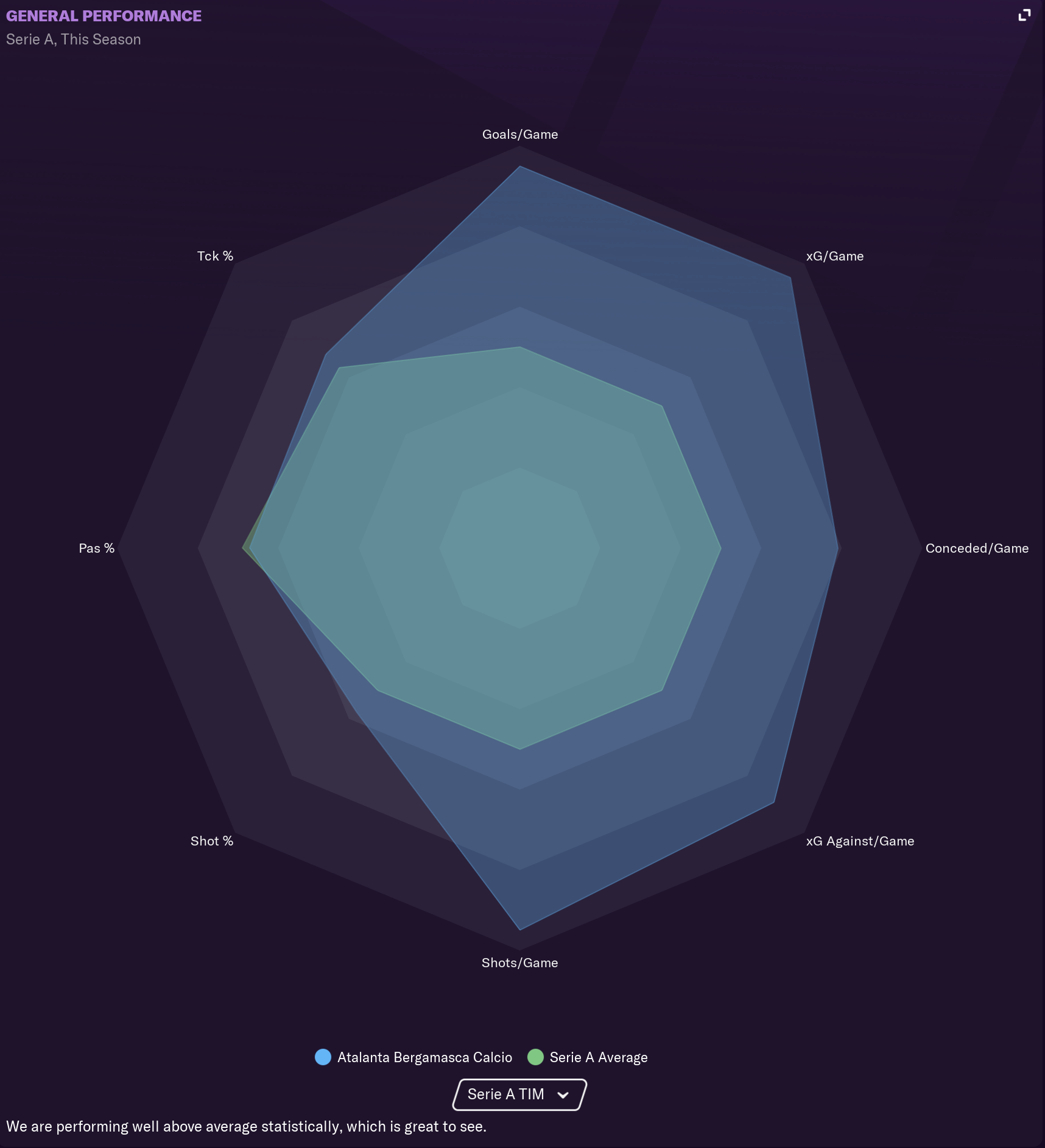 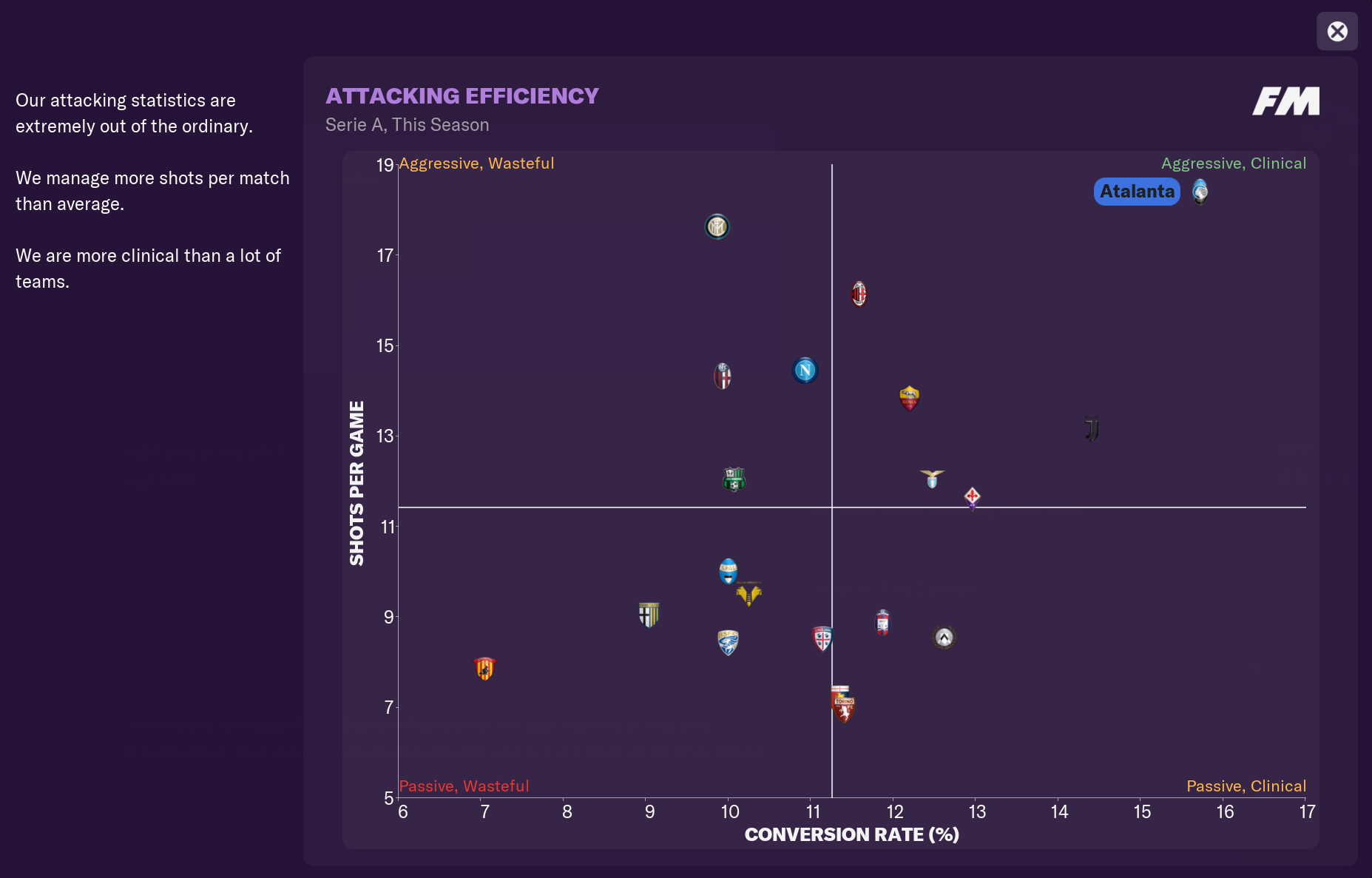 After the success with Atalanta, I then tested this out with Liverpool and have also been using at Norwich City on my Twitch stream. With Liverpool, I used them so I could test and see how a different side, arguably a league favourite would perform using this. You can see how the Liverpool side mainly lined up below: 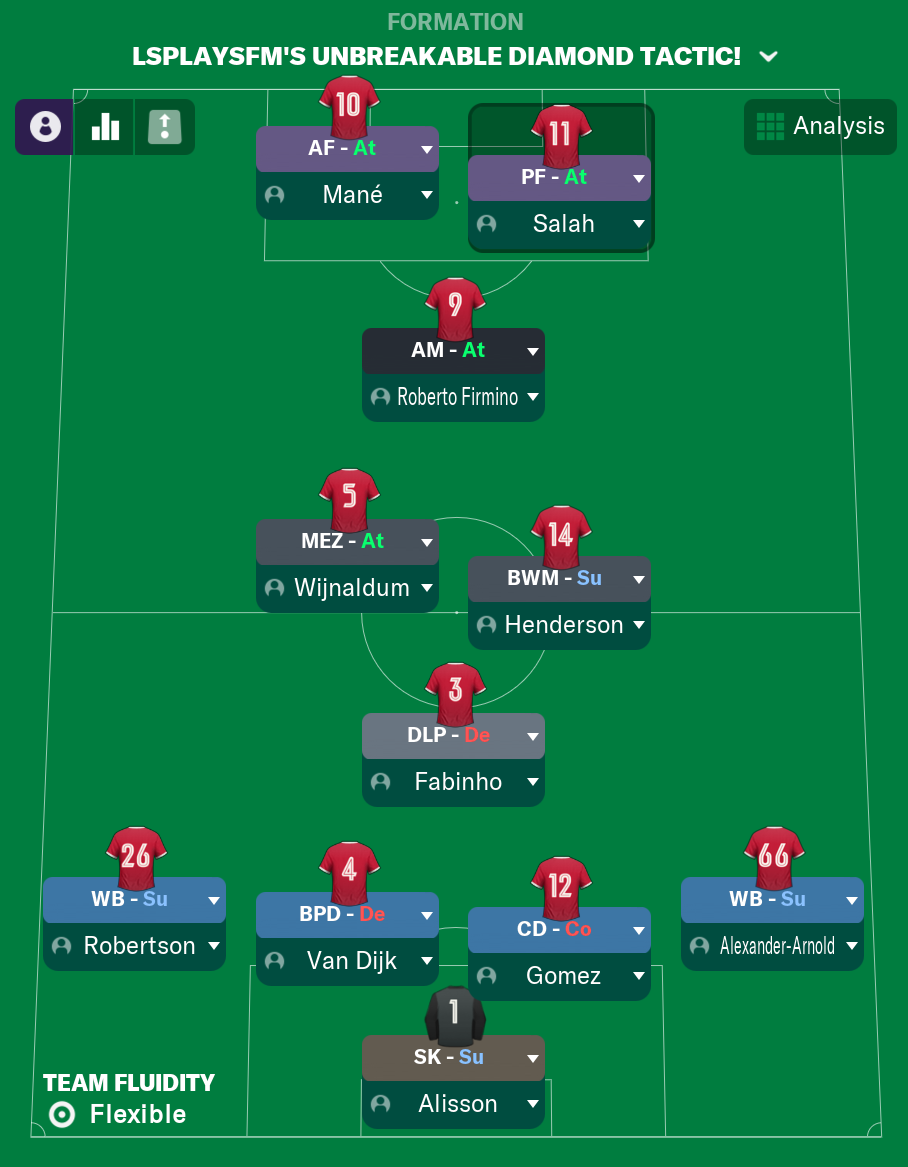 Using this tactic, Liverpool won themselves a treble (or kind of a quadruple if you include the glorified friendly that is the Community Shield). Liverpool won themselves a Premier League, Champions League and League Cup. They also managed to reach the FA Cup Semi-Finals however were defeated by Wolves at this stage. The squad though not only performed well as a team, but individually, Mo Salah had possibly one of the best ever season performing at crazy good levels, scoring 63 goals over 58 games and even being awarded the 2020 World Player of the Year based on his crazy season. You can see quite how Liverpool got on in their competitions and the League below as well as Salah’s insane stats too: 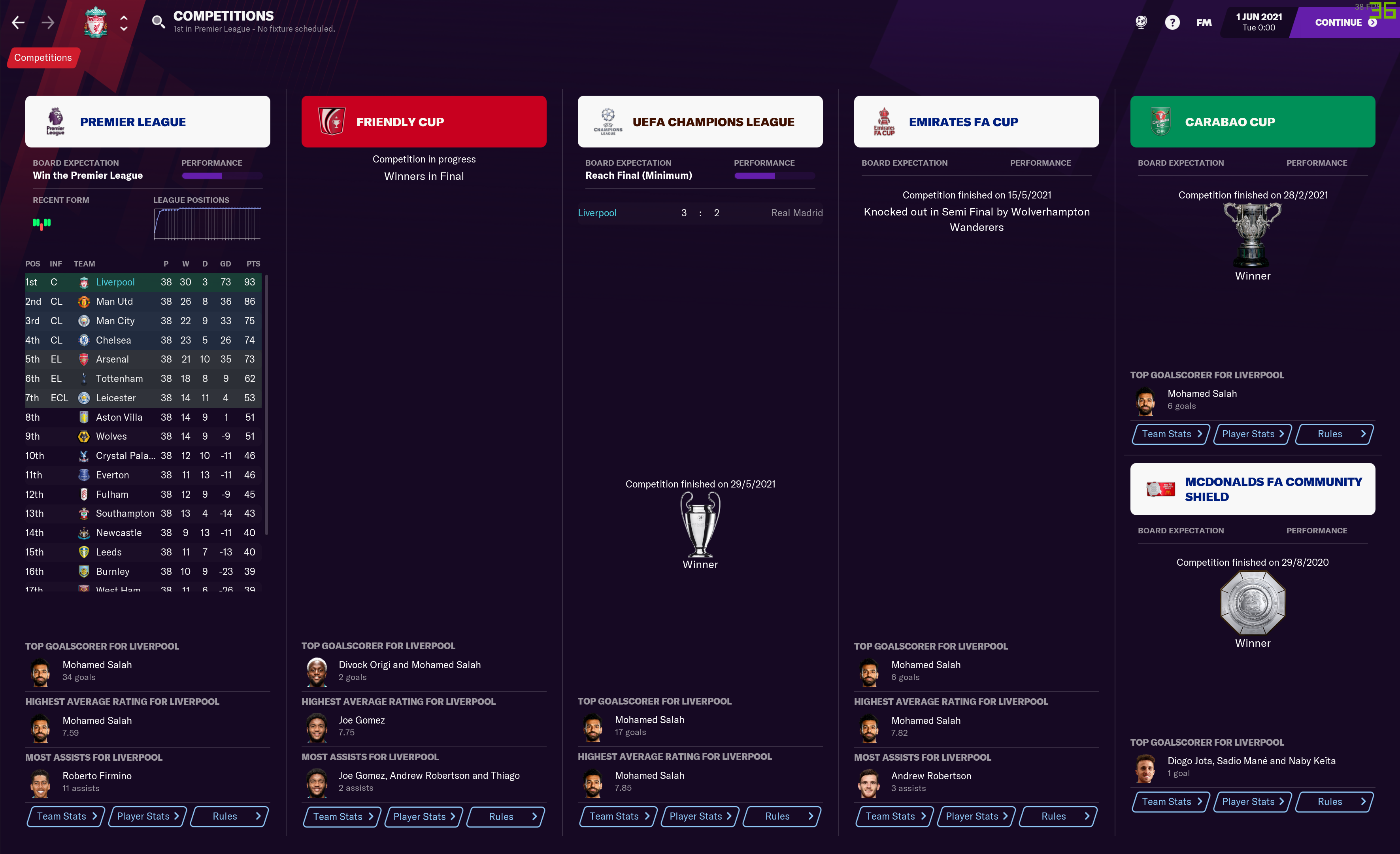 Finally after Atalanta and Liverpool’s success we also come to Norwich City who I have been using in my Twitch Stream save. In my opinion they were arguably the most surprising and craziest ones from this simulation. We have a decent team 6 seasons on, but the team was only predicted to finish in the top 6, yet after 25 league games, we are not only top of the Premier League but also battering teams for fun in both the league & Europa League! Generally speaking, our Norwich side would line up something along these lines when using the tactic. With this tactic, we sit top of the Prem with a 2 point lead over Manchester United and are 11 clear of 3rd placed Liverpool. On top of that we have both the best offence and defence in the league and in our 6 Europa League games played have a GD of 27! The side prior to this season has always been, but this year with this tactic being used, the side has exceeded even my own wildest expectation. You can see exactly how we are doing in the league and competitions we are in below: Overall that is how the tactic itself functions and across each team I used it with, it functioned very well allowing teams to either totally outperform expectations or to dominate the other teams around them and just outscore them wherever possible!


If you prefer to use Steam Workshop you'll find the link below: 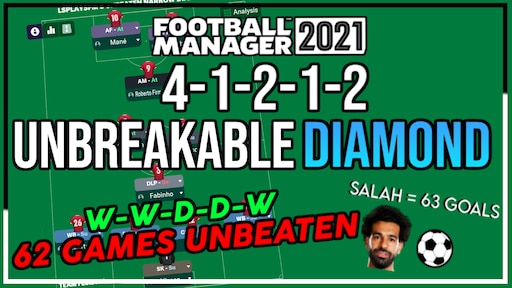 
Finally, as mentioned above with using this tactic you can also find me over on Twitch where I currently am using this tactic with my Norwich City save. I usually stream 3 times a week, normally Tuesday, Thursday and Saturday so if you like FM21, why not come join us via the link below and drop a follow on the channel.

Twitch is the world's leading video platform and community for gamers.

Hope you enjoy the tactic guys, and of course if you have any questions, do feel free to ask and please also do let me know how you get on using the tactic. If you do find it to be useful please do feel free to leave any positive feedback and do make sure to go over to my YT channel and drop a sub so you’ll be notified when anymore of my content such as my FM21 tactic vids go live.