First of all, since I know someone will ask - why Ole's tactics? I may have several answers but I'll emphasize most important ones - I'm a Manchester United fan. A huge one. I wanted to make a tactic based on some realism, and what Ole imagined he will play like during pre-season and several games into the season before key man Paul Pogba got injured. There has been much criticism of Ole this season, but the recent upturn in form (11 games, 9 wins, 2 draws, 29 goals scored, 2 conceded) has made me wonder what would've happened if he still had Pogba and Rashford to count on. Would he stick to his original tactics? Well, I did. And I must say, I have been very satisfied so far.

Let's start off with formation, and explanation as to what Ole has envisaged his team will play like. 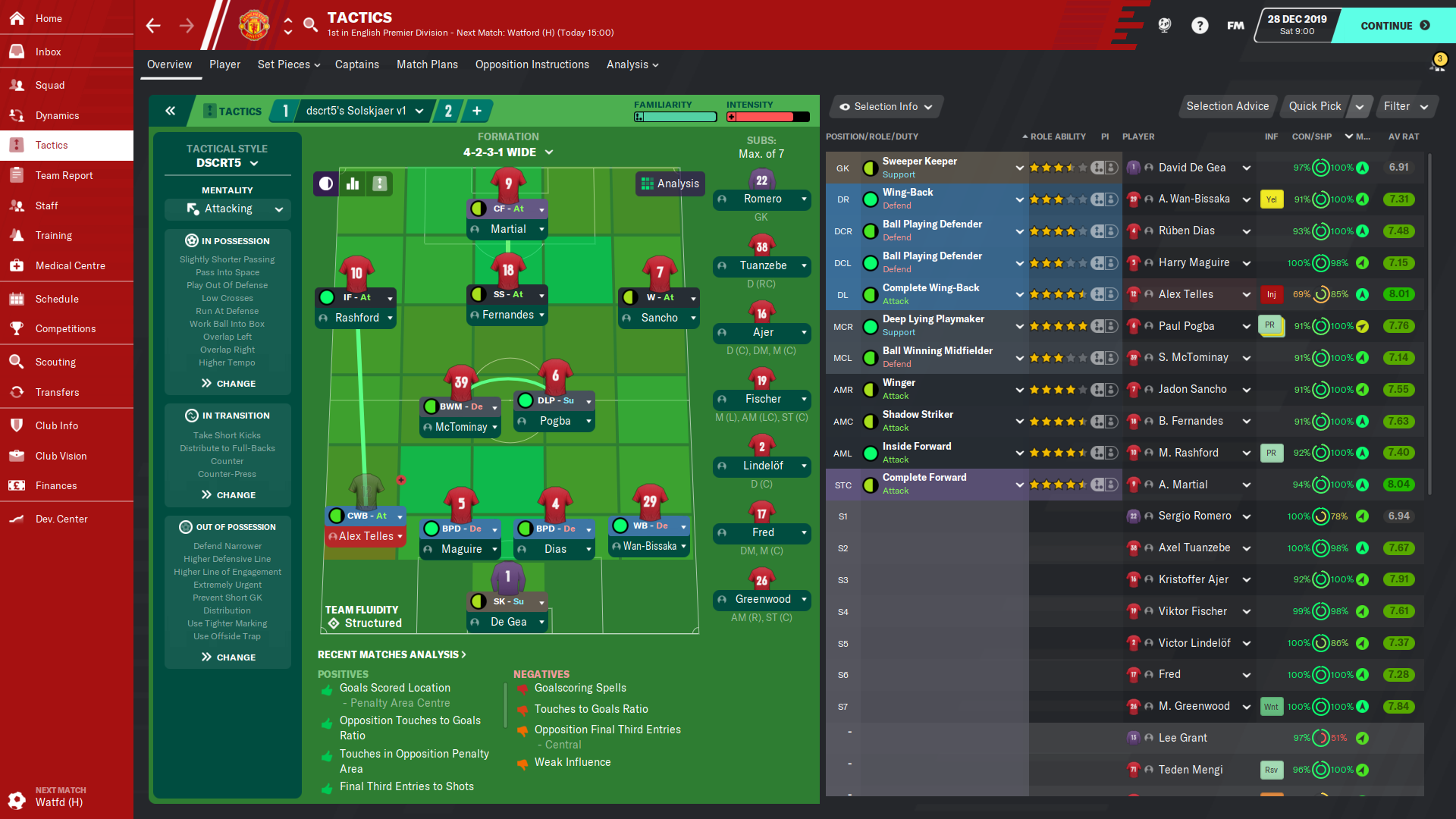 As you can see, it's a regular 4-2-3-1, doesn't offer anything extraordinary or unusual, but... what exactly was Ole's plan?
It's rather simple - get the best out of his best players, the best one obviously being Paul Pogba. Now, there are many arguments as to where Paul Pogba's best position actually is, while most people say on the left of a midfield 3, with less defensive responsibilities. So far, he has played in numerous roles for Man United, but the most effective he's ever been, regarding his influence on the game, was in his very first season at the club. 2016-17, under Mourinho. He played as a deep-lying playmaker who had licence to roam into the final third occasionally. Now, due to the game limitation, I was unable to allow him to roam so much from the position, but nonetheless, he performs excellently here.
So, Ole has envisaged to place Pogba in a double pivot, on the right side, where his marauding runs can be covered by (probably the best defensive right back in the world) Aaron Wan-Bissaka who was staying back as part of a defensive 3 alongside Maguire and Lindelof, slightly drifting into being an inverted wing back (which also due to game's limitations, I couldn't do, as inverted wing-backs always go into midfield, no matter the role). On the left side, Luke Shaw was encouraged to make overlapping runs, making their formation a 3-2-5 in attack. Off course, Luke Shaw's runs had to be covered by someone as well, that being Scott McTominay. Front four's roles were pretty straight-forward, given what players Ole had at his disposal. Rashford, Martial, Lingard and Daniel James were making a front 4, with Luke Shaw, make it a front 5.

So, in our not-so-short explanation of his tactics I have described roles, now I will describe what is a must have:
- Complete wing back on the left, someone with great crossing ability, first and foremost. Alex Telles has been killing it for me. I reckon Alejandro Grimaldo would do the same.
- Complete forward in attack, someone who can hold the ball up well, finish off chances, and jump/head as well. No matter the "low crosses" in tactic, you will always have a lot of high crosses anyway. For some reason, Martial, who probably doesn't do well in air or holding up the ball, has still done great for me. I reckon Harry Kane would be a killer in this role.
- Pacey winger on the right. You may not have to sign Sancho, like I did (or well, Woodward did upon my request, he may not be so useless after all). Daniel James, in less games, has contributed more, and had been a killer for me.

So, if you start a Manchester United save, all in all, you may not have to sign anybody in the first season. I'm fairly sure the squad you have is sufficient to win the league in the first season, barring some rotation players. Luke Shaw can maybe fill in Alex Telles' spot, Daniel James can certainly make that right wing spot his own, and where I bought Ruben Dias, you can use Victor Lindelof.

Your left winger and right winger both must be right footed. Left wing back must be left footed. The rest is optional. I didn't do much about set pieces, but I still do score a lot from them. Bruno Fernandes is pretty good at taking them, so that may be the reason.

Please note that I did not finish the season with this tactic just yet, due to time schedule being really tight, but great results and great player performances have convinced me to not wait for the end of the season, but post the tactic as soon as I find some time, which obviously is now.

Here are some of the screenshots I promised: 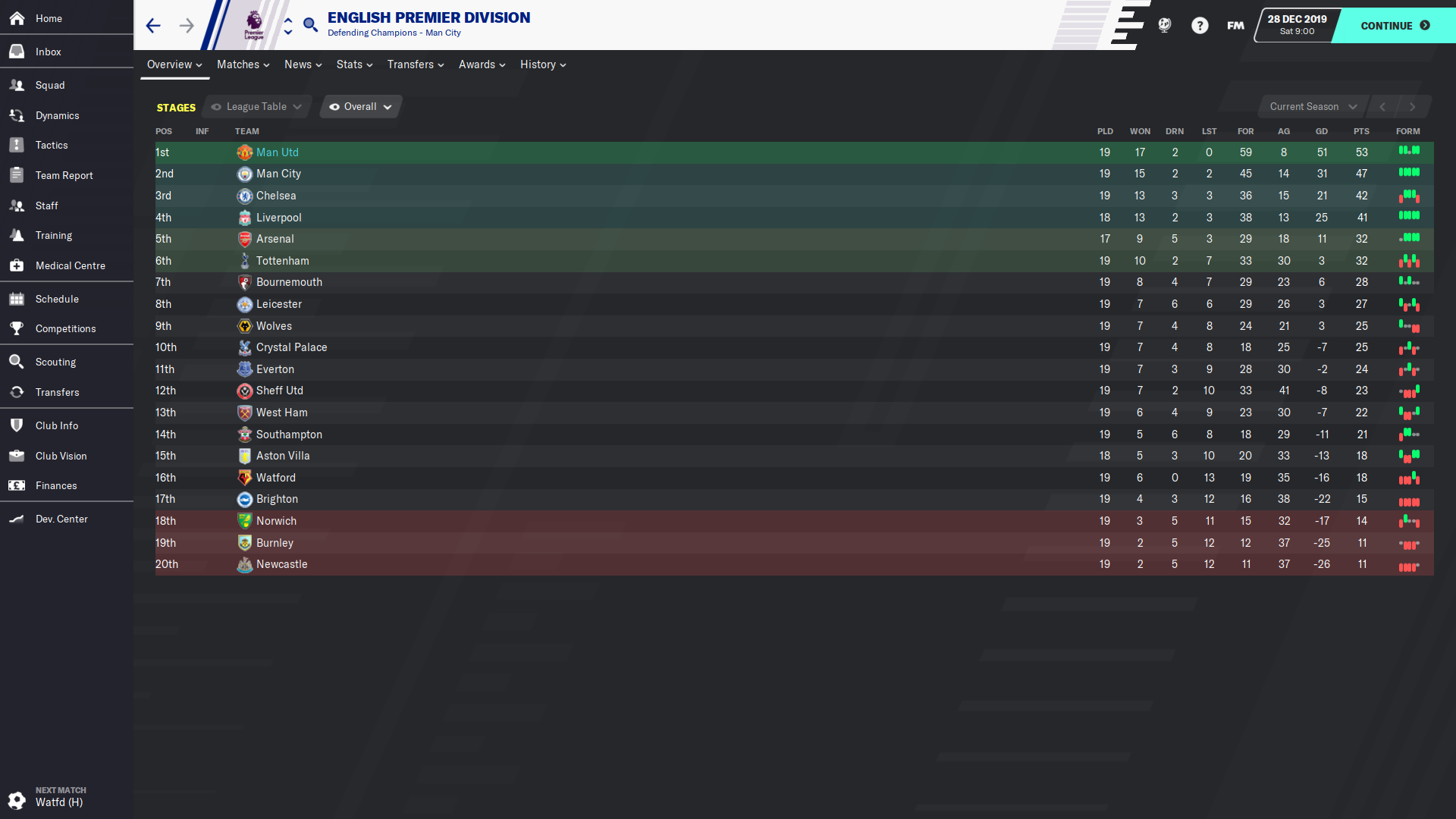 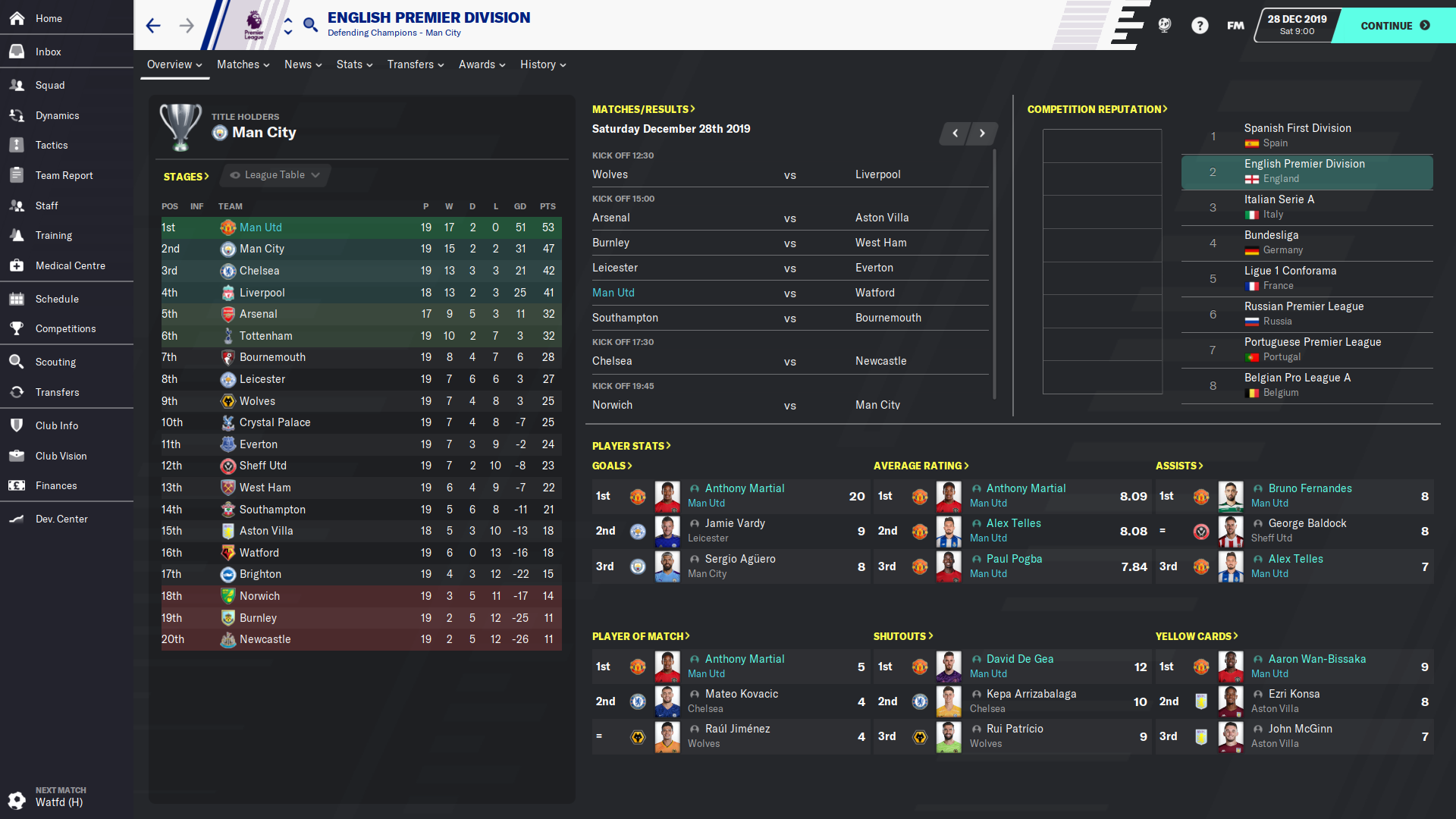 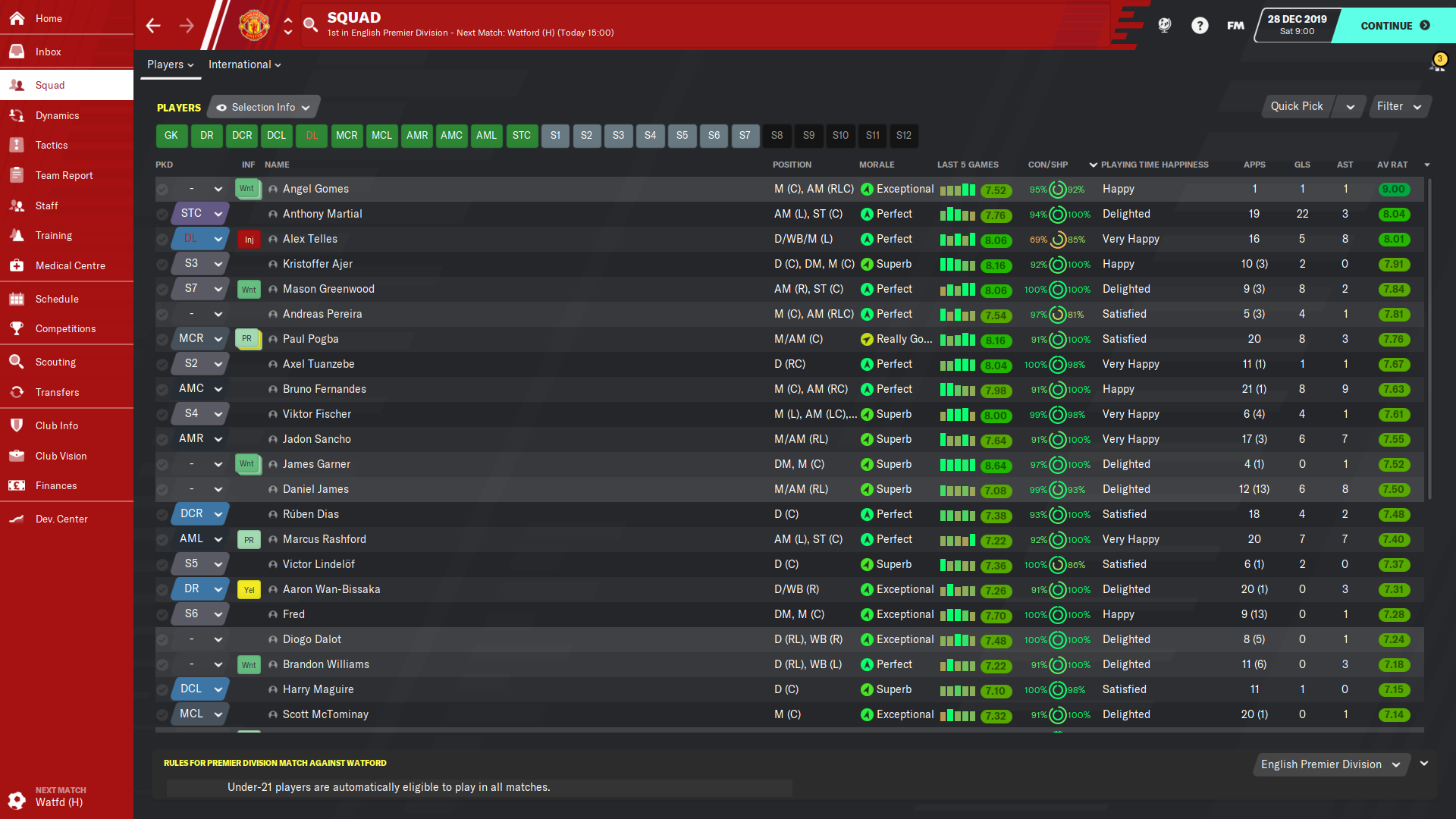 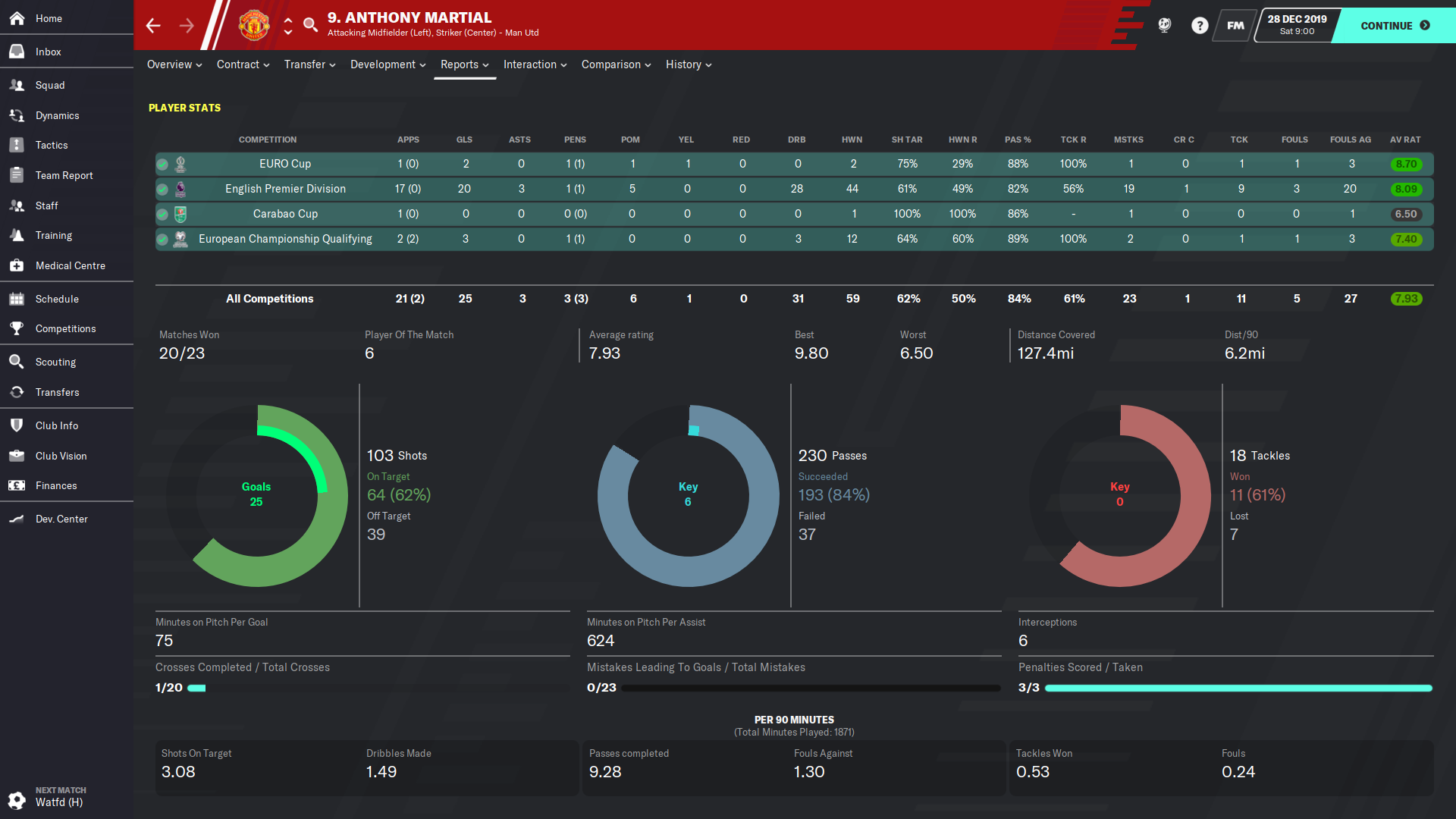 So, as you can see, the league is being rather easy. I drew two games to very tricky opponents, Arsenal and Wolves, both away from home. I had plenty of chances to win them, but I guess you can call them "one of those days".

I have also promised a screenshot of a game at Anfield where I (alongside winning the match) dominated possession. For some reason I can not enter the match vs. City so I can not show that to you either. 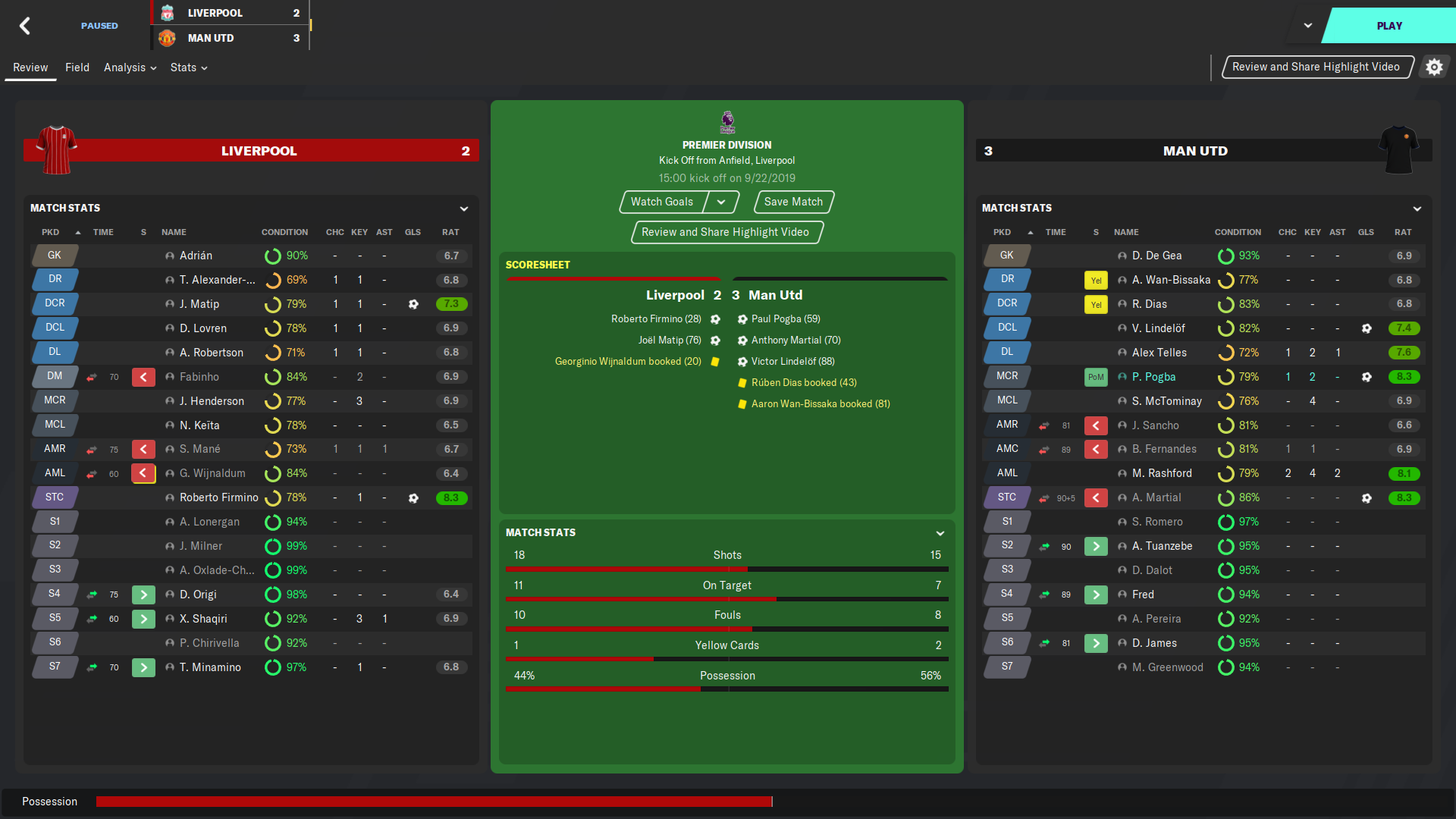 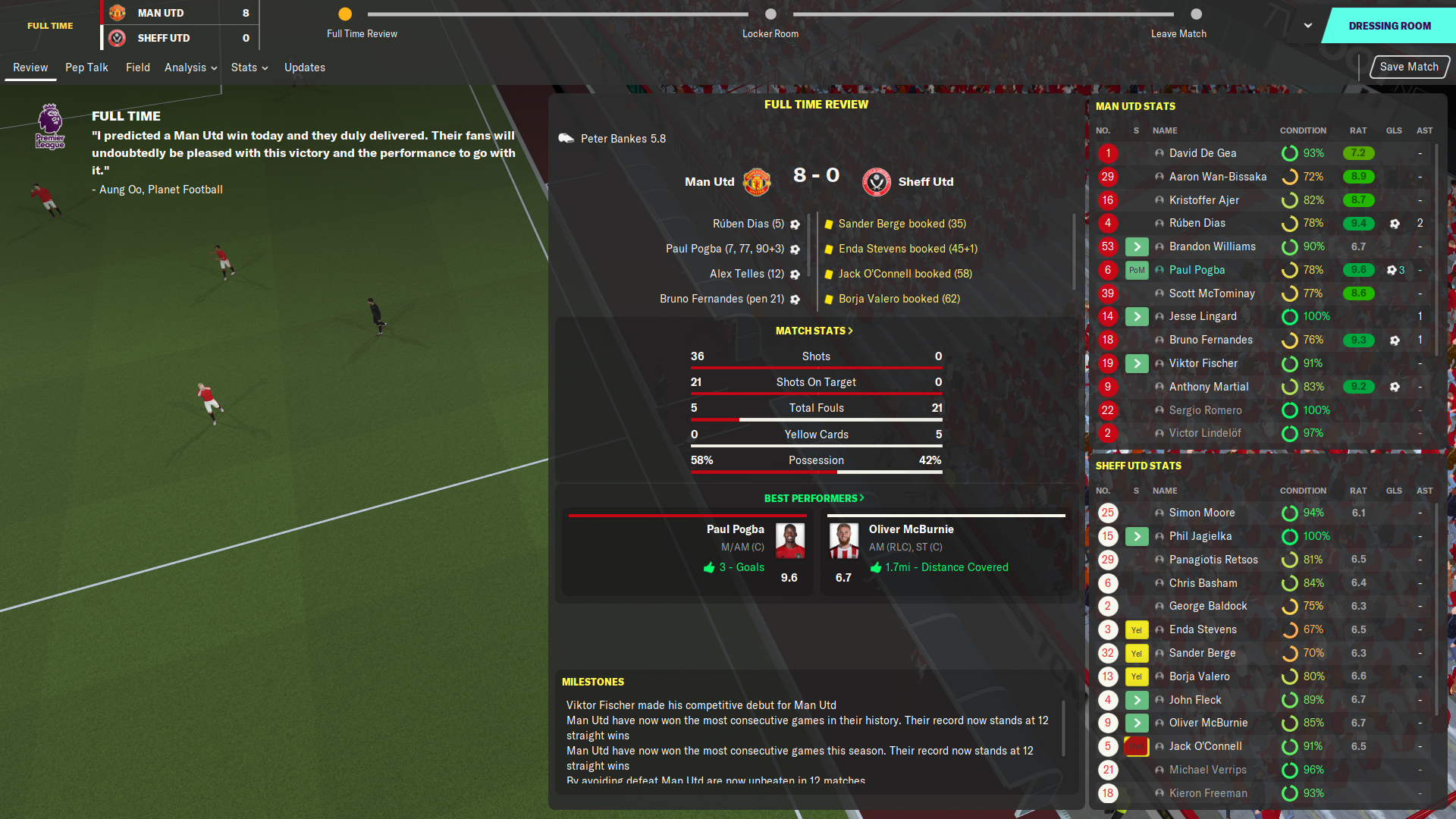 And, here you can see much about my chance creation, against chances conceded. Please note that this stat is slightly manipulated by the fact I have conceded most of the chances in Euro Cup away games, playing a fully rotated squad, with lots of breakthrough players. 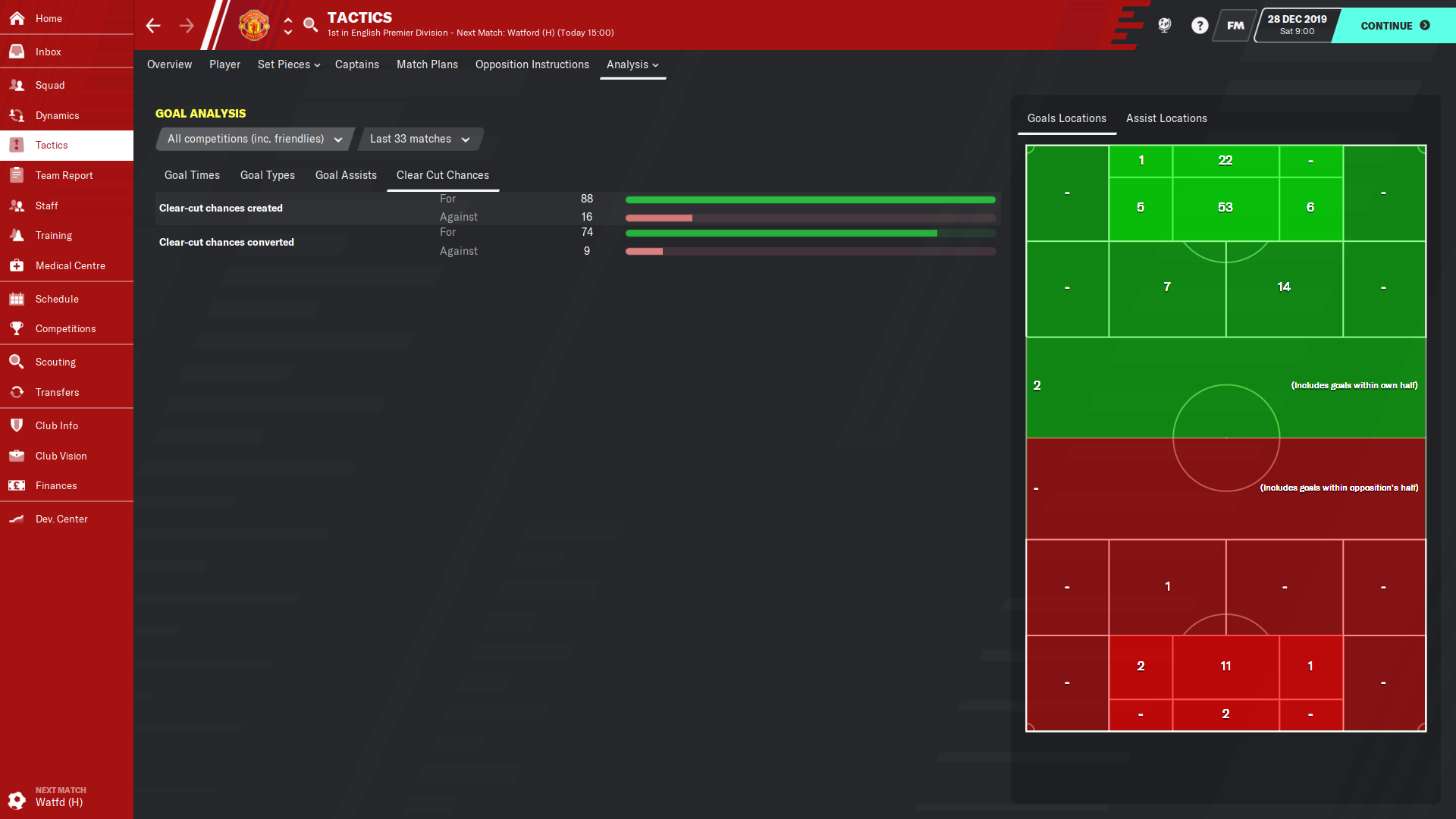 And, finally, here comes the fixture list of the games I played so far. 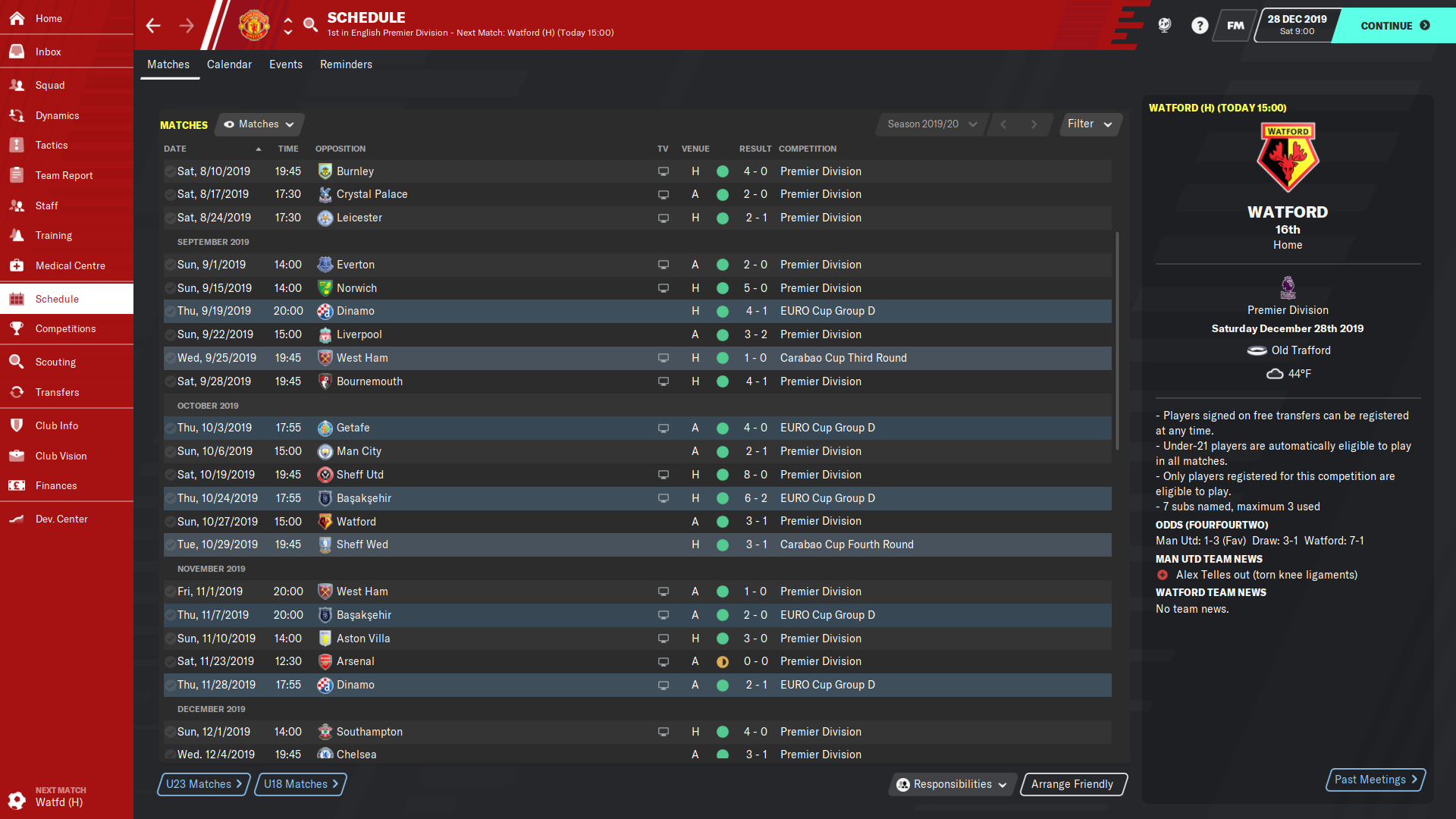 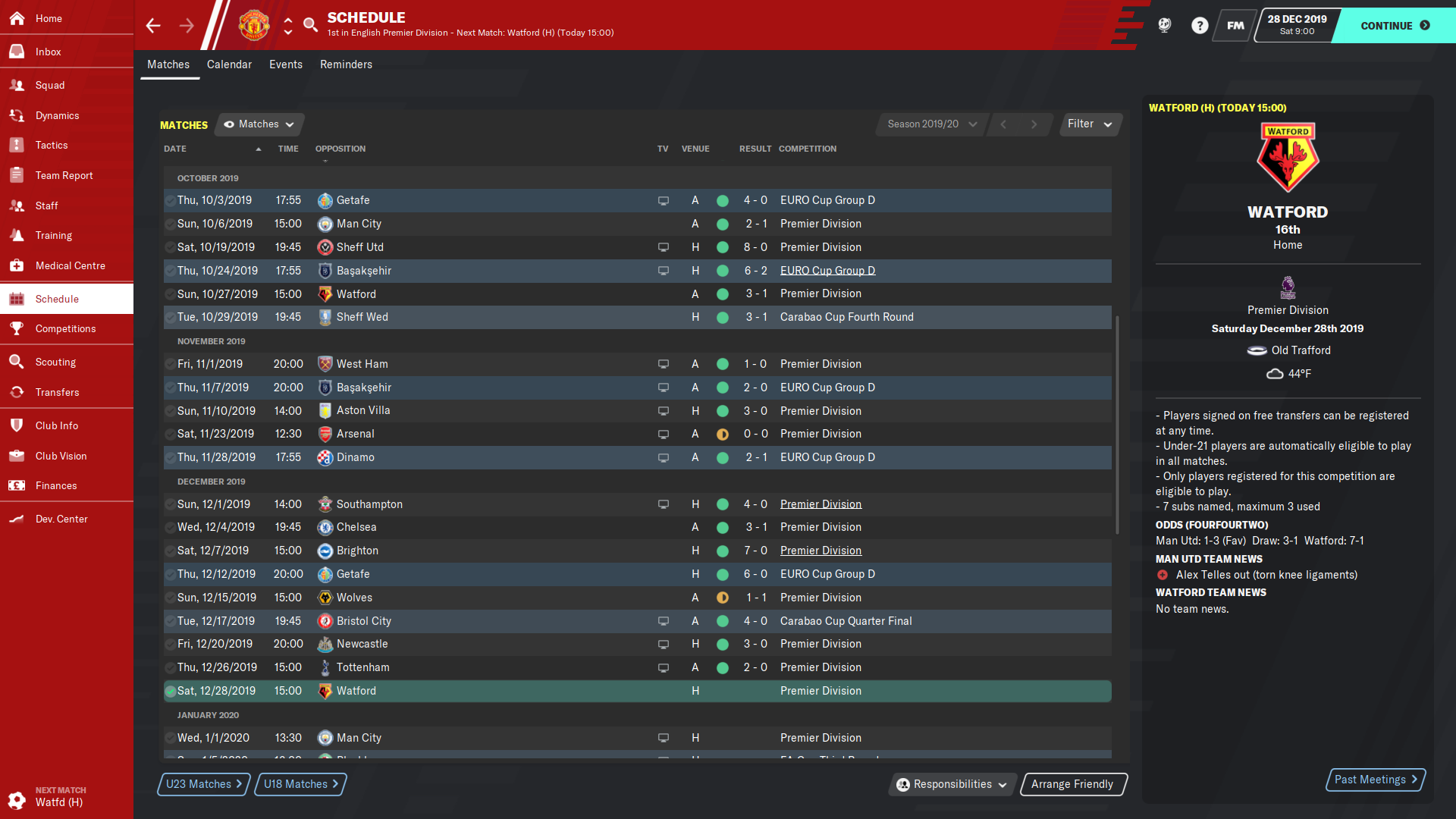 I hope I haven't missed on any important information I perhaps should have posted, I do apologize in advance for that, please do let me know if you need anything extra and I hope this tactic serves you as well as it did me, and as well as I hoped it would Ole.

Thank you for your time reading this through, or potentially utilizing this tactic! I can't wait to hear your opinions on it!