This is a set of tactics I have used to great success with Ajax Amsterdam. I won the League and the Champions League in the first season. If you have seen one of the tactics I made for previous versions of Football Manager, you probably know that my philosophy is to play the right way. I like quick, short passes, fast attacks, and free flowing moves. Another important part is to win back the ball quickly, and high up the pitch.
The base tactic: Custom 3-6-1 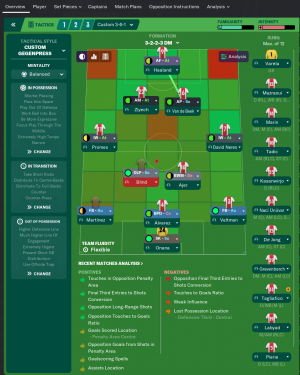 The idea behind the particular set up of the defence is the following. With four defenders, it has become a staple to have a DM drop back between the DCs to build a line of four defenders when in possession. This allows the wingbacks to play more offensively. What I wanted was to have two DCs join the attack - a nightmare for opponents, because the natural player to mark a DC is the opponents striker. And that would draw him way out of position. To achieve this, I use a back three. When the DM drops back between the DCs, this allows the two outer DCs to move to the sides, and join the attack as fullbacks. There is no role for this in Football Manager. So I used the workaround to place the outer DCs on the fullback positions. It is an idea I have never seen employed in real life football. But here in FM 20 it works very well for me.
6 players in midfield allow to dominate possession, and create a lot of passing triangles.

I used this as the basis tactic. In case it didn't work well, I switched to this one: 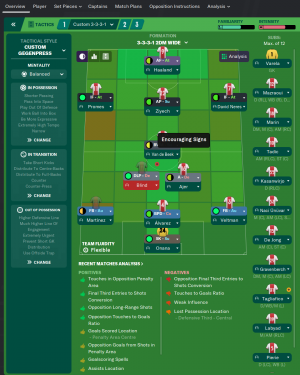 When in front and I don't want to chase another goal, I switched to this tactic: 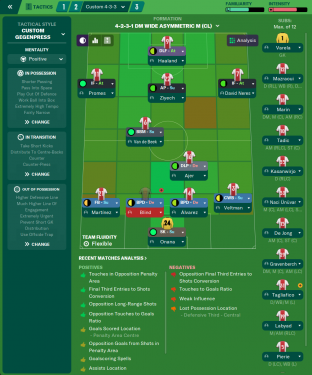 This set of tactics is quite demanding on the players. They need to be technically gifted to succeed with the short, quick passing game. And the high octane pressing is demanding on their physicality as well. I have not tested it with lower league teams, but I suspect that it might not be possible for them to create the passing game nor the relentless pressing. If somebody wants to try though I'd be interested to hear how it goes.

Feedback is appreciated. Let me know how it works for you. 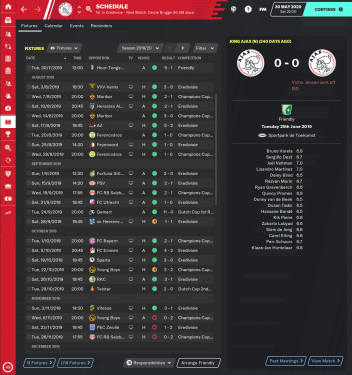 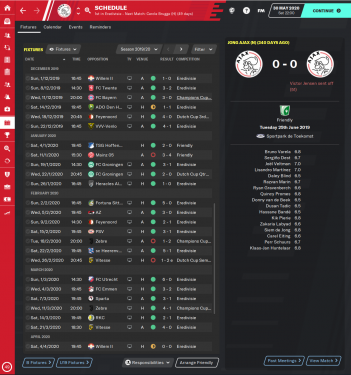