A Thorn in the Side - A York City Story

Zva93 said:
Are you using Kurt Willoughby at all?
Just finished my first season with York and he scored 49 goals across 50 games
Click to expand...

Nah he played 2nd fiddle to Beck for me
L

So as mentioned at the end of last season we let go the majority of the playing squad with just holding onto 6 players so we had to go out and build a new squad that would be capable of putting up a fight in this division so the majority of the players that I've brought in are young. This doesn't mean they lack experience though as a lot of them have dropped down the leagues from the premiership to try and build their reputations back up to get back to the top. 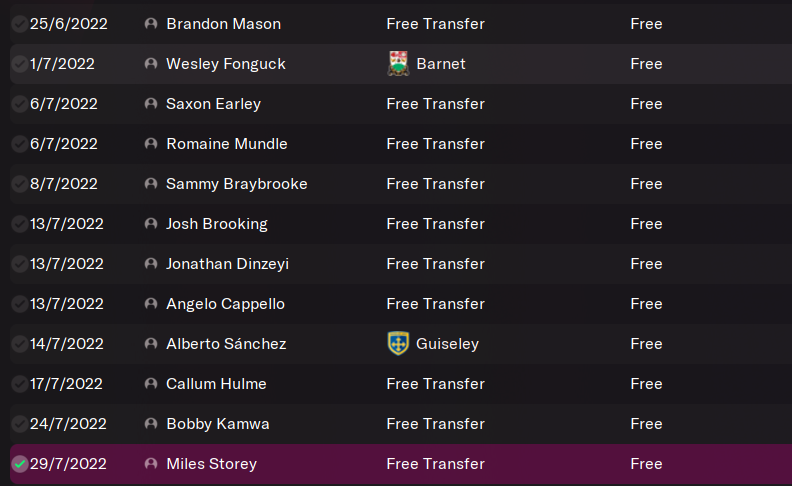 So far we have signed 12 players but we're still in the market for more as we build out the squad.

We had a pretty small preseason as we spent most of it trying to sign people so didn't want to play too many games until had had a squad capable of playing them but we put in some good performances when we did play and it makes me confident for going forward.

Well the board doesn't expect much from us at all in the league and I fully expect to be fighting it our at the other end of the table. I feel we can also easily meet the expectations in the cups. I will of course be looking to win the FA Trophy .

Not a too difficult start and I feel we should be able to perform well. During all of this we will have the added distraction of continuing to build out the first team squad though​
Reactions: zacram, TheNotSoSpecialOne, Hampus Silverholt and 1 other person
L

We bring in a final 5 players over the course of the month to take our total to 17 new signings as we have completely reshaped the squad and try and build for a brighter future.

Our first game and boy was it difficult as we sneak the win thanks to a final minute penalty. 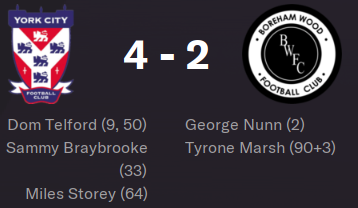 Our most convincing performance yet as Dom Telford comes into the team and gets a debut brace to introduce himself to the fans.

What an end to the game as Telford gets a two minute double as we locked to be heading for a loss. 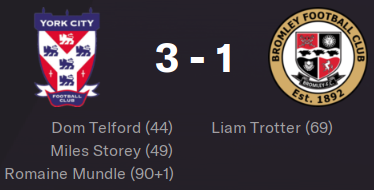 A much better performance to end the month as we are really starting to look like we belong here.

Some big games this month where we will get some proper tests to see where we really are.​
Reactions: zacram, TheNotSoSpecialOne and Hampus Silverholt
L

We do enough to scrape by here. I still worry about our striker but its difficult to get a decent one in these levels.

The same again here as we get the goal through a set piece with Mason popping up on the outside of the box to drill it home.

It was all looking good until the equaliser but we'll make do as its still a point on the board.

A big game against the now famous Wrexham and Storey tore them to pieces from the wing with an excellent brace as he is quickly becoming the first name on the team sheet. 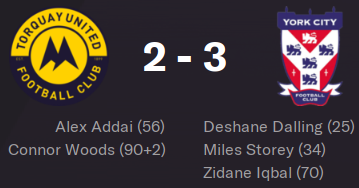 A 2 point lead and it just shows how close it going to be this season as only 2 teams will be going up.

A busy month with 7 games with us coming up against Yoevil in the final game of the month which could be vital come the end of the season. 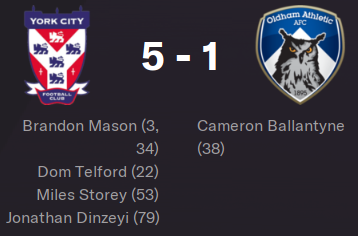 Our best performance of the season so far as we put in a great all round performance against Oldham. 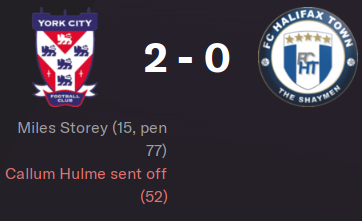 I thought we might get into some trouble after the sending off but Storey just keeps on scoring as he comes to our rescue with both goals.

I rotated some of the quad here to give some players a break since we were playing non-league opposition and it nearly back fired as we only managed a 1-0 win. The important thing is that we managed to make it into the FA Cup though.

A poor result here but we just couldn't get a footing in the game after their quick reply but we still get the draw.

I expected a bit of an easier game here but Fylde showed that they have strengthened as well even if they still are a good bit behind us.

The gap remains the same but we now also have Stockport County hot on our heels as well.

We've got the first round of the FA Cup against Woking who we have beaten already this season. We also have a game against Stockport to look forward to.

After a couple of months from passing my last badge the club has now agreed to pay for my next badge which can only help the club move forward.​
Reactions: Hampus Silverholt, zacram and Maxporto
L

A much tougher game than I expected and I was left worried but we left it late and progress to the 2nd round. 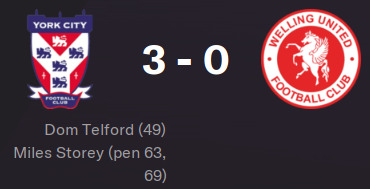 A much better game from us as we finally get a decent result as Storey gets his 4th goal in 3 games for us.

We made hard work of this game but we can always rely on Storey to get a winner even if tis coming from the penalty spot.

We were very lucky to get something from this game as we were terrible in front of goal and I couldn't of complained if we'd lost this.

Well we've dropped to 2nd on goal difference but thankfully still a long way to go this season so hopefully we can get top spot back.

Bring on the FA Cup 2nd round. We will be throwing everything at the 2 cup competitions and hoping our league form doesn't suffer.

The board has decided to splash the cash a bit and upgrade the youth facilities for us which can only pay dividends in the future of the club​
Reactions: zacram and Hampus Silverholt
L

Woking always make it difficult for us and they did it again as we leave it late again to get the 3 points.

A good win for us even if the final 15 minutes was nervy with us worrying that we could concede again. 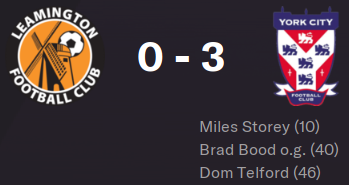 We rotated the squad a bit here as playing lower league opposition and it paid off as we ran out 3-0 winners and progress to the next round. The only downside to this game is that Telford got injured and will now miss the next 6 weeks 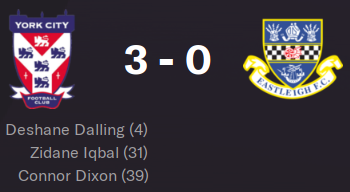 What a first half as we went in 3 up but sadly the 2nd half we weren't able to get anymore but it looks like we won't be missing Telford.

Bring on the FA Cup as we play against Port Vale and have every chance of being able to beat them. Its going to be a busy month though as we have 7 games. 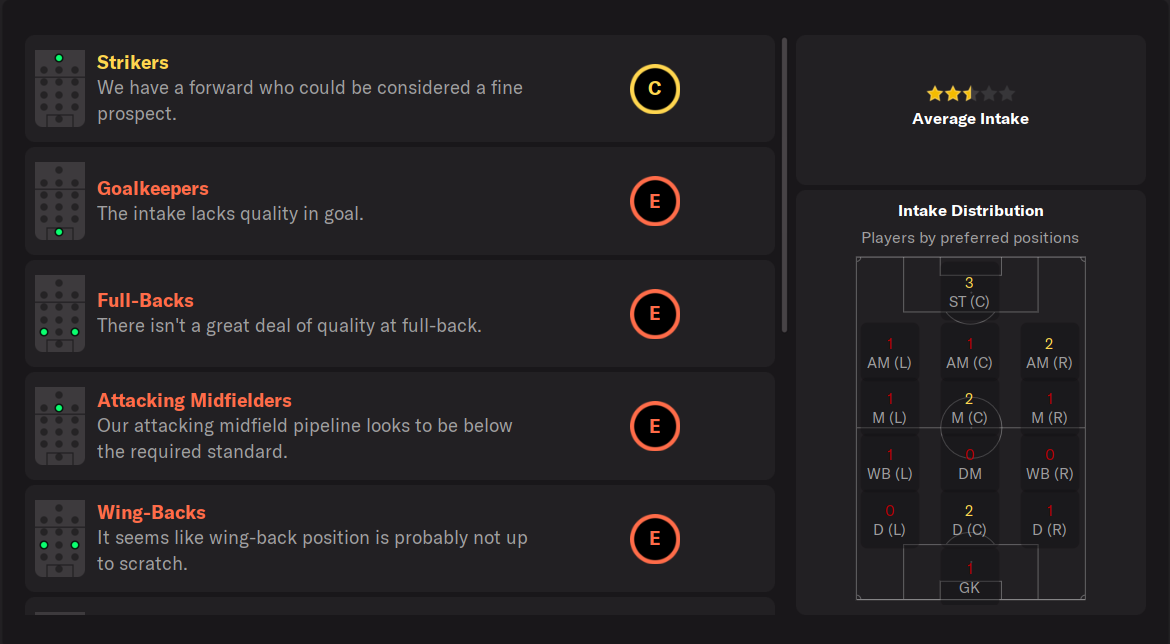