Show off your regens! (And non regens)

I remember for Fm15 there used to be this thread for showing Wonderkids and their development, thought it would be pretty good for it be for fm 17 as well, note I wasn't the creator of this idea but it does sound good.

Let's get this one started. 3rd season with Middlesbrough:

As per all English regens, Ward was pretty expensive, at around 7m plus add-ons, coming from Brighton in January 2019. He's bagged a few from the bench, and got a hat-trick on his first league start. Intrigued as to how he will develop from here, but pretty impressive stats for a 17 year old. 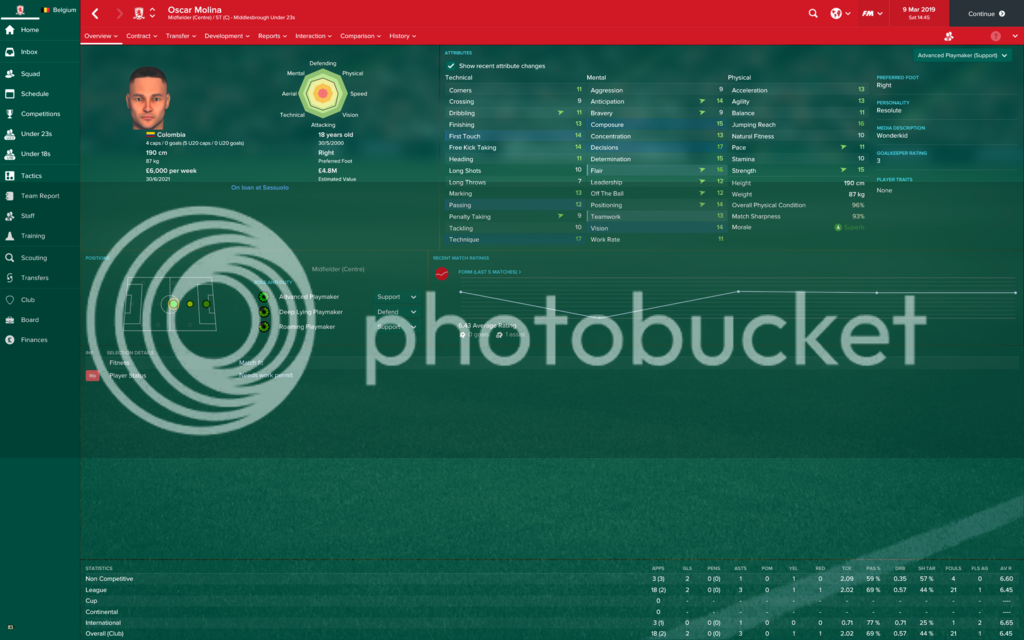 I picked up Oscar Molina from Junior in Colombia early on in the save, and he joined in the summer of 2018/2019 without a work-permit. Frustratingly unable to put him in the team this season, but he's doing well out on loan in Italy.

I saw OM about to buy Nikola Marjanovic for a reasonably hefty fee, having not noticed my scout having picked him up before. For around 7m, he could be a steal if his stats carry on in the direction they are going. Loaned abroad for work-permit reasons

Dominik Fröschl is an extremely exciting regen picked up from Austria in the last window. One of the more expensive regens at around 8m, but he has slotted really well into my team and has come up with a few man of the match performances in the few months he has been here. Will be really disappointed if he doesn't end up being a star.
I

[FONT=&quot]My regen defenders aren't much to look at, anyone else finding that? Anyhow, here are some of my other ones:

ifanythinhehitthattoowell said:
My regen defenders aren't much to look at, anyone else finding that? Anyhow, here are some of my other ones:

**** that goalkeeper one of the best iv'e ever seen.
I

dilakh2 said:
**** that goalkeeper one of the best iv'e ever seen.
Click to expand...

Yeah he's pretty tasty and only 23. Lafont has only just turned 26 and has been brilliant, but he'll have to go I think
B

in my 4th season with Venezia FC. My second season in the Serie A , after back to back promotion, and in 3rd place after 23 games.
These are the regens that are in my team selection
View attachment 115657
Jorge Bonansea:
His first season for the club, got him on a free from Colon de Santa Fe.
He is my back up RB, but he might become my starting RB very soon.
View attachment 115656
Ladislao De Sanctis:
Picked him up at the start of the season from Pisa for only €250k. Looking very solid for an 18 year old and will get some playing time at the end of the year. Will also be a home-grown player since I picked him up while he was 17.
View attachment 115655
Oussama Kabla:
Just got to the club in january, bought him for €200k from Jeunesse Sportive de Kabylie. Loaned him out, since I already picked up 2 non-eu players this season. Will be my back-up left back next year.
View attachment 115654
Branko Mrsic:
Signed him at the start of the year from NK Osijek (250k). After the departure of Diego Poyet to Liverpool, he will definitely get some starts. Will also count as a home-grown player in the future.
View attachment 115646
Sasa Kralj:
His second season for the club, got here from Koper for only 90k. Hasn't been playing that much this season, but will be back-up after Poyet left the club. Will be Home-grown next year.
View attachment 115649
Jan Kadlec:
First season here, signed him for 300k from Slavia Prague. Back-up for the midfield position. Will also be home-grown in the future.
View attachment 115644
Lan Kocic:
One of my 3 starting midfielders, has been very good in his second season for the club. As Kralj I also signed him from Koper for €425k
View attachment 115643
Niko Tevdoradze:
A fcking beast of a striker, already has scored 17 goals and assisted 9 in 30 games. Signed him from NK Lokomotiva in Croatia for €2,8 million
View attachment 115642
Zdenek Jerabek:
Also joined the club at the start of the year from Slovacko for only €250k. Liverpool, Inter and Arsenal have already bid for him but he will not be leaving the club any time soon. Will be home-grown if he stays at the club 2 more years.
I

I wish I had a Georgian striker, especially one that good. Jerabek looks like he could be even better though
C

Just sold my last couple of real players so all-regen team now, here they all are. Got a lot of them young so 11 of them count as home-grown at club, only regret is there aren't more Italians in there. Average age 21.8, first choice 11 is De Lange; Lytvynenko, Marks; Maisano, Mesenholer, Arada; Velez, Cardelli; Acheampong; Malgeri, Baratella.

Spent £62m on Mesenholer this summer, which I'm pretty sure is the most I've ever spent on a player in any version, but he just looked too awesome. Ridiculously amazing, no weaknesses, still only 20, I needed a DM, and I made so many high value sales this transfer window that I still made a £72m profit even after this outlay
A


I wanted to have an english striker pairing after noticing one of my youth intake was touted as being a potential monster. I bought the next best english prospect from Blackburn.

Taught him to shoot with power as his partner has places shots. Hopefully will have the two best english strikers in a couple of years. Don't have a picture of my youth intake striker at the moment
C

My Russian Wonderkid
Thrown off Alan Dzagoev at the Russian national team at the age of 19.
View attachment 113476
Last edited: Dec 24, 2016
T

And another two former strikers of mine, both world-class and I didn't really wanna sell them but I couldn't turn down the money on offer

Never had a player quite like this one. I bought him for £4.5m, he's 16 and he's already third in the centre back pecking order (behind de Vrij and Sule), and I'm giving him games from the bench towards the end of the match. Excited to see how he turns out.