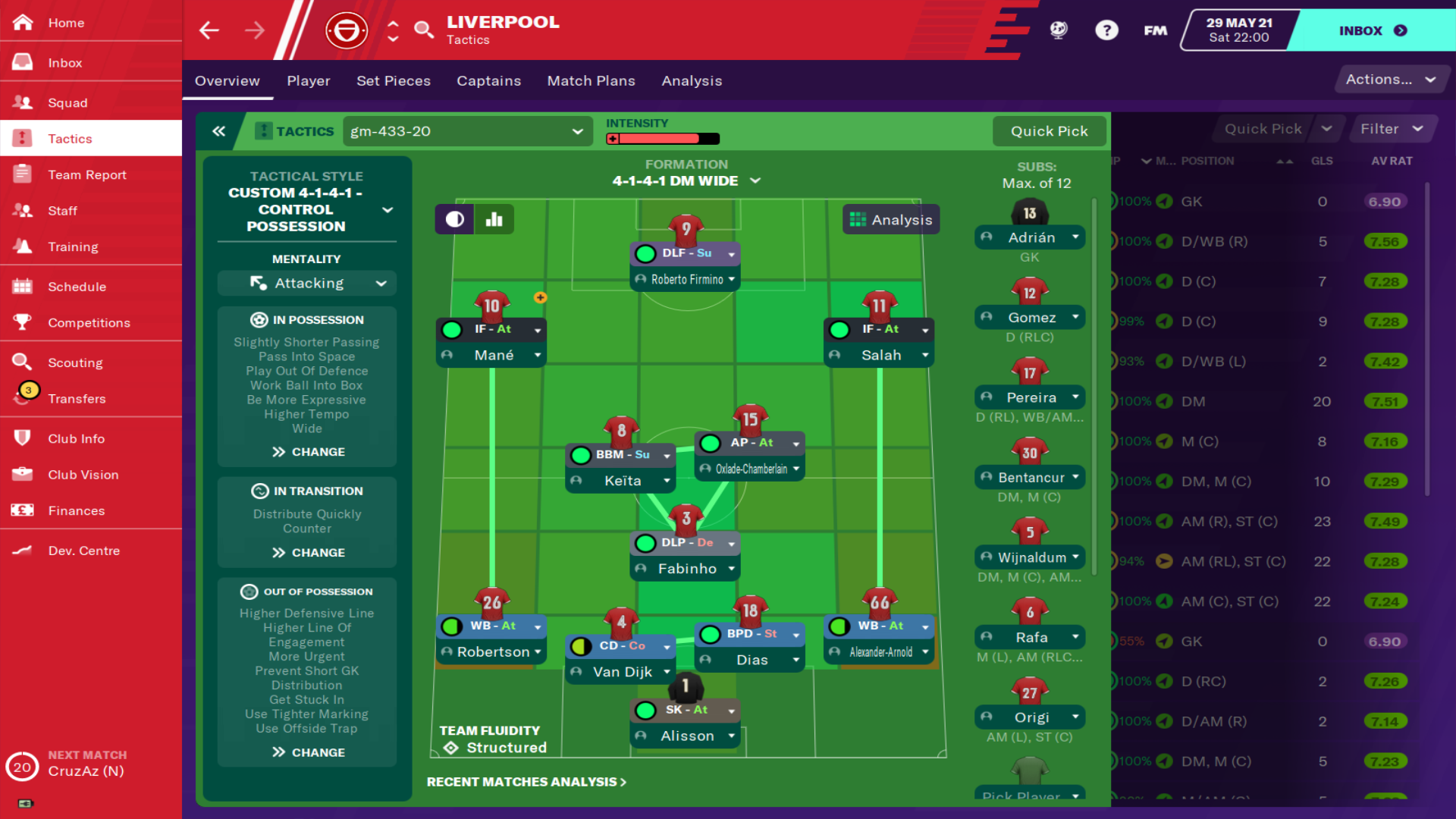 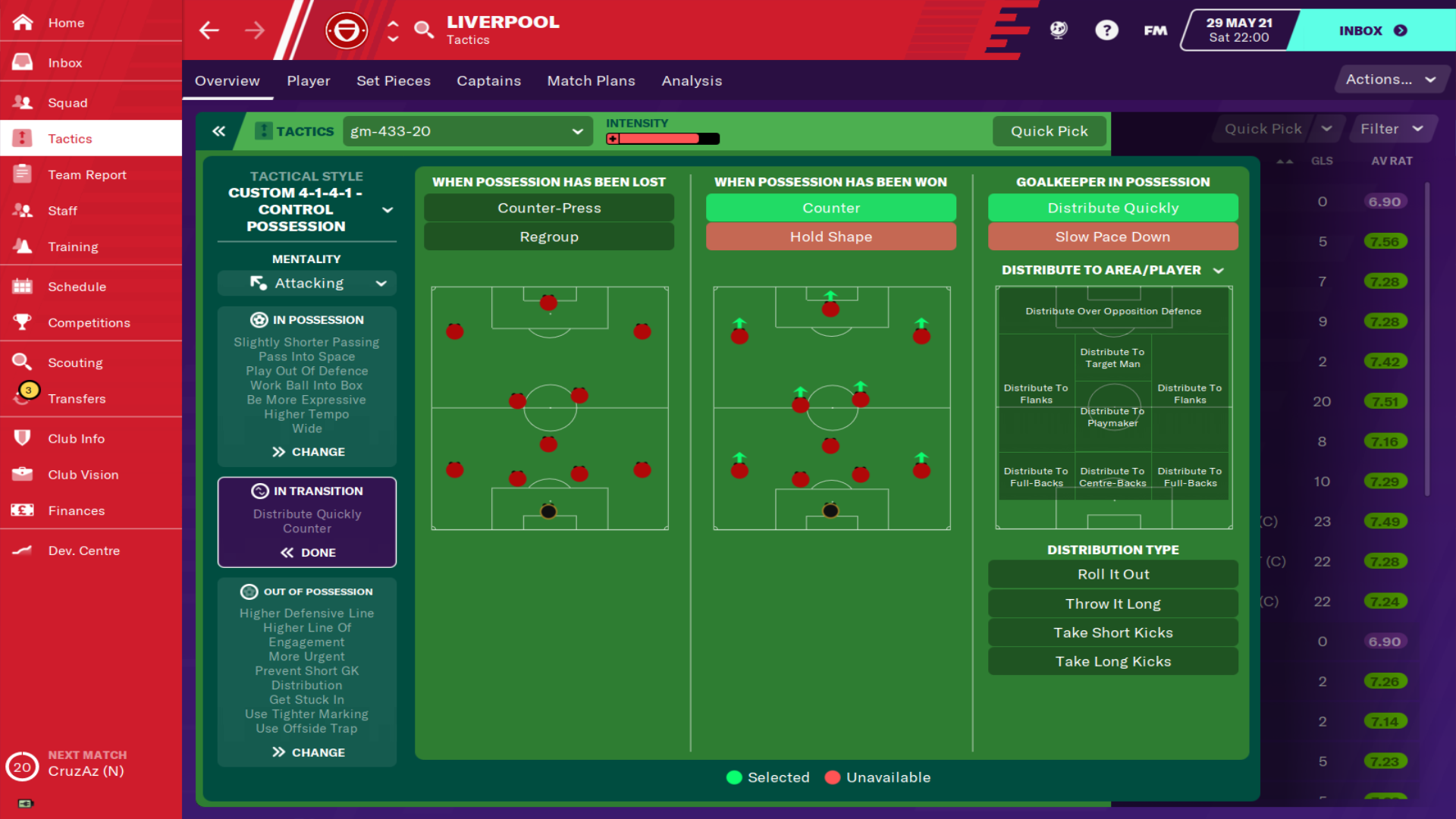 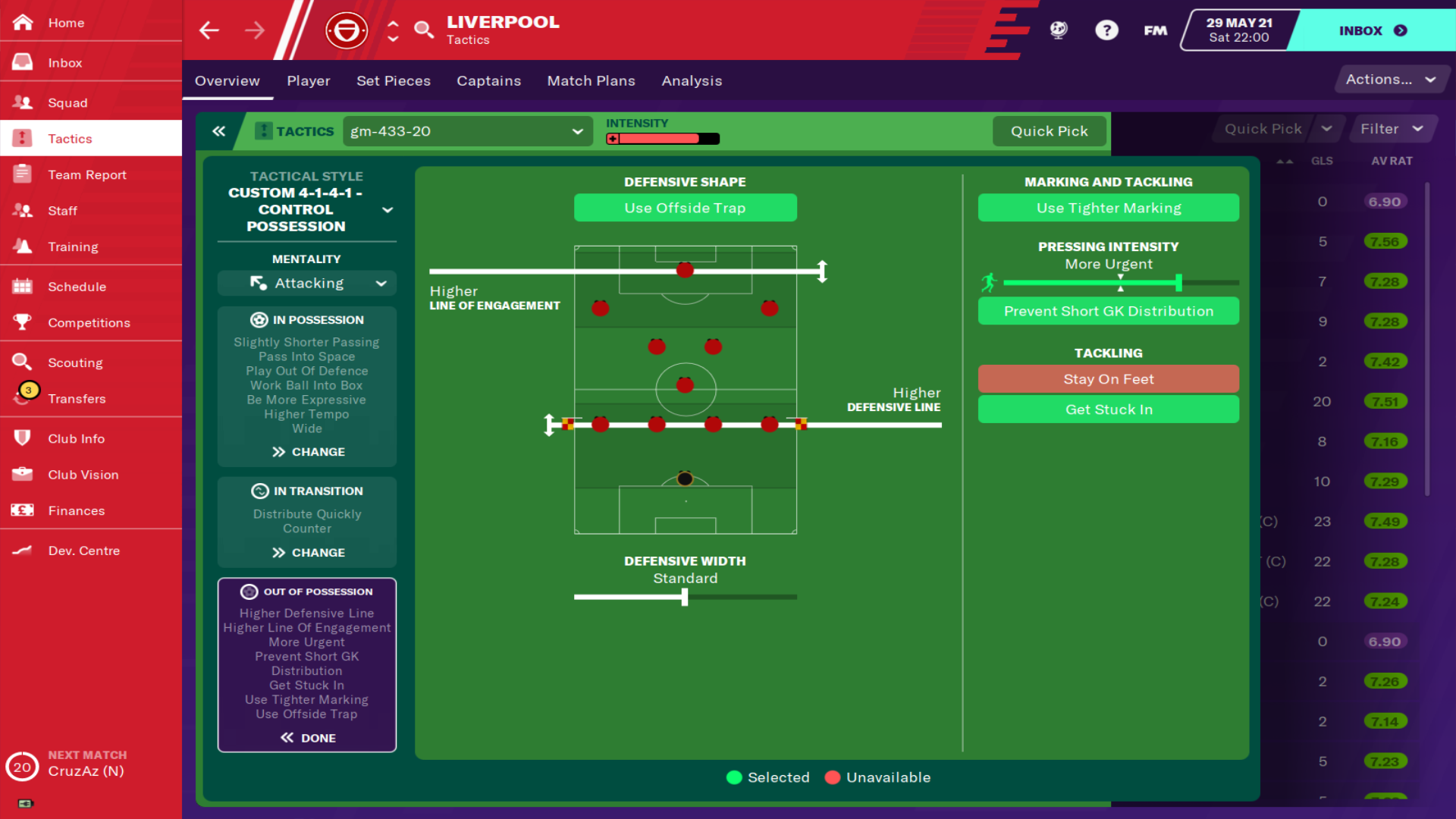 Given this is such a popular shape I thought I’d create a 433 tactic with Inside Forwards. It aims to take elements from Klopp, Mourinho and Pep.

As Liverpool have a squad capable of playing my way of wanting to play they were my test team. (2nd season following tweak to 1st).

“Klopp wanted meat – he got fish”. Yes, indeed Jose. Klopp’s teams do struggle against teams that park the bus. And this is an area I’ve aimed to fix in my system.

I don’t like gegenpressing so that element I have refrained from this. However I like the front trio of Mane, Salah and Firmino along with Trent and Robertson on the flanks. Those roles I’ve taken from Klopp along with a higher tempo game.

From Pep, his use of an advanced playmaker in Iniesta that could dictate things in the final third of the pitch behind the striker I’ve also brought in. This was a key element for me and where having a creator in the top third can unlock defences.

Then comes the use of a Michael Carrick at DLP-D sitting in front of the defence. However I have him playing risky passes to provide a threat from deep on the counter – which is used with great regularity, taken from Mourinho.

And having a combative energetic box-to-box midfielder in Essien makes up my midfield trio.

So rather than gegen-pressing, a high-line will suffice. It will give us enough time on the football to stamp our authority and play our game. But we can retreat quicker into a solid defensive shape when we need to, leaving us less exposed and which gives us more opportunity to hit teams on the break.

The tactic is still very highly intensive. I do generally want our players to win it higher up if they can, but our DLP-D will be the player to hold the opponents up if we do fail.

The design ultimately looks to be a successful one with footballers capable of controlling the game when they need to, but also be a real threat regularly on the counter, and includes the goalkeeper having full range of distribution and done quickly.

This combined durability will make the side competitive against opposition that bring different challenges to the table each and every week – and with it should bring about good consistency.

-Show all opposing flank players foot to the touchline.

This exceeded my expectations, and is the highest points total in the Premiership I’ve had in this year’s FM, and probably my finest work in the sense of translating the vision into a result.

Many many good results and convincing ones, including a 4-1 home and 3-0 away win vs Pep’s City and 5-1 home, 3-0 away vs Chelski….and we won the title with 9 games to spare whilst breaking City’s 100 points record grabbing 101 points.

We also lifted all the cups winning the Carabao, FA, and ECL beating A Madrid 4-1 in the final, and it wasn’t a flattering scoreline either. Our one league defeat came away at Arsenal.

Most goals scored with 95 and least conceded with 19, and the system will provide good entertainment, have high quality passing on show, with good pressing and happiness at the number of goals scored. So it will hit some good tactical briefs too. 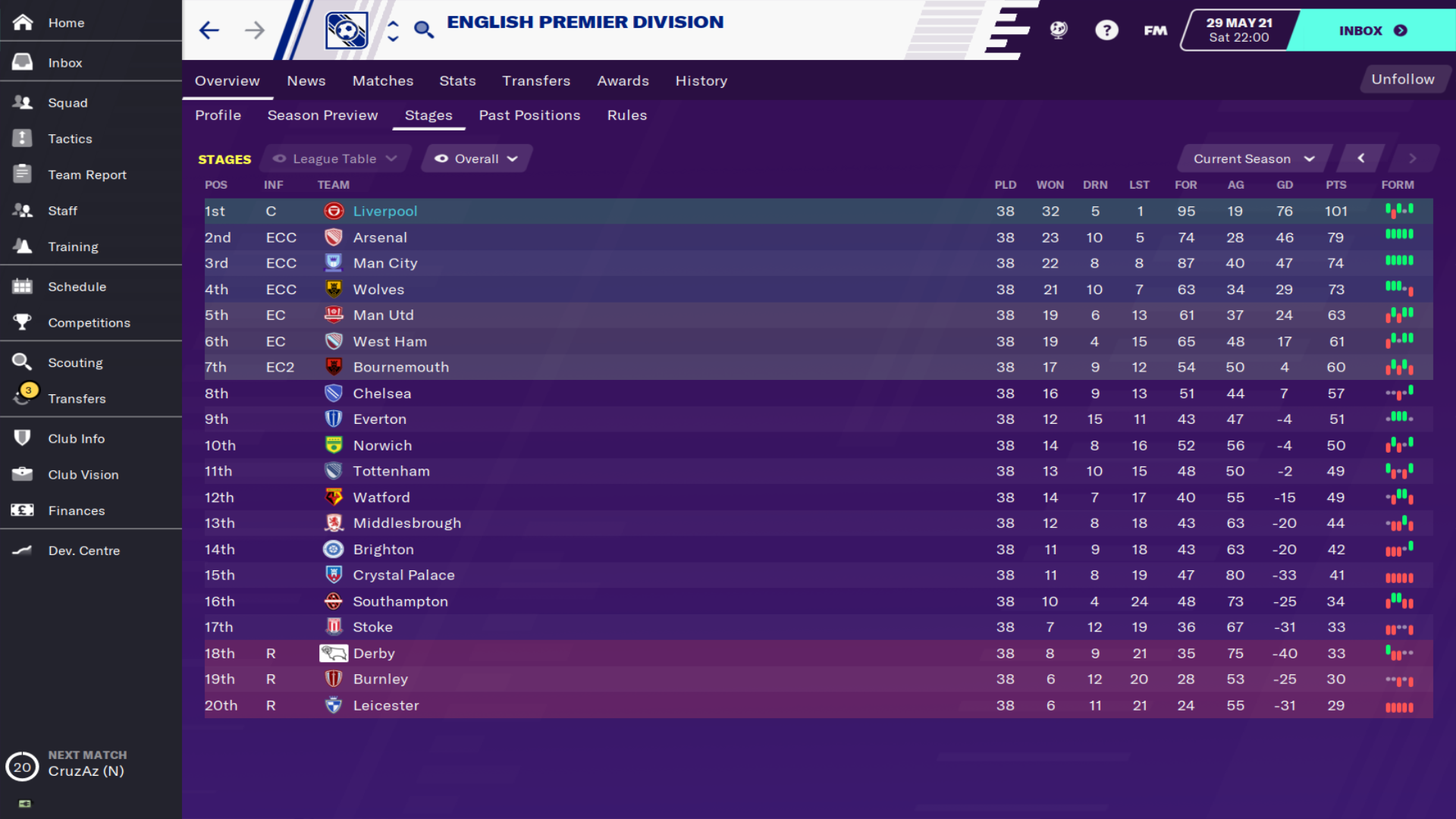 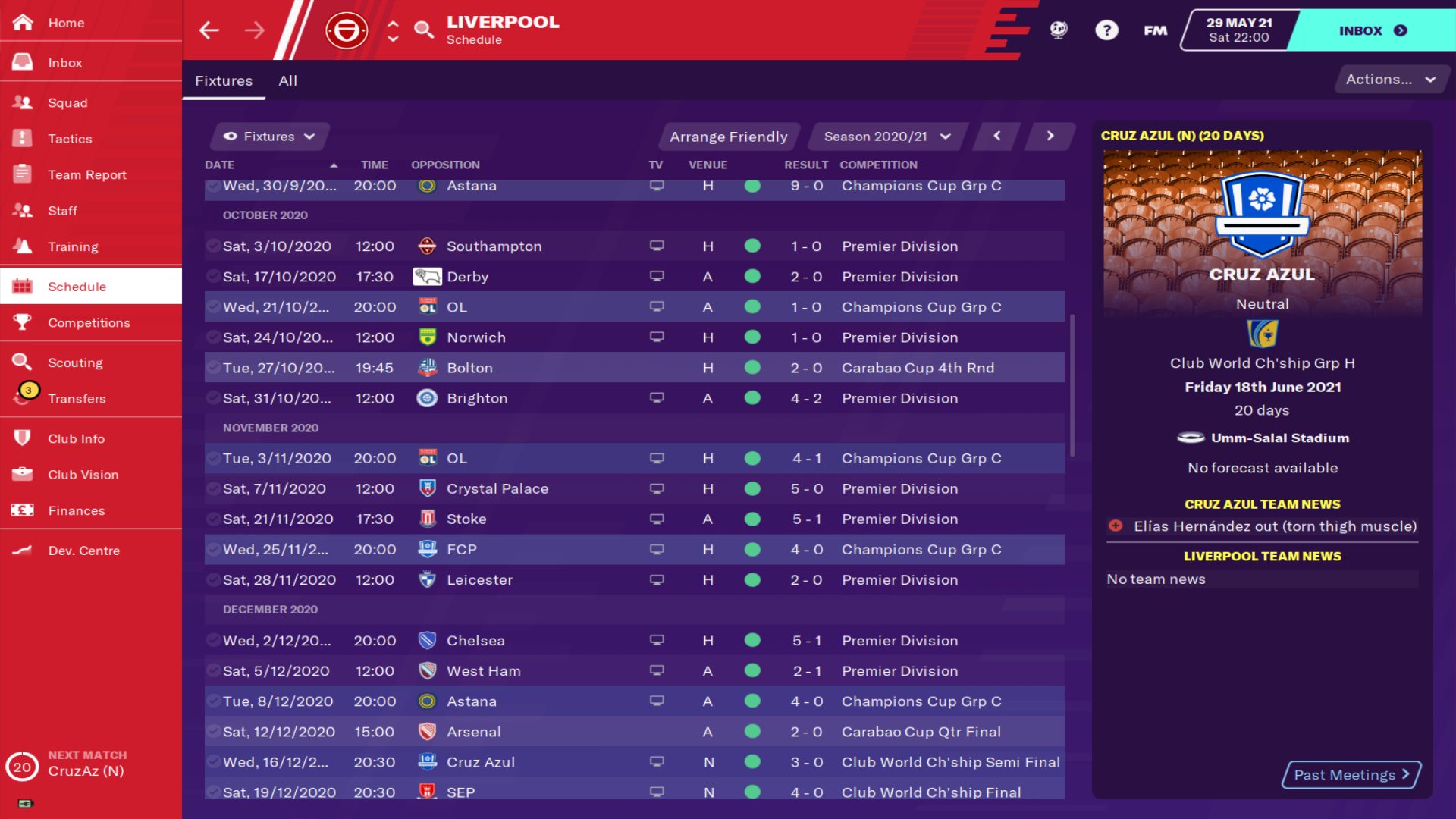 The system is how I would envision a 433 of mine functioning with many solutions in it’s style to win a football game.

How it fares at lower sides I don’t know. Championship level footballers it should work, but anything lower a tweak to using playmakers and approach play would probably be needed.

But with capable players, with a good squad you should hopefully be challenging for honours.

i tried use an AF and changed AP to support, do you think this will affect the way this formation plays. this is my first year of fm
Best tactic until now,so yeah 5 stars
Read more…