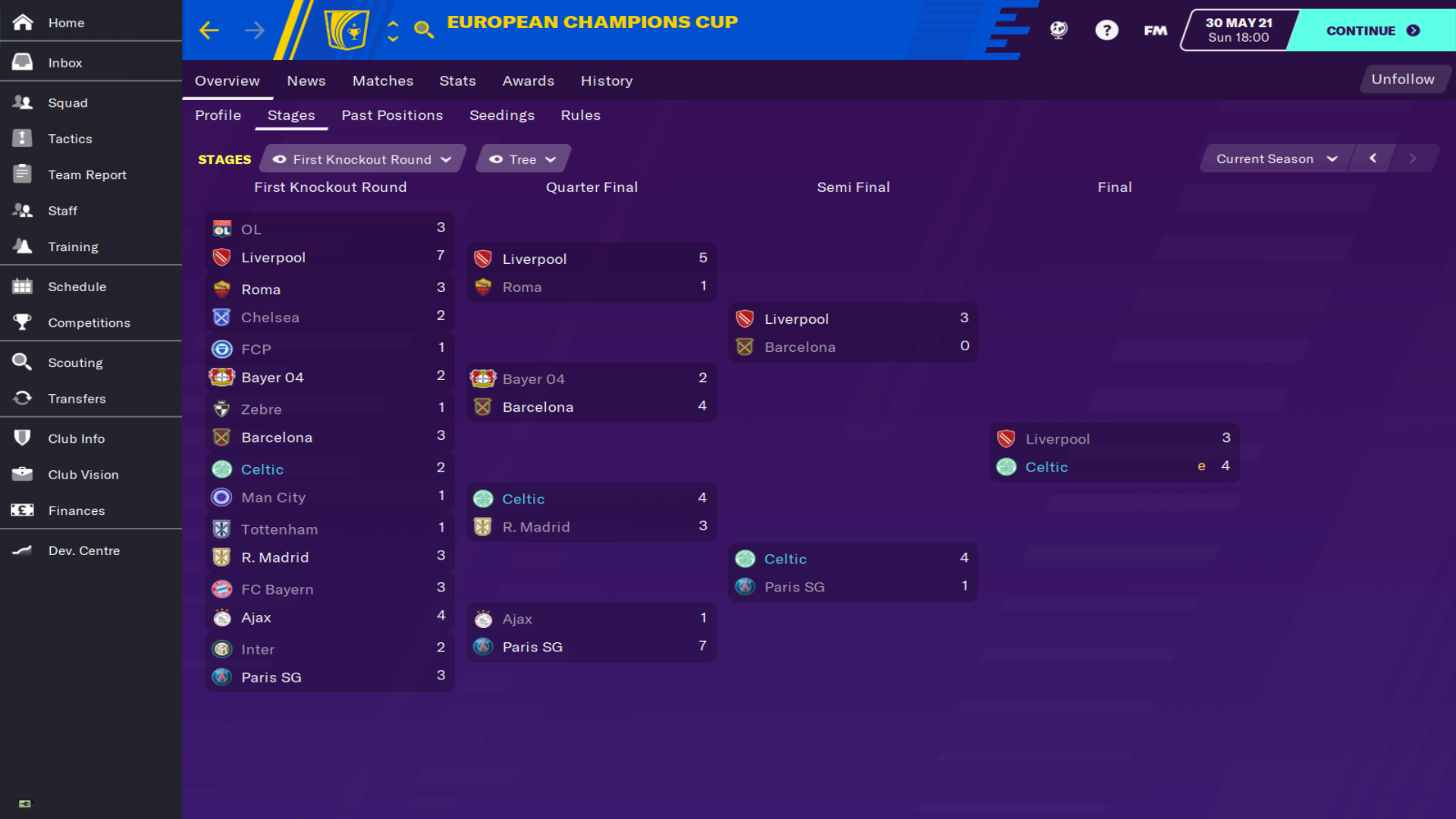 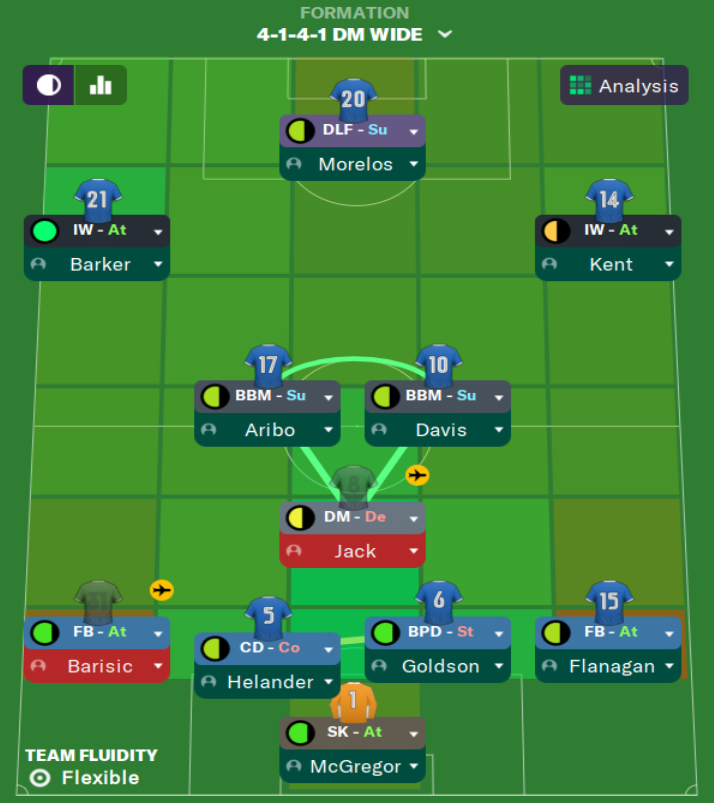 I have released some of my systems on previous patches. With all the chopping and changing with the ME, I now think I have my FM2020 systems together for release here in one central place, and my final own unique one.

The systems are based on the work of real life managers. Of course these are my interpretation and will be snap shots in time. The one exception available here is of my own and in my opinion happens to be the most successful of them all. It won me an ECL with Celtic in the second season.

I can't go into too much depth on each system here again, but will give a brief description and note important aspects you need to consider with selection. I have covered the most popular formations including 442,433,4231,4141,352,343,235,2323,4312 diamond. If you have any questions on any systems specifically, then do post.

I would also say you really need to know how the system plays and ensure your players have the right squad and player PPMs to get the most out of these along with OIs. So I would suggest to look at the tactic, each individual players PIs so you gain a good understanding of how the systems play.

So hopefully there is something available that may prove useful to try. What I can promise though is you'll always get to see good football and its plan in action when watching your side on the pitch. Style is highly important to me, and hope you enjoy watching the systems play out.

City Taka 2323 - Based on Man City with a fit Sane on the left and Sterling on the right. Their most successful combination where they achieved great domestic success. It has achieved an average of 69% possession over 38 games in French Ligue 1.

Pep's Barca 2323 - Based on Peps famous Barca. Very difficult to find players for this system, but if you do you'll get to see your team force your opponents to be camped in their own third. Over 38 games in Ligue 1 this averaged 68% possession.

Pep's Die Bayern 235 Inverted Pyramid - This is from Pep's Bayern days when struggling to break highly defensive sides down he would revert to this system. Like his other systems, you'll need superb quality players to break sides down. In Ligue 1 38 games, this averaged 70% possession.

Klopp 433 Lpool - Not as gung-ho as his Dortmund side. Based on Liverpool utilising two BBMs it will counter-press high up the pitch with the aim of counter-attacking quickly once the ball has been won.

Klopp 4231 Dortmund - Here I've used a very attacking mentality. It's gung-ho so you will need to really craft your squad well here. An exciting watching with the game played at a blistering tempo.

Jose 4141 Chelsea - Based on his Chelsea in his first spell. With Robben and Duff on the wings, and a real solid midfield trio of Lampard Essien and Makelele it's a solid system designed to hit teams on the break. It uses a DLF-S as there aren't many decent target men in FM.

Jose 4141 Chelsea Drogba - This is based on the above, but does try to utilise a target man. Due to the lack of target men, this is probably suited for the lower leagues or clubs hoping to stay in a division.

Jose 4312 FCP Diamond - This was created from his amazing FC Porto side that dominated domestically and in Europe for a couple of seasons. An offensive system too as they weren't a negative side domestically with Deco at the heart of the side.

Jose 4231 Inter - I aimed to produce a system that focused on luring the opponents out of their defensive shape before hitting them on the break. You'll need quality players all over the pitch for it to work, and defenders who loved to defend.

Jose 4231 Real - Probably in FM result terms the stronger of the two 4231s. Based on Jose's record breaking Real Madrid that also conquered a Barcelona side at their absolute peak. An exciting watch, and this in my Real save broke both the La Liga points record and the number of goals scored in a season.

Conte 343 - Based on what he stumbled onto at Chelsea, producing an amazing turn around in fortunes to win the EPL. Using Luiz as the Libero, and two BBMs with their own unique PIs of Kante and Matic, it is a system that has brought me a quadruple and promotion from the lowest tier of Italian football.

Conte 352 - A more aggressive version of Conte when looking to take the game to the opponents and counter-press in their own half. It uses two Mezzala's and uses a DLF-S rather than a Lukaka target man type striker.

SAF 442 - Based on United of 99. Will need a quick back-line and quality midfield duo to work, but a great watch if you enjoyed this amazing treble winning side. Probably not the best system used at the lower levels though unless you have a quick defence. But a lower of the defensive line and urgency could tweak this well at the lower levels

BJT 433 W.O.M - This is my "Well Oiled Machine". It has the solidity of a Mourinho side that aims to suffocate the opposition during the game, whilst having that quick wide play Fergie utilised at United.

A perfect balance of a real solid outfit, whilst potent going forward and with pace. It was designed based on Mourinho wish of a Gerrard and Lampard midfield combination at Chelsea.

This was the system that won me an ECL with Celtic in only my second season, beating Man City, Real Madrid, PSG, and Liverpool in the final. (playing with 10 men since minute 60).

-Note I have a guide on the SI Forums to use this tactic properly and also some other general tips. This includes what to do when down to 10 men, squad / PPM building, and other various hints / tips.

You may have stumbled to some of these systems - note that everything uploaded here are my final versions as per the file names now provided as of 13.4.2020. I did some minor tweaking yesterday on each - focused on being slightly more offensive on the transitions from defending corners.

Well hopefully you'll find something interesting here. There are a lot of good tactics out there. I guess my set will be geared to those wanting to watch realistic football on the pitch, with systems inspired from real life managers.

Each system has brought me success with winning trophies. They have been designed in this way, and so not all will be geared for the lower levels.

But I guess that's where if FM Base are able to test these systems, I'd be hugely appreciative as this will hopefully give a rough guide - so if this is possible that would be great.