I’ve always admired the game being played in a more pragmatic manner in contrast to the more attacking or possession style of football.

After trying to create something similar to a Conte 532, I wanted to try and go one step further. A greater emphasis on the defense, minimising clear cut chances whilst also doing something I have yet to do in any system I have created – using the Enganche role.

I’ve also not created a 541/361 before, so both these elements made trying to make this formation work interesting.

The general aims I had when making this system was:

-To play in a pragmatic way, be difficult to beat, and still be highly offensive on the break

-Nullify the opposing creative outlets in the DM / AM stratas

-Still maintain a degree of ability to open teams up by working the ball into the box, needed against sides that will park the bus

By playing a narrow diamond shape in midfield with our two hooks placing immediate pressure on the opponent’s creative outlets, this will naturally force them out wide and make them highly predictable, to then be met with a flat back 5 to try and get passed.

This is never going to be a system to blitz all opponents during the course of the year, but it should make you hard to break down and highly competitive, so hopefully not too many points would be dropped against rivals in the quest for the title with the ability to grind out results against superior opposition.

The difficulty is getting the balance of offense and defense here, as defensive tactics generally can't be used as a single blueprint to win league titles. So I have tried to balance the approach as much as possible, having enough going forward whilst being very solid at the back.

Whether this design therefore works in other leagues I don’t know as yet, as Italy is the league I’ve wanted to test it in for the above reason. It is considered the more tactical league, so I was confident I could get the formation working here. 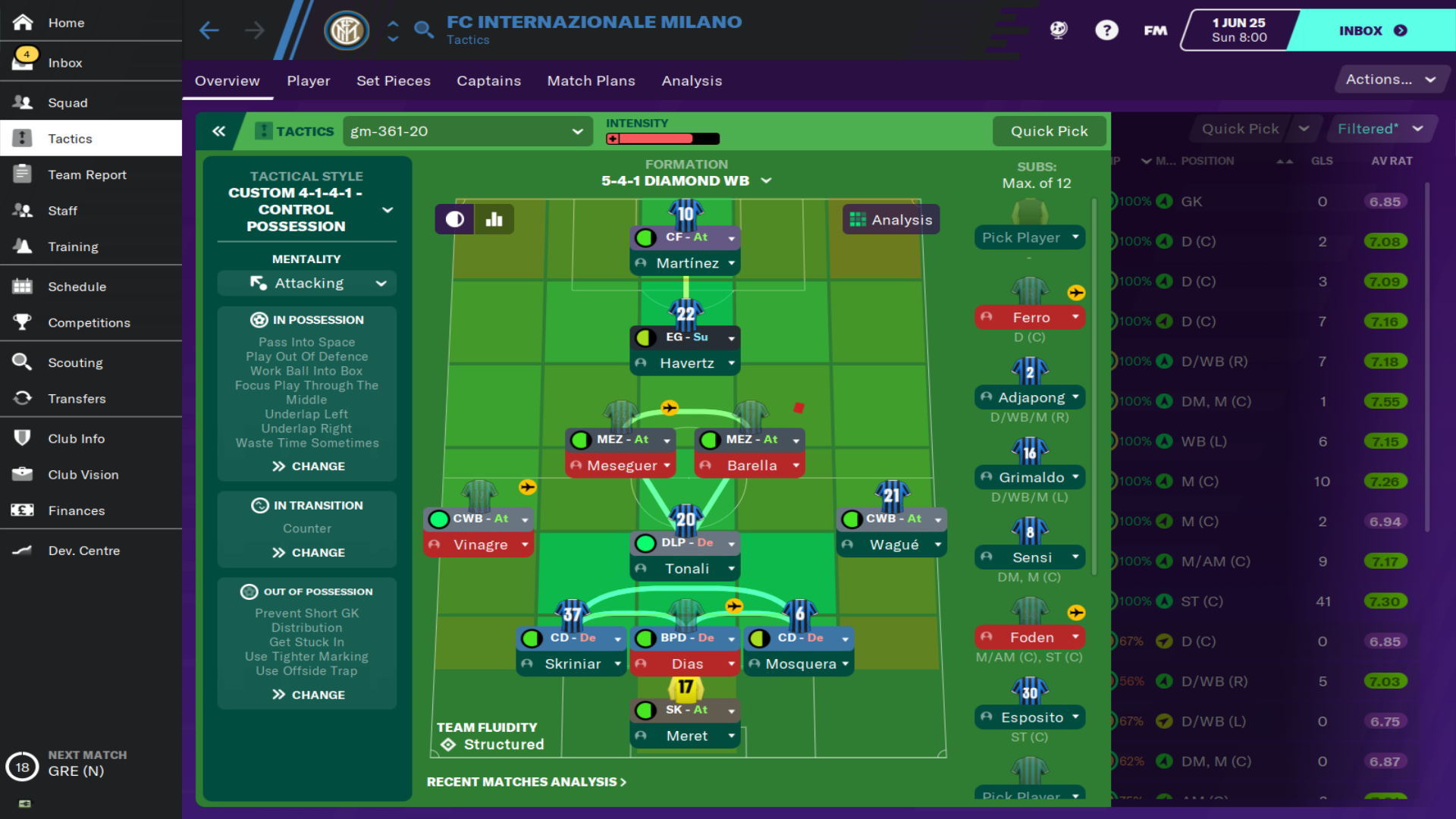 Above is the shape I’ve gone for here. My thinking of the roles are the following:

The Defensive Enganche – Given this is a stationary role I’ve tried to go with a more direct approach. Having high possession will mean if the opponents employ a DMC he’ll likely be marked out the game.

By playing more direct, when the opponents have the ball it will give the Enganche a greater opportunity to find space and get the ball to him quicker.

And my mindset with this role is rather being the real creative player in the side, his aim is to stop the opponent DMC from dictating the game.

However if the opponents don’t play a DMC, the Enganche will have complete freedom to be our primary creative outlet.

DLP D – With our Enganche more defensive minded, that’s the reason I’ve decided to play two hooks in the system by employing a deep lying playmaker.

When we do have the ball and our Enganche is struggling to make an impact in the AMC strata, we still have a playmaker to dictate the play from deep and maintain the ability to build up attacks when going direct isn’t an immediate option.

Mezzala’s A – With the Enganche stationary and not offering much in the way of a direct offensive threat, we need runners that will regularly support our lone man up top.

Two Mezzala’s will help create the overloads out wide with our Complete Wingbacks on Attack duty.

This in addition to making those bombarding runs into the box giving our Enganche plenty of options, and so it is a role that fits the bill.

Keeping a solid shape at the back is the way I wanted to go, and similar to how Inter under Conte defend without the ball.

By having a standard defensive line and loe, our defense should be able to retreat into a solid block without overly getting caught out from the long ball over the top. And if this does occur, a sweeper keeper is employed to try and cut out this threat if our offside trap is broken.

Complete Forward A (or potentially Target Man A club dependant) – With our play still falling under an Attacking Mentality despite being highly defensive in design, I need that main man up front capable of doing all forward duties.

He’ll need to work hard, make runs into space, pick out a pass whilst still having that ability to poach goals and also hold the ball up for the team.

It’s a lot to demand of a striker, but in this type of system and way of playing do make sure you have a striker that ticks all these boxes.

(I also believe a Target Man on Attack duty (Didier Drogba style) will work as well the way this system plays. Currently this employs a Harry Kane type striker).)

-Show all opposition wide players feet to the touchline

Clear cut chances – down to the Minimum

As mentioned, allowing the opposition as few clear cut chances as possible was an objective here.

We came up against sides that played a highly offensive / controlled approach that would starve us of possession meaning our back-line would be severely tested – and in big games.

Despite PSG battering our goal in Paris and trying to overturn the 1st leg deficit, in over 180 minutes of football they failed to create one single clear cut chance.

A defensive master-class saw us through the tie where we met Sevilla in the final and comfortably despatched of them – again conceding no clear cut chances. 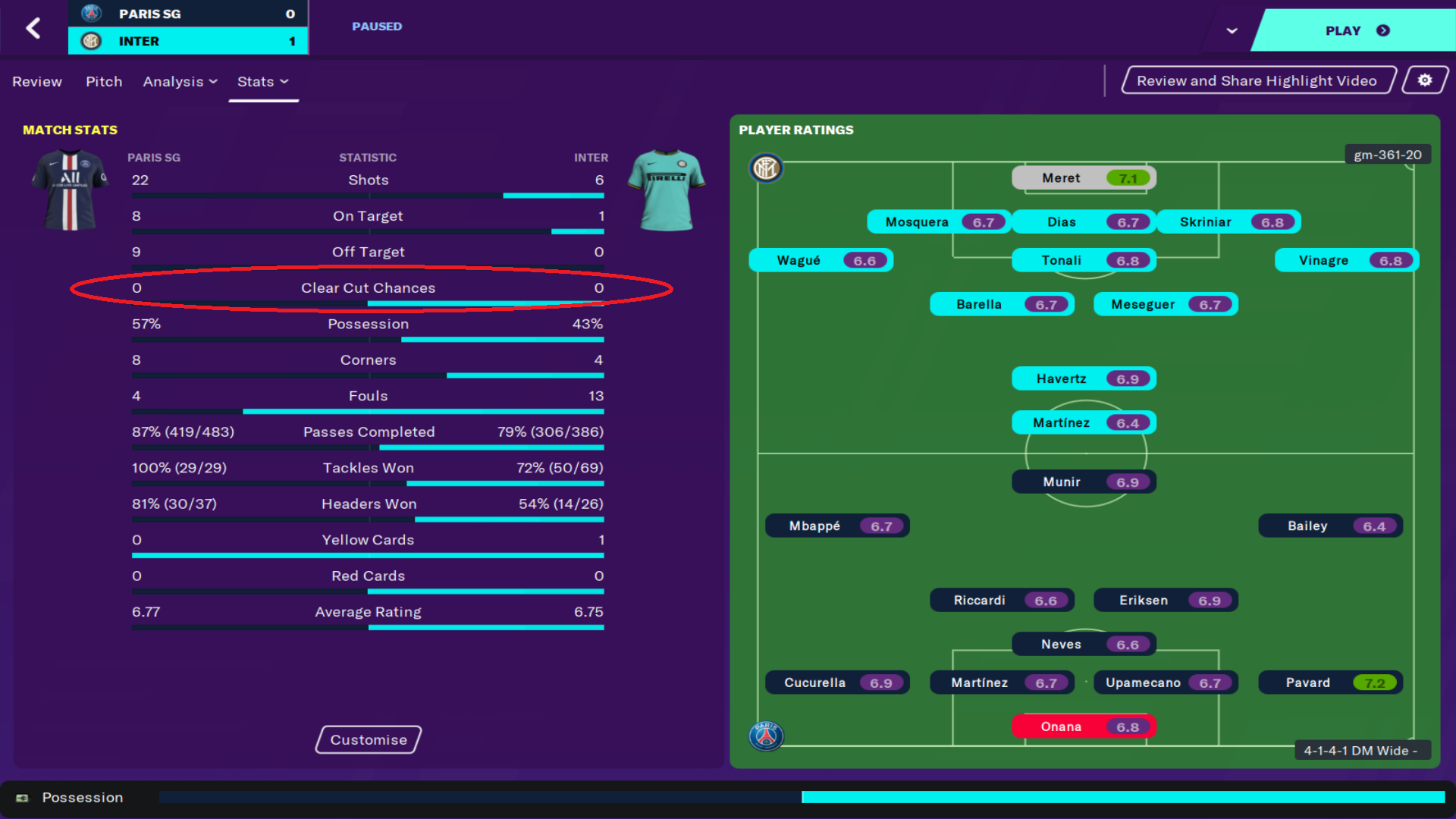 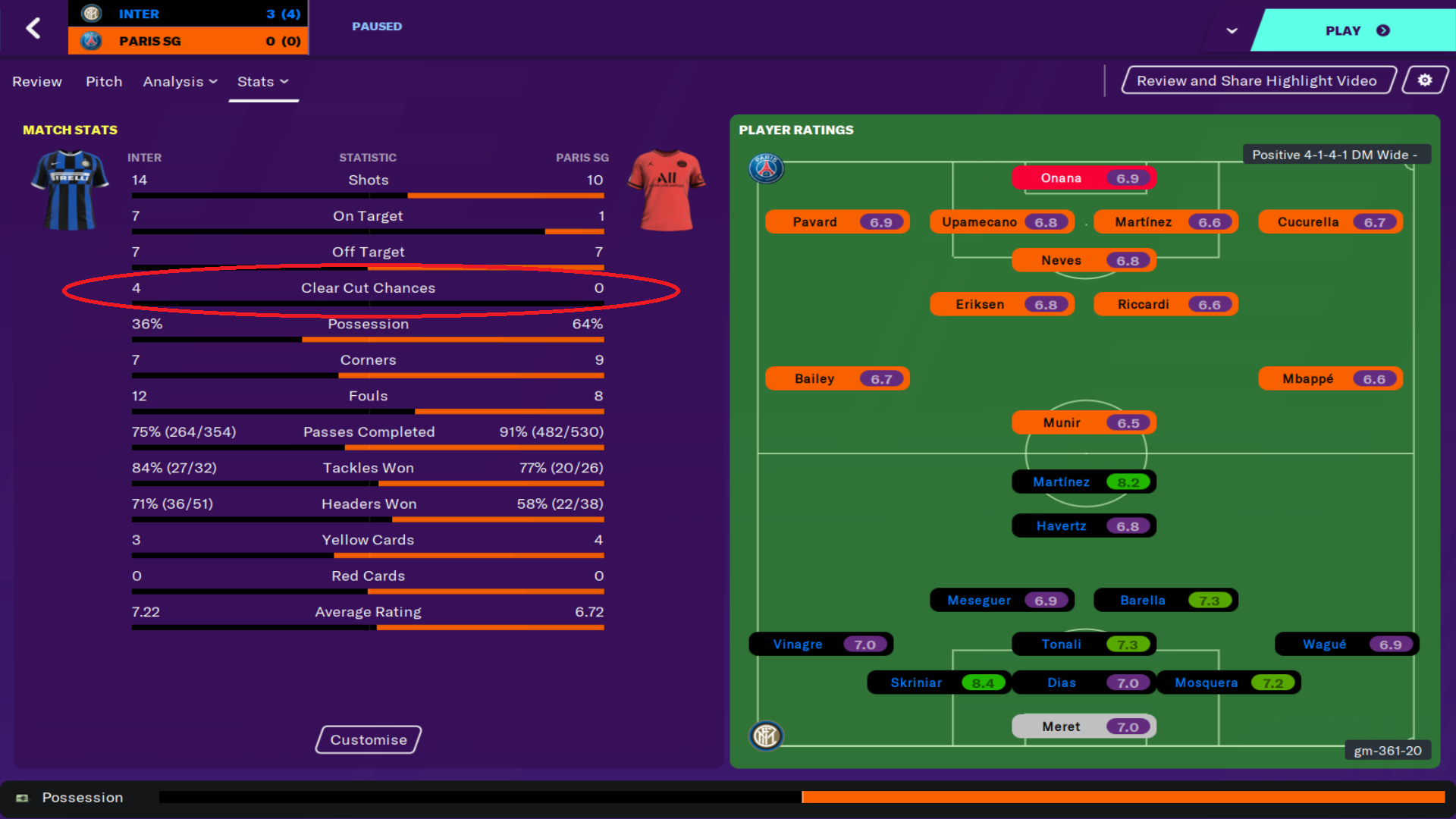 Against Lazio, much like against PSG they had the more shots – but failed to create a single clear cut chance. They bossed the game in the possession count too, but ultimately failed to breach our back-line and again we were comfortable victors. 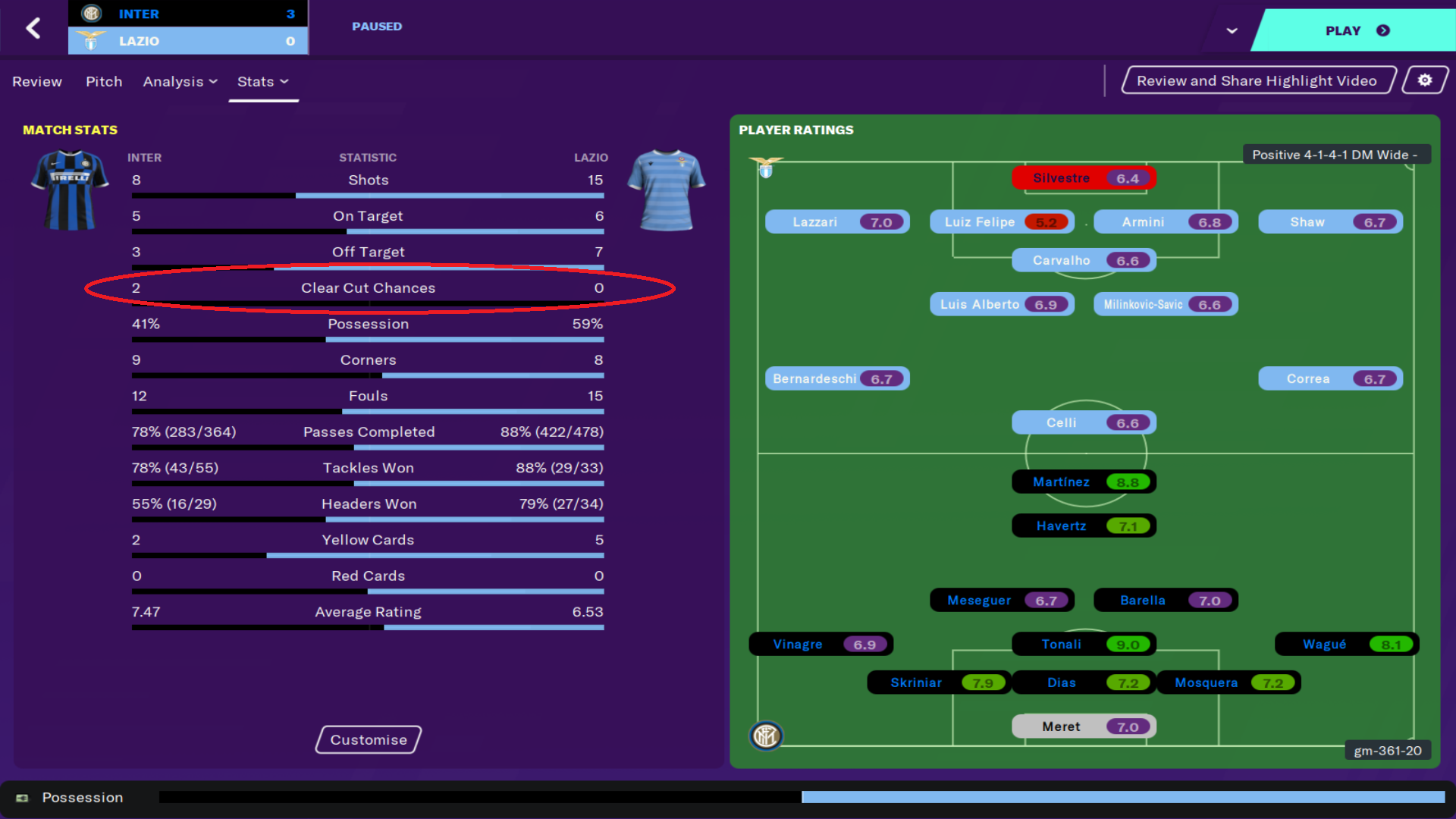 As I mentioned above, it’s not going to gain many wins in a league campaign, but rather be tough to beat. And this held true to our success.

We won the ECL against Sevilla in the final 3-0, and the Italian cup against Lazio with the same scoreline conceding no CCCs in either final.

So it was a tough, but satisfying treble we accomplished in this particular season. 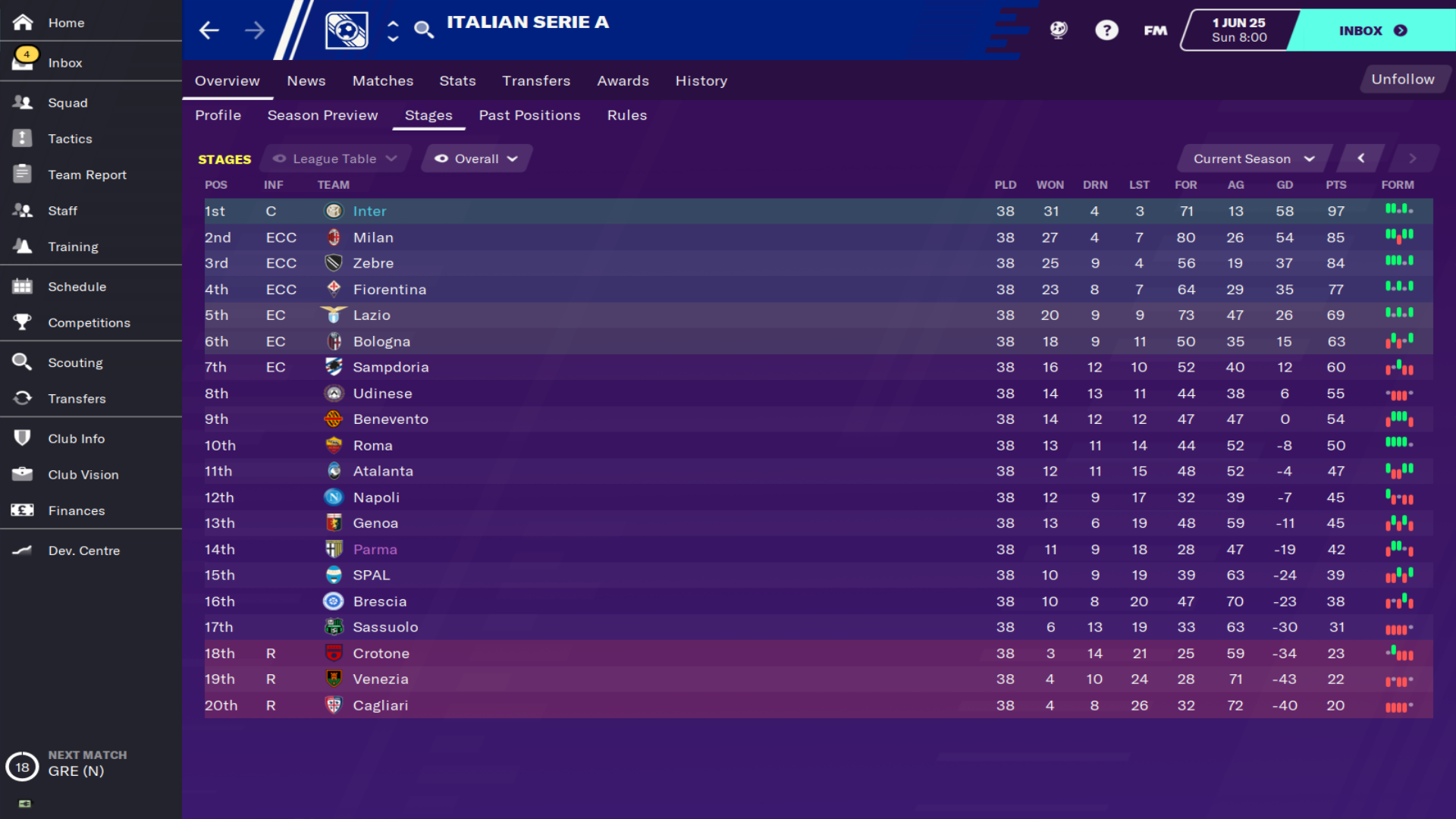 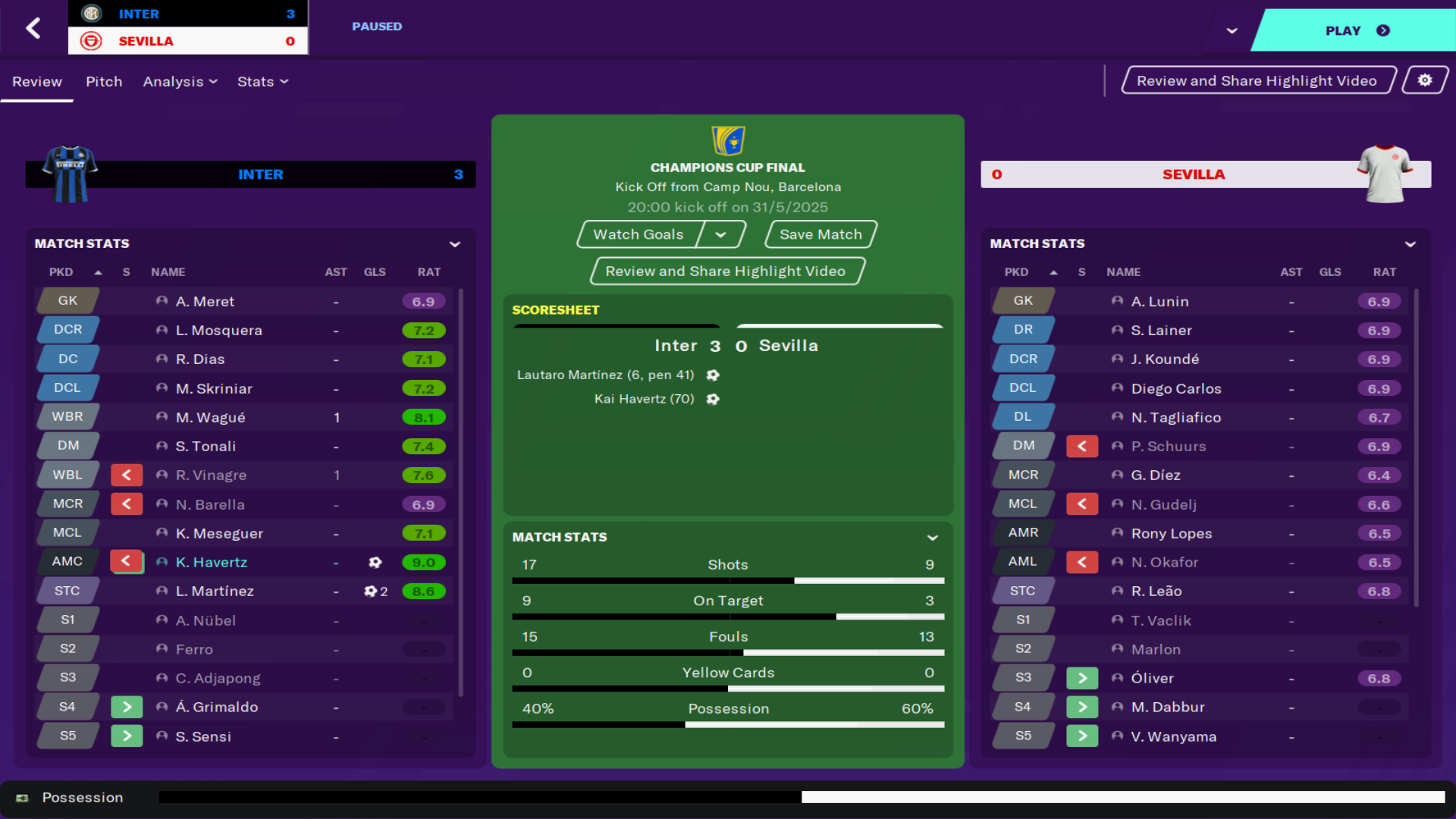 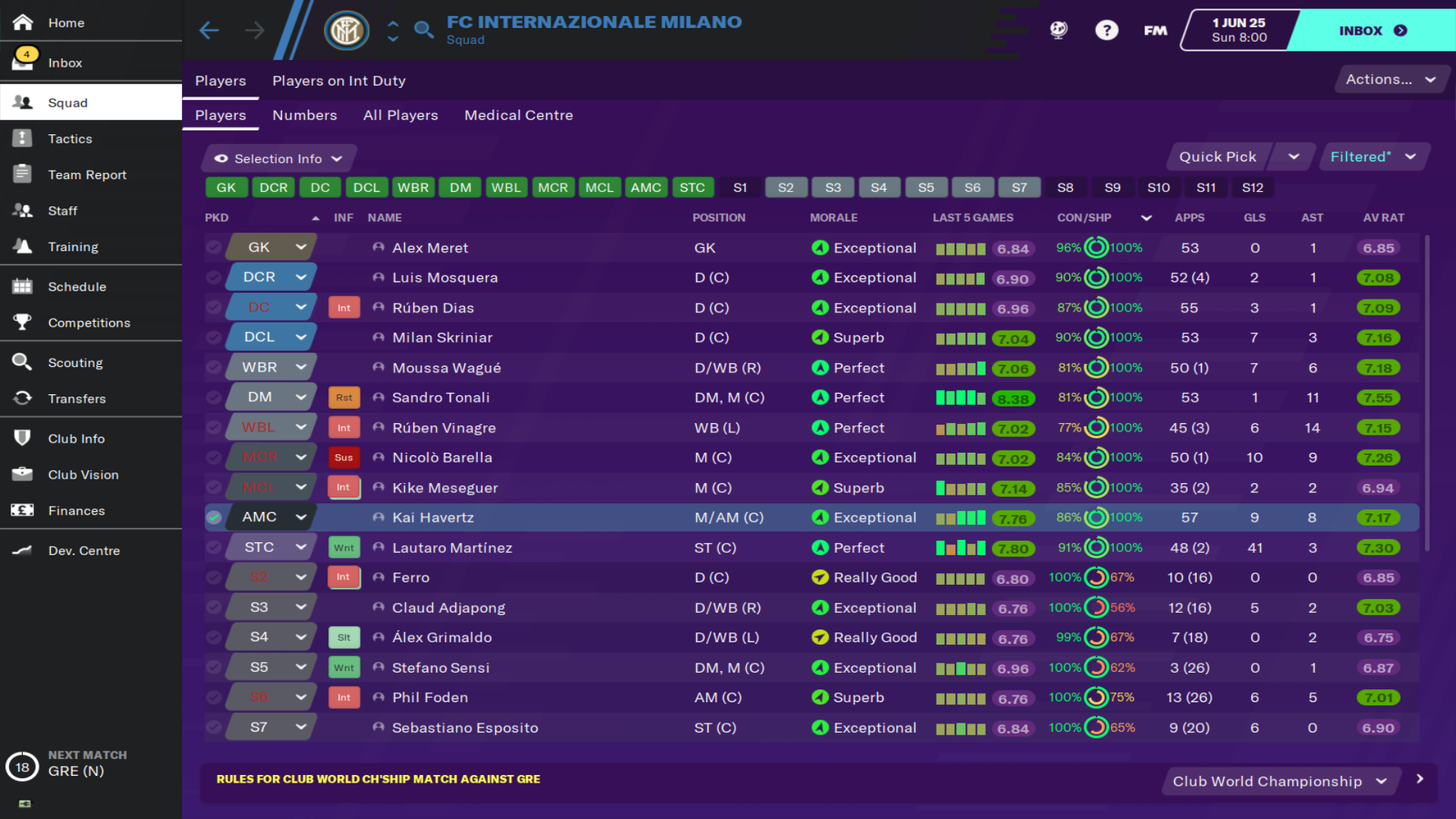 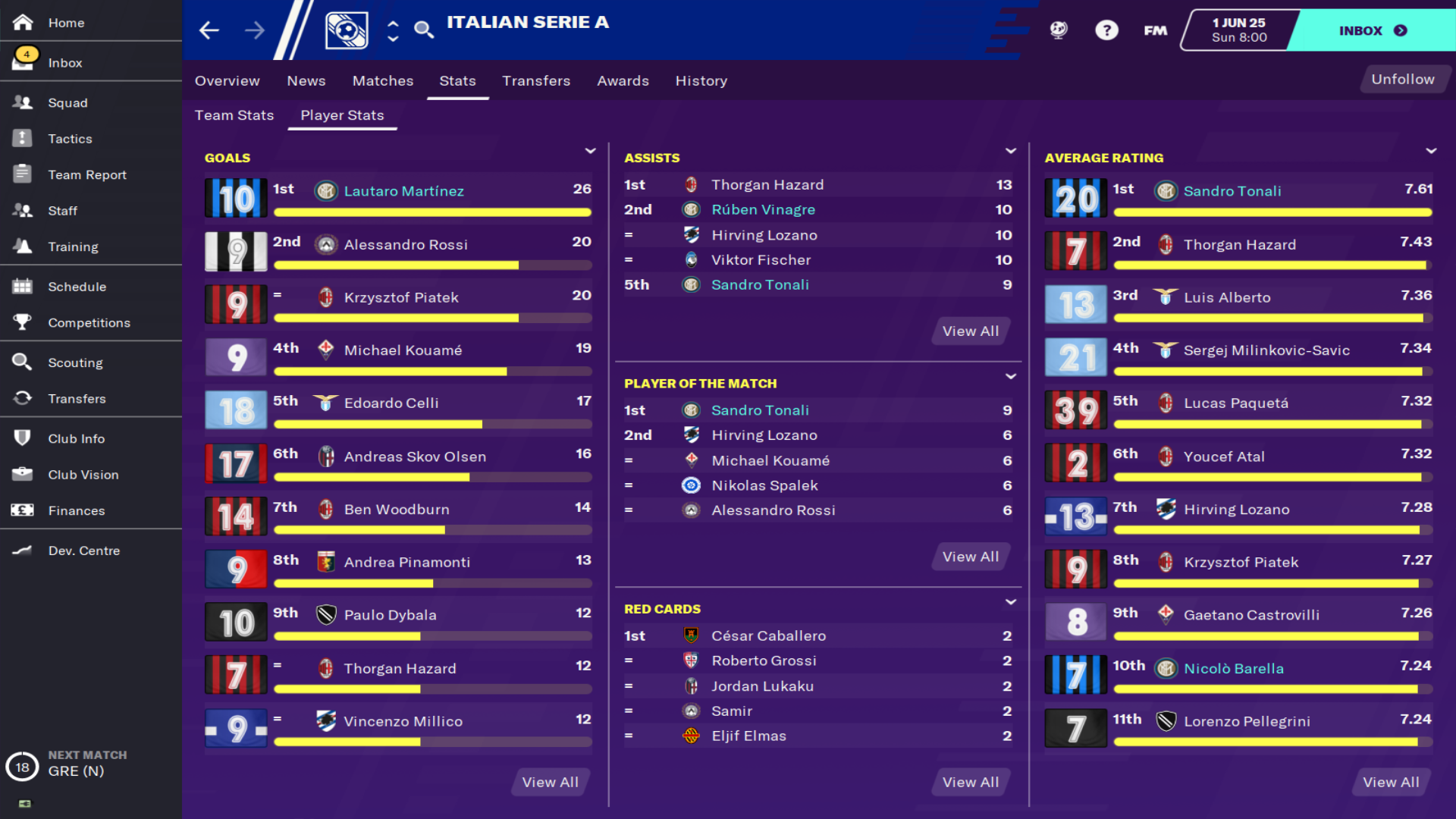 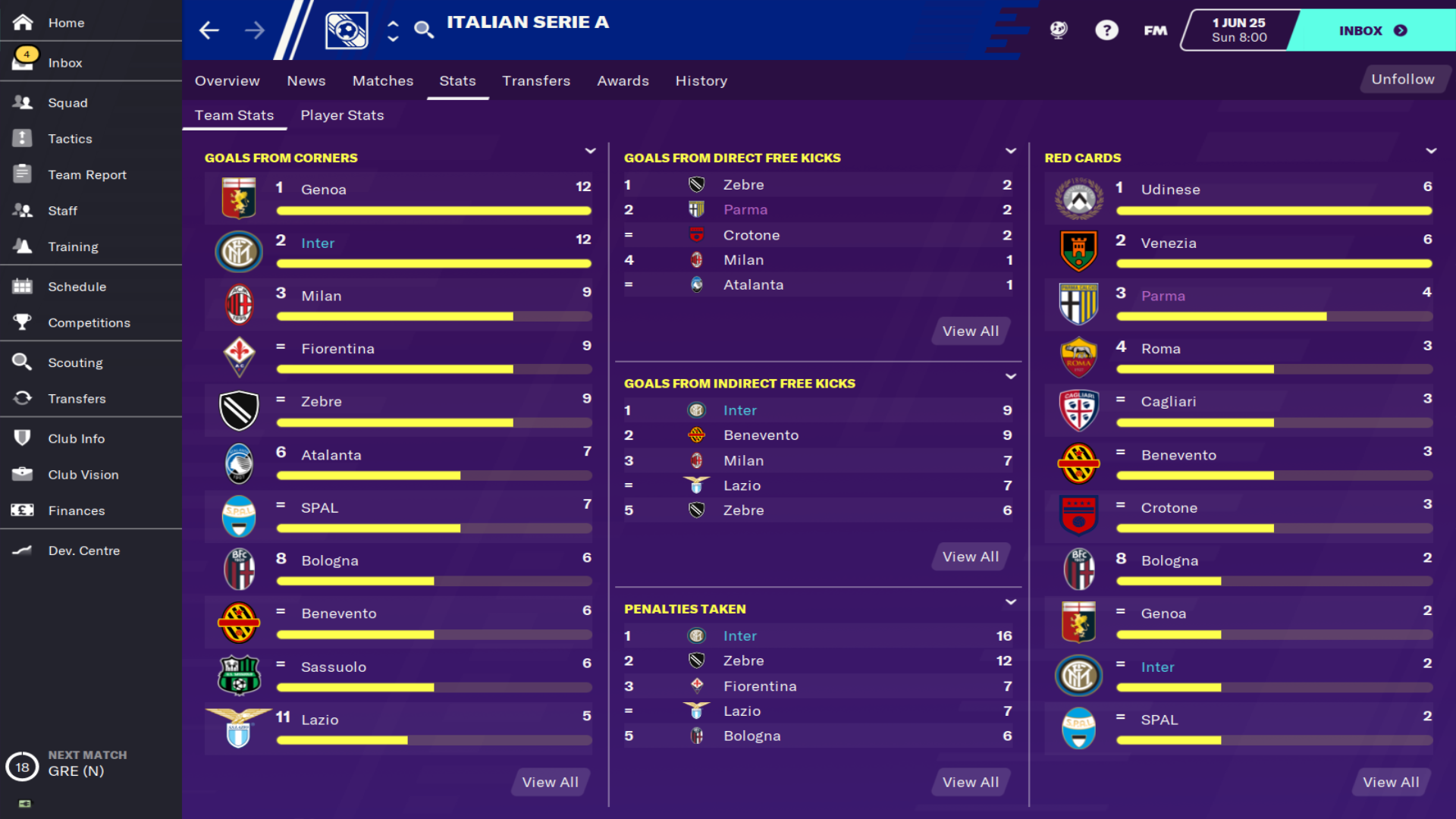 With the specific brief I made for myself, this is one of my favourite and rewarding systems, and the Enganche role clearly can work well being used as a defensive tool.

Attacking with an offensive mentality when in possession of the football, but very defensively sound without. It’s definitely designed to be a system where it’s not the possession that counts – it’s what you do with the ball.

If you don’t have a Complete Forward available and are with a lower side – give the Target Man Attack / Drogba role a try changing the PIs accordingly, as I believe this is highly suitable for this formation.

It may not be the golden system out there for simply beating the game, but if you enjoy watching your side play smartly, solidly, frustrating the opposition where great satisfaction is gained from clean sheets and pinching tight games 1-0 then this tactic is one you may enjoy.
Reactions: ShikariFC, hal107, Babemocni1988 and 2 others