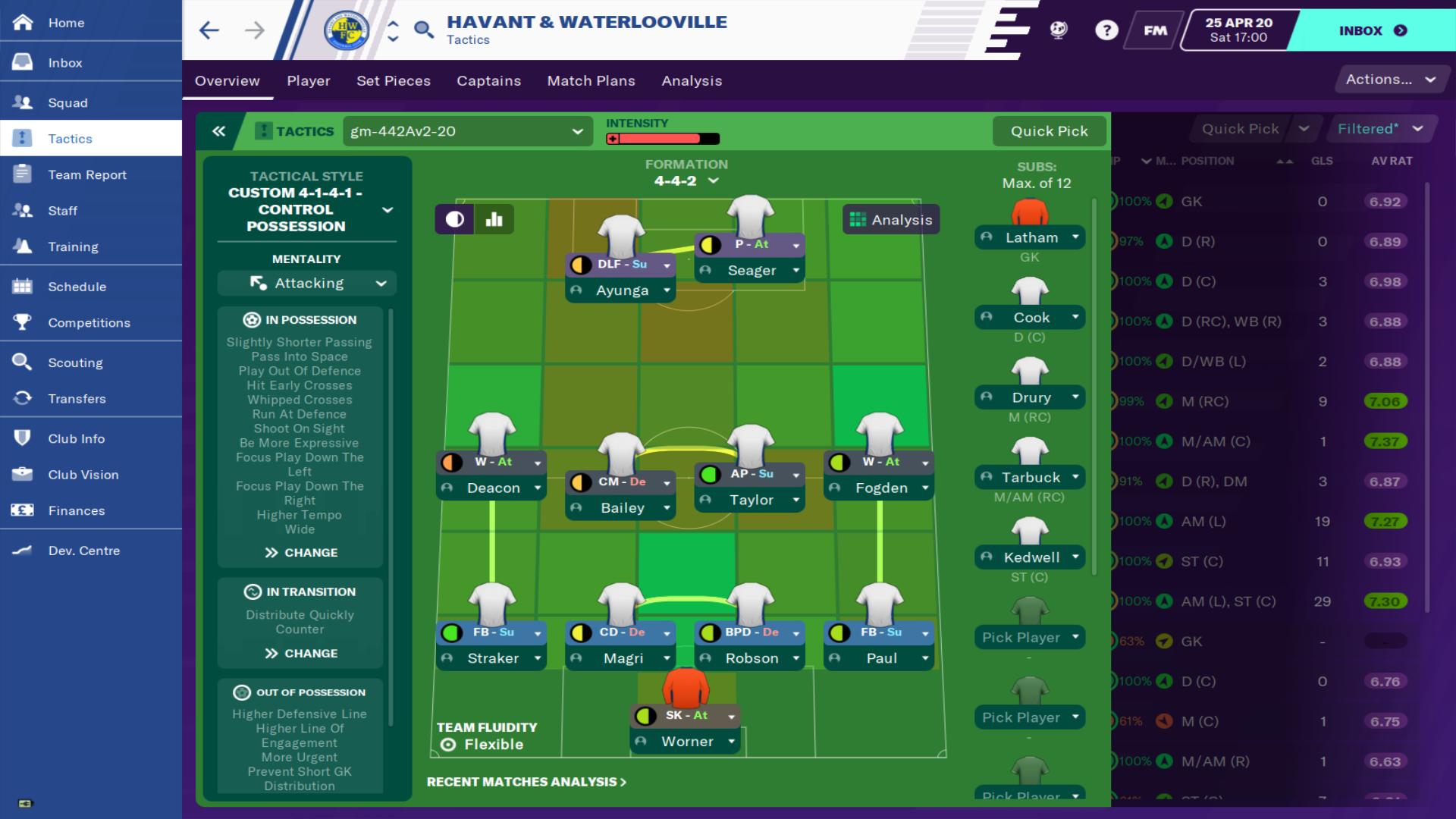 Unfortunately when FM Base lost a lot of content, the thread I had on my original version was lost in the process. The tactic appeared successful ever since it’s creation for the Beta at both lower and higher tier levels.

It has needed an update on the v latest patch, and so I have made a few logical tweaks to the tactic. (PIs)

Given my original post was lost, I thought it may be an idea to re-create a single thread (with a rename) for the system as from those that I have created, this is my most successful and balanced tactic as a whole that can be used at all footballing levels and nations.

The key way in which this was designed was from the inspirational figure Sir Alex.

Fast tempo, wide attacking football whilst bombarding dangerous crosses into the box for the poacher Ruud Van Nisterlrooy to dispatch the ball into the back of the net.

It has the roaming deep-lying forward support role of Wayne Rooney, dropping deep to help mechanise the play, bringing creativity to the offensive third whilst chipping in with his share of goals.

Two out and out wingers is what I’ve employed down the flanks, with symmetry bringing penetration to the waves of attacks we’ll be making to the opponents goal.

And in the middle of the pitch, Scholesy bossing the game from the midfield position which he holds and dictates the play, switching the ball from flank to flank. And the destroyer in Roy Keane giving the side a solid defensive presence to thwart the opposition.

Defensively an emphasis is shown with teamwork to play an effective offside trap. A high line, high line of engagement and more urgent pressing used whilst counter-attacking at every opportunity we get to do so.

And not forgetting Schmeichael in goal – key in launching quick counter-attacks from deep in an attempt to catch the opposition off guard. 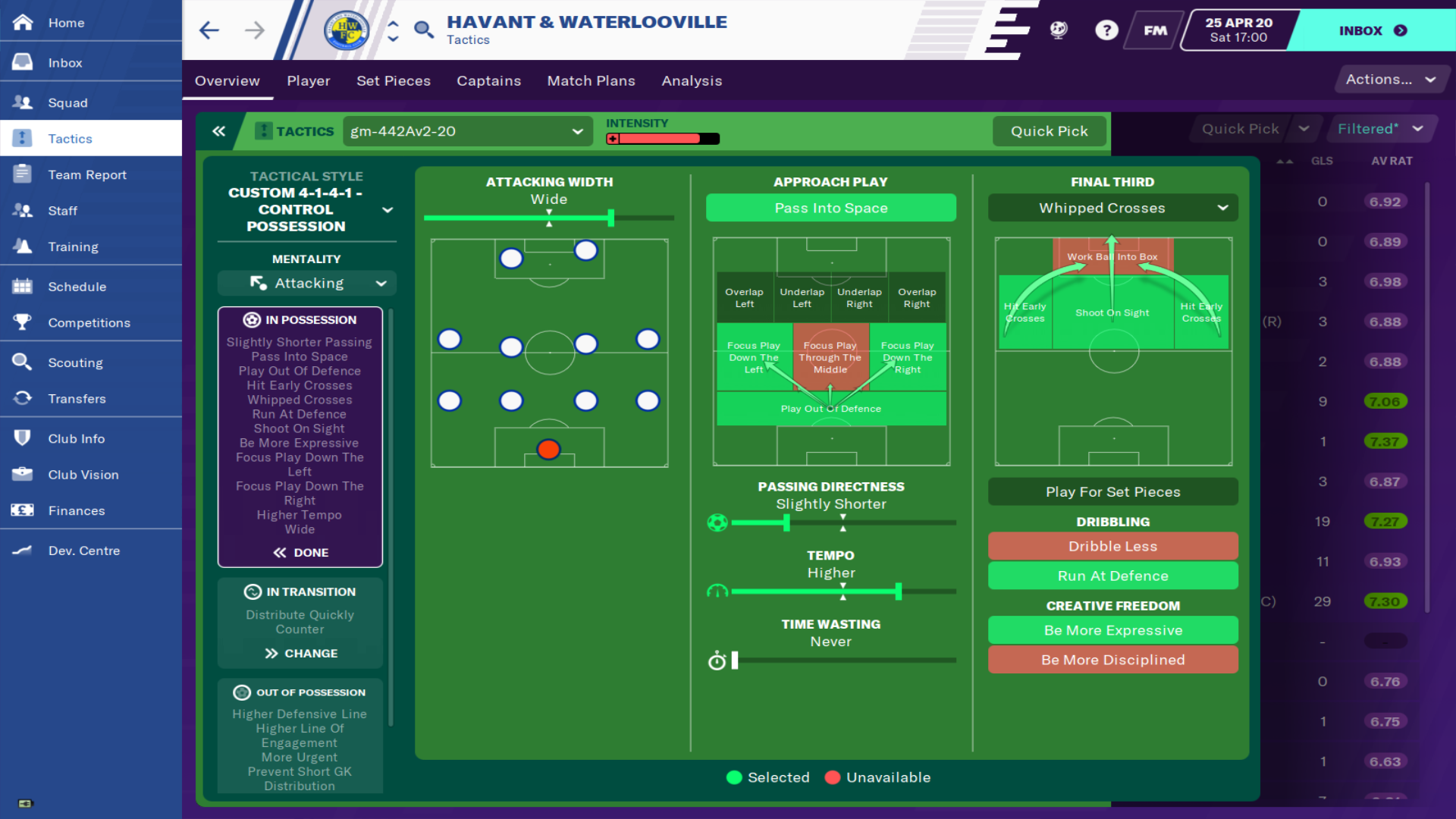 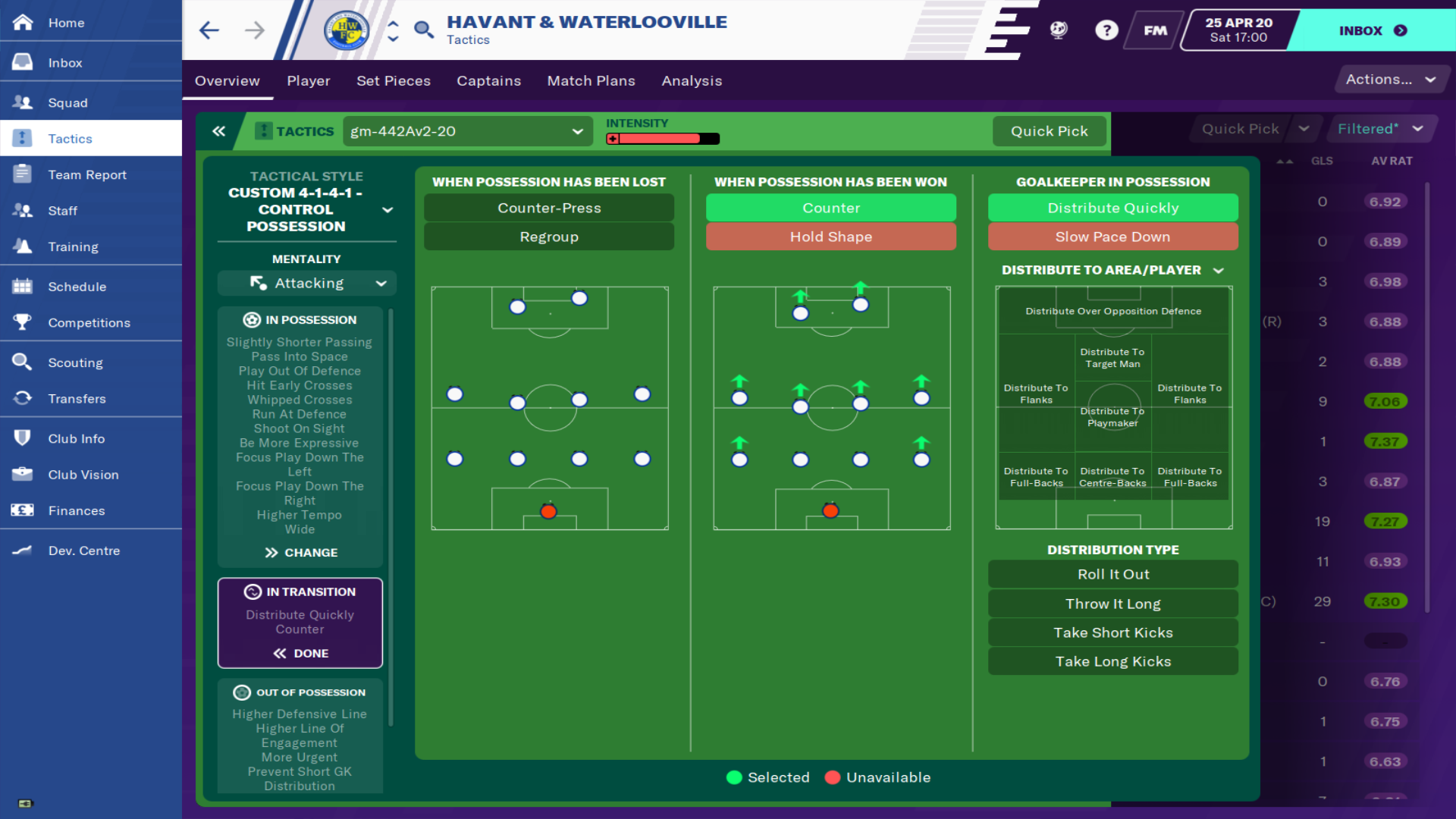 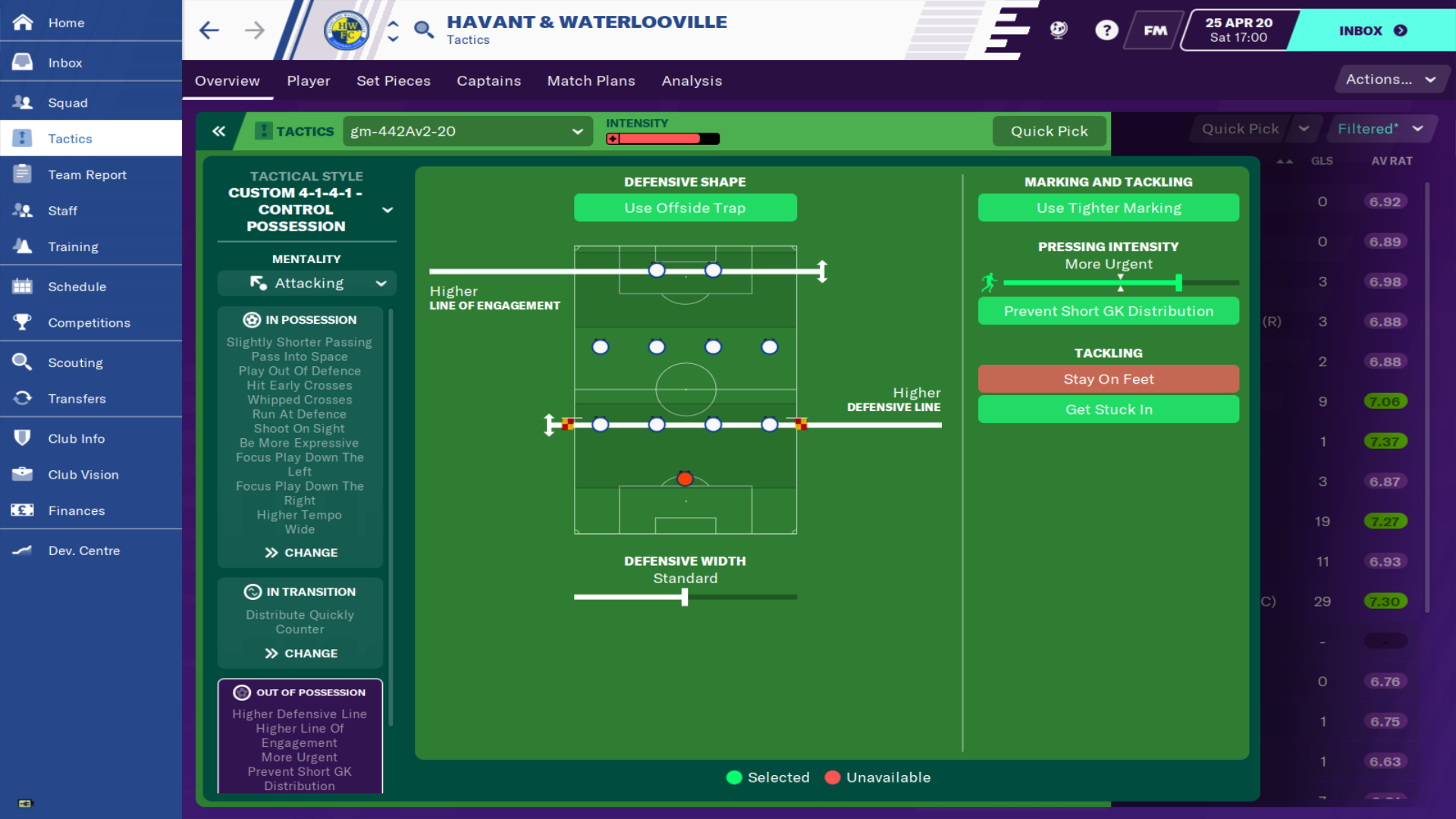 -Pacey wingers that can deliver a cross

-A poacher in the Van Nisterlrooy mould and a creative deep lying forward in Rooney.

-A fairly quick back-line as it does use a high line and loe.

-A hard working side, as in a 442 you’ll often be outnumbered in midfield

This will force the opponents to try and attack in the less desirable parts of the pitch, moving away from goal (esp inside forwards) and increase their predictability .

My highlight on a previous patch was conceding just the 6 goals all season with a powerful PSG side, also going undefeated all year notching up 108 points along with winning every available competition.

Given that’s on the older patch, I have re-ran a few test seasons on the very latest one – and it still remains successful with my additional tweaks included.

Picking Havant and Waterloo, predicted to finish 6th we finished top of the pile after the 42 games played with no investments.

This was a decent test because our back-line was actually very slow, but given at this level the teams weren’t good enough to punish this deficiency, it still gave us top spot which was quite an achievement.

We also got to the 4th round of the FA cup which was a bonus. 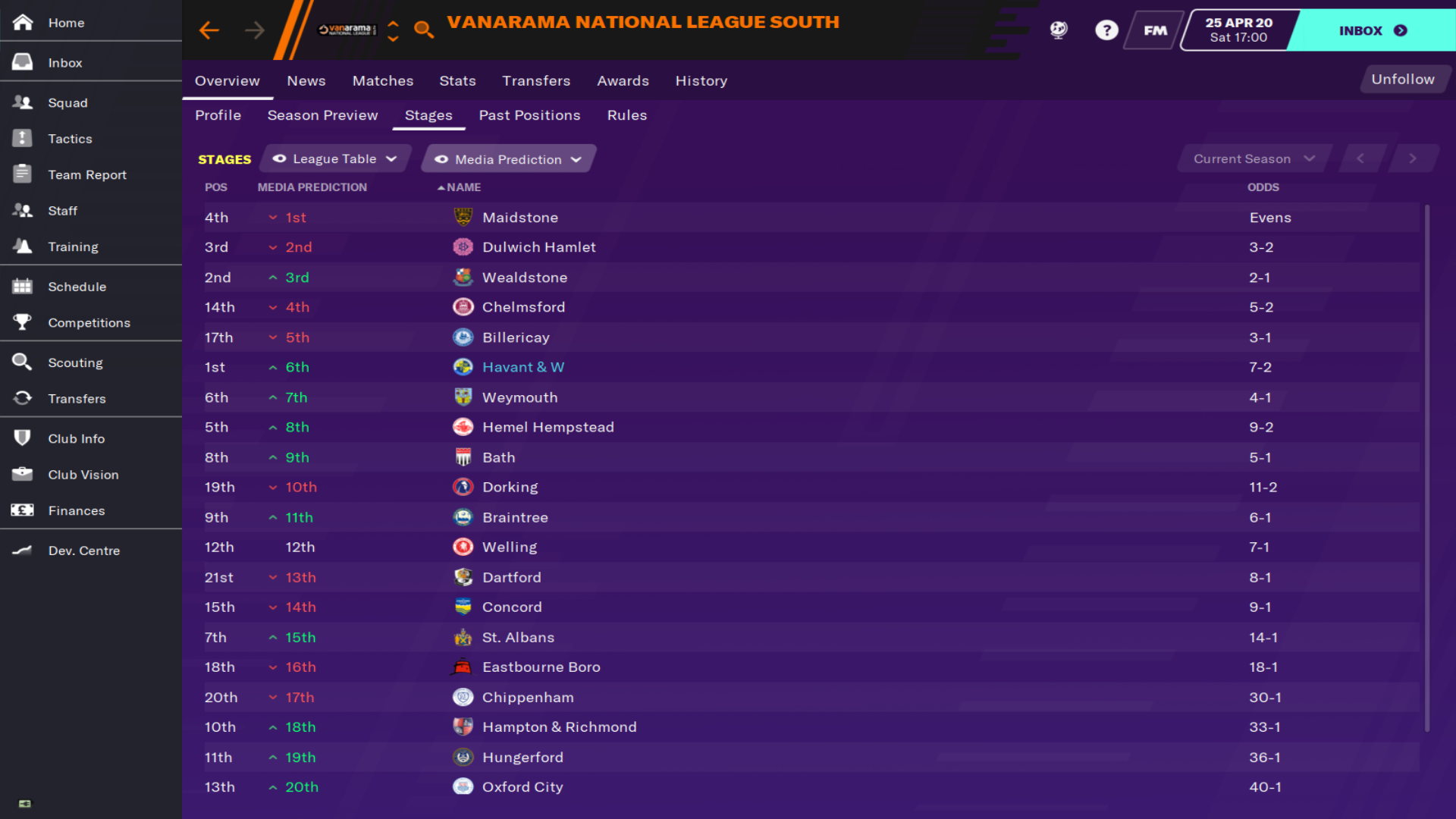 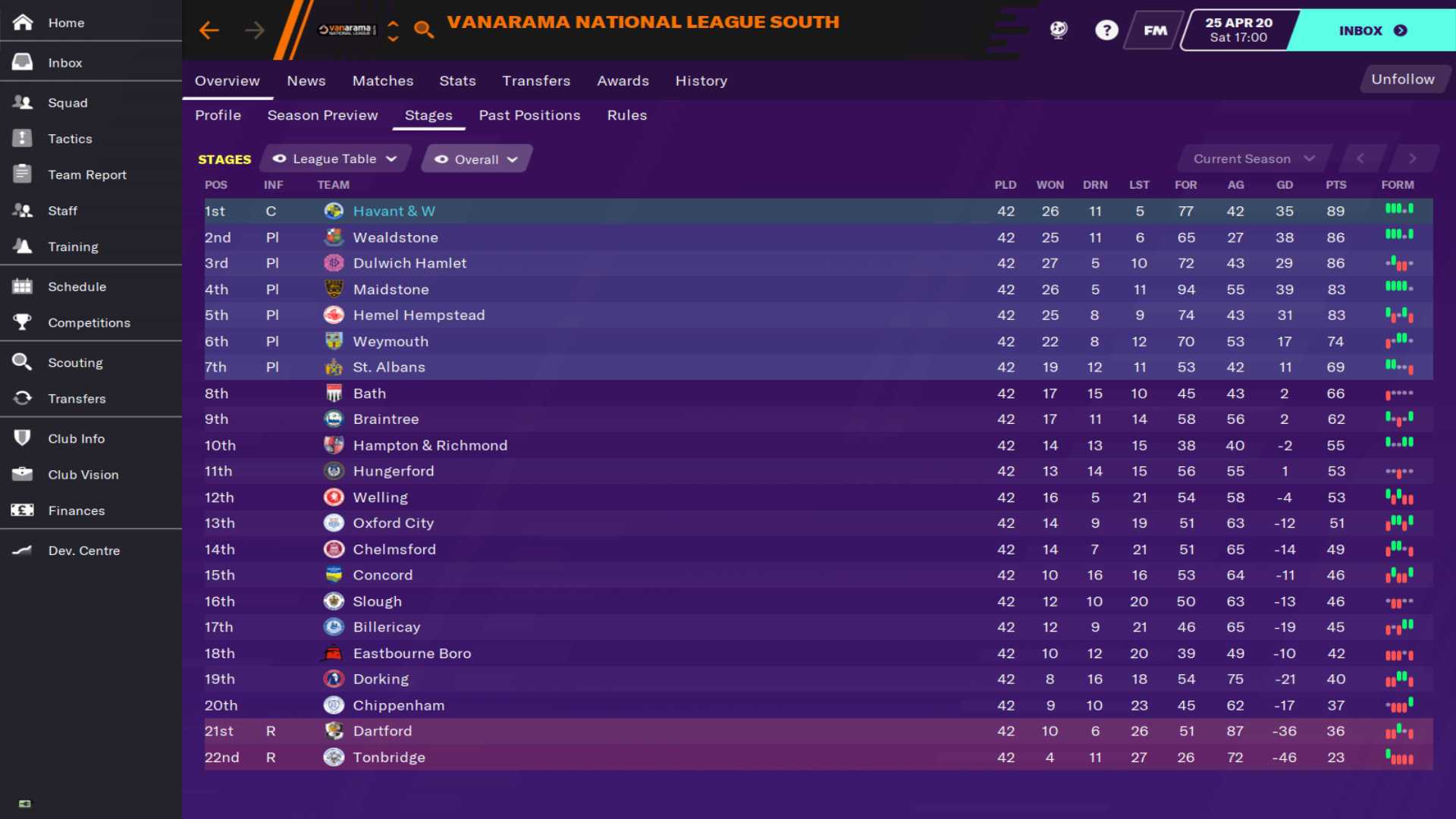 The most tactical of the 3 major leagues, would a simple attacking fast pace 442 work in a defensively punishing league?

With a talented squad and an investment in a natural winger in Conan, we went through the whole league season undefeated. Winning 30 games and drawing 8, we ended up on 98 points. This in addition to winning the Italian Cup and the ECL vs Real Madrid, though they did put us under the cosh after we went 2-0 up. 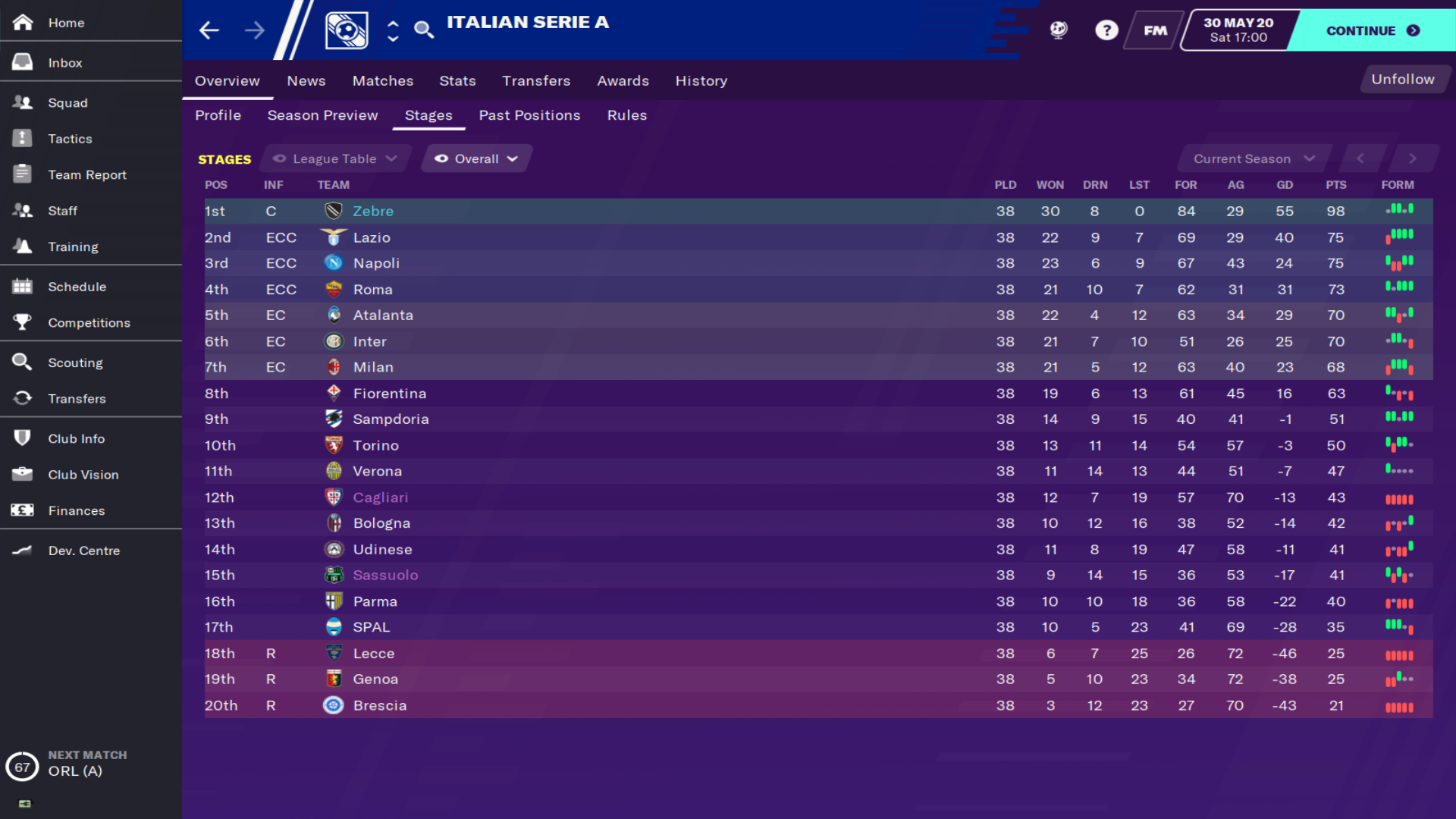 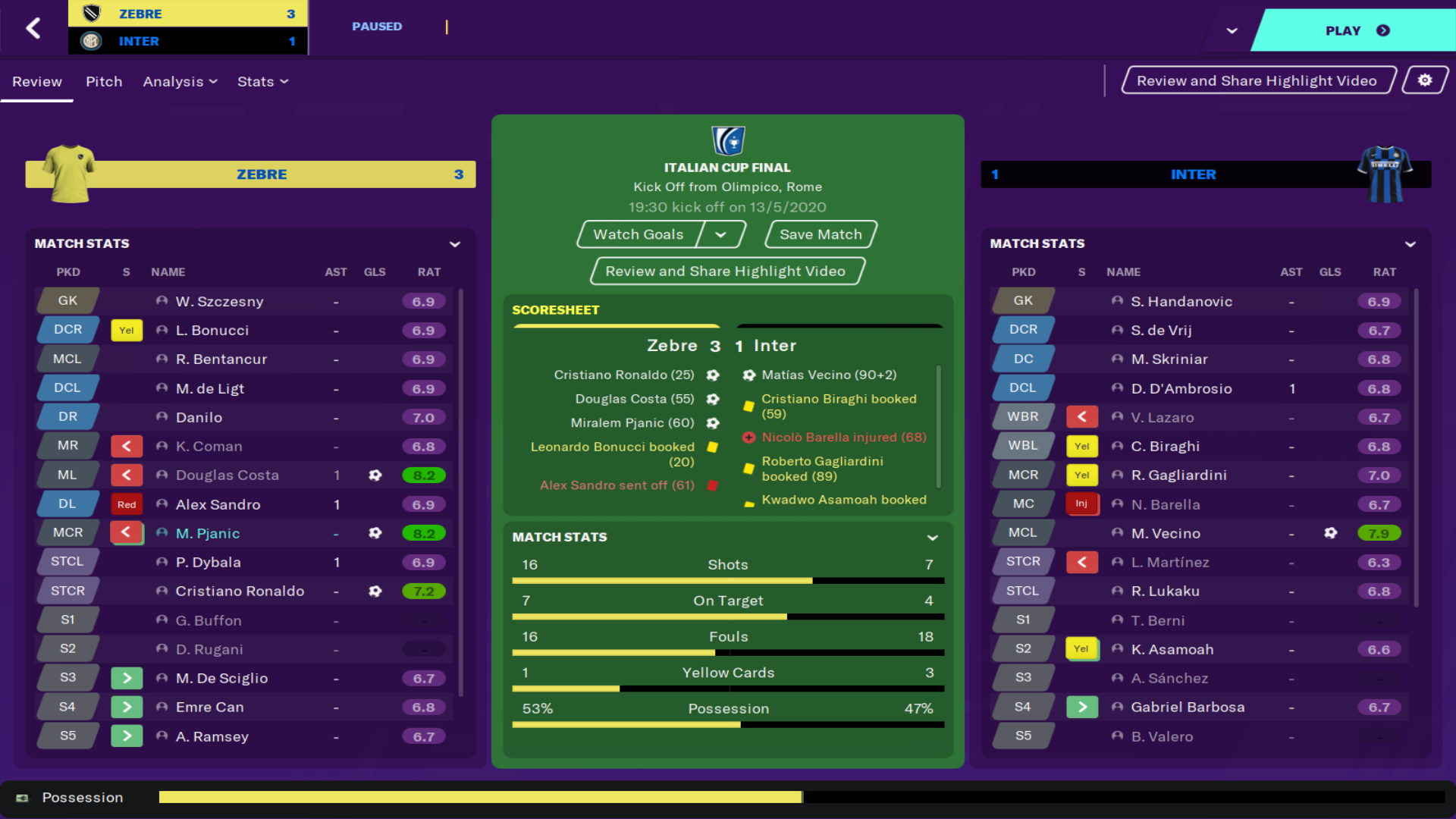 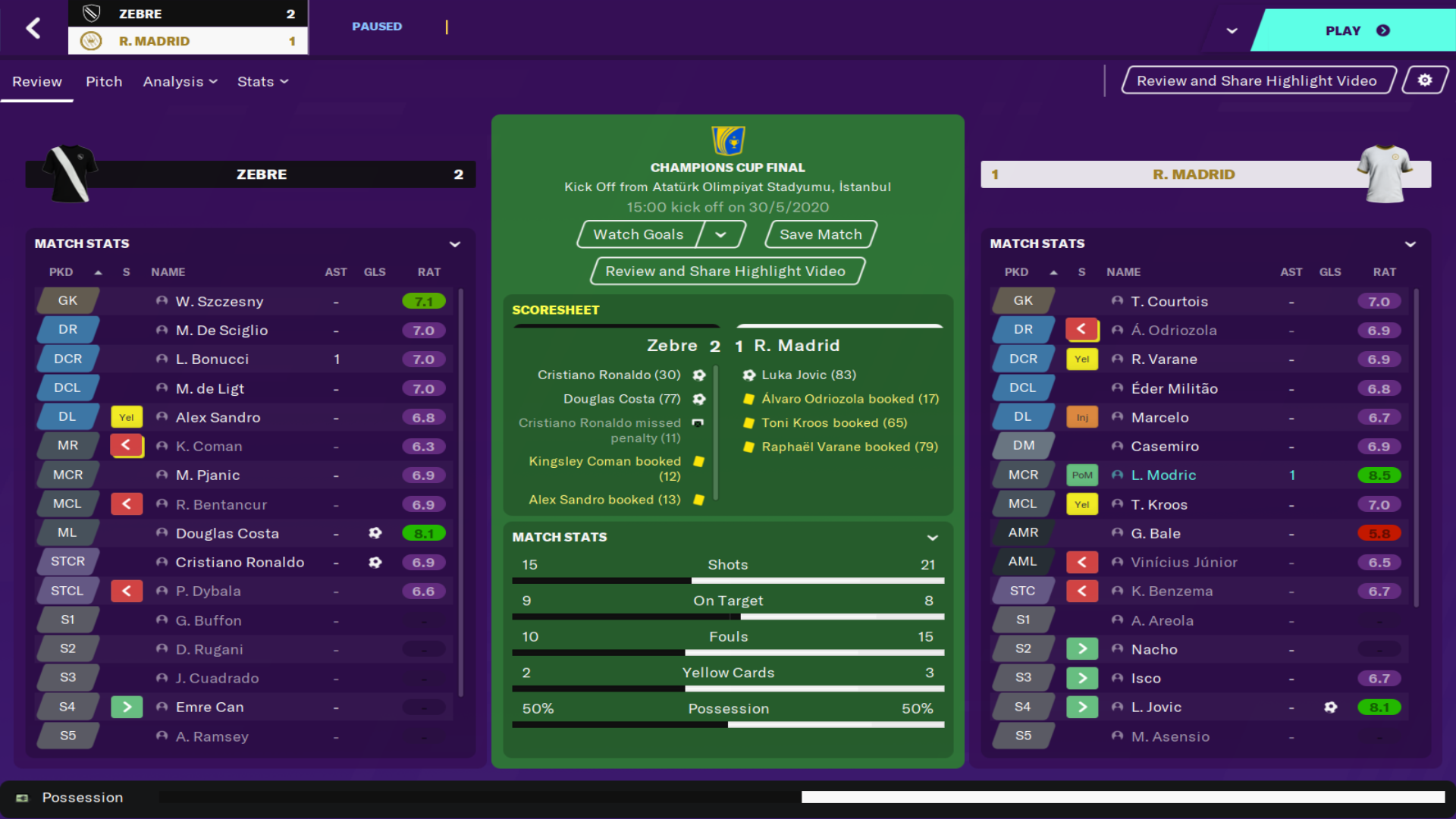 A few seasons on an old save where I had a squad to test it out. Liverpool were very mighty in this save and this funnily enough replicated last seasons 2019 year – we won the league with 98 points, and Liverpool ended up on 97 with a 1-0 away win at Anfield near the end of the season leading us to snatching the title.

We also won the ECL against Barca in extra time, in a much more dominant display. 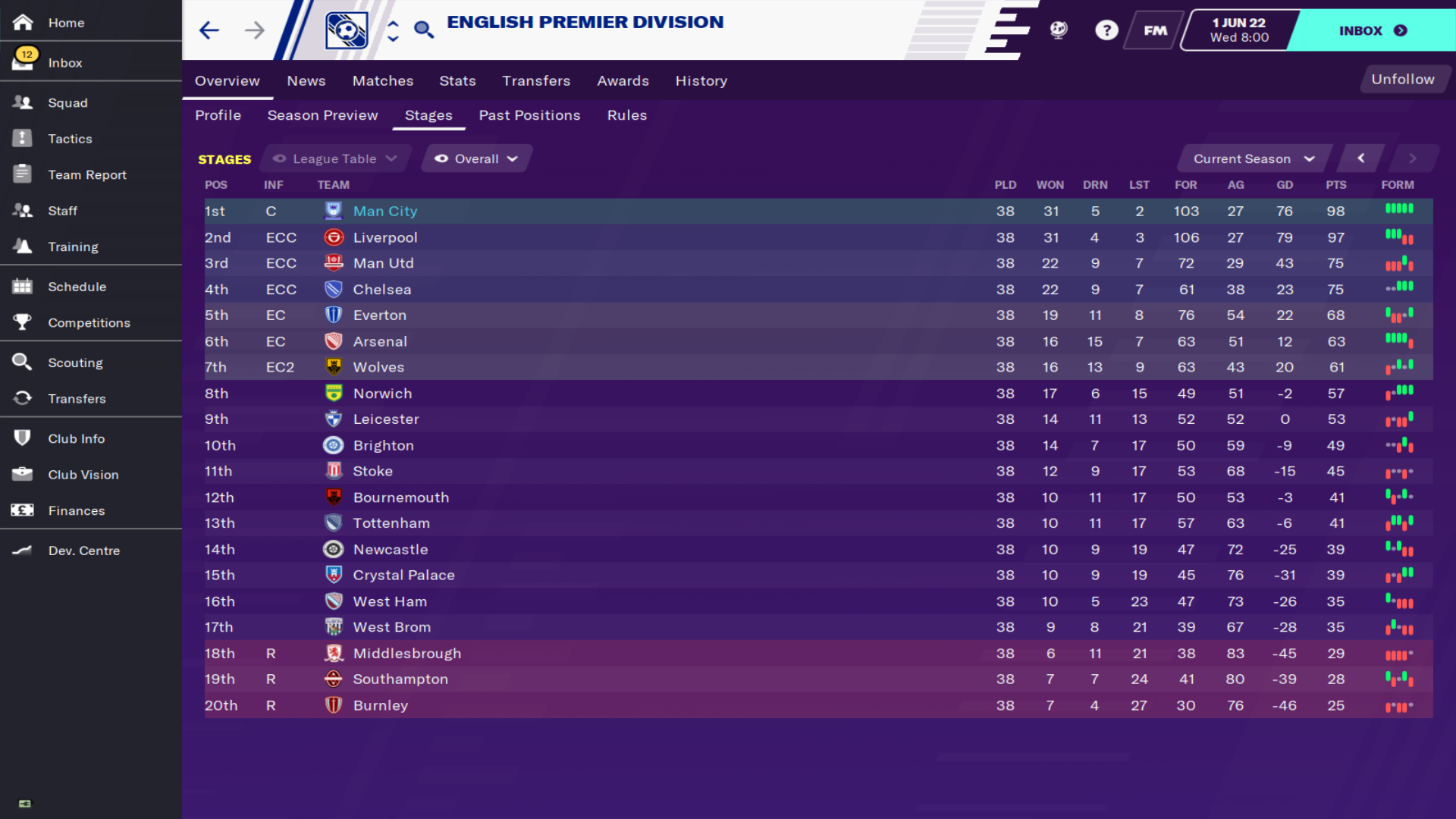 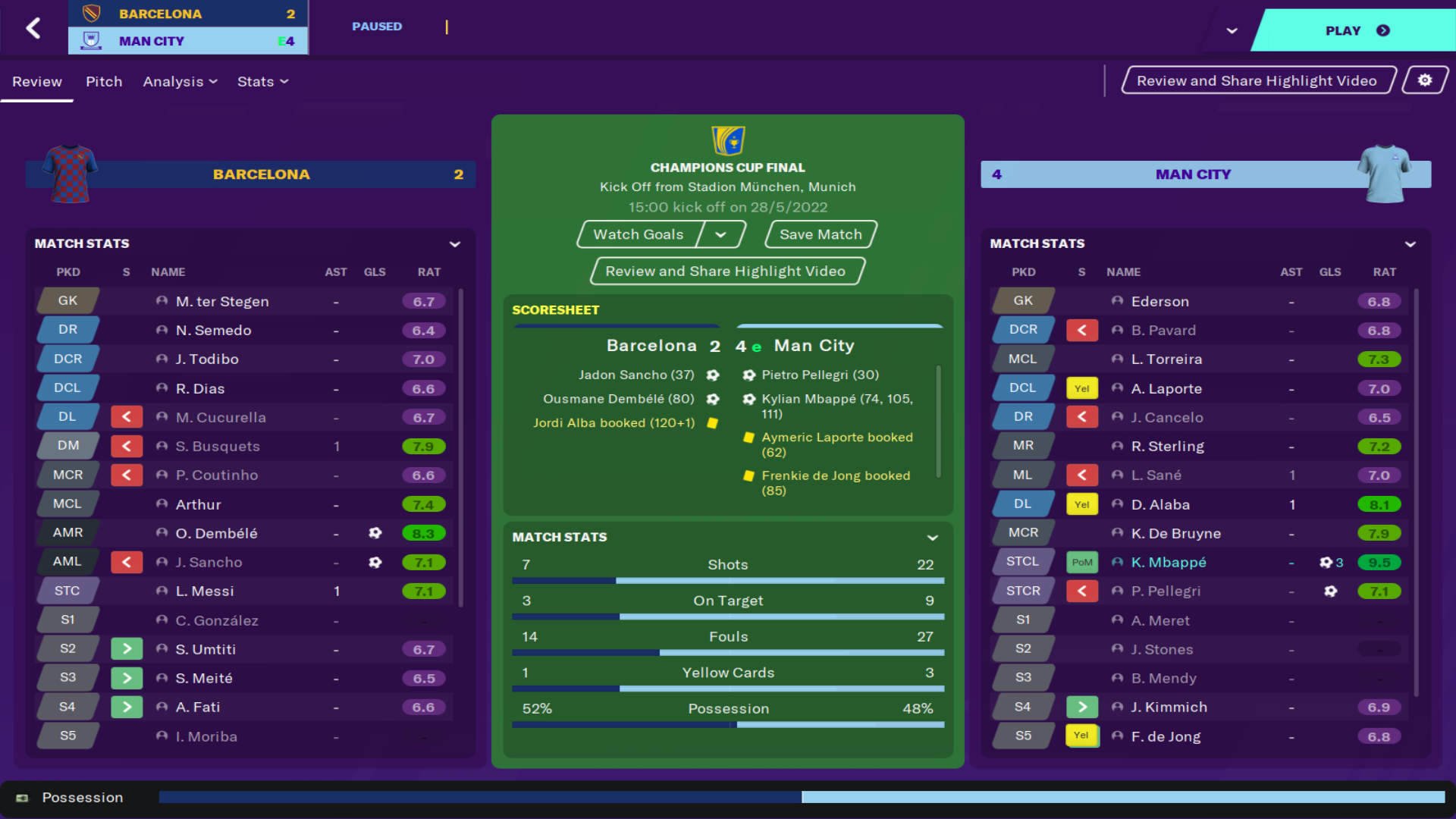 So it can get you out from the very lowest tier of English football with a slow defence not suited to the system, to also achieving success on the big stage all whilst playing attractive and attacking British football.

Of course you will need quicker defenders in general, as when the quality of the opposition increases you’ll get punished.

Otherwise if the oldskool United in it’s prime appeals with a tactic that can work well at all levels, whilst implementing two out and out wingers for the added simplicity then this tactic should do a good solid job.