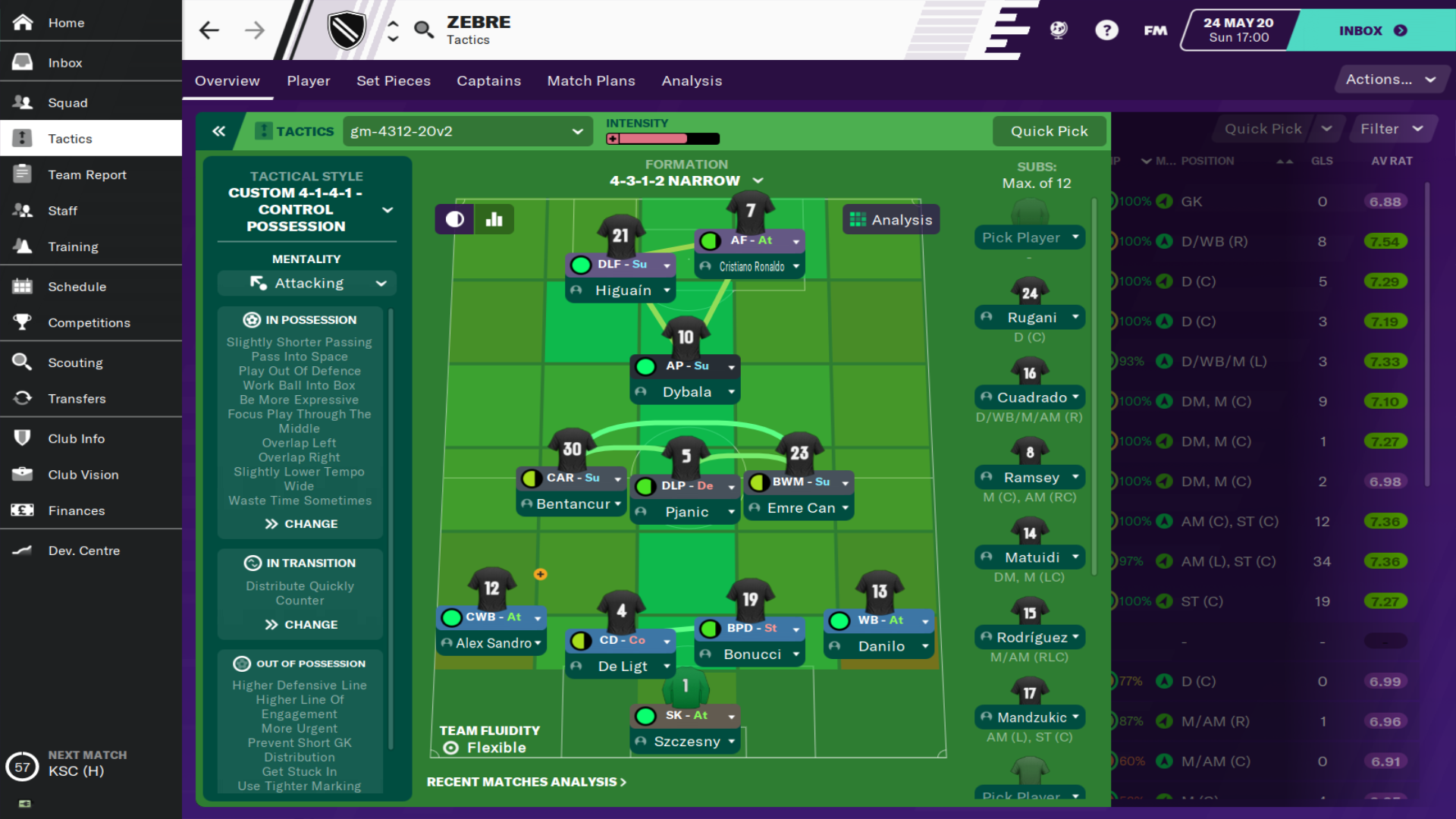 This is my diamond system for this year’s version. I’ve always loved the diamond, and it’s a shame the system has died a death as the system simply doesn’t work in the modern day. So it was a challenge getting something to work half decently, but I’m happy with how this systems play.

I had thought about implementing a regista styled game, but given there are no Pirlo’s any more it seemed a little pointless. And I guess to an extent it’s why the diamond doesn’t work so well now – there aren’t any world-class players that fit the system, and is in part reason why I took the approach I have here.

Both of their visions were very different. Jose a more high line and direct / counter-attacking game, and Ancelotti a shorter and tidier game with the dictator in Pirlo.

I’ve decided to combine both, and use the 4312 shape. I’ve taken the shorter and creative game from Carlo, and the Counter-attacking style from Jose. So I guess it’s a balanced one.

I’ve always liked a degree of symmetry in my systems. However I’ve tried a completely different approach to my normal one. This tactic will have 11 different player roles across the pitch – and I think they combine well.

I’ve implemented the Shuttler Ambrosini and Ball Winner in Gattuso with the more creative Pirlo as the central three.

I have the stopper cover combo used in Ancelloti’s Milan sides. And I have the different wing-back roles in play, with a roaming Complete Wing-back on the left working with our Carillero / Deep Lying Forwad on support, and a standard Wing Back on the right working with our Advanced Forward and Ball Winner support, whom will get forward quickly to support the attack whenever a counter opportunity arises.

Up front is much like the Porto combination of a deep lying forward, an advanced forward and a playmaker in Deco behind them, but one which also works hard for the team unlike the more renowned Trequartista role. It’s not a possession based system, so the Treq wouldn’t be useful here.

And our forwards will be expected to work the flanks as well, with passing into space an instruction I’ve gone for to aid the counter / more direct game of Jose.

Our keeper will have a range of distribution with an emphasis on distributing quickly to launch counters from deep when an opportunity arises, but primarily we’ll play out of defence to bring our two playmakers into play regularly. So a smart keeper will be handy.

As I’ve not used the famous Trequartista behind the strikers like Carlo, it’s a much more work-man like side I’ve produced which will counter-attack very regularly and press high up the pitch to try and win the ball, and try to exploit the opponent then being out of a defensive structure.

With the ball, we’ll play through the middle to bring both our playmakers into play, whilst trying to force the opposition to defend narrower. This will naturally leave our wing-backs extra room to attack down the flanks, with both wing-backs looking to overlap our midfield constantly. 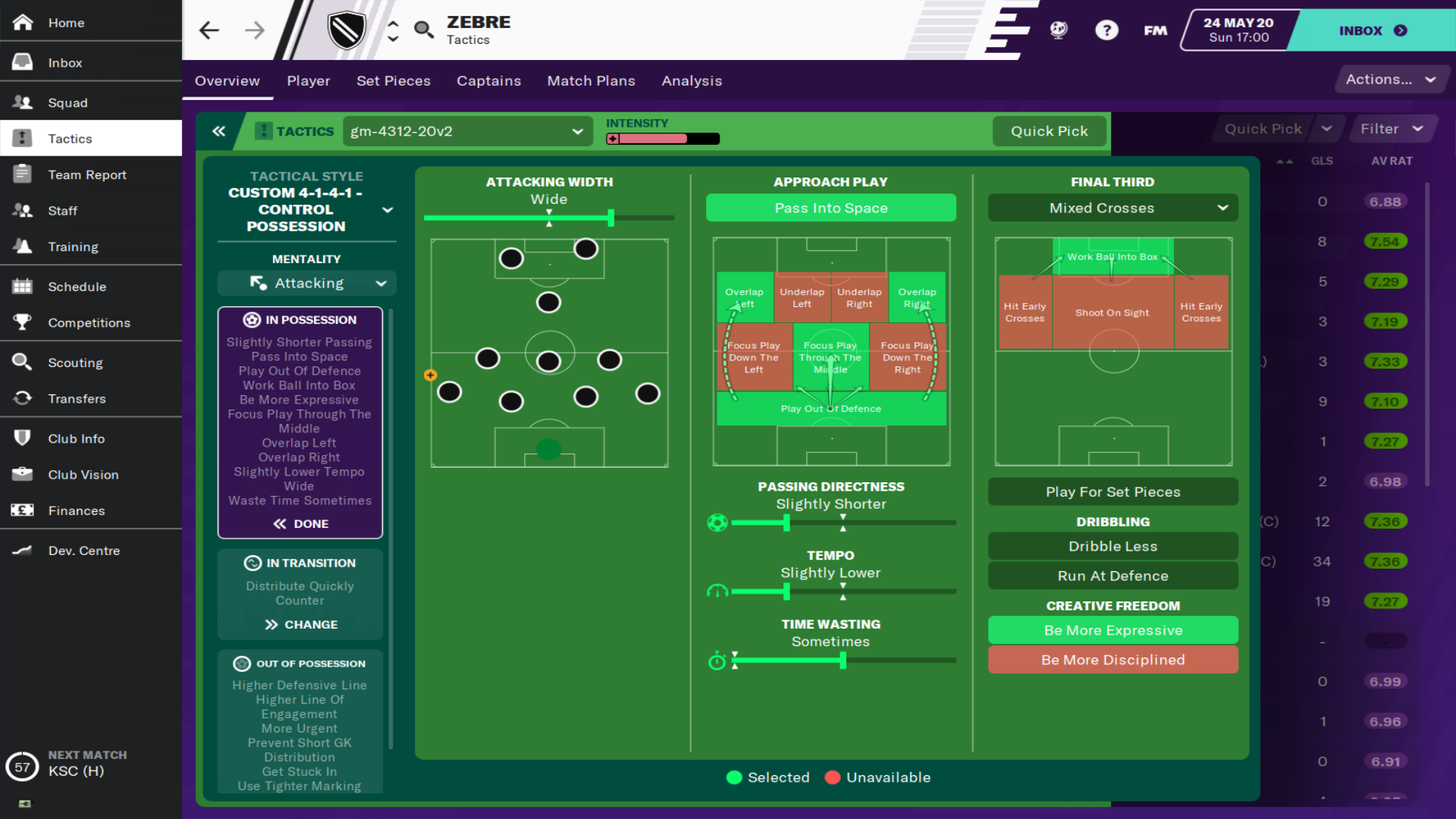 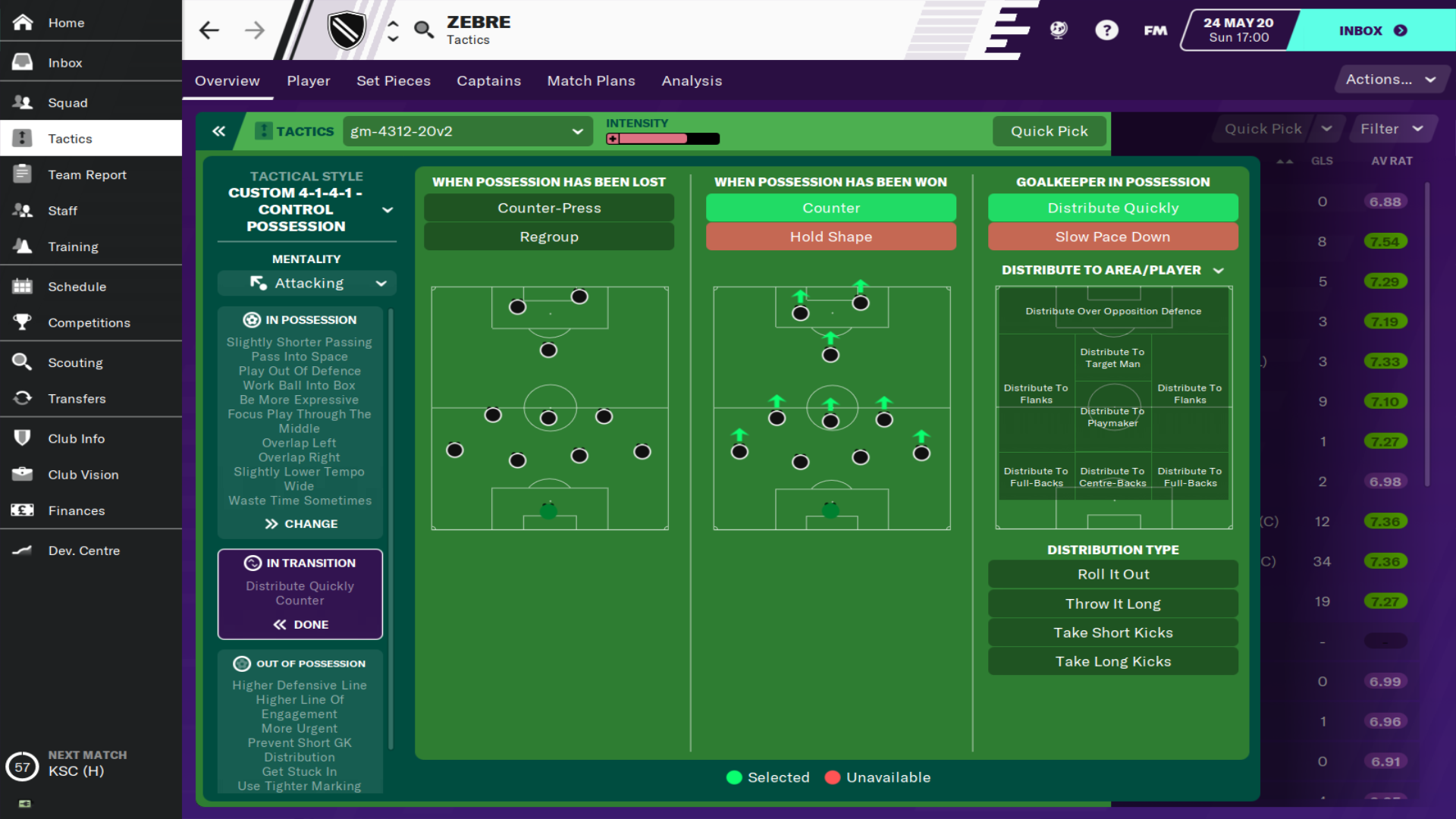 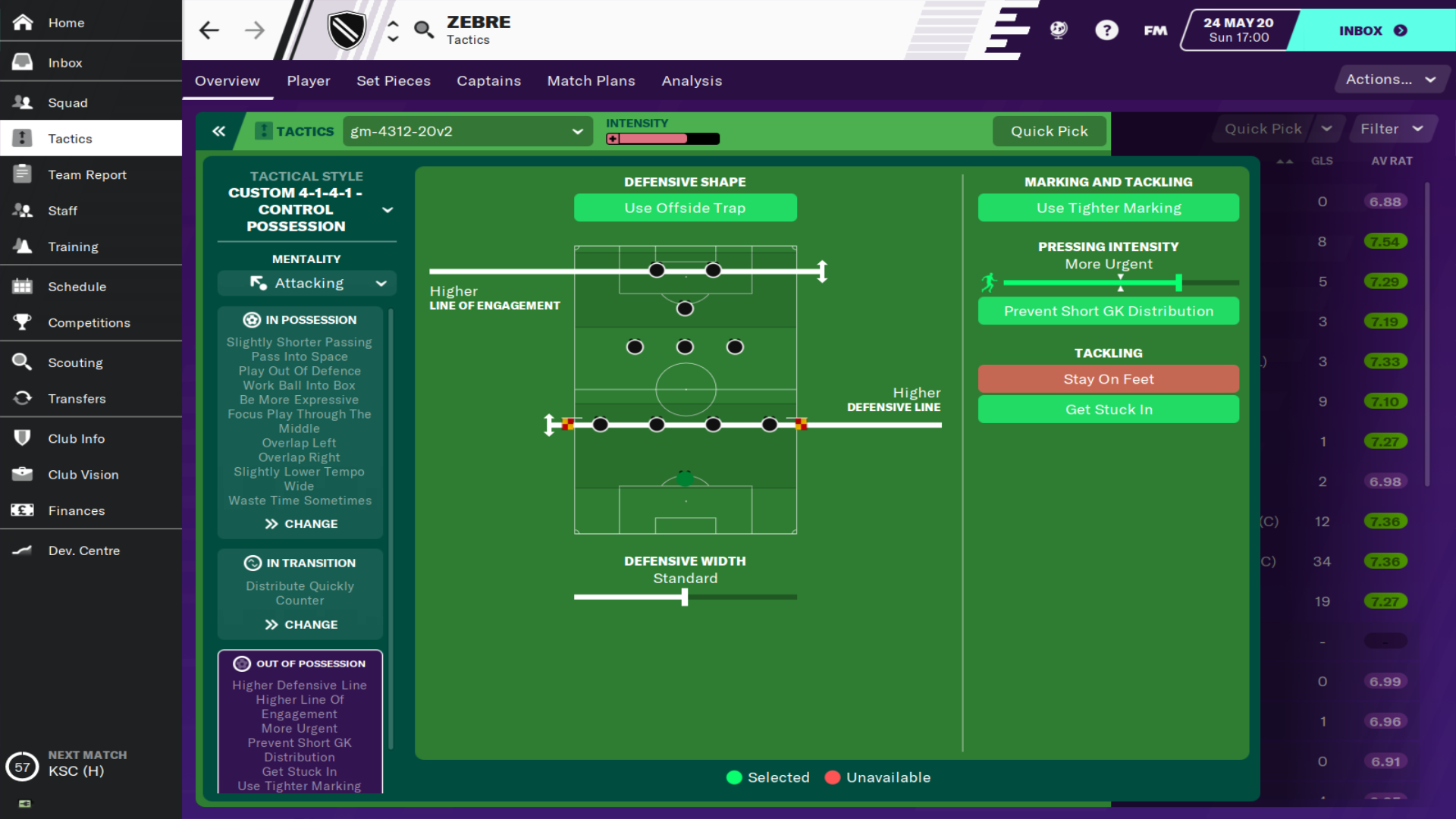 I’ve picked Zebre to test with, as they are quite well suited to play it from the off and resulted in a 50 million profit from my few transfers made. And the wingless diamond could hopefully work okay in Italy.

They may have really ageing players in the centre of midfield, but will have a strong enough base to at least compete on the domestic front. I didn’t expect to get far in the CL, and although we topped our group we lost to Real Madrid on penalties first round knockouts.

However domestically was a different story. Although very tight after the first half of the season, we were very consistent in the second half unlike the other sides.

We ended up with a 95 points total scoring 91 goals conceding 15 losing just the 3 times. Rode our luck winning the Italian Cup on penalties – unlike the ECL where we had the unluck.

Ronaldo top scored in the league with 36 goals with our right wing-back Danilo the highest average rating. You’ll also see Panic our Pirlo got the most key passes in the league too – along with penalties still bugged =)

Got a few red cards – I then revert played with one striker on complete forward on attack / PI to CD the only changes which worked well in this scenario. 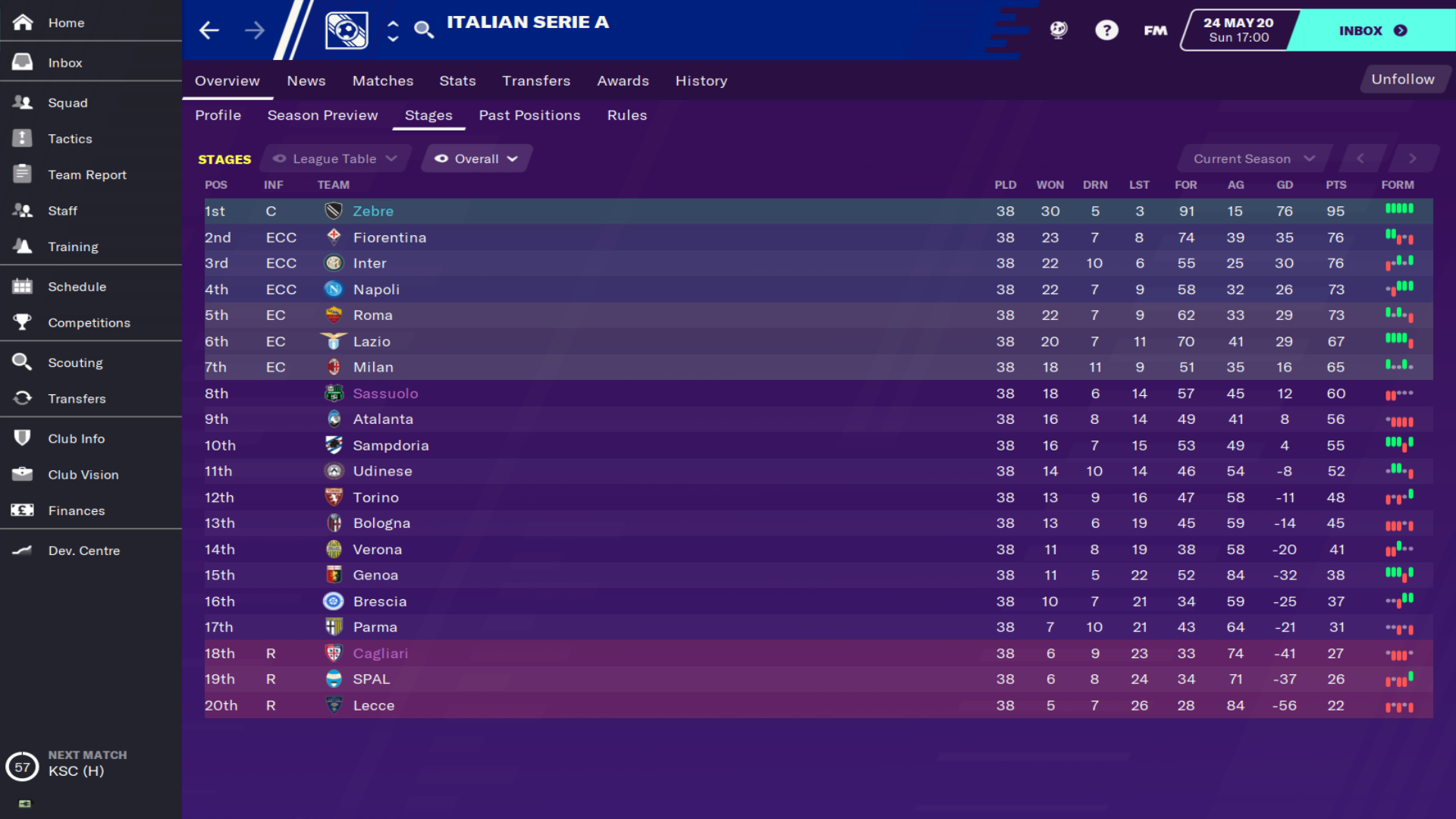 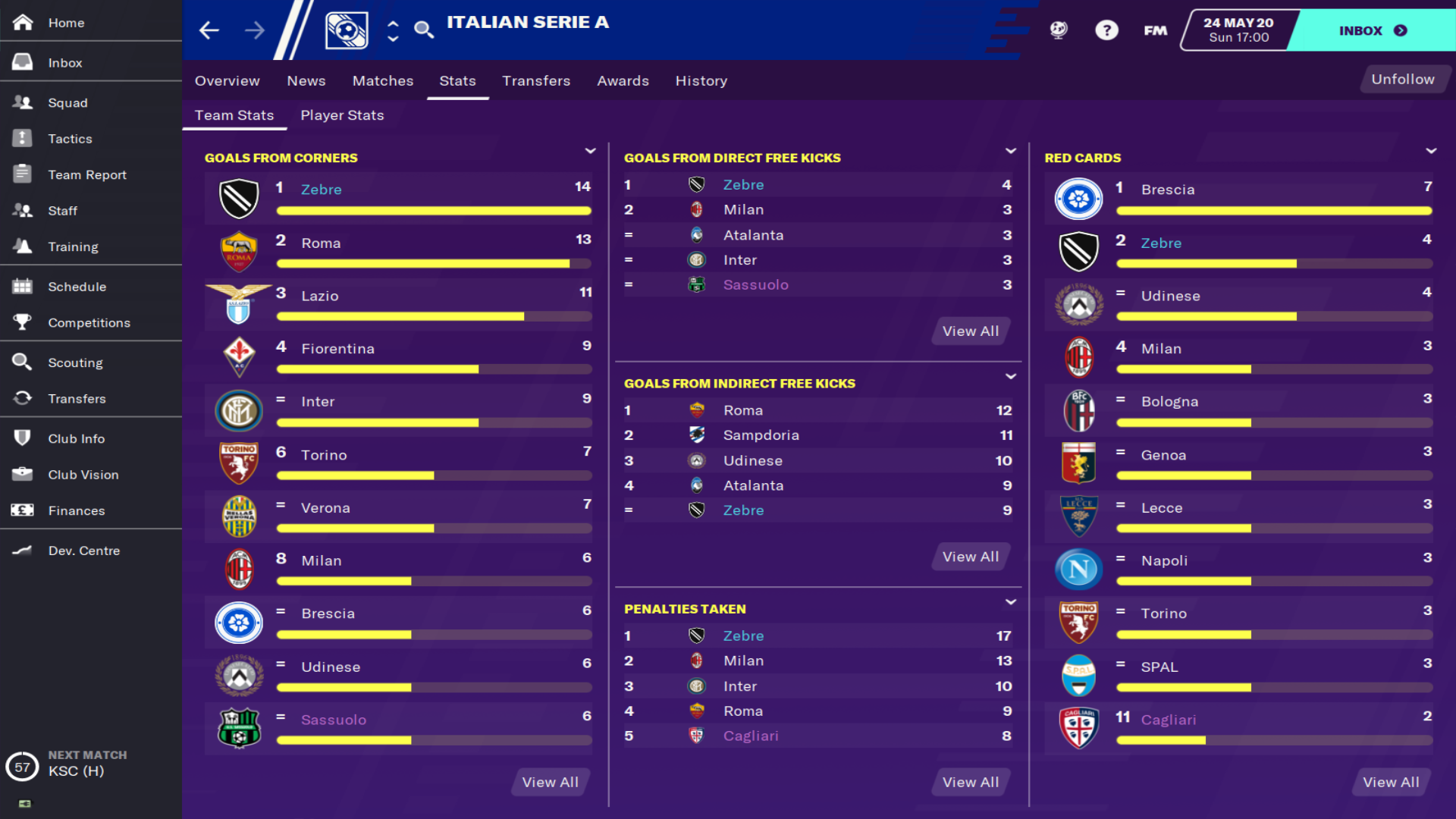 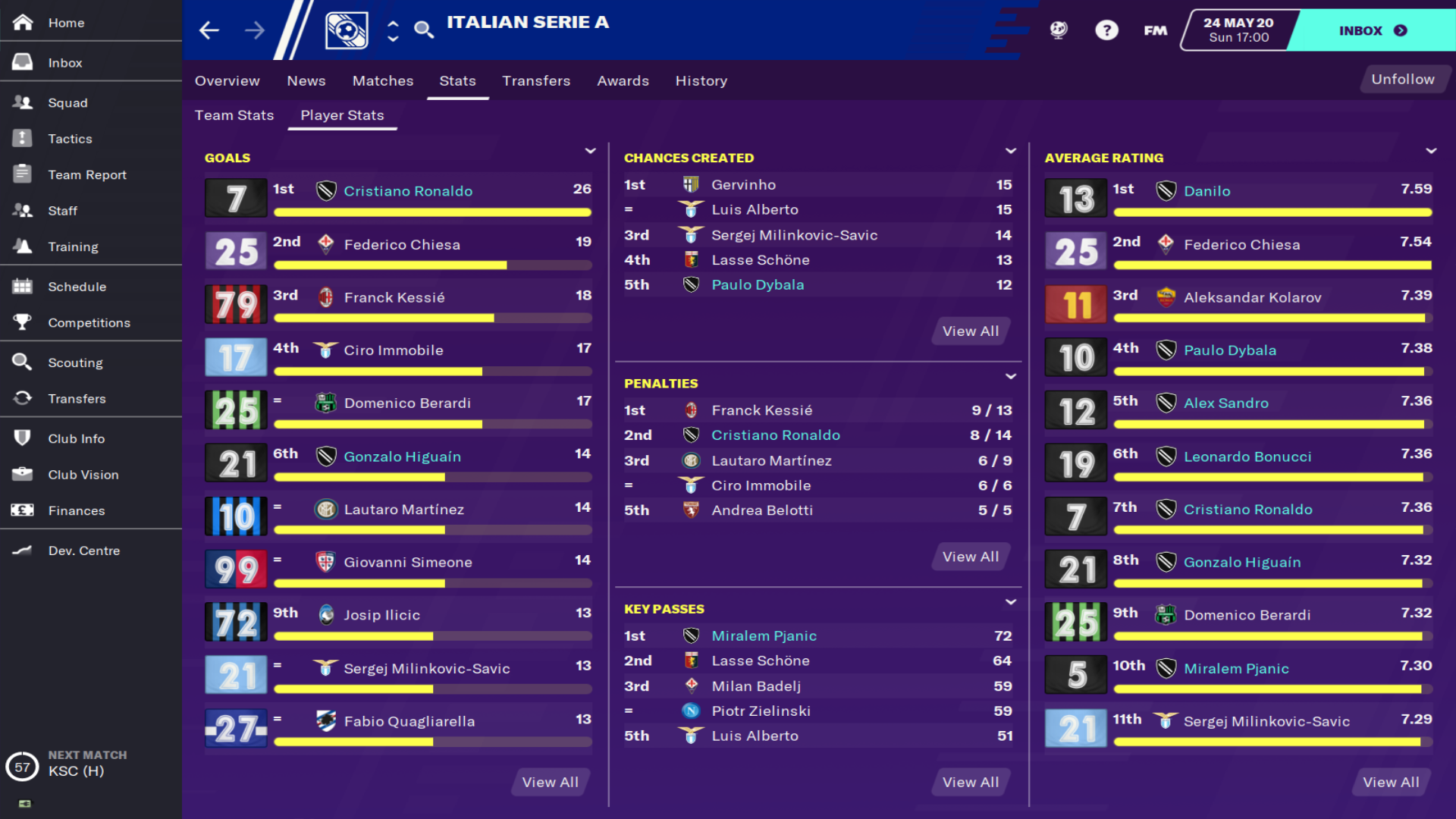 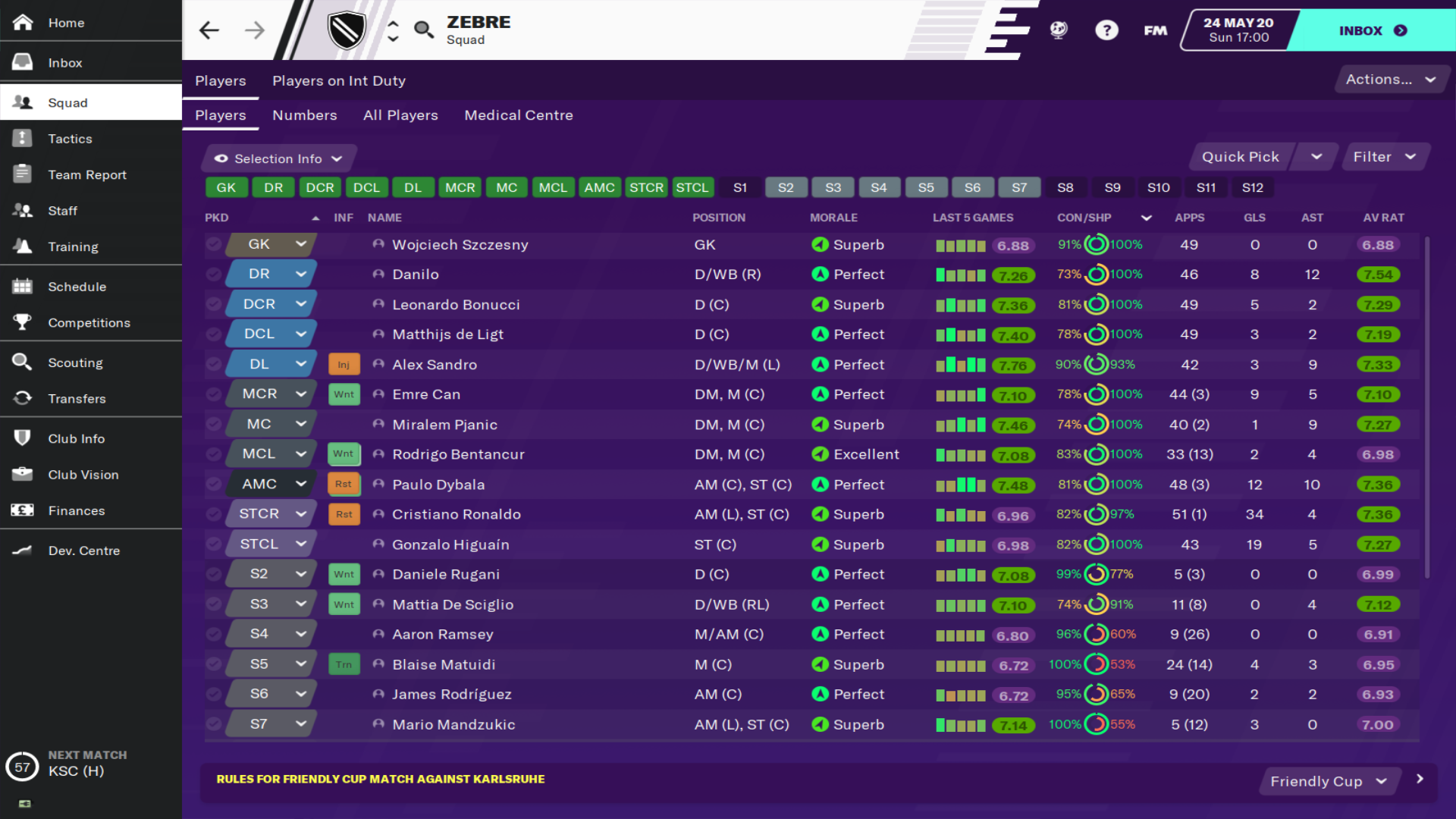 Well I don’t know how many diamonds are out there, but this was one I had to create and is one for the oldskool diamond lover. And as always, any non-exploit tweak ideas w/results appreciated.