Following a request to try and replicate Conte’s favoured 352 / 532 formation, admittedly I’ve only seen him manage Chelsea with close eyes. But given his popularity I thought I’d give it a go.

I firstly saw a video on youtube that explained how this year’s Inter were playing in brief.

-Inter use wing-backs both looking to greatly attack the opposition

-A deep lying playmaker will dictate the play from the central midfield position, dropping deep to collect the ball from the centre-backs

-The option of the direct ball is used, with one of the defenders capable of playing those riskier longer balls

So here’s the roles I have chosen for Inter whom I chose to test with: 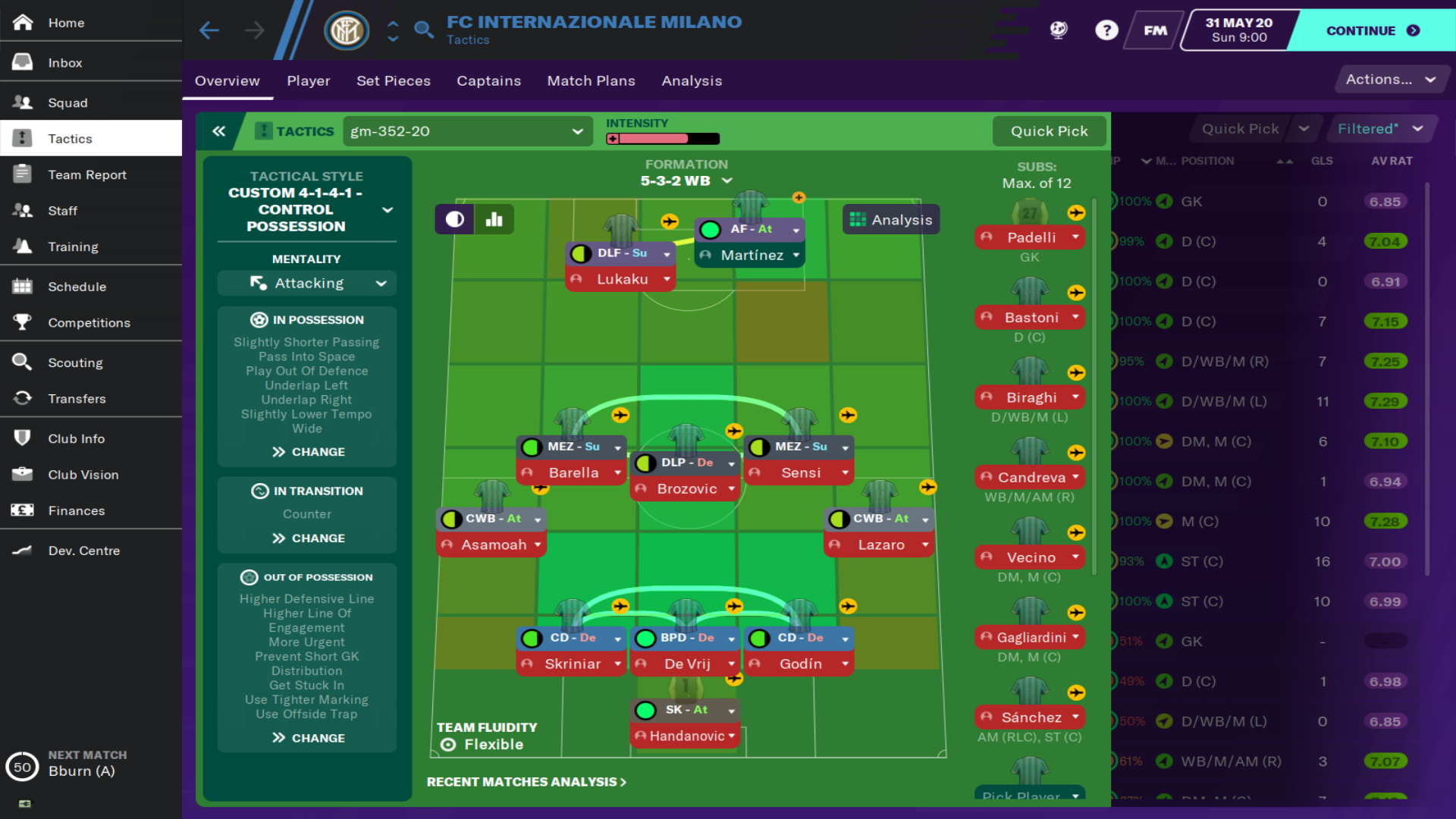 One thing I wasn’t sure of is how Inter tend to generally press and defend. So I chose to watch Inter’s game vs Barcelona in their must win home match to quality.

Inter were very unlucky not to win that game, but contrary to Conte being a more pragmatic coach, Inter were actually attacking in this game.

They pressed with great urgency, high up the pitch and with a high defensive line. Naturally Barca with their possession game would force them back, but the plan was to go on the offensive.

There were several times Inter would play the direct ball when more prudent to do so. But generally their approach play was at a slow tempo, shorter passing, with the keeper looking to adhere to this approach but would use a range of distribution when wise to do so.

So given this was the game I saw Inter @ work along with the video that clearly indicated the way they generally looked to bring about their offensive game to the opponents, I’ve designed this tactic based on these two sources combined. An attacking mentality, high loe / pressing, but with the generally shorter passing and slower tempo game

No transfers were made in this save.

After a beat of tweaking during the year, I settled on something a little before the half-way point of the season. In contention for the Scudetto, we had an excellent second half of the season which brought home the spoils – including a 3-0 demolition vs Juventus at home whom we completely dominated in this game, and also won 1-0 at their place to do the double of them.

Just like Conte’s team, we were solid defensively with by far the best defensive record in the league conceding only 12 goals.

Not the most free scoring, but still amassed a good number of goals that will not prevent us from becoming draw specialists that could have been so with a more negative approach. We notched up 70, leaving us with a +58 goal difference.

Although we failed in the Coppa, we won the ECL beating Man City in the final 2-0. Punching above our weight, we had more shots at goal and had 4 CCC vs their 0 which shows the system is very capable against sides that do like to attack. 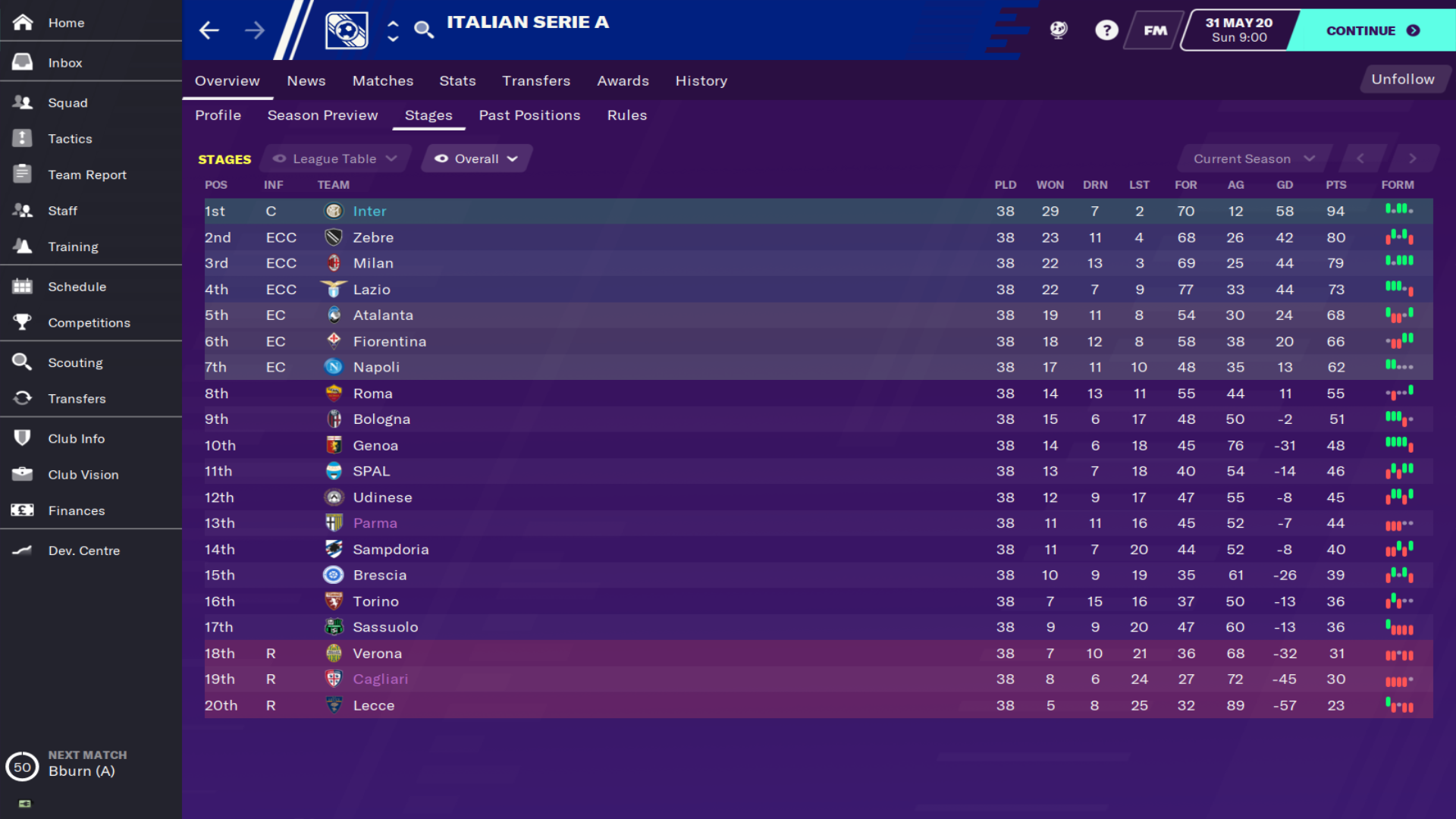 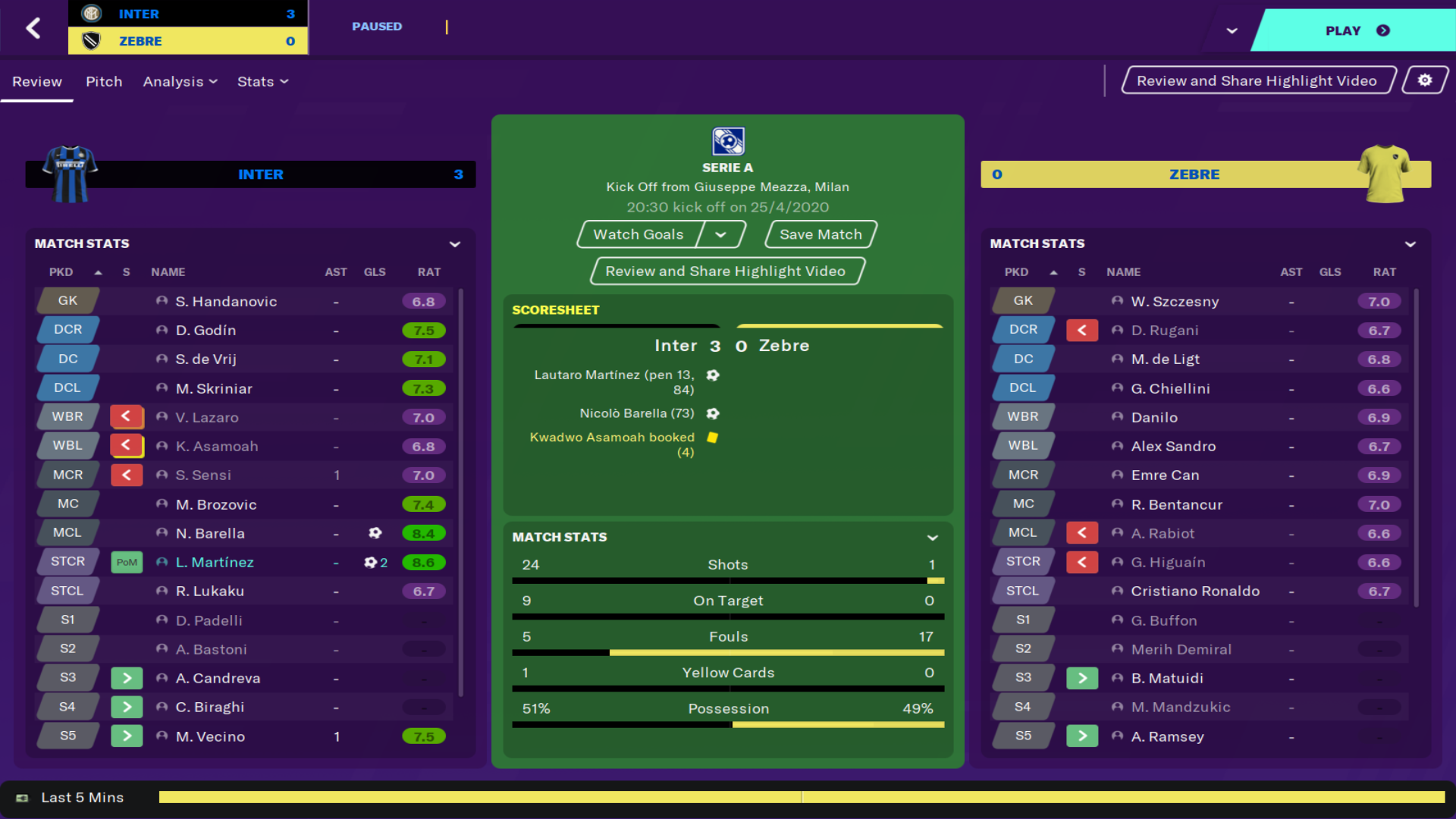 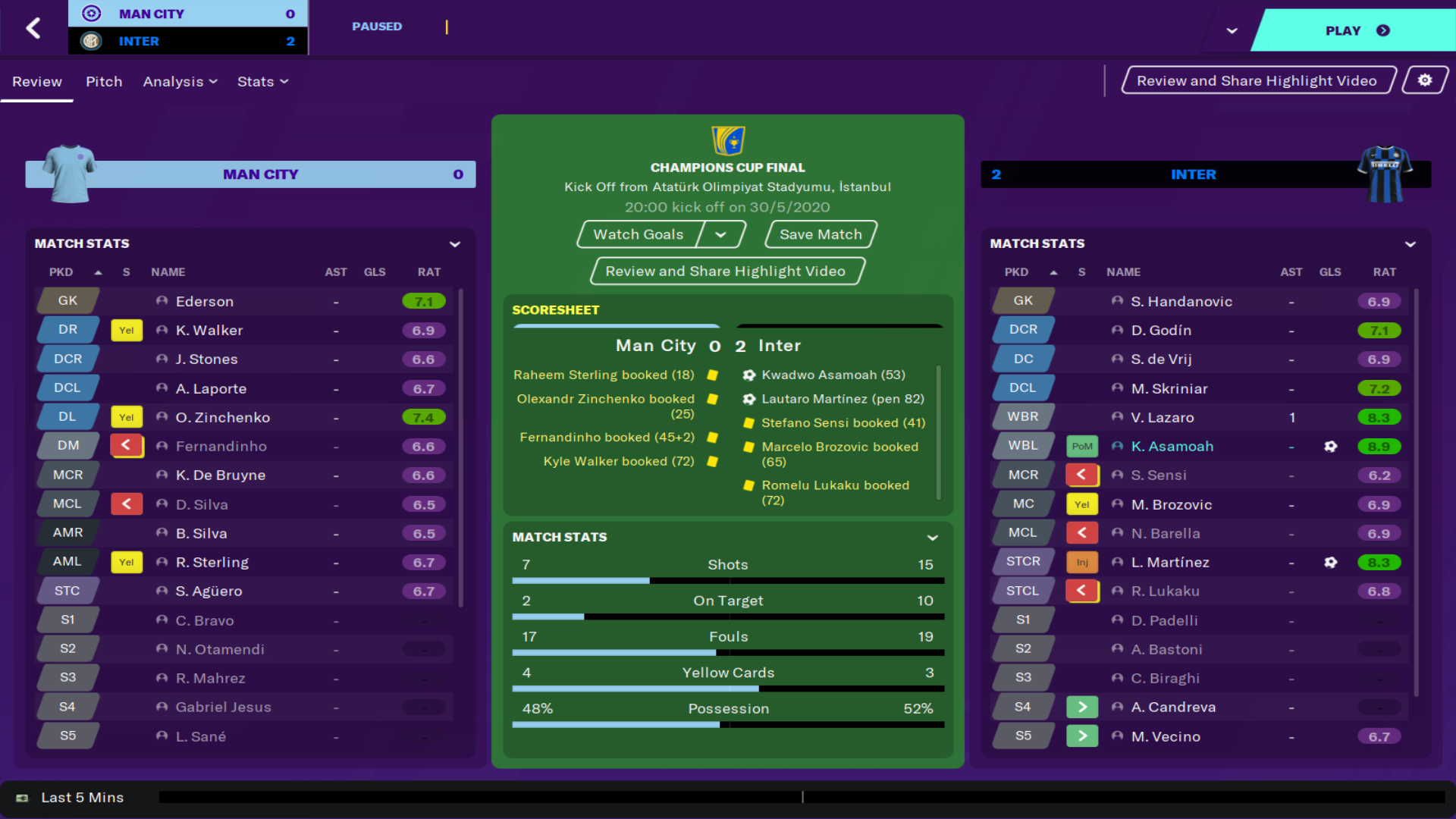 I don’t know generally how Conte approaches all of his games. But he seems to be a coach that will adapt to the opponents and the needs. So this is my version of his offensive minded 352, probably in use for games where sides park the bus against them, or they’re in need of goals.

It’s got a good balance of aiming to attack the opposition, but in a slower / patient manner that gives the chance to work the overloads to good effect. And the football is actually very fluid to watch at times.

As a tactic given it’s solid, quite balanced overall and scores a decent number of goals this should be quite durable and work with a number of sides. Just make sure you’ve got players to suit the roles, and have a hard working side to pull this system off.
Reactions: bonio782 and Babemocni1988